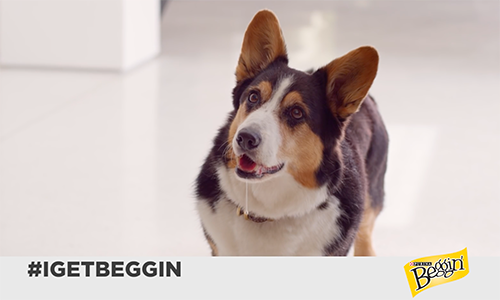 Beggin' came to us with a successful YouTube music video of a Corgi rapping about his passion for bacon and Beggin' Party Poppers treats that had been tested online, with a 30-second TV slot they had secured during the 2015 Grammys. Our challenge was to level up this hilarious piece of content to build brand equity and awareness during a highly anticipated, celebrated and talked about televised event. We had to figure out how to stand out as a dog treats brand amongst countless brands and personalities that were firmly entrenched in the music world.

It wasn't enough to turn the YouTube video into a 30 second commercial. In order to truly steal some of the Grammys spotlight, we had to dive deep into the behaviors of our online dog lovers and Grammys fans, in order to earn credibility in this space.

While celebrity and Internet culture can be impersonal and create a sense of distance, the personal details - whether it's the gossip around which artists have beef with each other or knowing the favorite toy of an internet famous Pug - create a sense of being part of the club, an insider.

With this insight, we crafted a social campaign around a 30-second TV spot cut from the YouTube video that brought to life dogs' love for bacon as well as the behaviors of Grammys fans before, during, and after Music's Biggest Night®. And, we gave the Corgi star of the music video a story, which manifested on social. On February 8th, 2015, Boss the Corgi, in conjunction with Beggin', released his first ever nationally televised single, I Get Beggin', during the Grammys.

The campaign was orchestrated to emulate what any up and coming artist might experience. We had Boss take over Beggin's social accounts (Instagram, Facebook, Twitter, YouTube, and Tumblr) on the days surrounding the Grammys so his fans could get to know him. We created an entertaining series of Corgi gifs and released Boss' "Contract Rider," stipulating the number of ripples he demanded from each Beggin' Strip in his dressing room.

We worked with rappers, like T.I. and TPain, to give us credibility within the music scene by having them tweet about the TV spot. We collaborated with creators like Destorm Power on Vine and The Fine Bros on YouTube who took our content to use on their own channels. We enlisted the influence of internet famous pups like Menswear Dog, Dogs of Instagram, and Loki the Corgi to share their excitement for one of their own making a national musical debut, while getting them to encourage their followers to be on the lookout for the 30 second TV spot.

After the spot aired, we leveraged Facebook's sophisticated targeting and reach capabilities to create paid ads with one clear call to action: to watch the full video on YouTube.

Finally, in mirroring the experience of a true Grammy artist, we partnered with celebrity channels on YouTube (e.g. Good Mythical Morning, What's Trending) in order to join the post-Grammys recap conversation and keep the chatter around Boss the Corgi alive.

In less than a week, the campaign generated a 46% lift in brand awareness versus a 38% CPG benchmark. Our hashtag, #IGetBeggin trended worldwide right after the commercial aired. We saw a 76% in ad recall versus a 40% CPG benchmark. Our reputation equity increased due to the scale of the campaign and our shareable social content. The campaign garnered 125M impressions across paid, owned, and earned on top of driving 1.76M video views.

But perhaps the greatest achievement of all was hearing the internet tout our commercial as the best rap performance of the 2015 Grammys.

Video for I Get Beggin' 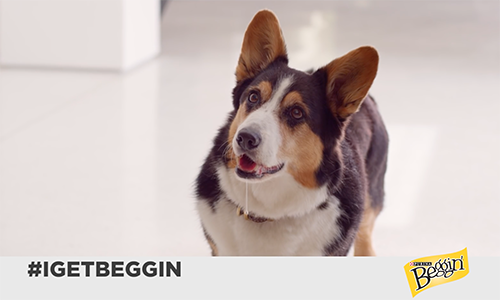