The Lowe's #TapThruHowTo campaign extends the brand's success in providing entertaining and useful Vines that help people with their home improvement projects.

Use Vine's native "tap to pause" functionality to expand time. A 6 second Vine no longer has to be limited to just 6 seconds. It can show all of the steps in a complex home improvement project by allowing people to "Tap Thru" each of the steps in a project by playing and pausing the Vine.

By pushing the boundaries of what could be done in 6 seconds, Lowe's created the next evolution of the How-To video. Consumers loved this new approach to How-To with Vine: the first 3 Tap Thru projects were viewed over 1MM times, liked over 20,000 times, and revined almost 1,700 times.

You can view all of Lowe's Vines at https://vine.co/Lowes

Lowe's joined Vine in May 2013, about 4 months after it launched. We believed the growth in short-form mobile video was about to become mainstream and the creative constraints of Vine intrigued us. We liked the idea of needing to tell incredibly concise brand stories in just 6 seconds- it would force us to have a sharp point and get to it quickly.

At that time, Vine was mostly being used by brands to create one-off curiosities as they experimented on the platform. And while entertainment is a cornerstone for a lot of successful content, we knew that we could deliver more value to our audience by combining entertainment + utility in these very short videos.

The #LowesFixinSix campaign was the first effort from Lowe's on Vine: snackable video "lifehacks" that provide smart, simple solutions for common issues around the home.

#LowesFixinSix was instantly a hit and well recognized by both creative award shows and industry press. But consumers were the ones who made it clear we had cracked the code on Vine because of how much they watched and liked and commented and shared the Vines across other social media platforms.

The Tap Thru campaign broadened our approach- in addition to providing tips that solve relatable inconveniences around the home, we're now helping people to do larger, more complex projects. Suddenly, in just 6 seconds, we can show people that what might be considered a daunting or difficult project is actually straightforward and easy to achieve with Lowe's help.

Connecting with people 6 Seconds at a time

Each campaign from Lowe's on Vine lives up to the same core belief and strategy: create Vines that combine entertainment and utility. Innovate. Find new ways to connect with consumers in short-form video.

Overall, Lowe's has produced over 90 Vines across several campaigns and people have viewed them more than 33MM times to date. That's more than 56,000 hours spent with the brand, or more than 6 years of content, viewed 6 seconds at a time. 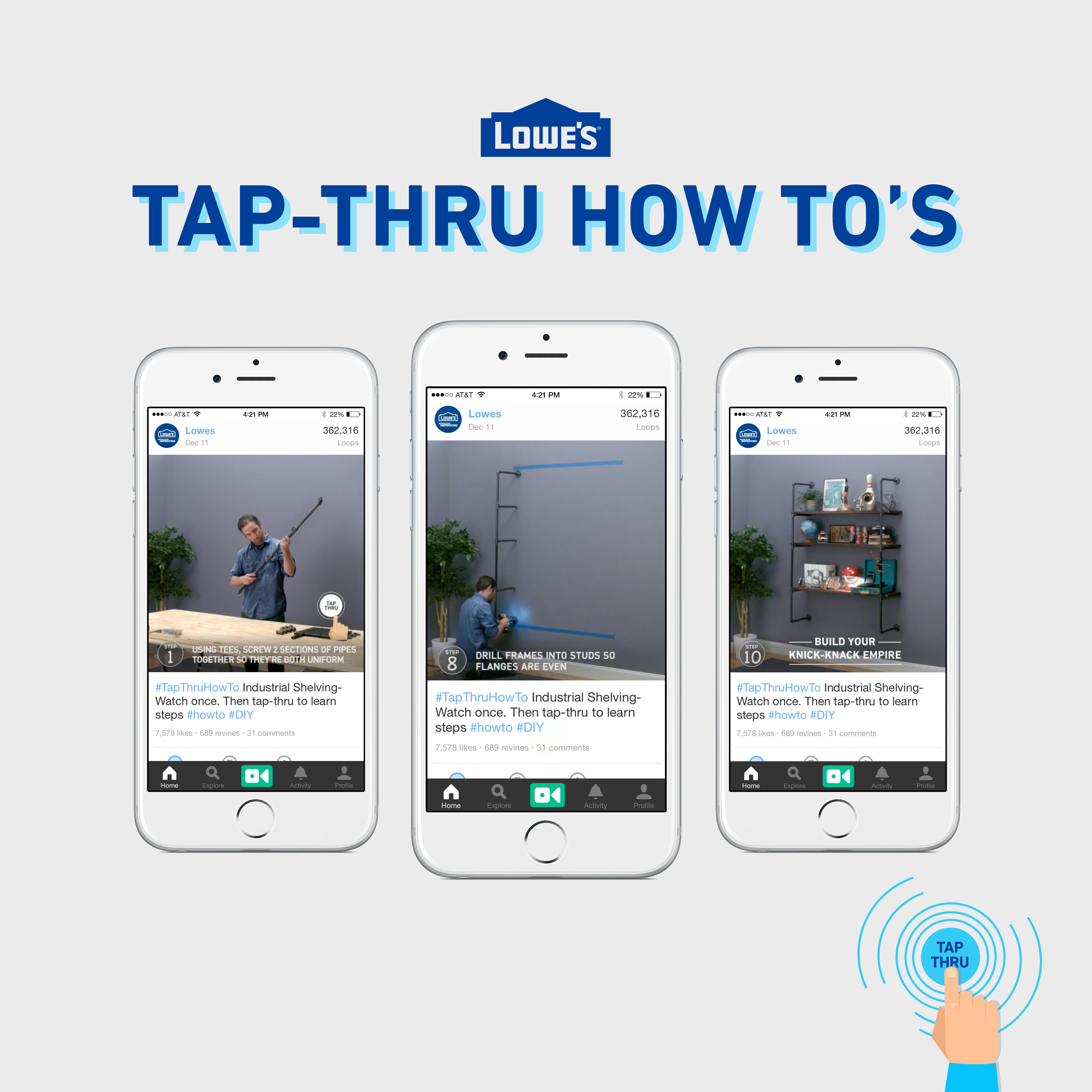