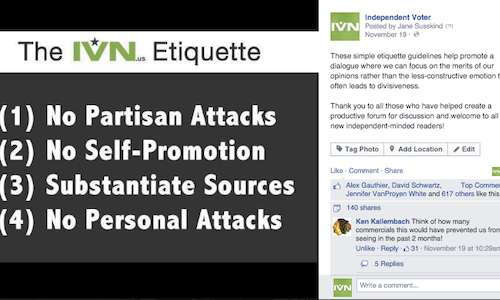 The Independent Voter Network is a non-partisan, non-profit platform for unfiltered political news and policy analysis from independent-minded authors. IVN believes that traditional media, in large part, has encouraged the polarization of our political process by sensationalizing headlines and reducing the dialogue to a "left v. right" mentality.

To encourage writers and readers of differing political tendencies to engage in a constructive dialogue, we have developed and enforce a set of etiquette guidelines: (1) No Partisan Attacks, (2) No Self-Promotion, (3) Substantiate Claims, (4) No Personal Attacks. By holding participants on our Facebook Page to these standards of civil discourse, we have created a truly unique online community built upon trust.

We utilize social media, Facebook specifically, to promote civil discourse. We spread our message to our fans and their friends, growing our page to over 100,000 Likes to promote IVN's mission.

Our "Talking About" number rivals that of mainstream media pages, well-funded organizations, and even outperforms the Republican and Democratic parties on Facebook. In the week leading up to the 2014 election, there were over 53,000 engagements on our page - over ten times more than competing pages. (See Image 1)

We frame each post with the intent to shape a substantive conversation, encouraging a back-and-forth between users by entering the conversation when appropriate. As a result, our Facebook Page reaches over 1 million people a week.

IVN is committed to the belief that democracy functions best when the most people participate. Today's political climate discourages such a participatory democracy. This is evidenced by the fact that current congressional approval rating in 2014 averaged just 14%. Trust in the news media is under 40%. And, most importantly, voters are fleeing the parties in record numbers, with more than 40% of Americans identifying as independent voters.

The objective of our Facebook Page is to disseminate the news we publish on IVN.us in creative and innovative ways that encourage users to once again engage in civil political discourse, rather than the more divisive discussions that occur on other news sites.

The IVN Facebook Page has grown to over 102,000 Likes and reaches over 1 million online users a week within an extremely limited budget. We do not, however, measure the success of our efforts on "Likes" alone. It is our belief that social media success should be evaluated on a quality over quantity basis. Our success in creating a space online for disenchanted voters to once again have a voice is made evident in the type of conversations fostered on our Facebook Page. (See Image 2)

IVN's reputation, credibility, and status as a news source are preserved through its adherence to a published etiquette. Our etiquette guidelines are simple: 1) No Partisan Attacks, (2) No Self-Promotion, (3) Substantiate Claims, (4) No Personal Attacks.

All people participating on our Facebook Page are bound by the etiquette, something we remind them of at least once a week. (See Image 3) In order to enforce these guidelines, a member of our team actively monitors comments, responding to those who break these guidelines with substantive feedback and removing repeat offenders. Thus, the types of conversations we foster on any given Facebook Post are rational, fact-based, and solutions oriented.

In order to foster such conversations on the IVN Facebook Page, IVN has a devoted staff who actively design graphics for the page, post unique content from IVN.us, and ask relevant questions often overlooked by traditional media. Our team stays updated on the latest changes in the Facebook Advertising Platform to maximize the outcome of our advertising strategies. We don't pay for likes and engagement outside the Facebook Advertising platform, guaranteeing that our likes are real people with a real interest in civil discourse.

Because of IVN's focus on fostering an active and engaged community online, IVN Facebook Posts received dramatically higher levels of engagement than comparable pages for the 2014 Election Cycle. (See Image 4)

When compared to the Pages of similar statewide and national news sources, IVN News came in first in terms of engagement as measured by Facebook's critical "Talking About This" metric. (See Image 1)

Given this year's highly polarized political climate, we paid close attention to how we framed each article and Facebook Post, focusing on cultivating a civil and substantive discussion in clear contrast to most of the mainstream media's coverage of the election. When compared to traditional media Facebook Pages, where users tend to comment with partisan and personal attacks, the comments on IVN Facebook Posts consist of substantive responses, back-and-forth dialogue between users, and rational commentary.

Our long-term approach has resulted in an extremely high level of substantive conversation and discussion originating from our Facebook Page, with 537,773 'stories' being created about the IVN Page from users in the month leading up to the election. What this means is that our content acted as a catalyst for over half a million actions - in the form of comments, likes, or shares - on Facebook.

While other news sources resort to sensationalized click-bait journalism, we believe this approach merely perpetuates the problem and further disenfranchises Americans from the democratic process. Instead, IVN is dedicated to publishing thought-provoking news from independent-minded authors, bound only by a simple etiquette. 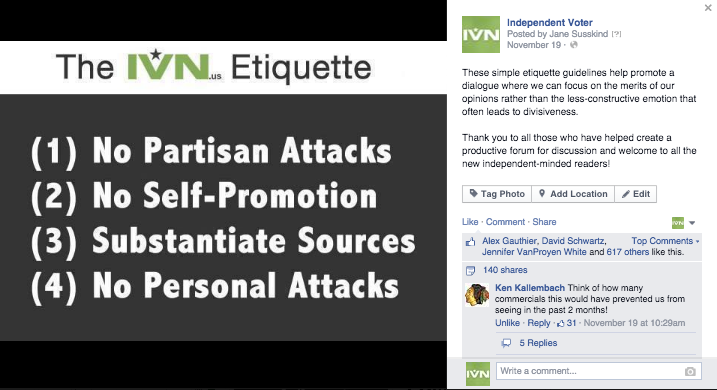 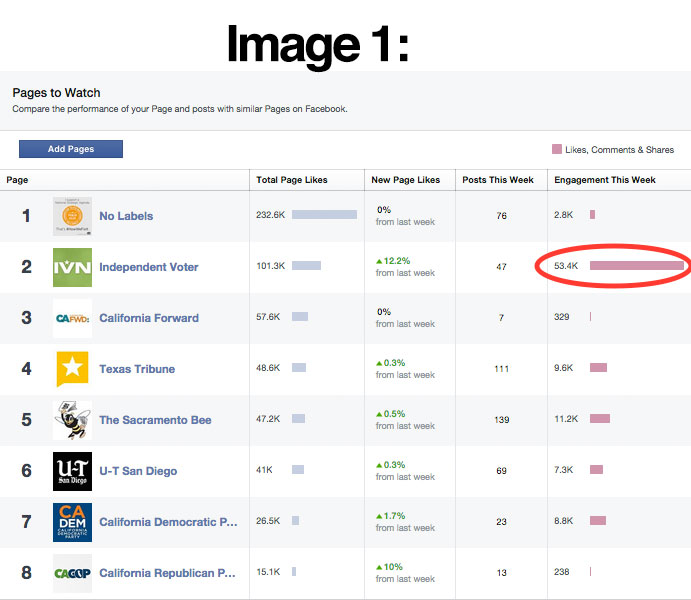 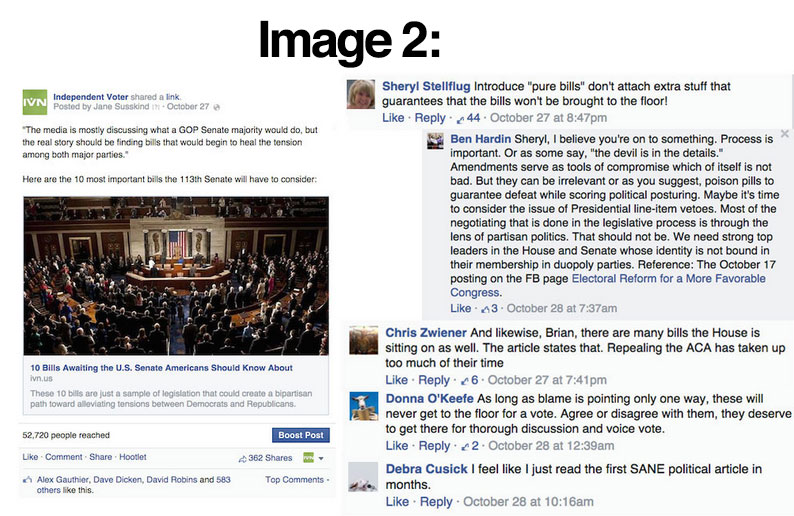 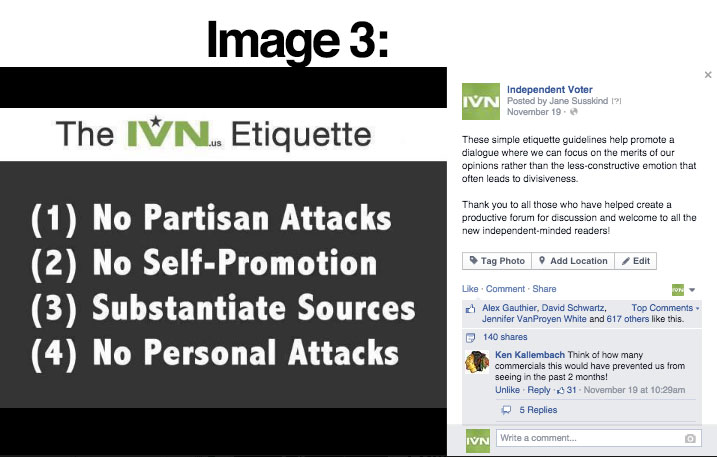 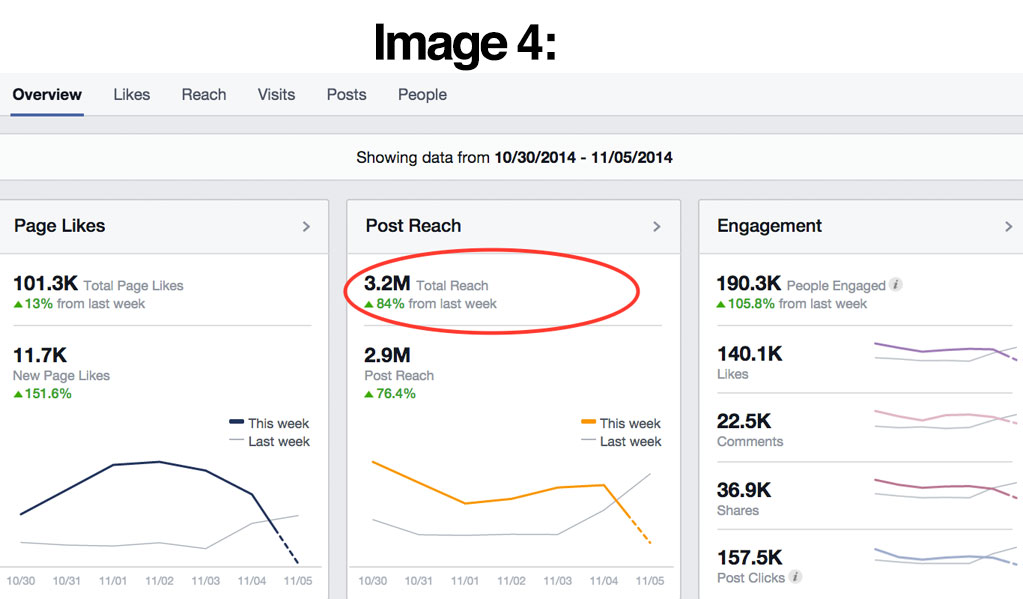