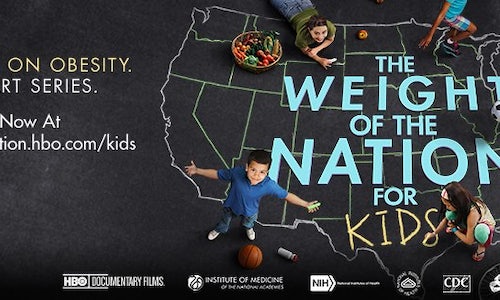 Weight of the Nation for Kids

Entered in Health and Fitness

HBO Documentary Films and The Institute of Medicine (IOM), in association with the Centers for Disease Control and Prevention (CDC) and the National Institutes of Health (NIH), and in partnership with the Michael & Susan Dell Foundation and Kaiser Permanente, produced an important and timely documentary film series, The Weight of the Nation, about combating the obesity epidemic in America. As part of this series, three films were produced around kids as a way to talk to parents about the issue.

In order to raise awareness for the cause on social media, GLOW and HBO, with guidance from these partners, built a robust social content strategy that succeeded in translating the film series' messages to social media targeted to parents about their kids and at the same time, kid friendly so parents could share with their children.

HBO and GLOW identified content from the films, such as helpful tips and bite-sized facts, and created eye-catching, illustrated factoids that encouraged sharing and discussion among adults and kids alike. With the help of parents, teachers, and community leaders who joined the cause, together we built out The Weight Of The Nation For Kids Facebook and Twitter presences and became a voice within the health, diet and fitness communities by participating in weekly Twitter chats with thought leaders and influencers in the space.

The Weight of the Nation project is an ongoing public health campaign designed to accelerate efforts and help shift behaviors to prevent and eliminate obesity across the United States. It is a comprehensive public health awareness and educational engagement campaign that has catalyzed efforts across the country to combat obesity and improve health outcomes.

With such major and respected auspices behind it giving the project authoritative heft, the Weight of the Nation for Kids series was part of this larger campaign whose mission was to provide steps individuals, communities and organizations can take to help improve their health and the health of their families; as well as inspiration and tools to help them become "health activists" at home, in their neighborhoods and in communities.

To support those goals, the social campaign was designed to appeal to parents about their kids, with the visuals and messaging optimized so parents could comfortably share with their children. The creative was friendly, accessible and where appropriate, fun—not fear inducing, critical or daunting. Whether it was imparting an interesting fact ("More than 40% of our food intake comes from 10 types of foods"), giving an easy-to-execute tip ("Have a sit-up competition with your kids while watching TV") or alerting followers and fans about special events, such as Twitter chats hosted by the team behind the documentary and the CDC, the extensive series of graphics had a hand-made quality of chalkboard drawings. With simple, clear but powerful messages and information, they also encouraged sharing on Facebook and Twitter. These social platforms also allowed us to distribute free screening kits, recognize "ambassadors" and solicit personal stories.

•Monthly average retweets increased by over 1800%

HBO and GLOW's campaign for The Weight of the Nation For Kids documentary series not only showcases best practices for use of social media in this category, it also is evidence of how marshaling the power of these platforms can be leveraged to get out important messages to an audience that can use it who in turn will share out to others who could benefit by it.