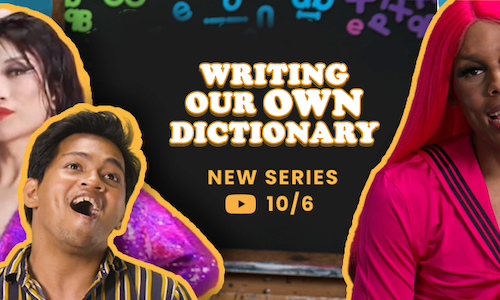 Writing Our Own Dictionary

Writing Our Own Dictionary is a 4-part compelling, entertaining and informative web series where we hear first-hand from LGBTQ+ folks about what their labels (or lack thereof) means to them. Episodes include: Non-Binary People Describe their Gender Journey, What Being Trans Means, Let's Define Bisexuality and Pansexuality, and How Do You Present to the World.

Young queer and questioning people will turn to this webseries when they are too afraid or have no reliable resources to turn to for advice and support, whether they are exploring their own identity or want to support someone in their life. Folks should leave the series with a deeper understanding of identity labels (and their application), and young queer people should also feel validated with the understanding that they are not alone on their sexual orientation and gender identity journey.

The primary audience are teens 13-18 who are somewhere along their sexual orientation and gender identity journey with an emphasis on those questioning their labels and curious about what the spectrum of words/labels mean.

The first episode of Writing Our Own Dictionary premiered on October 6, 2021 with one episode released every following week. Prior to its launch, our social media platforms were branded with content-specific social headers and profile pictures. We also released social media graphics that defined the terms included in the content series.

We then released a full trailer for the series on September 29th with short snippets of each episode, that appeared on YouTube, our website, FB, Twitter, and Instagram. On TikTok, we used behind-the-scenes footage from the set that featured the talent speaking directly to camera.

Before each episode released, we published episode trailers to gain momentum for the next release. We also designed merch to accompany two of the episodes within the series. The first merch item included an enamel pin while the other included prints and crewnecks describing gender.

After the release of all four episodes, we implemented a paid media strategy to target our demographic while also sharing the episodes with local schools in LA County. The paid media strategy included driving traffic to our main blog post that included an eduguide for educators to work with students on continued learning. It Gets Better's Education Coordinator traveled to local schools to showcase the episodes and to foster in-depth conversations.

Across platforms, Writing Our Own Dictionary garnered over 3.8 million impressions with 24,000 click-through rate. The campaign reached over 1.9 million unique viewers which prompted a total of 800,000 comments, views, likes, and shares.

The top episode topics included the non-binary and trans episodes which held a clickthough rate above 0.50%. We also saw a 15% increase in followers on TikTok and Instagram from our target demographic.

The channels which were most efficient in driving performance against our KPI’s (awareness and clicks) were Snapchat, Facebook, and TikTok.

Youtube was great at driving engagements with about 300k of the total 676k.

Video for Writing Our Own Dictionary

It Gets Better Project