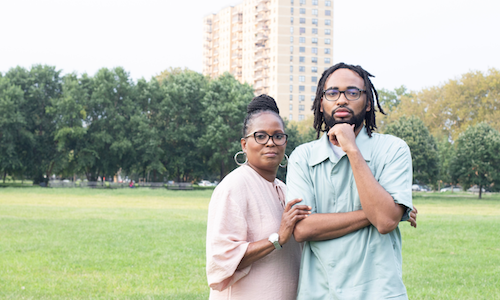 The COVID-19 pandemic has been especially destructive to communities of color, who are heavily affected by biases in the medical field and are often denied equal access to healthcare. In 2021, the New York City Department of Health and Mental Hygiene reported that only 25 percent of Black men between the ages of 18-44 living in NYC were fully vaccinated against COVID-19.

Bronx Health REACH’s research and outreach teams talked with young Black and Latino men and their mothers about their COVID-19 vaccine concerns. We found that the reasons many young men refuse to vaccinate vary widely from person to person. For some it’s their religious beliefs, while for others its questions about vaccine safety, mistrust in the government, or unfounded concerns about the side effects of the vaccine on fertility and sexual performance. Regardless of the specific reasons behind these choices, it was obvious that disinformation and misinformation was adversely affecting many aspects of the decision-making process.

Acknowledging that personal safety amongst this group may not be the demographic’s number one priority, we pivoted the campaign to connect the dangers of the COVID pandemic to the one person in their lives they might care most about: their mothers. As many Bronx households are matriarchically aligned, and the very real threat of serious illness or death affects older populations the most, the campaign showed that, regardless of personal choice or personal beliefs, getting vaccinated for the people in your life you care about most is always a good decision.

A bilingual, portrait-based campaign was created to raise vaccination rates among New York’s lowest-vaccinated population through a culturally competent message. Utilizing an aesthetic and creative direction that would resonate organically with this demographic, F.Y. Eye commissioned Bronx-based photographer Abigail Montes to create portraits of vaccinated mothers and sons from throughout the Bronx. F.Y. Eye developed a grassroots campaign to be distributed hyper-locally throughout the Bronx on buses, palm cards, posters and throughout partners’ social media platforms.

Through a highly engaged process with Bronx Health REACH’s stakeholders, the community also expressed a shared mistrust of both the government and vaccines, especially given the systematic racism communities of color have experienced throughout history. These community listening sessions led to a specific word choice of "choose vaccination," rather than a campaign tone telling residents to “get vaccinated.” This message provides Bronx residents with the personal agency needed to make an informed decision to get vaccinated themselves.

The campaign was met with multiple challenges, including the organization’s small budget as a nonprofit organization, and the community’s distrust with the medical community. LinkNYC’s digital kiosks are on nearly every street corner of NYC and are one of the most accessible forms of advertising to low-income communities. Leveraging 100 donated screens throughout the areas of the Bronx hardest hit by the COVID-19 pandemic, the campaign ran consistently for four weeks. Bus Tail ads were placed strategically throughout the neighborhoods with higher positivity rates and lower vaccination rates throughout the Bronx, including Hunts Point, Tremont, Claremont, and Edenfield. These media placements were chosen to intersect with the target audience in their own neighborhoods, on their commutes to work, and during a variety of other daily activities. Informational distribution materials connected to the campaign were provided for the organization’s public health events, which took place in local hubs such as community centers, churches and barbershops.

Through F.Y. Eye’s relationships with media vendors, we were able to secure discounted and donated media placements localized in the South Bronx in order to reach the community, garnering over 8 million impressions over the course of the campaign. The campaign was displayed on bus tail advertisements and LinkNYC kiosks, inspiring Bronx residents to protect themselves and their families by getting vaccinated. The mother and son pairs who were photographed by Abigail Montes also championed the message themselves, spreading the word about vaccination amongst their respective communities as the “influencers” of the campaign on social media. Further assets connected to the campaign were distributed within several of Bronx Health REACH’s community events, where the organization provided free COVID testing and safety kits, as well as giving vaccines on-site.

Over the course of the month-long campaign, vaccinations of Black and Brown people in the Bronx increased by over 90,000 people. With each person who gets vaccinated, we are a step closer to our goal of a healthier Bronx that is putting COVID behind us. 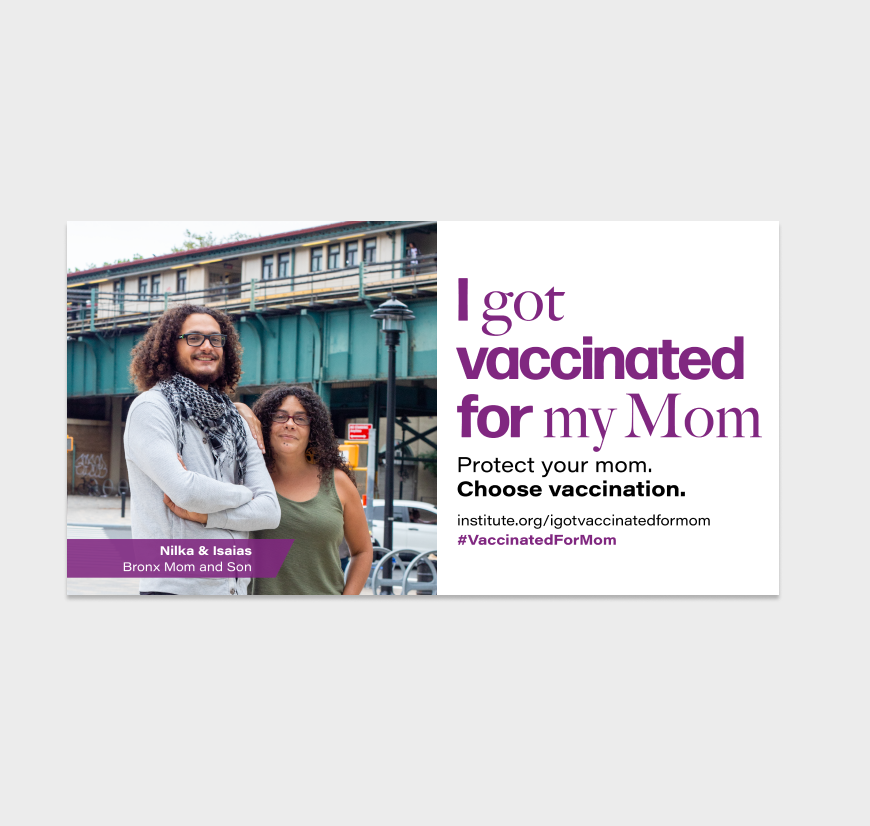 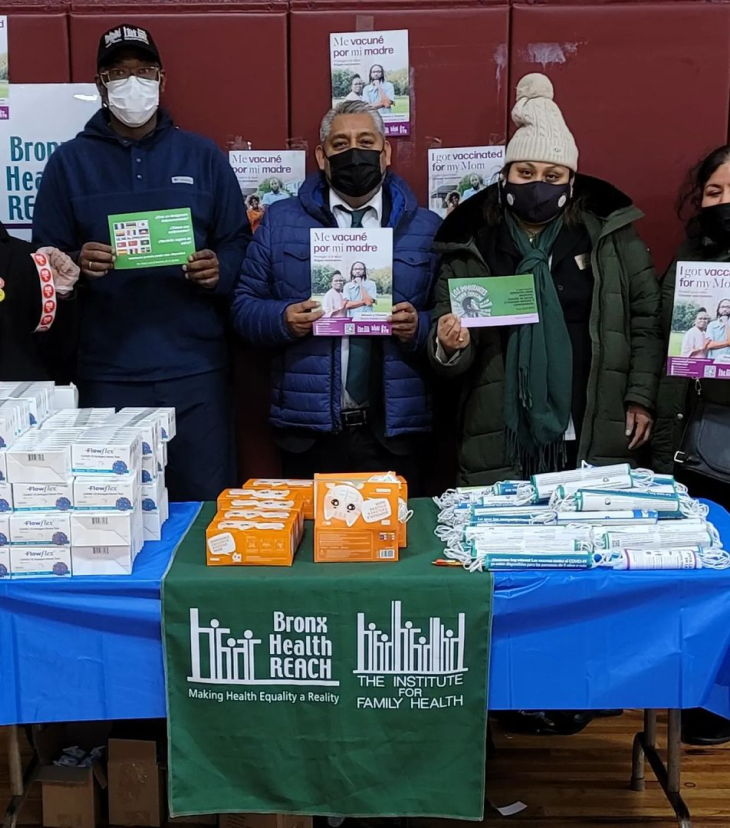 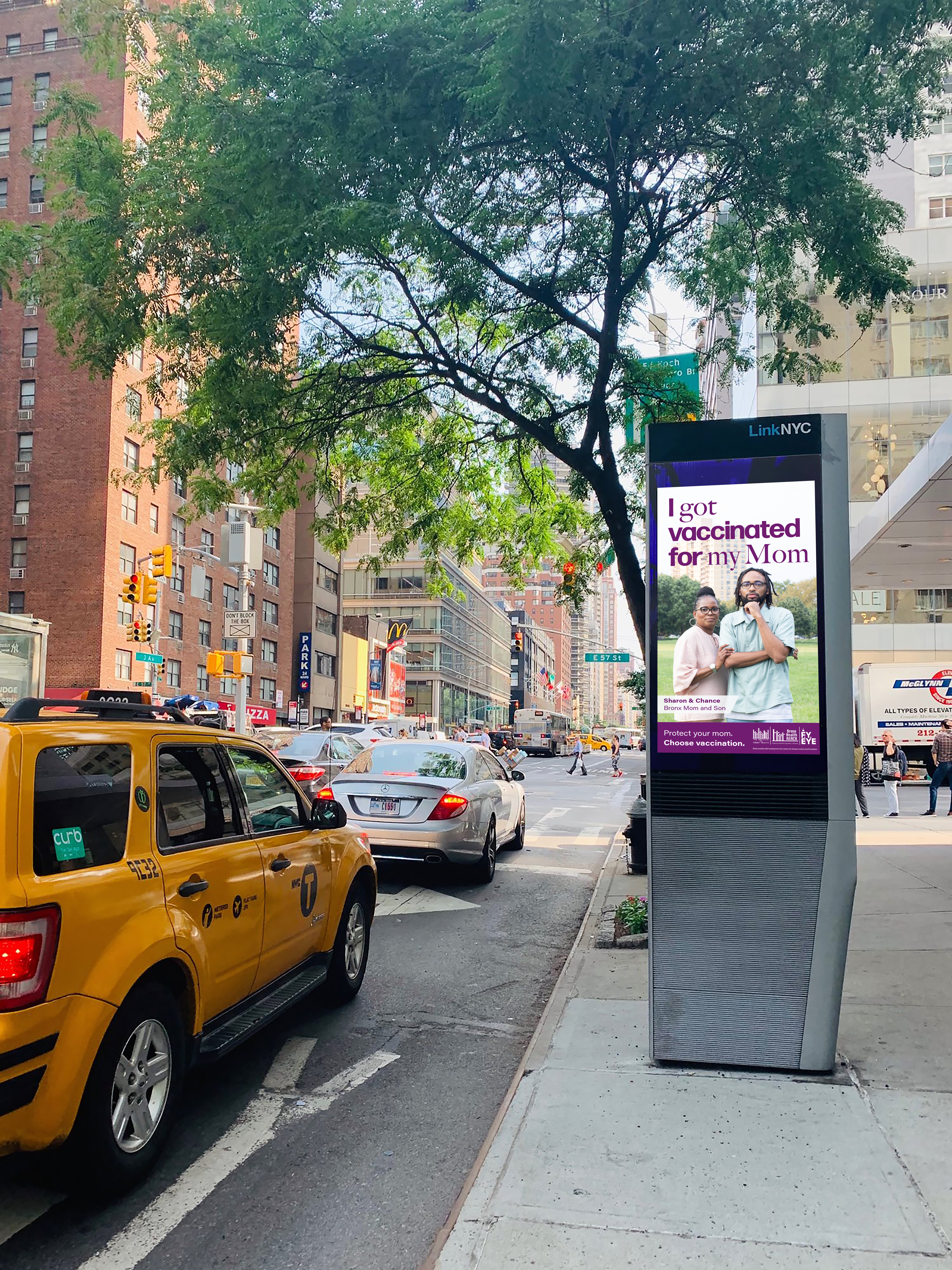