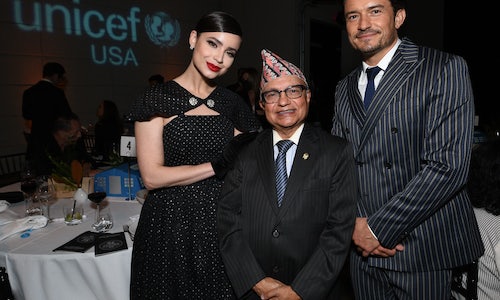 How to celebrate 75 years of one of the most impactful humanitarian organizations on earth, during a time of compounding global crises? Through a huge integrated effort focused on real impact, world class storytelling, and an inclusive approach to get supporters across the country involved. That’s how UNICEF USA celebrated 75 years since UNICEF began supporting children in the aftermath of World War II. Since then, UNICEF has saved lives, empowered futures, and supported communities before, during, and after crises and natural disasters in 190 countries and territories.

So many Americans know the name “UNICEF” but may not know what the organization does day in and day out. They may know Audrey Hepburn’s history with the organization, but not that UNICEF is vaccinating almost half of the world’s children every year. The goal was to use compelling storytelling to highlight both the history and arc of the organization, and the people being helped by UNICEF’s work today – through a narrative of global vaccine equity, made so timely over the past year because of COVID-19.

The result is “If You Have” – a moving short documentary shot around the world by Academy Award-winning director Ben Proudfoot. The documentary was “premiered” on Giving Tuesday 2021 in simultaneous national events, for supporters from coast to coast. It was then made available online for all supporters to view at home. From there, a truly once in a generation special project came to life.

When UNICEF USA set out to make a documentary to encapsulate UNICEF’s 75 years of work, it coincided with one of the most challenging periods in the organization’s history. With a global response to COVID-19 - on top of the other crises and natural disasters that UNICEF typically tackles - the team did not know if they were going to get a story to tell. Through collaboration with colleagues across 5+ countries, the under-told story of UNICEF was brought to life. Even challenging to various countries was a challenge, navigating the COVID protocols of multiple countries, and ensuring the team stayed safe. Coupled with planning hybrid online/in-person events in multiple cities - all with various regulations - it was no small feat.

Collectively, the plan centered on a few areas:

Film: After early engagement from donor executive producers, the team at Breakwater Studios traveled to Greece, Ghana, and Guatemala to collect content, hearing from people who were present at big moments in UNICEF’s history.

National celebration: As the film was being shot, plans started for a national celebration - a coast to coast gathering of UNICEF’s biggest supporters planned for one night only - Giving Tuesday - to highlight the collective power of impact and giving back, and UNICEF’s big birthday. The plan was to “premiere” the film in cities across the country simultaneously - ensuring that celebrity supports and advocates could view the film at the same time.

Following the nationwide launch, in addition to sharing with select film festivals, the film would be shared via a digital page, to ensure that everyone could learn and be inspired by this story.

Advocacy action: UNICEF doesn’t receive any UN dues - only voluntary contributions - so ensuring that Congressional audiences know about UNICEF’s work is hugely important. UNICEF USA partnered  with Sen. Coon’s office on a Senate resolution recognizing the anniversary, introduced with Sen. Collins - S. Res. 458. And, UNICEF USA worked with House Rep. Jacobs on a resolution calling on the US and international donors to prioritize children in COVID-19 rebuilding efforts.

Partners: Corporate and other partners were engaged via a Global Forum for Children and Youth - a gathering centered on reaffirming commitments to children and highlighting youth voices.

Clubs/youth advocates - Getting young advocates involved is key. UNICEF USA provided digital toolkits, with resources for them to host their own screening of the film, with friends, classmates and neighbors.

All of these diverse actions were driven in parallel, supported by social media posts from UNICEF USA, Breakwater Studios, and key supporters.

The Giving Tuesday 2021 event - UNICEF @ 75 - was the largest global fundraising event for UNICEF, raising a record-breaking $9 million and gathering 1,500 attendees in 10 cities and virtually in one night.

Following the premiere on Giving Tuesday, UNICEF USA enlisted UNICEF Ambassadors to serve as Executive Producers of the film for the public launch. They posted on their social channels to promote the film’s public release during World Immunization Week in April 2022. They were Orlando Bloom, Sofia Carson and Lucy Liu.

The If You Have film went on to be an official selection in the Tribeca X Festival and won the Best of the Fest and Best Film Awards at the Urban Habitat Better Cities Film Festival.

The digital home page of the film had nearly 10,000 views of the film and even more visits to the film’s website where people could engage with more information about UNICEF’s work. This included driving viewers from ads on theSkimm, Google ads, Facebook ads and organic reach.

Facebook ads also drove an additional 450,000+ in-platform views of the documentary clip. LinkedIn also drove another 151,000 impressions and a click through rate of 0.57% on the clips.

Beyond the Congressional work, the US Secretary of State and UN Ambassador to the UN also shared statements supporting the day.

Beyond the tangible stats, the anniversary provided a rallying moment for employees globally who have been working throughout the pandemic, to celebrate their work and impact.

Video for UNICEF at 75