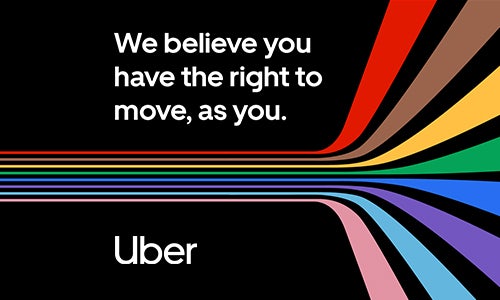 Entered in LGBTQ+, Campaign by a LGBTQ+ Owned Business

Uber exists to make real life easier to navigate, believe in everyone’s right to move, and live freely as their true selves. Around the world, LGBTQUIA+ people — especially transgender and gender non-conforming people — face systemic and cultural obstacles to move through life without fear or discrimination.

Following 2021’s global Right to Pride campaign which ran in 18 countries (also produced by LGBTQ-certified agency Titanium Worldwide), Uber wanted to celebrate the ever-increasing importance of National Coming Out Day on October 11, 2021 in the US, and continue promoting queer safety across their platform globally during October.

The core insight centered around the reality that coming out is not a singular event, but rather a decision LGBTQUIA+ individuals must make countless times in countless scenarios when deciding whether to show their true selves. Through our campaign, Uber showcased their belief that everyone has the right to move exactly as they are, every day. Uber sought to educate and support their users and bring awareness to the countless moments in which LGBTQUIA+ individuals are forced to think about coming out, and about safety. Small moments of support, active allyship, and empathy can make the daily process of coming out less draining.

National Coming Out Day on October 11, 2021 was the next stop on Uber’s journey toward backing and empowering everyone’s right to move. Through their ‘Right to Move’ platform, Uber strives to show up for the community all day every day, but it is important to shine extra light on certain groups and moments throughout the year. Uber celebrates, fights, listens, and re-focuses the resolve in these moments towards backing, and empowering, everyone's Right to Move.

The goals of this campaign were best achieved via social media. By partnering with queer influencers, Uber used their platforms to represent and amplify members of the LGBTQUIA+ community, and reach members of their social followings who Uber may not have engaged with previously.

Uber partnered with queer activists and creatives GottMik, Essie Golden, Brandon Kyle Goodman, and James Whiteside to share their perspectives on coming out and compassionate allyship via Instagram. As the campaign was run organically, it was important to find authentic voices from the community that had a strong social media presence. And through the megaphone of literally millions of billboards in users’ hands, Uber leveraged their own incredibly powerful global platform to expand queer visibility, promote equality, and create safe spaces through in-app interstitials as well as emails to earners and users.

In honor of National Coming Out Day, Uber spotlighted people, places, and community spaces that have played integral roles in people’s coming out journeys. No two stories are the same. For some, coming out was life altering and for others it was another step in their journey. Some were worried about others, and others had internal battles to fight. Some can isolate one moment as the moment, and for others, it has been a progression of learning every day to live our truth.

Uber (1.4m followers) partnered with popular and authentic queer activists and creatives GottMik (1.4m), Essie Golden (183K), Brandon Kyle Goodman (176K), and James Whiteside (357K) to share their perspectives on coming out and compassionate allyship via Instagram. Uber wanted the LGBTQIA+ influencers to do the talking — highlighting the reality that they come out every day. They supported their stories with direct, heartfelt messaging, underscoring Uber’s awareness of the role they play as a connector of people, their commitment to making these connections safe and respectful, and their underlying belief that everyone has the right to move.

The combined posts captured over 180K organic impressions on National Coming Out Day. Additionally, the surfaces within the app were taken over within the US market, which numbered in the tens of millions of impressions.

Video for Uber ‘Right to Pride’ National Coming Out Day 2021 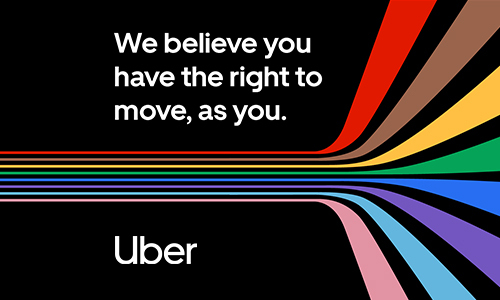 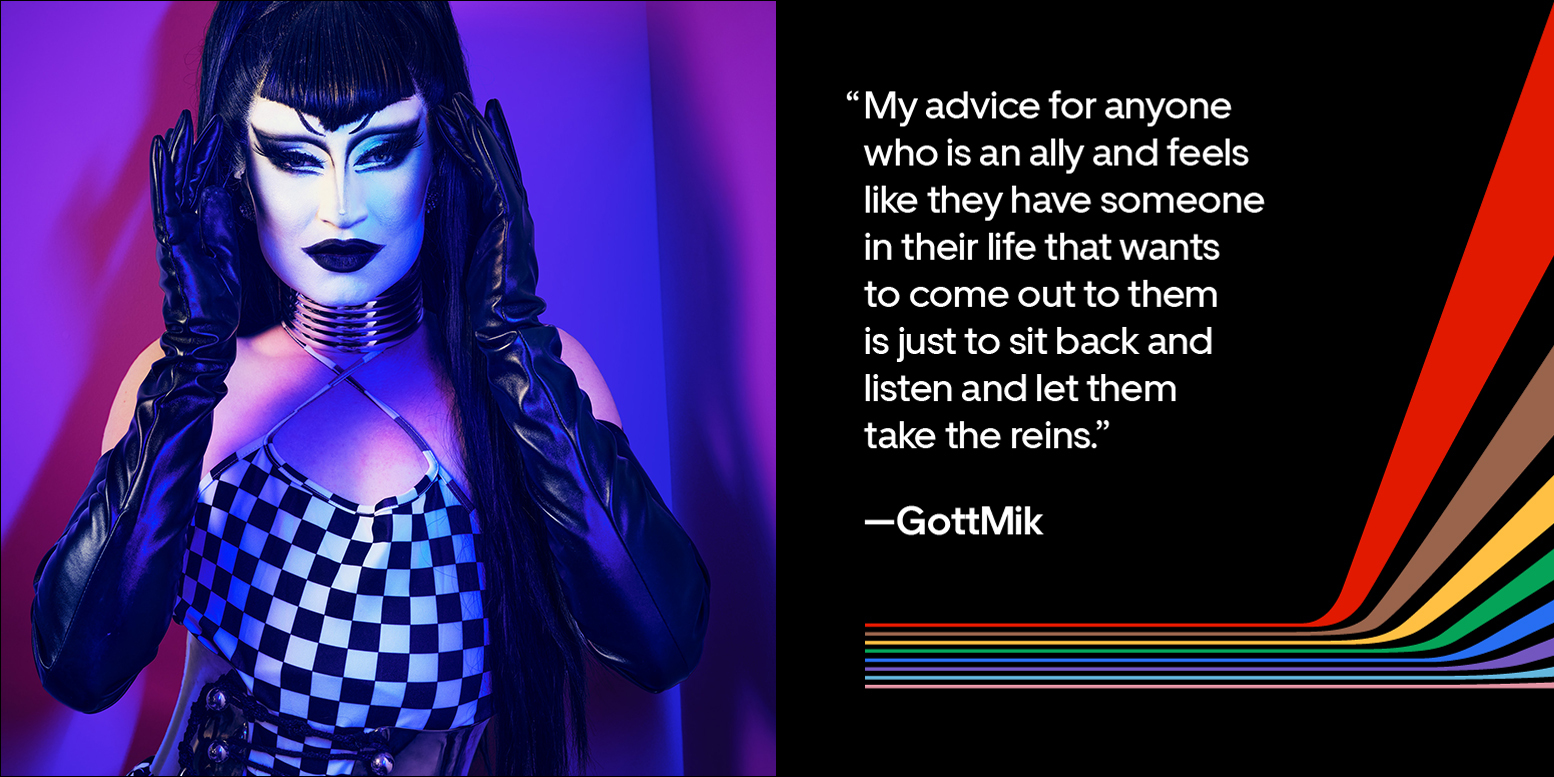 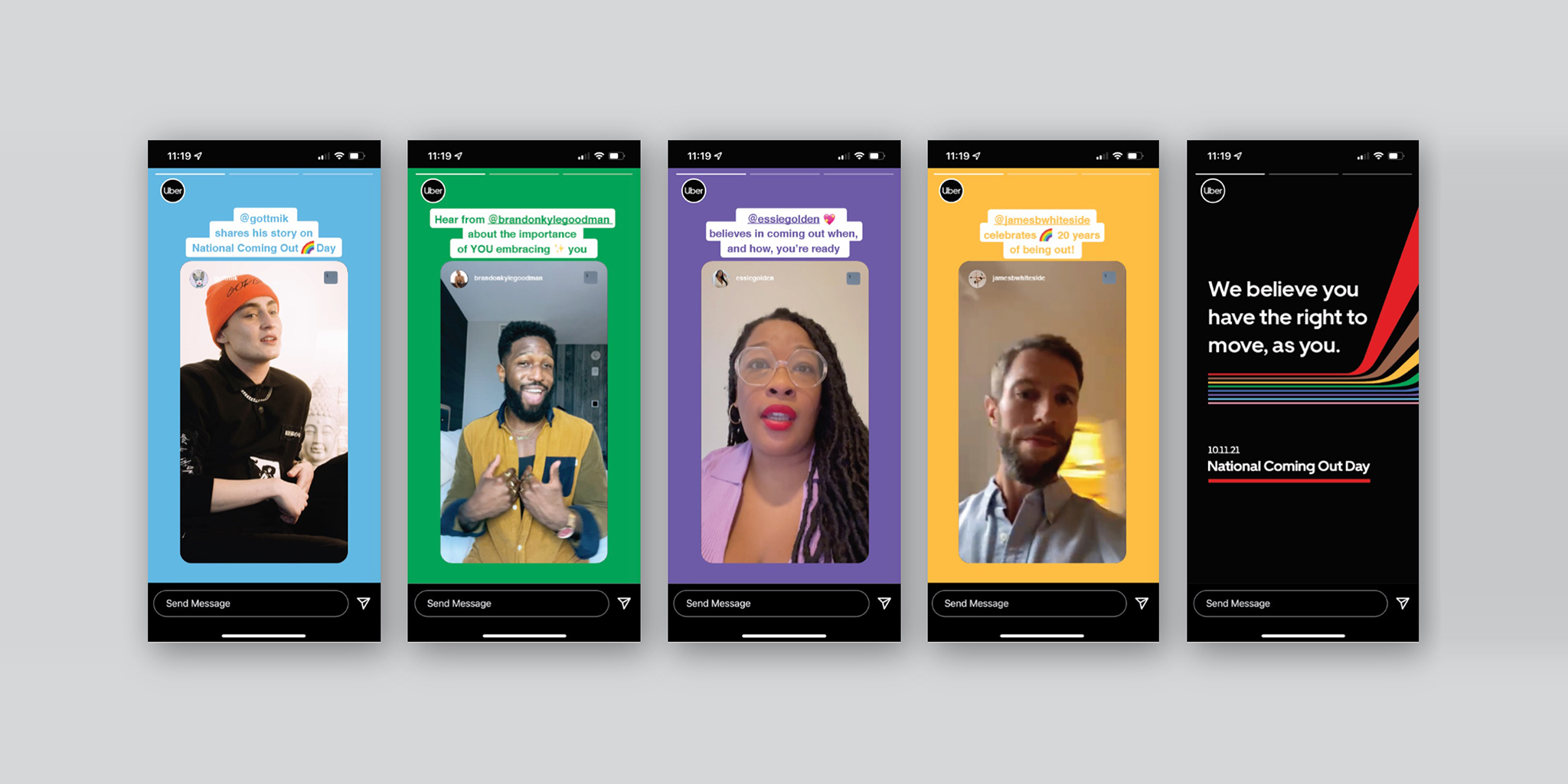 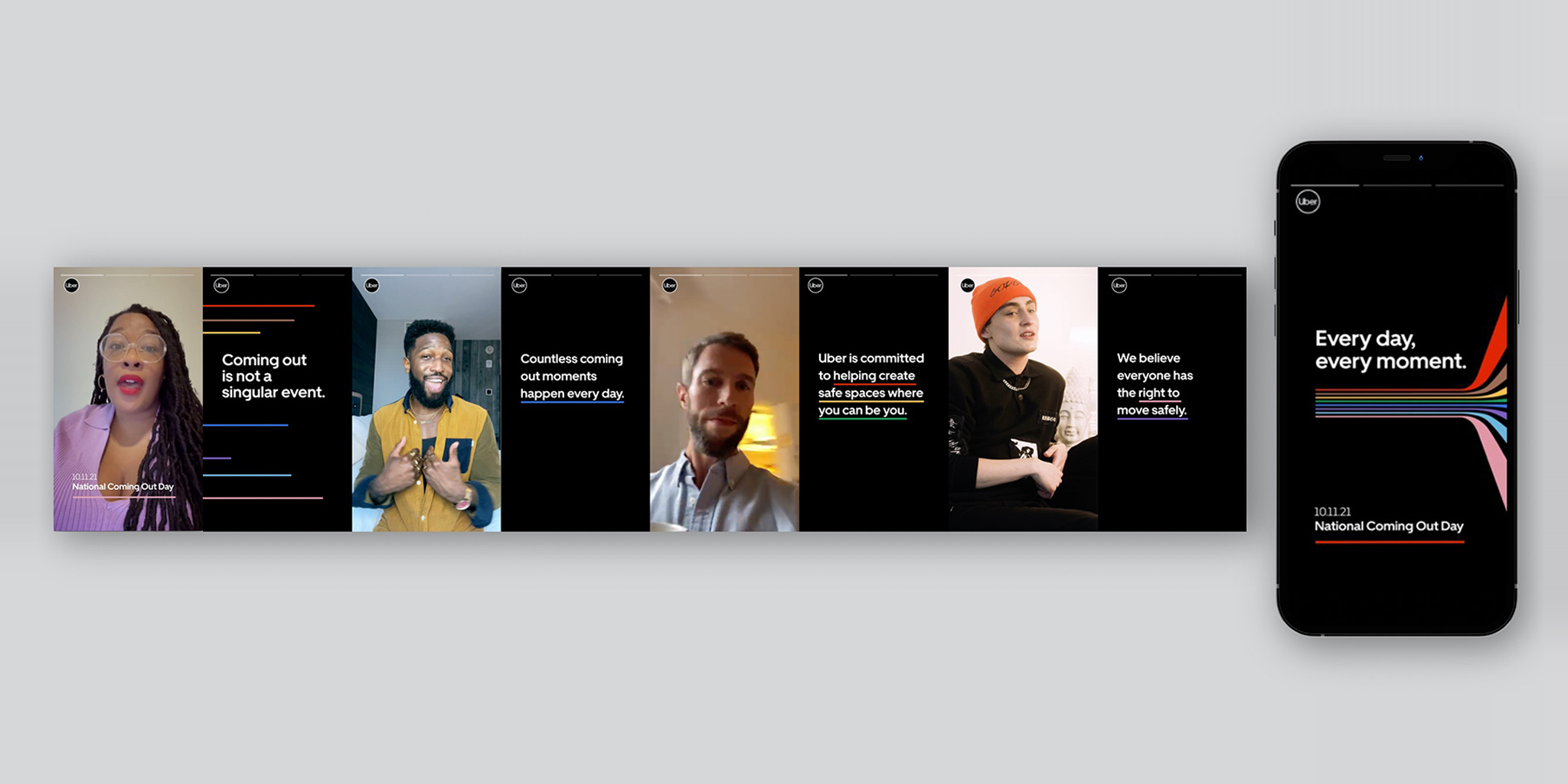 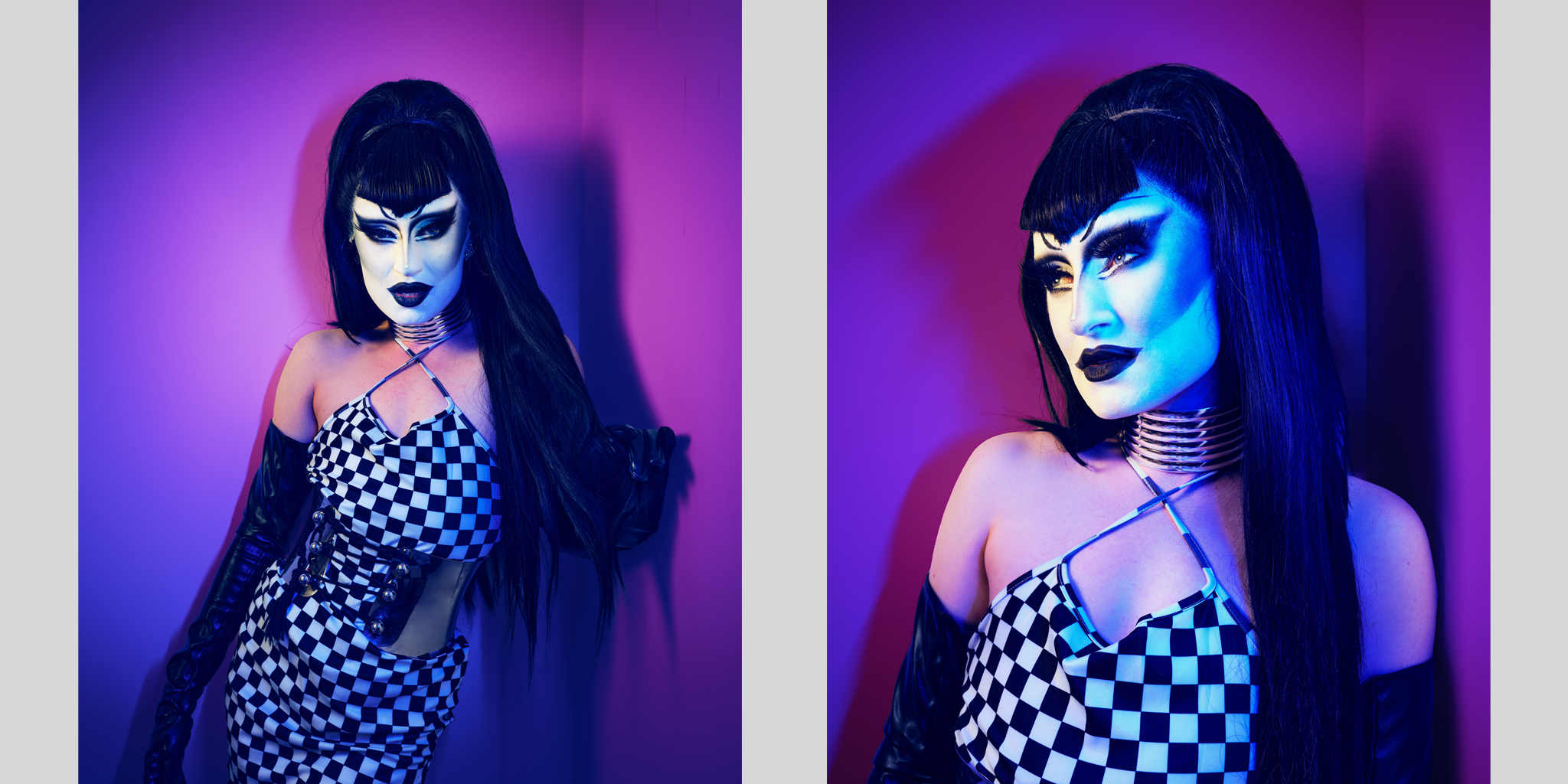 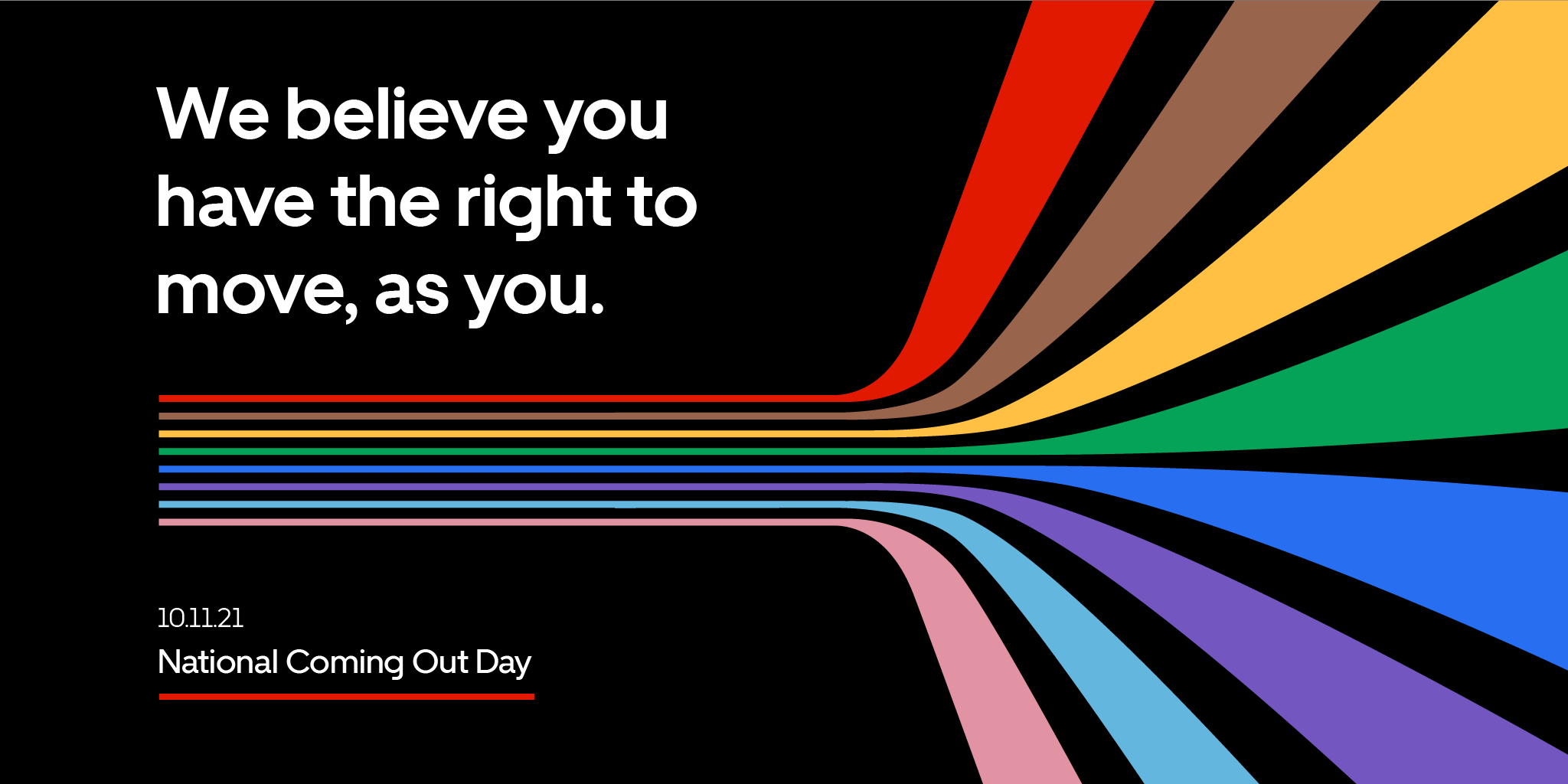