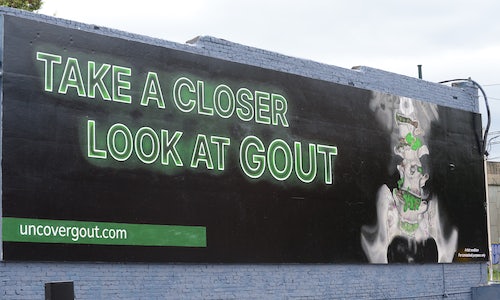 Take a Closer Look at Gout: Inspiring Action Through Art

More than 9M Americans live with gout; yet it is an incredibly misunderstood disease. Most people think of gout as a benign condition that causes painful flares in the big toe or other extremities. The truth is gout is a serious disease that, over time, can have detrimental consequences. Due to misperceptions of gout’s systemic impact and severity, it has largely been under-recognized and undertreated. Many health care providers (HCPs) and patients with gout are unknowingly letting uric acid build up throughout the body, putting patients at risk for permanent damage.

Still, too often, patients and HCPs only worry about gout when there is a flare, rather than recognizing uric acid can be building up beneath the surface causing damage, even without pain. Horizon has been committed to educating around gout so that communities understand gout is a progressive disease that must be treated by getting at the root cause: high uric acid levels.

So, the goal of our campaign was to make the unseen seen, and to inspire communities to “take a closer look at gout.” We wanted to reach people living with gout to recognize there is much more to gout than meets the eye, and inspire them to learn more on our website www.uncovergout.com. The objective was to drive action in seeking care for gout and better understanding that it is a serious disease that requires urgent attention.

The number of people living with gout is on the rise with some referring to it as a “gout epidemic.” Studies suggest and experts say gout is one of the most mismanaged chronic conditions, with many HCPs not recognizing the urgent need to lower uric acid levels to improve outcomes. Instead, they are addressing the painful flares and not preventing disease progression. Only 33% of U.S. patients with gout are receiving urate-lowering therapy, despite the evidence that high uric acid levels are linked to poor health outcomes.

Market research tells us that people living with gout are often older men who are less likely to seek care due to shame and the desire to “man up” in withstanding the pain. Based on previous efforts, we know a successful strategy to inspire action is to educate on the potentially detrimental impacts of the disease, showing there is much more happening in the body than pain.

So, how does one change beliefs and behaviors about gout when so much of it is hidden? The answer: seeing is believing.

Our strategy was to use big, BOLD imagery that visualizes the often-unseen impact of gout, so people were forced to take a closer look at the disease and be driven to learn more. The artist behind the murals was inspired by dual-energy CT (or DECT) scanning, which is an advanced imaging technique used in gout to evaluate the buildup of uric acid that can’t be seen above the skin’s surface. The murals portrayed different body parts—including the foot, hand and spine—impacted by gout. Great caution was taken to ensure the visuals were scientifically accurate, and yet bold enough to make people stop as they walked by.

We placed the murals in four key markets: Atlanta, Charlotte, Houston, Phoenix. All are priority markets for our Commercial team and have a network of gout specialists more likely to take gout seriously in patients who report symptoms.

While the murals were the centerpiece of the campaign, we maximized use of the dynamic artwork across a variety of channels—including digital (website), social media (Facebook, Twitter, Instagram), earned media (print, digital, broadcast), paid media (print, digital broadcast), advocacy partnerships, in-office handouts and a Chicago Cubs sponsorship—to ensure we were reaching a variety of audiences to generate traffic and conversation. Our primary key performance indicator was to drive traffic to uncovergout.com and evaluate actions taken on the site, including any pull-through to the branded website for Horizon’s uncontrolled gout medicine.

With our goal being to primarily drive traffic to uncovergout.com and inspire action, the multi-channel campaign was an incredible success. 18K sessions resulted from the campaign, a 133% increase from May 2021. It also drove 3,500 social media engagements, increasing significantly from 1,334 in May 2021. Additionally, the video on uncovergout.com saw more than 620K views.

Nearly half of the advocacy partners who received the social media “toolkit” shared the campaign on their channels, reaching an estimated 360K followers and generating more than 300 engagements. This included social media posts and one organization sending an e-blast to over 2K recipients in mural markets.

The digital sponsored content with USA Today surpassed the outlet’s benchmarks for page views by 56%, while clicks were 4.5 times benchmark, click through rate was nearly 3 times benchmarks, time on page was twice benchmark, and social media engagement rates were more than twice the benchmark.

Finally, the campaign resulted in nearly 1K visits to the branded website for Horizon’s uncontrolled gout medicine, encouraging 260+ key actions. Average time on site was more than 90 seconds, significantly above the benchmark of less than 60 seconds—showing the campaign reached a qualified audience who was inspired to learn more about gout and an available treatment.

Video for Take a Closer Look at Gout: Inspiring Action Through Art 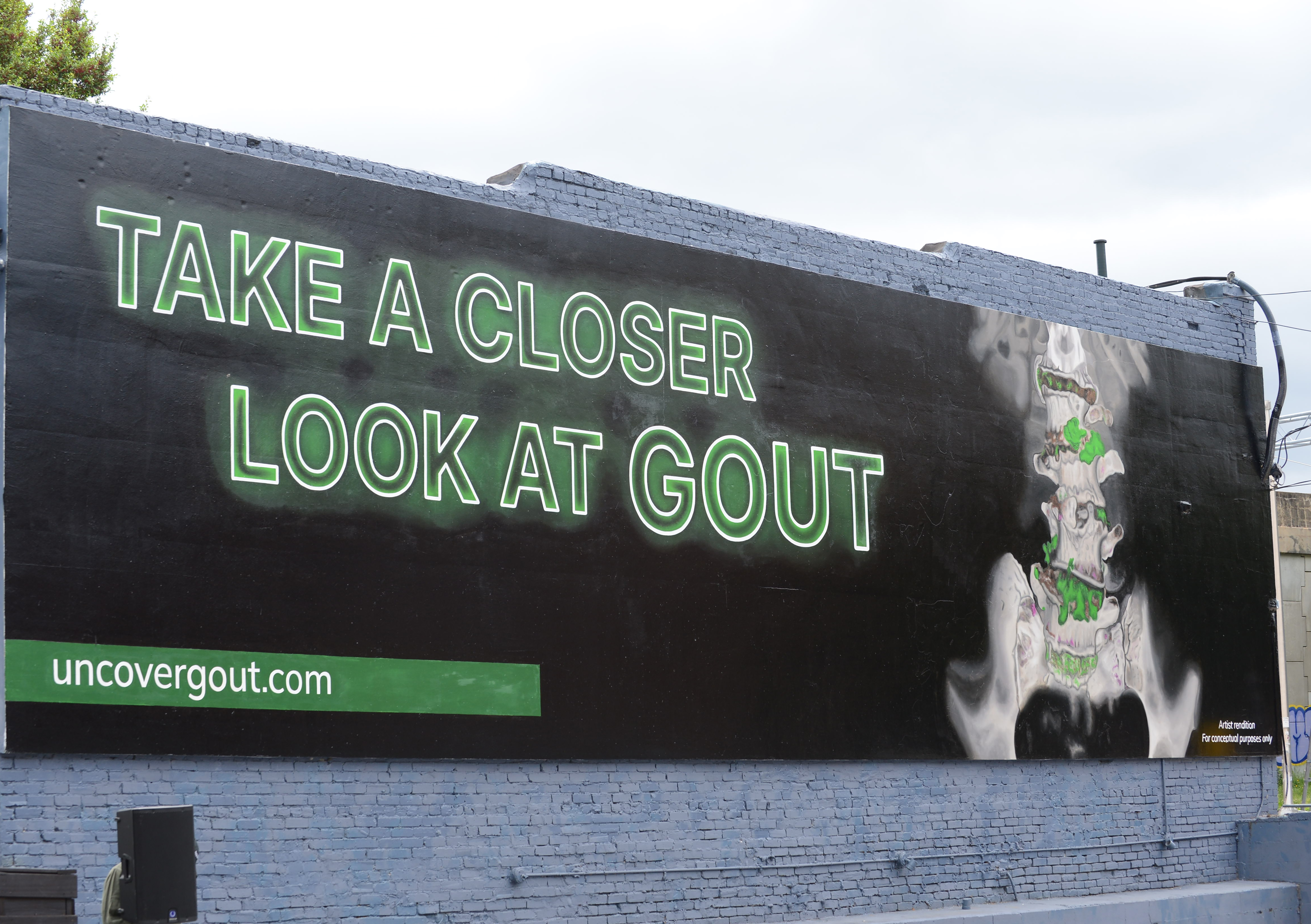