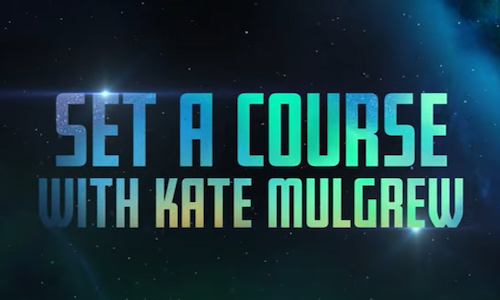 Paramount+ presents Star Trek: Prodigy, a spacefaring animated television series that follows a crew of young aliens in the Delta Quadrant. The crew happens across the abandoned U.S.S. Protostar and takes control of the ship with the hopes of eventually reaching the Alpha Quadrant. Along the way, they will have to quickly learn how to work together as a cohesive team. The exciting new series features the voice talents of Kate Mulgrew, Brett Gray, Ella Purnell, and Jason Mantzoukas.

Paramount+ created an original series for families featuring voice actress and Star Trek: Voyager alumnus Kate Mulgrew. In “Set a Course with Kate Mulgrew,” she offers a social lesson each week for parents and their kids to watch together after seeing the recent episode. Kate offers gentle but necessary reminders to ensure that each episode's important message is clear and accessible for families.

Educating the youth is of 'paramount' importance, and Paramount+ knows this. Star Trek has always been a franchise of expanding knowledge and providing teachable moments. Star Trek: Prodigy’s animated adventures make these values accessible to all ages with important lessons about friendship, found family, responsibility, and altruism. The show invites young fans to broaden their horizons, exploring the world around them and beyond.

To assist in this goal, a companion series of short videos called “Set a Course with Kate Mulgrew” was developed to provide greater insight into each episode's moral lesson. With Kate's focus on reviewing each episode's core themes, the side series hopes to illuminate social ideas for its viewers, helping them understand and engage positively with the world around them.

Paramount+'s “Set a Course with Kate Mulgrew” has received praise from both children and their parents as a great way to highlight each episode of Star Trek: Prodigy and their social lessons. The series of shorts has set the stage for more education-focused content surrounding the Star Trek universe, with all corners of the franchise focusing more on social commentary and communal well-being than ever before. Star Trek: Prodigy's greater focus on tapping into a younger demographic and providing them with opportunities to learn in new and exciting ways has created a new generation of not only Star Trek fans but of future leaders and thinkers.