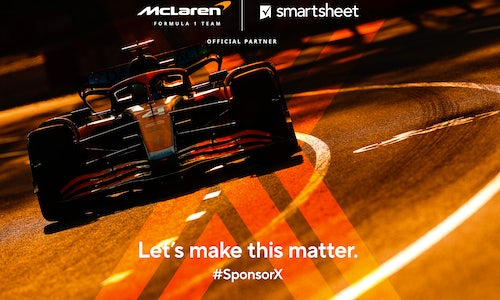 Smartsheet is the market leader in an emerging category, but we wanted to place clear differentiation between us and emerging upstarts. It was time to boldly stake our claim and convey meaning about what we stand for—beyond a simple brand impression and on an international scale.

This wasn’t just about business. Smartsheet runs on the belief that we can empower anyone to drive meaningful change, and our business is only successful if we’re helping create a world where anyone can thrive. By utilizing our McLaren Racing partnership, we flipped the sponsorship concept on its head—using the benefits to put a worthy cause front and center.

Our goal was to increase exposure and raise donations for a nonprofit by providing a visible platform to increase awareness. Smartsheet would also provide free software, consultants, and technology to help them run more efficiently and dedicate more funds to their core mission.

As a company, Smartsheet is focused on antiracism and eliminating sexism by working with local organizations already on the ground making a difference. That’s why we selected DeadlyScience after learning about their approach to providing Aboriginal and Torres Strait Islander youth with STEM educational materials and mentoring. They help kids all over Australia—shipping more than 20,000 books and STEM resources to over 100 communities.

DeadlyScience was already making an impact but could never afford the awareness a sponsorship with Formula 1 could provide. We wanted to shine a light on their hard work inspiring the next generation of scientists.

McLaren’s CEO, Zak Brown, gave us some advice as a first-time sponsor: “It’s great to have your logo on the car, but where you really get maximum impact is with sponsorship activation. Don’t just show up to the races and let the car do the work—challenge us. That’s how you bring out the best in us.”

Most sponsorships are about getting a brand in front of as many eyeballs as possible. But for Smartsheet, sponsorship isn’t about what we get—it’s about what we give. Whether it’s a logo, tools, opportunity, or visibility—we offer a platform. Why? Because our greatest power is in unlocking the power of others.

With a record-breaking audience of 55 million, The Australian Grand Prix gave us a huge podium to do just that with a world-first initiative: Sponsor X.

We had many compelling options for incredible Australia-based nonprofits to partner with for this initiative. It was a challenge to land on just one that aligned with our corporate social initiatives. But when we learned of DeadlyScience, our choice was clear—they were underfunded but extremely deserving, and we knew they could benefit from Sponsor X.

Once we engaged DeadlyScience, we had a less-than-two-month race to the finish line with a few additional bumps in the road, including mobilizing a crew to capture footage at indigenous schools in remote Australia that were destroyed by massive flooding days before filming. Luckily, another school was willing to have our crew visit at the last minute to experience DeadlyScience in action and capture their incredible work for the world to see.

But the logo switch was just the beginning.

All marketing and PR efforts, including media buys, for the race were used to promote DeadlyScience in an effort to increase awareness and drive donations. Teaser videos launched on all Smartsheet’s social properties the week prior to build intrigue and excitement. We revealed DeadlyScience using video-first social media posts from McLaren and Smartsheet influencers, including a Smartsheet TikTok takeover. The campaign took off when we tapped McLaren’s huge social presence and the celebrity of F1’s only Australian driver and hometown hero, Daniel Ricciardo, who became our Sponsor X ambassador. Our Sponsor X landing page also highlighted the purpose behind the campaign, shared DeadlyScience’s story of impact with compelling visuals, and made it easy to donate.

Finally, we invited DeadlyScience’s 29-yr-old founder, Corey Tutt, to the Australian Grand Prix and gave him and his team VIP treatment with personal meet-and-greets with Ricciardo, our top Smartsheet customers, and top-tier media covering the race.

And this is a long-term relationship now: We have set DeadlyScience up with free software licenses and consulting hours to improve their organizational efficiency so more of their funds raised can directly benefit the kids they serve.

Sponsor X was a first-of-its-kind initiative. And it worked.

Sponsor X is the embodiment of Smartsheet’s mission to empower anyone to drive meaningful change and proved that social impact brand initiatives can work hand-in-hand with business goals.

The initiative boosted the confidence of DeadlyScience’s kids, helping them truly feel “seen” for the first time. It also impacted Smartsheet in unexpected ways. One team member commented that she’d never felt more connected to the company or her work. Several job candidates told us they answered Smartsheet’s call because of our work with DeadlyScience. Potential customers noted that they added us to their consideration set because of the campaign.

@structuregeo said it best: “Oh wow! @Smartsheet are sponsoring #McLaren #F1. They have gifted their spot so that McLaren will wear a @DeadlyScience logo at the Australian Grand Prix. I’ve never heard of smartsheet before but I probably won’t forget them after this.” 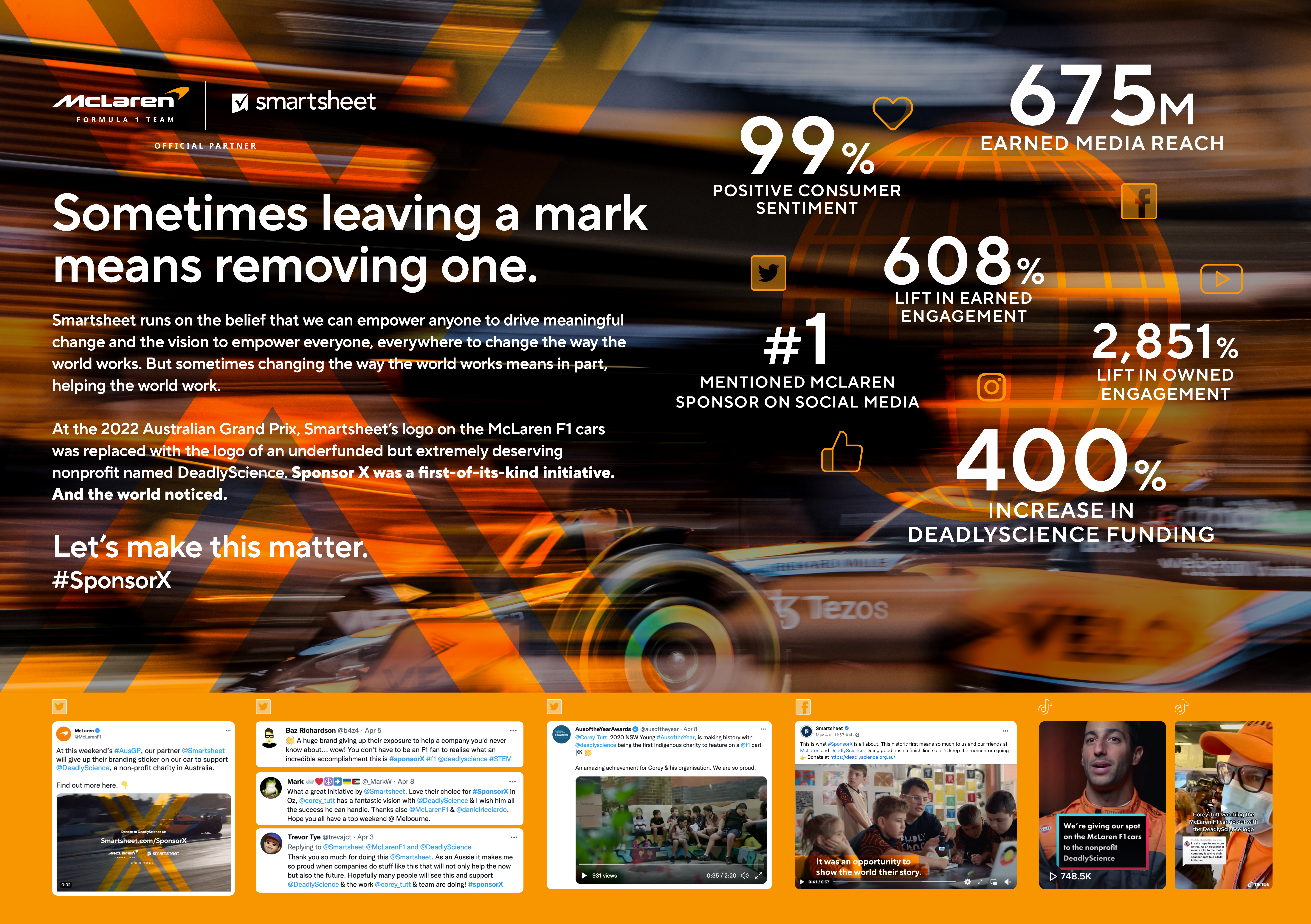 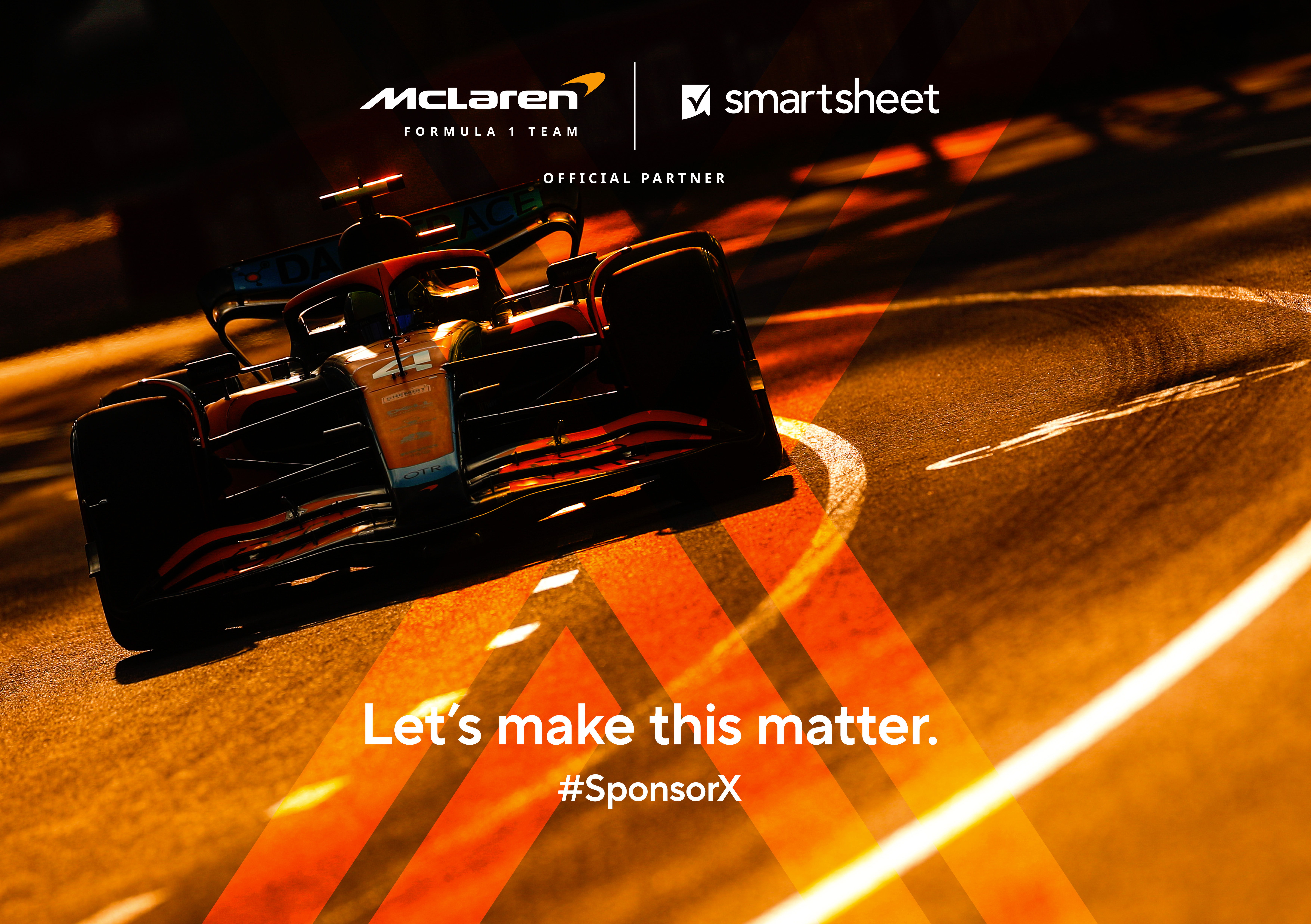