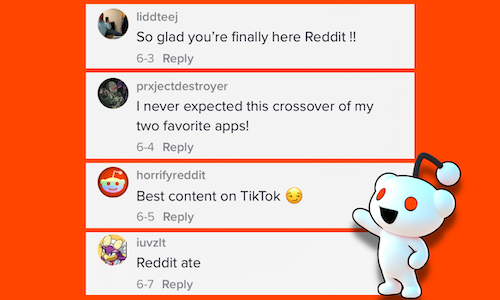 Reddit, a 17-year-old community of online communities, and TikTok, the newer kid on the social media block, have more in common than not. They’re both interest-based platforms that rally around passions, are go-to’s for product recommendations, and have unparalleled banter in the comment section. Tasked with shepherding the next frontier of Reddit Social, we took on the exciting responsibility of bringing these two giants together by launching Reddit’s organic presence on TikTok. The goal of joining TikTok is to highlight the best of Reddit's content, conversation, and communities in brand new ways so that users on TikTok can find their home on Reddit.

When deciding how to best insert Reddit into the fast-paced and trend-centric culture on TikTok, we knew that we had to enter the party in a way that only Reddit could: by being absurdly self-aware.

The launch strategy consisted of three progressive phases that aimed to break through the brand noise of life-size mascots, hashtag challenges, and spendy collaborations. Leading with Reddit tropes that were already prevalent on the platform, we put forth a cohesive strategy that highlighted Reddit’s unique subculture and repository of content that can only find be found here.

Coming out of the gate, we tapped into the zeitgeist by leading with a format already familiar to TikTok users: robotic narrations of Reddit posts against a videogame background. This format, also known as “Reddit stories,” had become increasingly popular on TikTok with the volume of accounts that specialize in it growing significantly since August 2021. Even on other platforms, such as Twitter, a collective fondness for this type of content was growing:

“Holding myself accountable, I f***ing LOVE those Reddit story TikToks I can't scroll past a single one I have to know every stranger's deepest secrets they fuel me I wake up and watch 3 Reddit TikToks for breakfast they’re delicious I can't get enough of them I'm addicted” (link)

For our very first video, we re-created a text-to-voice reading of a Reddit post – Minecraft background of our Snoo mascot and all. However, this story announced our arrival to TikTok.

To give our initial follower base an idea of what to expect from our channel, our next few videos aligned with the content pillars we identified prior to launch as being the general basis of our account. This included a video from r/pokemon, a trending filter, and, of course, a Reddit story

Now that the channel’s strategy was established, this was an opportune time to revive our recent global platform activation – and runaway success – r/Place. r/Place, which had concluded two months prior, is a five-day activation involving a collaborative canvas on which users can place a single tile every five minutes. Redditors work together to create art, flags, logos, and much more; the final canvas acting as a time capsule of Internet culture during that time.

For our first video in this phase, we shared a timelapse of the canvas, which quickly amassed 1M views. The video asked users to comment their favorite corner of the canvas, prompting a two-week dialogue with our new followers, in which they requested deep cuts of r/Place and our team would deliver. We reactively produced 10 additional cuts of r/Place, including the Canada flag (5.2M views), an eerie dark mass affectionately called “The Void” (1.6M views), and the AmongUs that infiltrated nearly every design (154K views). Honing in on Reddit’s absurdly self-aware brand identity, we also had some fun with our followers by joking about the burden of making r/Place TikToks around the clock (39K views).

Within the first month of launch, we organically achieved the following results:

Reception of our entrance was overwhelmingly positive, with comments from our followers including:

"I never expected this crossover of my two favorite apps!" - prxjectdestroyer 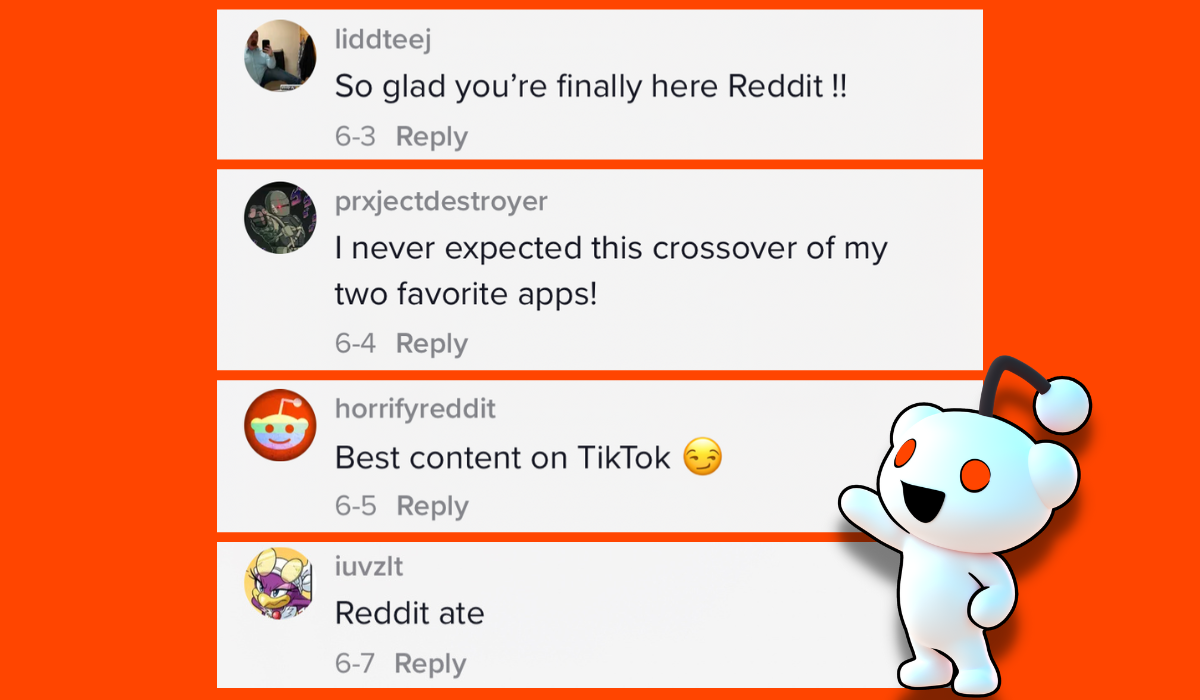 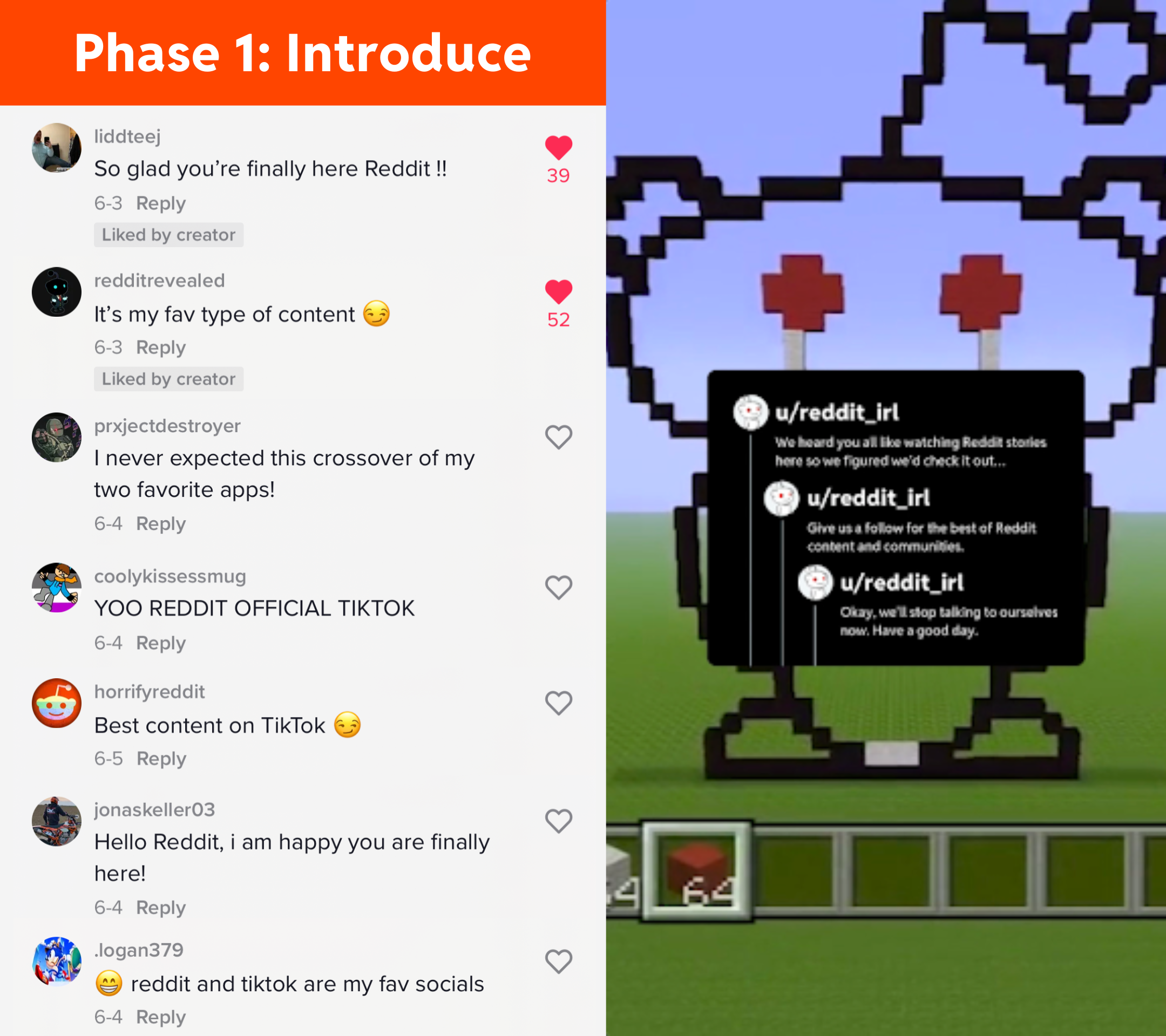 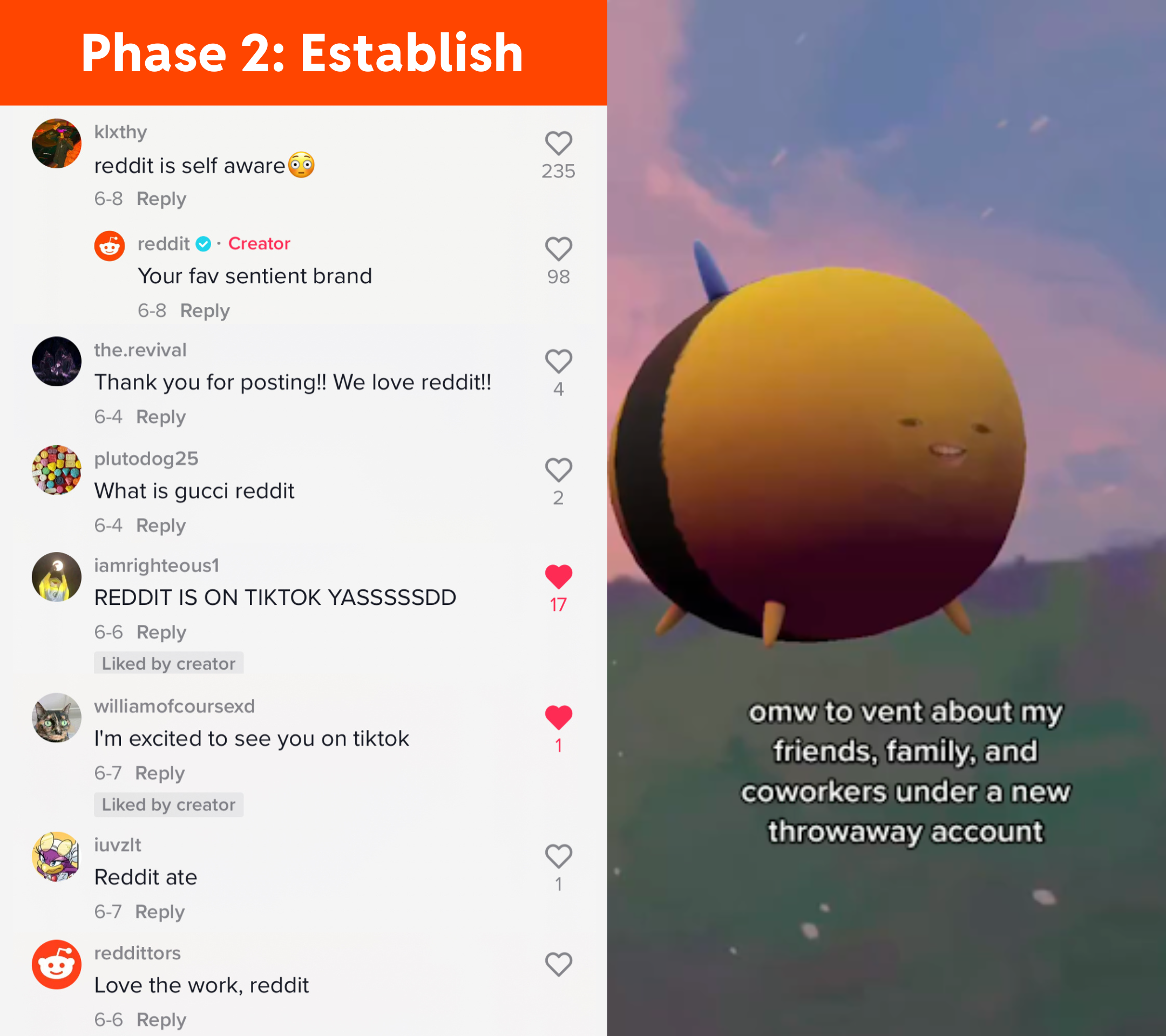 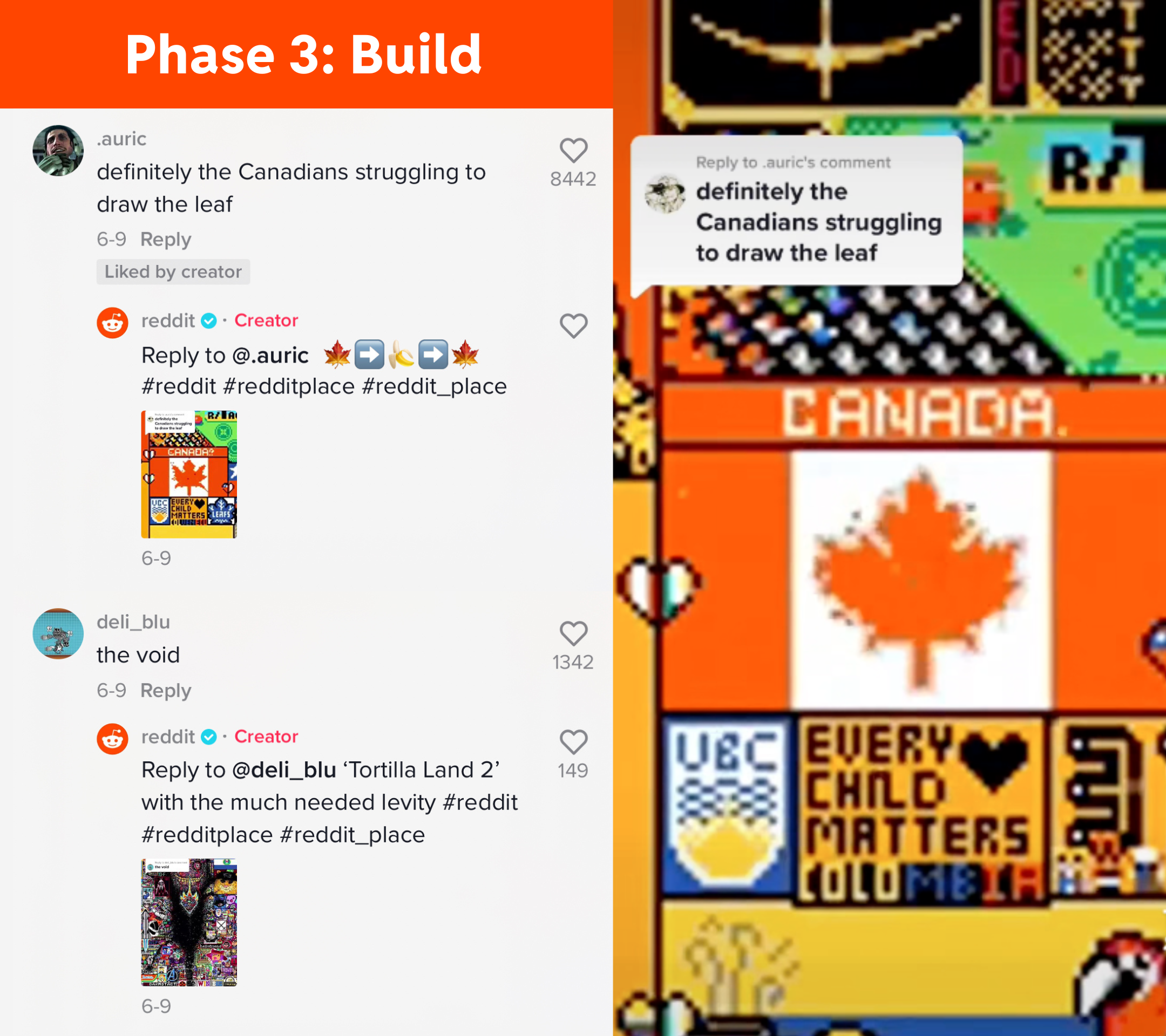