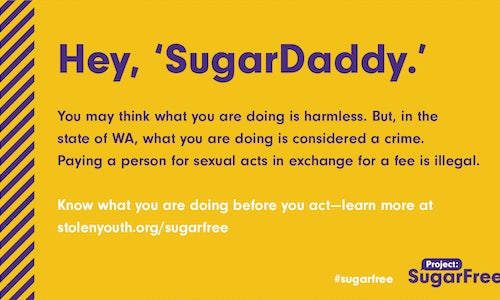 Between 2,000-3,000 children in Washington state are presently being trafficked for sex. Traffickers are continuously adapting creative, aggressive, and digitally-minded approaches to attract victims. Enter ‘Sugaring,’ ‘Sugardaddies’ and ‘sugarbabies:’ an innovative, dangerous rebrand of prostiution quickly gaining traction; From a marketing standpoint it’s easy to see why.

Traffickers lure victims with the offer of a “mutually-beneficial relationships” with affluent adults and the promise of easy, fast money. Essentially, traffickers groom young—often disenfranchised—victims through glamorized prostitution and asserting the illusion of an attractive lifestyle. Traffickers focus and amplify their efforts on social media, reaching vast audiences with relative anonymity, effortlessly making direct connections to potential victims at scale.

While we were analyzing social conversation datasets for a financial institution, we discovered a surge in “SugarBaby”-related posts among our brand’s social mentions: Here were exploiters, flagrantly soliciting sex for cash and tagging banks in their posts.

We got to work and created Projects:SugarFree.

When we think about award-winning industry hero stories through the lens of marketing, it’s nice to picture a faltering business awaiting its savoir campaign.  This is not that business. This business is lucrative. It is thriving. It is awful.  Project:SugarFree was the result of pure serendipity, supported by research, data, analytics and creative inspiration.

Our team had recently learned about a growing phenomenon called “sugaring.” We saw websites like Seeking Arrangements actively operating with highly sophisticated, professional approaches to connecting individuals for a so-called “mutual benefit.”

But the data said otherwise, and said so conclusively: Sugaring relationships were fast and direct onramps to trafficking. Even more troubling, many of the victims of sugaring and trafficking were underaged girls and boys.

At the same time, several of our data analysts were combing the internet for social commentary and discussions to support a separate banking client. A strange and dominant story began emerging as part of this project: significantly growing conversation in the banking space about sugaring.

This discovery had us floored, demonstrating the vast extent to which exploiters were using social media and tagging national and local banks in their solicitation for sugar babies. By @ and hashtagging financial institutions, they gave their messages wide reach, along with a perceived endorsement from these organizations.

This discovery drove our key insight: We could use exploiters’ own technology against them. By interrupting and intercepting the conversations where they were happening on social, we could let exploiters know that someone was paying attention—oh, and by the way—they were susceptible to legal scrutiny. Furthermore, we wanted to intercept victims and potential victims who were also in the space considering sugaring, giving them a more truthful and consequential idea about the practice.

Because sugaring thrives in the always-on space of social media, we developed an always-on software that could actively identify and capture sugaring-related tweets around the clock. We accomplished this using AWS and TwitterAPI to connect posts. Responses were direct and often real-time, some automatic and manual responses to the tweets identified by our software. To help meet our goal of having exploiters de-platformed, we built tools to measure, report and flag exploiter tweets as well.

To keep our efforts focused and effective, we chose to limit our responses to the Twitter platform, where we could closely monitor, respond and adapt as necessary without diluting our resources across multiple channels. Both copy and graphics were developed as audience-specific. For potential victims and sugaring language normalizers, we crafted inviting color combinations and conversation-bubble treatments to educate and support. For exploiters, however, content was developed using high-contrast, visually jarring elements designed to cause alarm. From a messaging standpoint, copy was written for maximum persuasiveness and potential value to victims in tandem with local prosecuting attorneys.

In an industry obsessed with increasing sales, we were uniquely positioned to end them. Our goal was to save 1 person from unwittingly entering a life of sex traffic. Based on behaviors and results, we believe we have far surpassed our goal.

Typically, marketing efforts are almost entirely focused on increasing sales. Our work however, was engineered to reduce sales in a nefarious industry. Our mission is to prevent children—even just one—from being targeted or trafficked. This mission can be looked at through two overarching objectives:

OBJECTIVE 1: Reducing sex trafficking purchases by decreasing the number of exploiters (and communications) who are actively soliciting on Twitter.

OBJECTIVE 2: Reducing the consideration of sugaring as a legitimate activity by decreasing the amount of sugaring activity on Twitter.

Results: Project:SugarFree successfully reduced consideration by convincing those curious about sugaring lifestyle to remove probing tweets on their own. We captured and reported 34% of identified exploiter tweets and reduced the number of identified exploiters on the platform by 20%. While we can’t measure actions taken to delete individual tweets, we do have anecdotal evidence of victims and potential victims removing their own tweets.

Project:SugarFree thus far has captured >11.3k conversations, have reported 4.1k posts, posted 3.8k replies and have had 1.4k posts removed. We’ve identified 90 exploiters and de-platformed 24 of them. These results are making a difference. 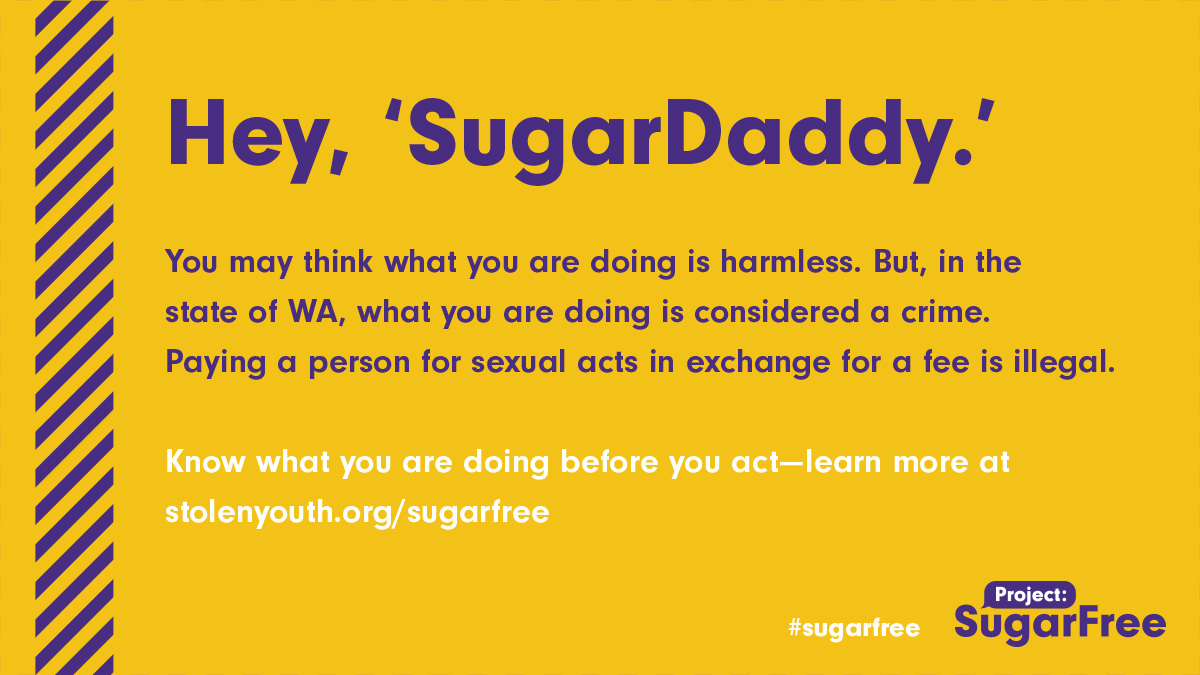