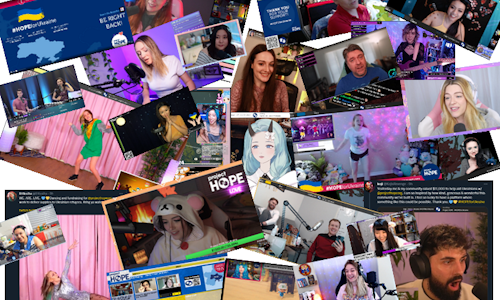 Project HOPE’s fundraising team hit the ground immediately. We had started partnering with live streamers in March 2020 at the height of the COVID-19 pandemic with the goal of reaching, engaging, and activating a new generation of donors, while building awareness for Project HOPE’s work. This initial effort was so successful that we raised $106,000 from 202 creators in 2020 and $182,000 with 197 creators in 2021. This groundwork enabled us to quickly rally and call upon our passionate community to support this new campaign for Ukraine through the platform Twitch.

The campaign, #HOPEeforUkraine, originally set out to:

Ultimately, the results far exceeded our expectations. To date, Project HOPE’s #HOPEforUkraine campaign has raised over $1.4 million in the past six months and has invited a new wave of support and awareness for the organization’s work.

As Project HOPE mobilized a response to Ukraine, we put out a call Feb. 24 on Twitter using the hashtag #HOPEforUkraine with a link to Tiltify, a charity fundraising platform, to help raise money for much needed support for refugees who were fleeing the crisis. We leveraged Tiltify as well as another charity streaming platform, Streamlabs, to create landing pages that housed: links to active fundraisers; updates for followers about our Ukraine response; and a fundraising toolkit. The digital toolkit included Ukraine-themed overlays, videos and graphics; Project HOPE logos and fonts; and background information on Project HOPE. This led to a wave of social media engagement and Twitch charity streams.

Despite operating in an oversaturated fundraising space, Project HOPE’s social channels saw a huge uptick during the first six months of the Ukraine crisis, including 74% growth in impressions, 123% growth in engagements, and 118% growth in clicks, which helped to increase our brand recognition and credibility.

We kept the audience updated on Ukraine relief efforts by providing daily updates through on-the-ground photos and videos, media coverage, and regular situation reports. We also shared dollar impact examples to give donors a feel for how their gifts would fuel tangible results. Our team faced head-on the challenge of tracking, thanking, and engaging with the hundreds of streams happening at the same time and flooding social media. We would regularly join livestreams on the Project HOPE Twitch account to engage with streamers and donors to express our gratitude. We engaged at all hours of the day to like, comment, retweet, and publicly thank streamers on social platforms, as well as through personalized thank-you emails. We also established a Discord channel, which provided a direct way to connect and share updates with the online community of supporters. These efforts helped to knock down communication barriers and to show that Project HOPE was approachable and responsive.

As more international organizations started doing relief work in Ukraine and created Twitch campaigns, the space became even more saturated and competitive, however, our dedicated strategy to actively reach and appreciate the community helped overcome these challenges, allowing Project HOPE to far outraise and capture grassroots support compared to peers.

The #HOPEforUkraine campaign’s success was due to a focused strategy that began in 2020 to build brand awareness and credibility. When we put out a call for help in February 2022, our supporters quickly responded, and #HOPEforUkraine resulted in:

With these donations, Project HOPE was able to make a real, tangible impact for the people of Ukraine. To date, Project HOPE has delivered $6.5 million in medical supplies to 91 health facilities in need, continues to support a children’s hospital in Poland and provide mental health support for refugees arriving in Poland, Romania, and Moldova.

As a result of #HOPEforUkraine, Project HOPE has continued growing its Twitch network and remains a popular beneficiary of streams to support relief efforts in and beyond Ukraine. Since launching #HOPEforUkraine, we have received an additional $66,210 from 25 creators and 975 donations for our efforts outside of our Ukraine response, including a highly successful streaming fundraiser from musician Post Malone on Twitch. Project HOPE will also be activating at TwitchCon this fall in the hopes of meeting the streaming community face-to-face. 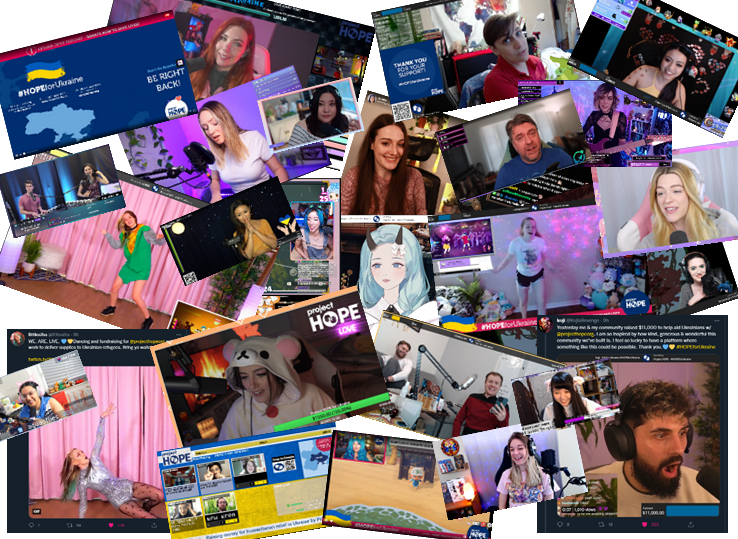