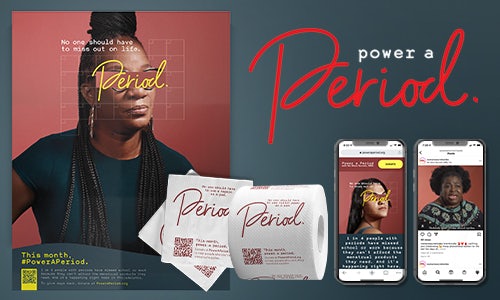 Menstrual health is rarely discussed, which means that period poverty (the lack of access to menstrual products) often flies under the radar. In fact, many people in the US believe that period poverty primarily affects developing countries. However, 1 in 4 people with periods in the US have missed school or work because they can’t afford the menstrual products they need.

That’s why we teamed up with Philadelphia-nonprofit No More Secrets, Mind Body Spirit, Inc. (NMS), to create the Power a Period campaign, spotlighting real voices of period poverty.

The goals of the campaign were to:

Because many Philadelphians are unaware of the prevalence of period poverty happening in their own backyard, it was crucial to amplify real voices from the Philadelphia community. Most campaigns and fundraisers about period poverty just educate on the facts. But we wanted to give a platform to those who deal with period poverty first-hand. This allowed us to authentically connect with the community to raise awareness.

In lieu of menstrual hygiene products like pads and tampons, those living in period poverty often use unhealthy alternatives, like napkins, toilet paper, and even newspaper. So, we spread our message using those very same items. With the scan of a QR code, readers could easily access our site and donate to No More Secrets.

We launched the Power a Period campaign on October 1 to align with Period Action Day on October 9. We created social posts on Instagram and Facebook, amplifying the authentic voices of the women in Philadelphia who rely on No More Secrets for their period products. With no media budget, we posted to the No More Secrets community using their own social handles. Almost instantly, we saw a huge uptick in engagement. The campaign was shared, commented on, and amplified in a big way. With donated space, we ran a simple ad in the Philadelphia Inquirer.

Video for Power a Period 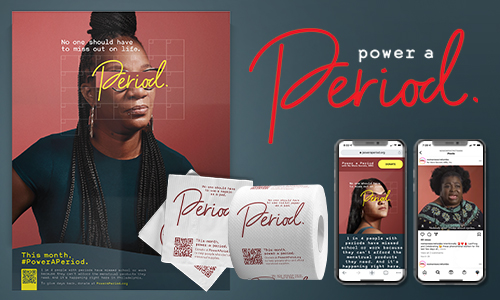