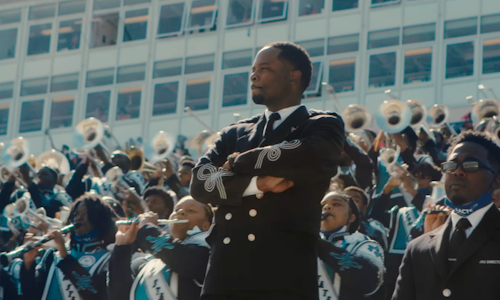 As part of PepsiCo’s broader commitment to support historically black colleges and universities and foster African American talent, the Pepsi - SWAC Southwestern Conference campaign aimed to amplify underrepresented voices and shine a spotlight on HBCU culture. Since making its pledge to support and shine a light on Black talent, PepsiCo has:

When the Pepsi South Division marketing team was selected as the primary beverage sponsor of the Southwestern Athletic Conference (SWAC) — a collegiate athletic conference comprised of 12 HBCUs in the Southwestern part of the United States — PepsiCo leveraged the opportunity to make a spot that elevates and celebrates HBCU culture. With the goal of partnering with HBCU institutions and alumni, the brand set out to create a narrative that was embedded in culture, and compelling enough that the ad alone would garner coverage from prominent and relevant publications.

The resulting 60-second spot, titled “The Halftime Game” brought the excitement of storied HBCU band culture during one of the biggest football games of the season: the much-anticipated Southwestern Athletic Conference Championship game.

Upon conducting social listening, the Pepsi Studio team learned that football is more than just a game at these HBCUs; it’s a time when the community comes together to celebrate. School pride runs deep for HBCUs, and many Black Americans who did not choose HBCUs consequently feel like they missed out on an important part of school culture. PepsiCo recognized this gap in coverage and sought to shine a giant, Pepsi-sized light on what it means, and feels like, to be part of an HBCU.

At HBCUs, football isn’t just about football, but also about the energy, hype, and history that bands, dancers, drum majors and majorettes bring to halftime and beyond. PepsiCo therefore created a first-of-its-kind spot that treats HBCU marching band performers the way that most sports treat athletes, showcasing the sweat and dedication it takes to turn halftime into its own seat-gripping, stand-cheering event.

Directed by HBCU alum Alan Ferguson in partnership with PepsiCo’s in-house Content Studio, “The Halftime Game” featured two top-ranking HBCU marching bands, Florida A&M University (FAMU) “Marching 100” and Jackson State University (JSU) “Sonic Boom of the South,” to highlight the electricity and history they bring to game day. Both JSU and FAMU’s bands are known throughout the HBCU community for their showmanship, style, and innovation. By spotlighting a different kind of on-field skill in the :60 ad, PepsiCo generated massive exposure for all HBCU band programs, paving the way forward to garner the support of future donors and corporate sponsors. Aside from serving as a catalyst for advancing one of PepsiCo’s core missions, the commercial provided a unique opportunity to help make HBCU students’ career and professional development dreams come true.

PepsiCo invested $3M in the spot, which aired on ESPN2 during the highly-anticipated SWAC Championship Game between JSU and Prairie View A&M University. It was further promoted across all SWAC media, on ABC during December’s Celebration Bowl, and on national media outlets throughout the month.

PepsiCo’s work on “The Halftime” Game” amplified underrepresented voices and raised awareness of HBCU school culture in a storied and unexpected way. Ultimately, this narrative fostered a greater sense of school pride and community — and additionally resonated with Black Americans who felt that they missed out by not choosing an HBCU.

Among target African-American audiences, the :60 ad generated 8.5 AFAM scores (1.3 above average), 8.1 Purchase Intent (1.1 above average) and U.S. General Population scores far above General Population norms. From a media standpoint, PepsiCo exceeded KPIs by +947%, earning 891 potential impressions across 121 placements, and tapping into mainstream media appetite to tell diverse, purposeful stories. Of these placements, 98% were either a lead or feature brand story, 64% included a talent or executive quote, 65% included a photo or video, and 100% of all coverage was message-rich with positive sentiment. Highlights included pieces in Vibe, AdWeek, Rolling Out, HBCU Legends, Essence, and more.