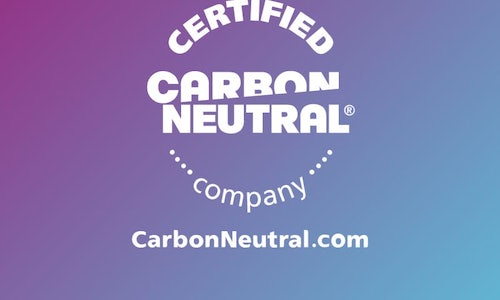 Thanks to the power of the internet, and the precision of digital advertising, brands are able to reach their consumers more efficiently and with greater accuracy and scale than ever before. But, the entire global internet industry is responsible for 4% of the world’s carbon emissions. To put that in perspective, if the internet itself were a country, it would have the third largest carbon footprint in the world, behind the US and China.

Digital advertising across web, mobile and connected TV is responsible for a significant amount of those carbon emissions in the atmosphere. As a pioneering leader in advertising technology processing more than 300 billion ad requests every day, OpenX believes that we can no longer conduct business as usual, and set out on a path not only to make a transformational change in its carbon emissions, but to set an example of the highest standard for the industry.

OpenX first embarked on its “Path to Net-Zero,” a long-term strategic initiative launched in 2018, to effect a transformational reduction of carbon emissions within its own business as well as that of the larger digital advertising industry. This not only included achieving carbon neutral status but also becoming officially certified as carbon neutral by an independent third party. Additionally, OpenX set its sights beyond carbon neutral to achieve net-zero status. From the beginning, OpenX was intent on a rigorous and transparent sustainability process that would set the highest standards possible for itself and the industry to follow.

From the beginning, OpenX was intent on a rigorous and transparent sustainability process and not a superficial “green” marketing claim. As part of a commitment to all stakeholders - including people and the planet - OpenX believed it was essential that its entire climate program be substantiated with reputable, third-party verification. The company set out on this journey to make a meaningful change not only in its own business practices but to illuminate a path for the ad industry and trigger major changes throughout the larger advertising as a whole.

The company kicked off this long-term strategic effort in 2018 with the decision to replatform its business, selecting Google Cloud Platform (GCP) for its efficiency and scalability, as well as its operationally carbon neutral status since 2007. OpenX processes more than 300 billion ad requests per day, and the technology migration allowed it to operate the advertising exchange with far more computing and energy efficiencies. In addition to the GCP shift - a multi-year and multi-million-dollar effort resulting in a drastic reduction of carbon emissions - the company took other steps to help minimize its carbon footprint, including defaulting to remote working, reducing business travel, downsizing office locations from nine to four and even cloud-enabling the office infrastructure. OpenX then engaged international climate experts to help with: creating its first official Greenhouse Gas (GHG) inventory, engaging leading third-party inventory verification and CarbonNeutral® certification firms, setting Net-Zero targets, and quantifying the 90% reduction in emissions.

The creation of the GHG inventory was an arduous process that required a 17-person team and a 19-page plan that outlined each step, including the use of leading methodologies and international resources and tools like the World Resources Institute (WRI) GHG Emissions Calculation Tool. OpenX contracted a leading accredited third-party verifier of greenhouse gas inventories, Lloyd’s Registry (now known as LRQA), to obtain independent verification of this incredible work. After extensive review, LRQA issued its verification and confirmed compliance with the Natural Capital Partners CarbonNeutral® Protocol to qualify OpenX for certification as a CarbonNeutral® Company. OpenX was the first (and is still the only) adtech company with such certification. In compliance with the SBTi Net-Zero standard, OpenX decided to offset the remainder of its carbon emissions through high quality, verified carbon removal projects provided by Natural Capital Partners. This approach not only prepared OpenX to be quickly certified as a CarbonNeutral® company but fulfilled a key criterion to be a Net-Zero company. Additionally, OpenX committed to the most ambitious Net-Zero targets allowed by the Science Backed Target initiative (SBTi) which publicly recognized OpenX’s climate leadership.

All of these choices were made intentionally to set the highest standard in the ad industry and concretely demonstrate that substantial, positive climate impacts are achievable in a short period of time.

The work has paid off dramatically: OpenX reduced its carbon emissions by more than 90% and was officially certified as a CarbonNeutral® Company by Natural Capital Partners, setting the highest quality standard for the ad industry. It is estimated that there are fewer than 1100 companies in the world, and no other advertising exchanges to achieve certifications such as these. In addition, OpenX also became a signatory of the Science Based Targets initiative (SBTi) and has already met the key criteria of the SBTi Net-Zero standard, far ahead of the 2030 and 2050 targets most companies have set. While companies can achieve carbon neutral status simply by offsetting their existing emissions, the SBTi Net-Zero Standard requires them to reduce emissions by more than 90 percent and only then offset the residual emissions through verified carbon removal offsets.

OpenX is in a unique position to help marketers around the world meet their own sustainability goals. Given these advancements in carbon reduction, and its transparency in discussing how this was achieved, industry partners such as Havas Media Group North America have recognized and aligned their businesses with OpenX. Additionally, OpenX fully and openly supports the challenge to adopt industry-wide standards for carbon accounting in digital advertising. As the company continues to report on its own advances in sustainability, OpenX is also fostering larger conversations, such as its recent panels at the Cannes Lions Festival, at a leadership level about how other companies are making progress and paving the way toward sustainability in new and creative ways.

Video for OpenX: Path to Net-Zero 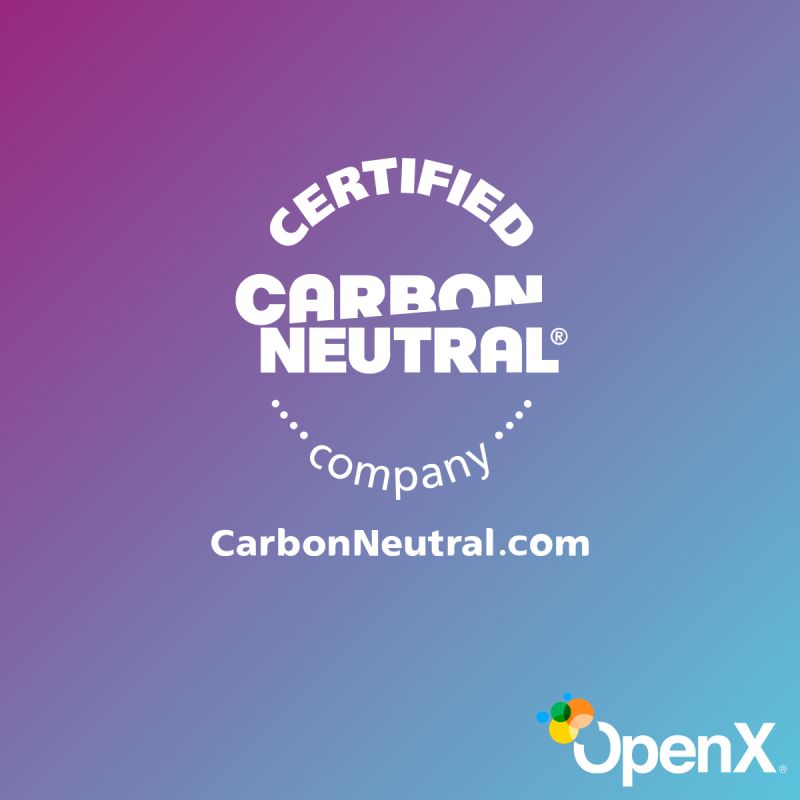 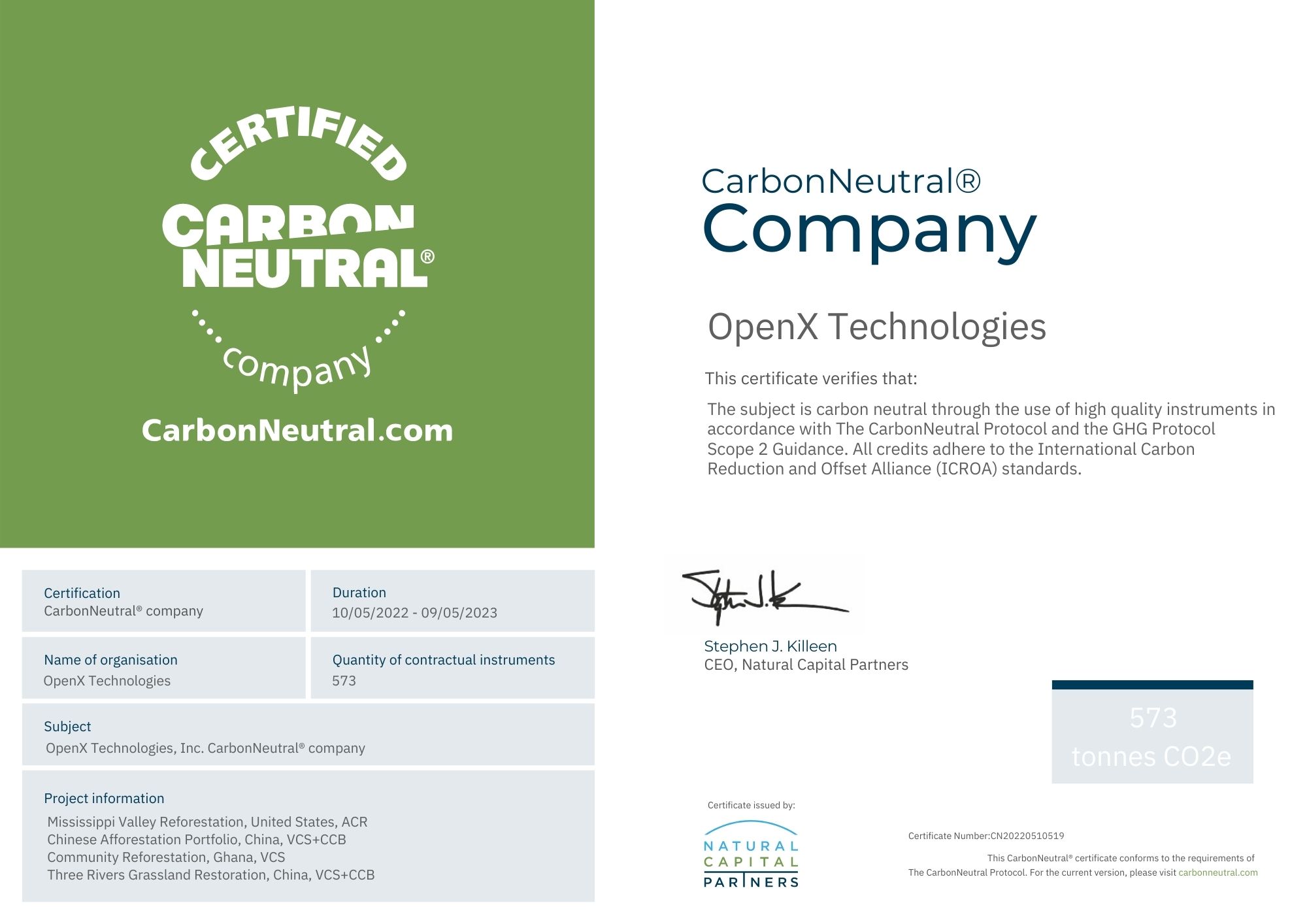 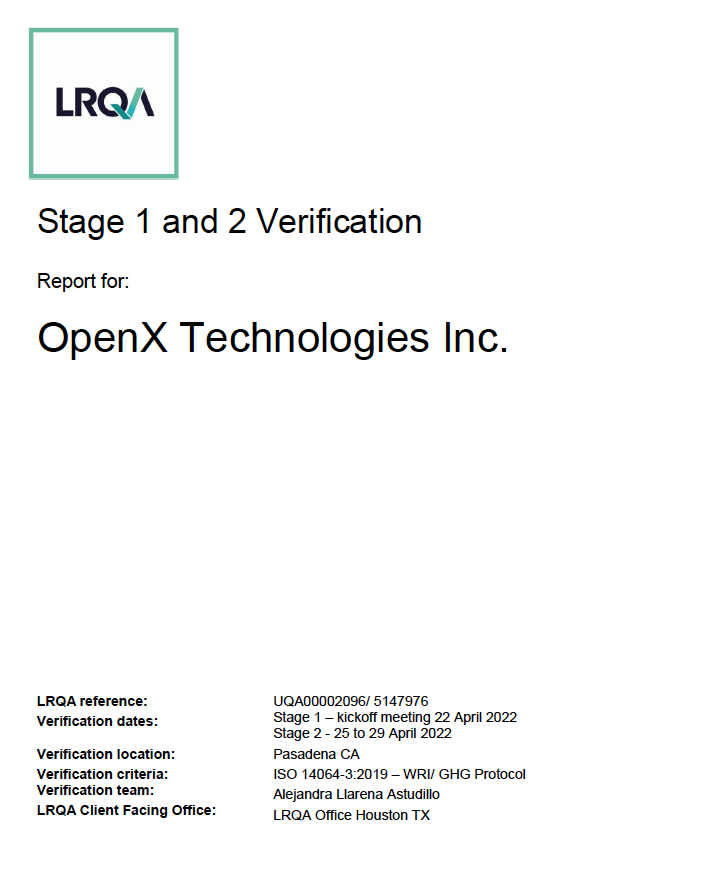