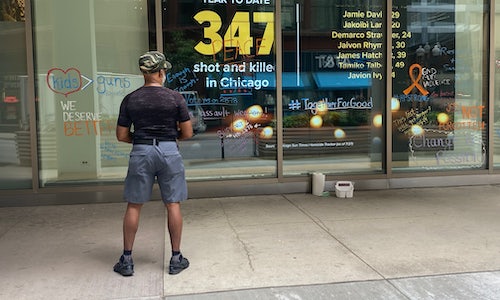 Goals: Design a public space for Chicagoans of all backgrounds and ages to share personal reflections about gun violence and collect messages expressing unity, love, outrage and longing for safer city streets.

About the Campaign: Following the deadly mass-shooting in Highland Park, IL, the community created public memorials honoring the victims. Noting the impact memorials have on a devastated community, we realized that currently missing in Chicago was a memorial for the hundreds of people killed here annually. Understanding the somber reality that Chicago has had the most mass shootings in the U.S. since 2018, JUF leveraged our prime location at one of the busiest American intersections.

JUF’s first-floor office-building windows in the heart of Chicago, features a 15-foot street facing video screen with rotating messages to the community. These windows and central Chicago Loop location gave JUF a unique opportunity to encourage emotional, continuous conversation about gun violence in our city. JUF created a new video image for the screen marking the number of Chicagoans killed by gun violence to date in 2022, with a scrolling list of names and ages of every single victim. The image is updated every few days; as of 9/ 1, 416 children and adults were listed taking almost five minutes to play to completion.

So passersby could share their own emotions, JUF invited people to write a message directly on the windows, using markers we provided.

With no budget to speak of, we set out to create a fully accessible, interactive public art display to elevate the conversation about gun violence. Tapping into the creative talent of JUF’s in-house design team and sourcing credible information about gun violence from the Chicago Sun-Times Homicide Tracker, we first created the simple and yet emotive animated graphic for the video screen. On the left side of the image was the total number of people killed by gun violence in Chicago this year. The right side of the screen featured the name and age of each person killed in 2022, updated every few days with great care and compassion.

We took the initiative to the next level by adding an unexpected element—the opportunity for people to express their feelings directly on the windows. JUF provided colorful chalk markers for public use with the goal of encouraging people to contribute their own messages, thoughts and feelings about Chicago’s gun violence.

Vital to our strategic plan was quality control to ensure the windows did not become a space for hate speech or vitriol. With a plan in place to monitor content around the clock and to remove anything offensive, the project officially launched in late-July. Markers were made available daily, Monday-Friday.

The marketing strategy included a thoughtful mix of social media promotion and on-the-ground, word of mouth buzz to get people to pause, reflect and if so inclined, to participate in the public memorial.

The true impact of the project happened with people on the street— everyone from office-workers and commuters to families, children and Lollapalooza festival goers. The windows also received attention from government leaders like Illinois Governor JB Pritzker, Chicago Mayor Lori Lightfoot and the United States Ambassador to the U.N., Linda Thomas-Greenfield who each stopped at the windows for a moment of reflection and to contribute to the public art memorial. Chicago citizens and the government officials learned about the project from both grass-roots messaging and via social media. The elected/appointed officials in turn used their social media platforms to show the windows and elevate the message.

As the days went on, a colorful mosaic of messages, images, prayers, song lyrics and more filled the large windows delivering on our awareness building goal to stir emotion and spark conversation. Conversation continued thanks to word–of-mouth, social media posts, neighborhood forums like Next Door, and media coverage in a WLS-AM drive-time radio interview about the initiative.

It's estimated that the Chicago Loop has a residential population of about 20,000, and a worker population of about 370,000. Of the tens of thousands of people who have seen or been touched by this project there are a few moments of impact that stand out: the step-brother of a 24-year-old man whose name is on the list visited the memorial to honor his loved one; a woman who paused on the busy street to quietly pray; the person who simply wrote “mom” within a heart. 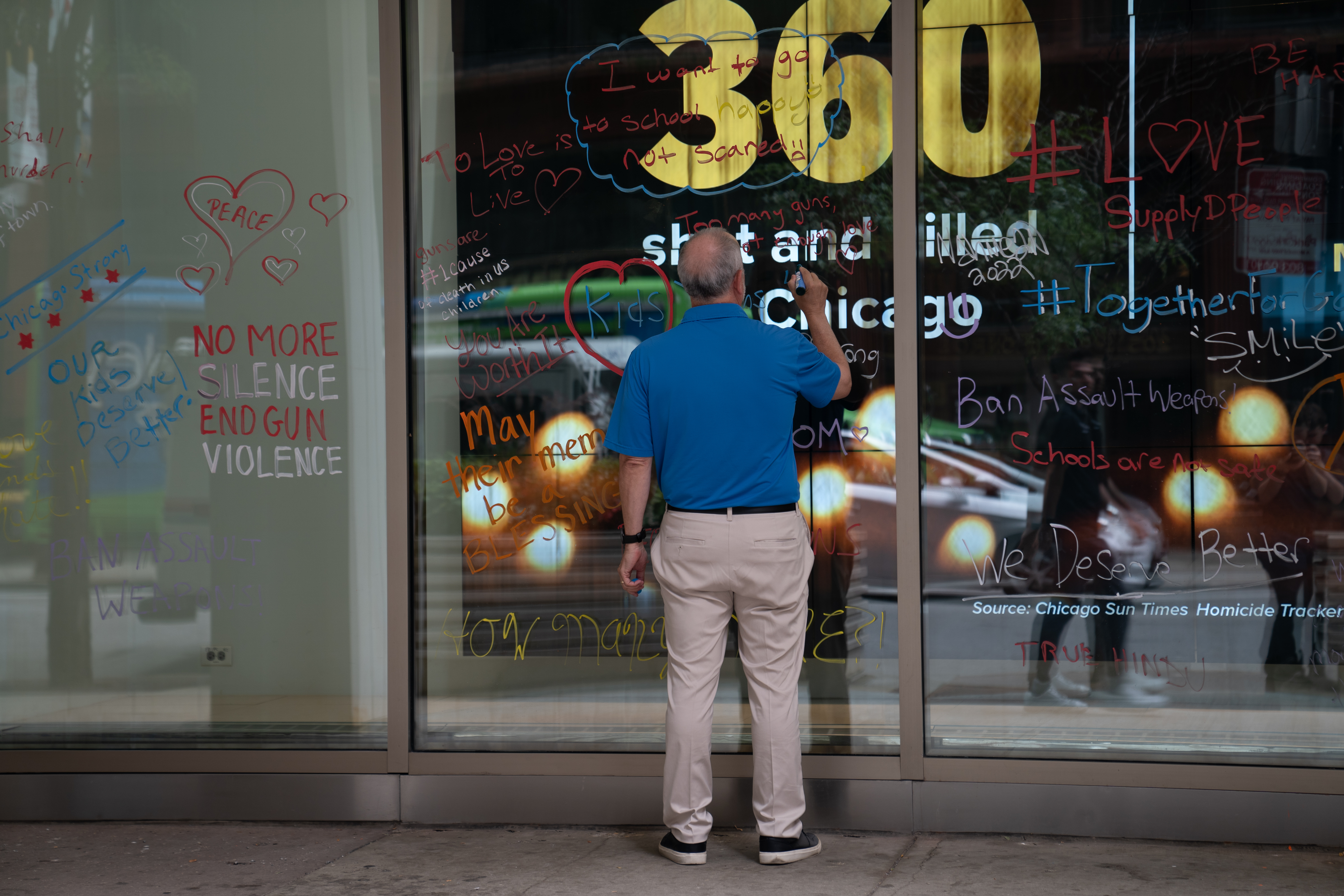 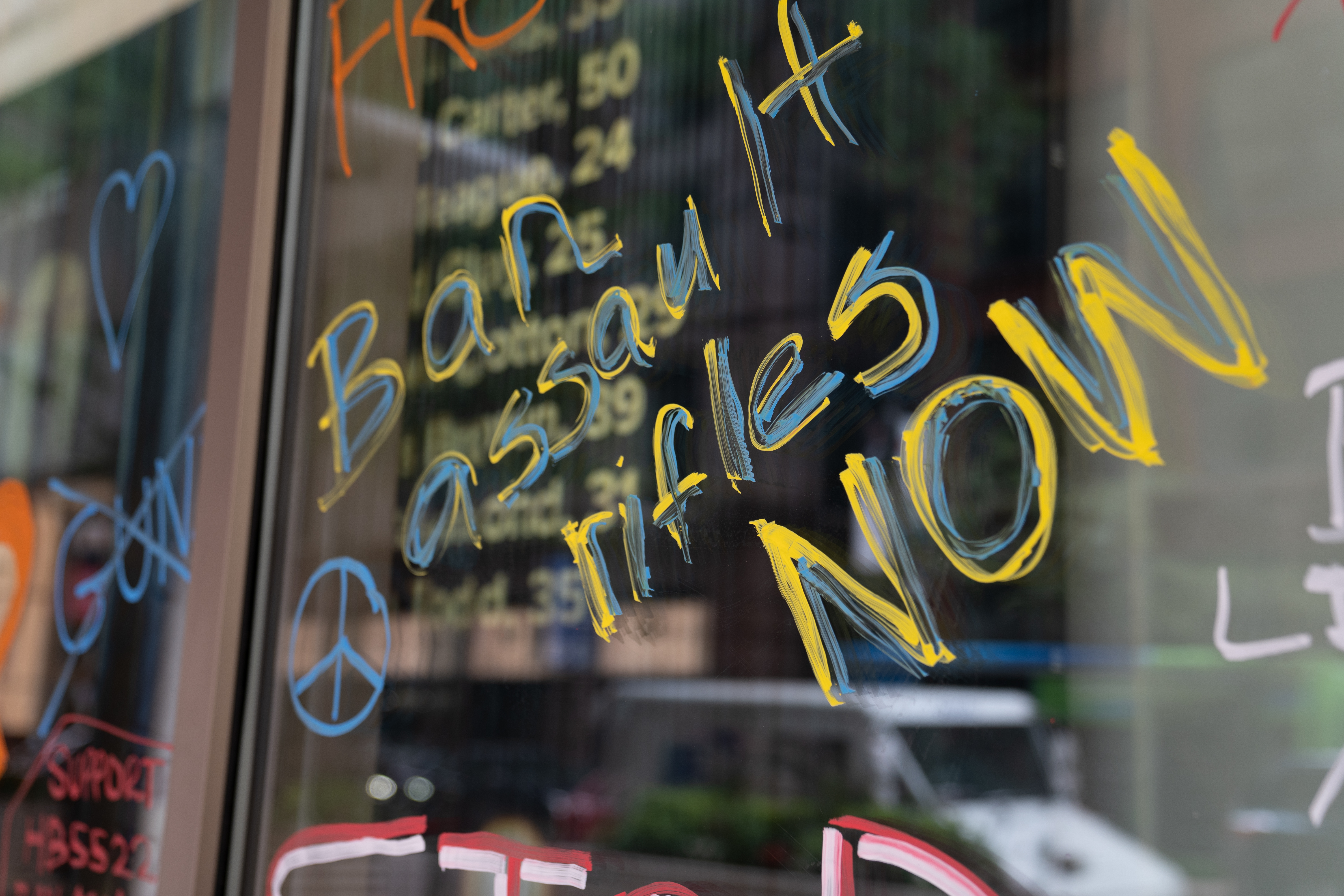 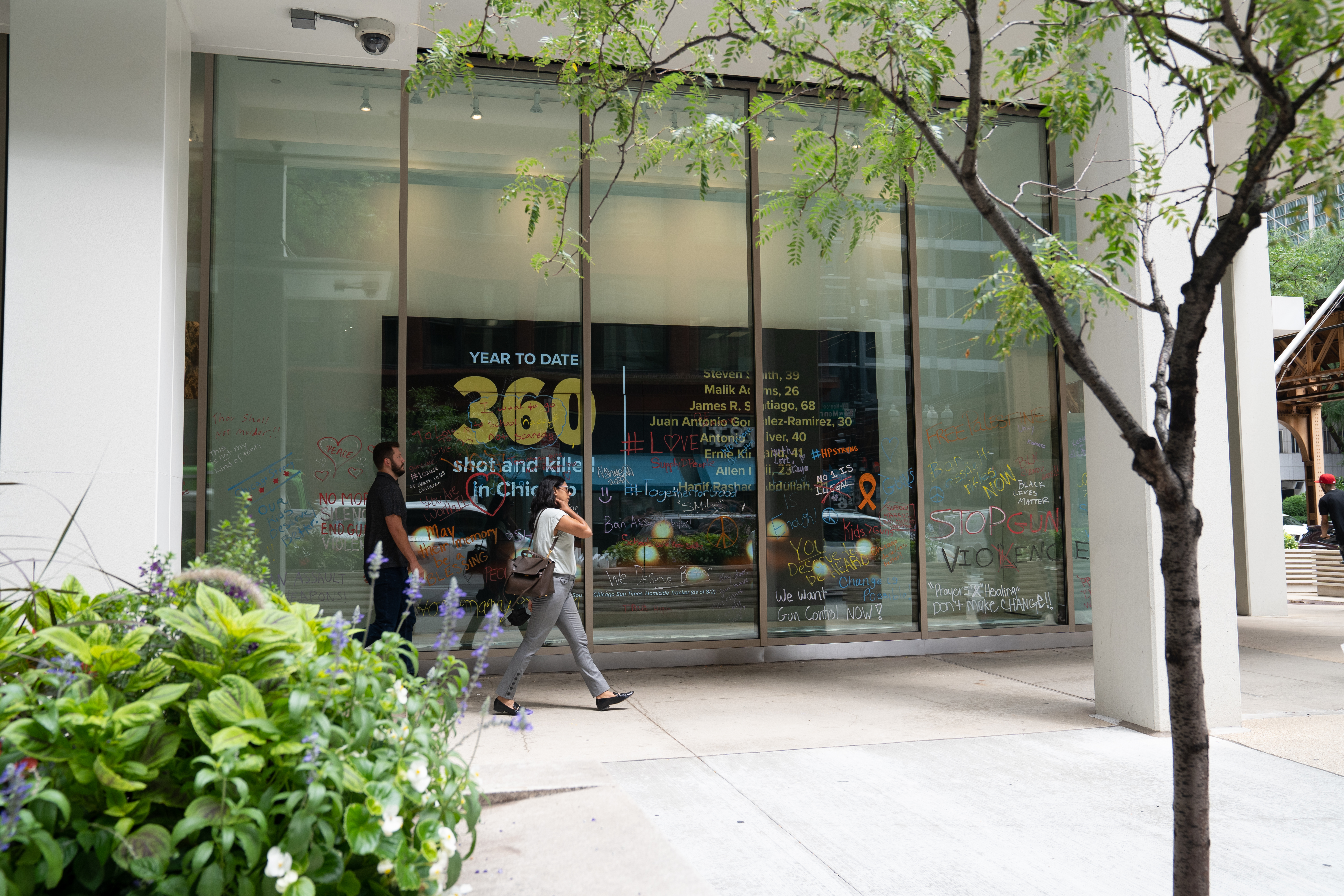 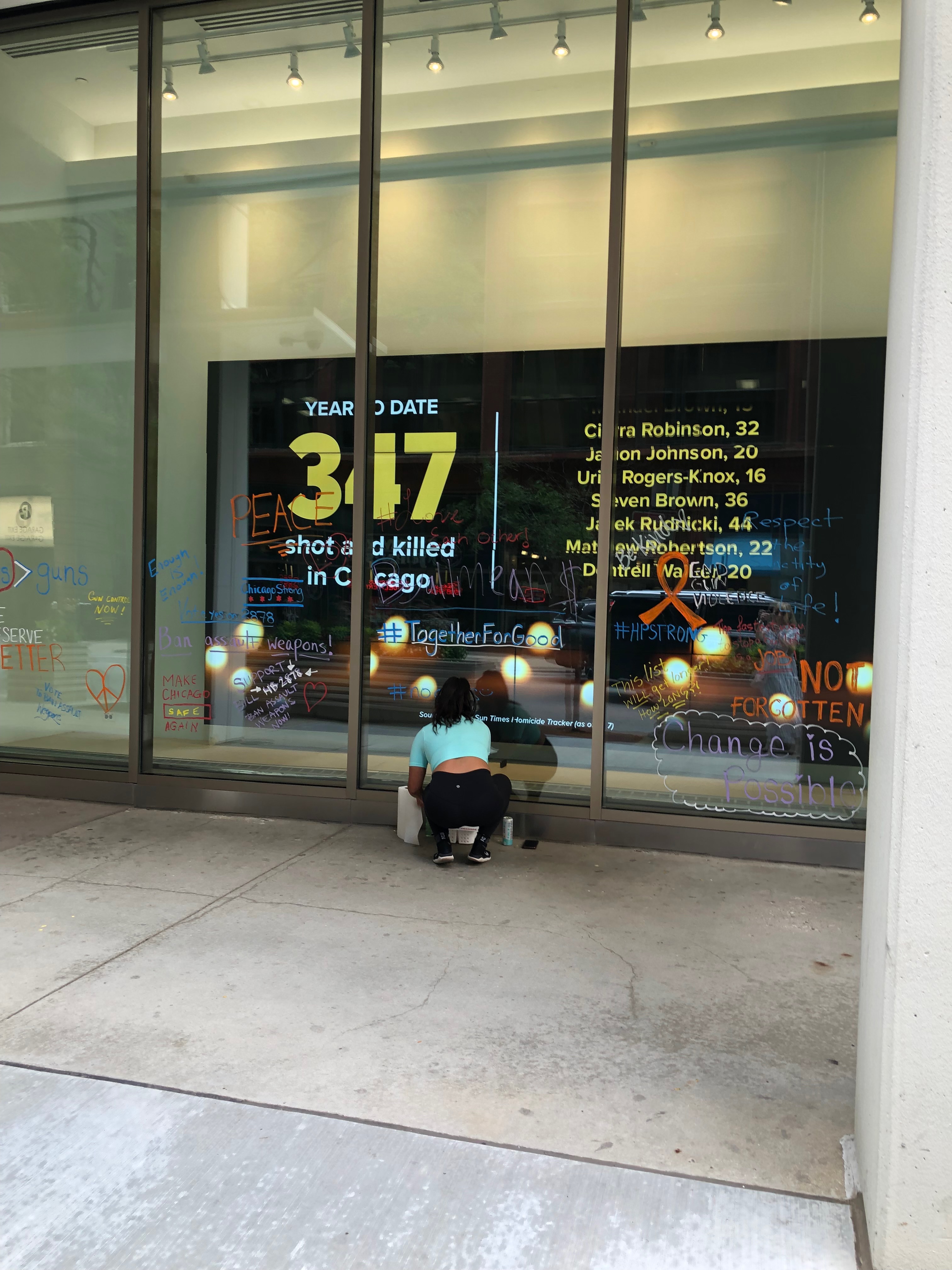 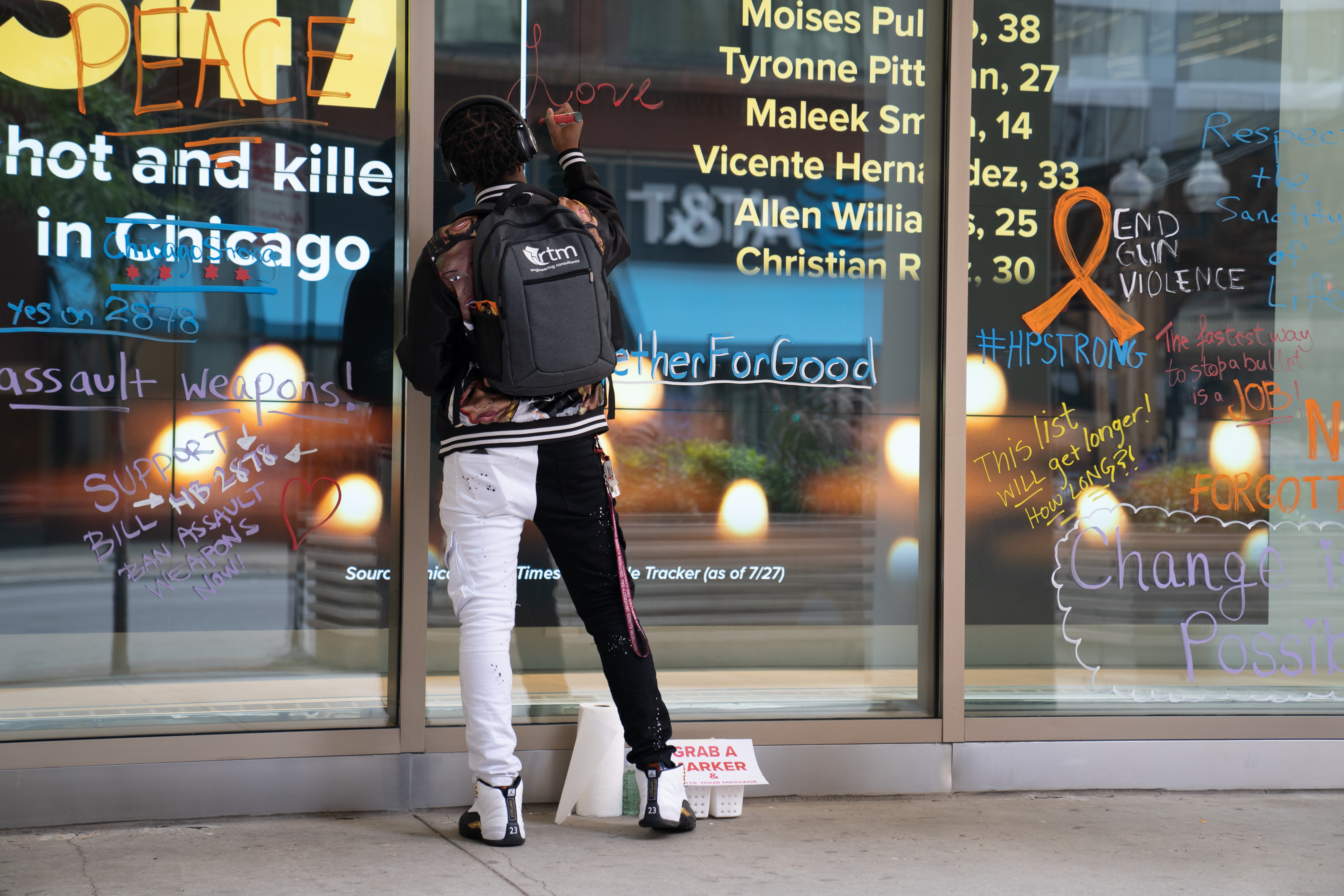 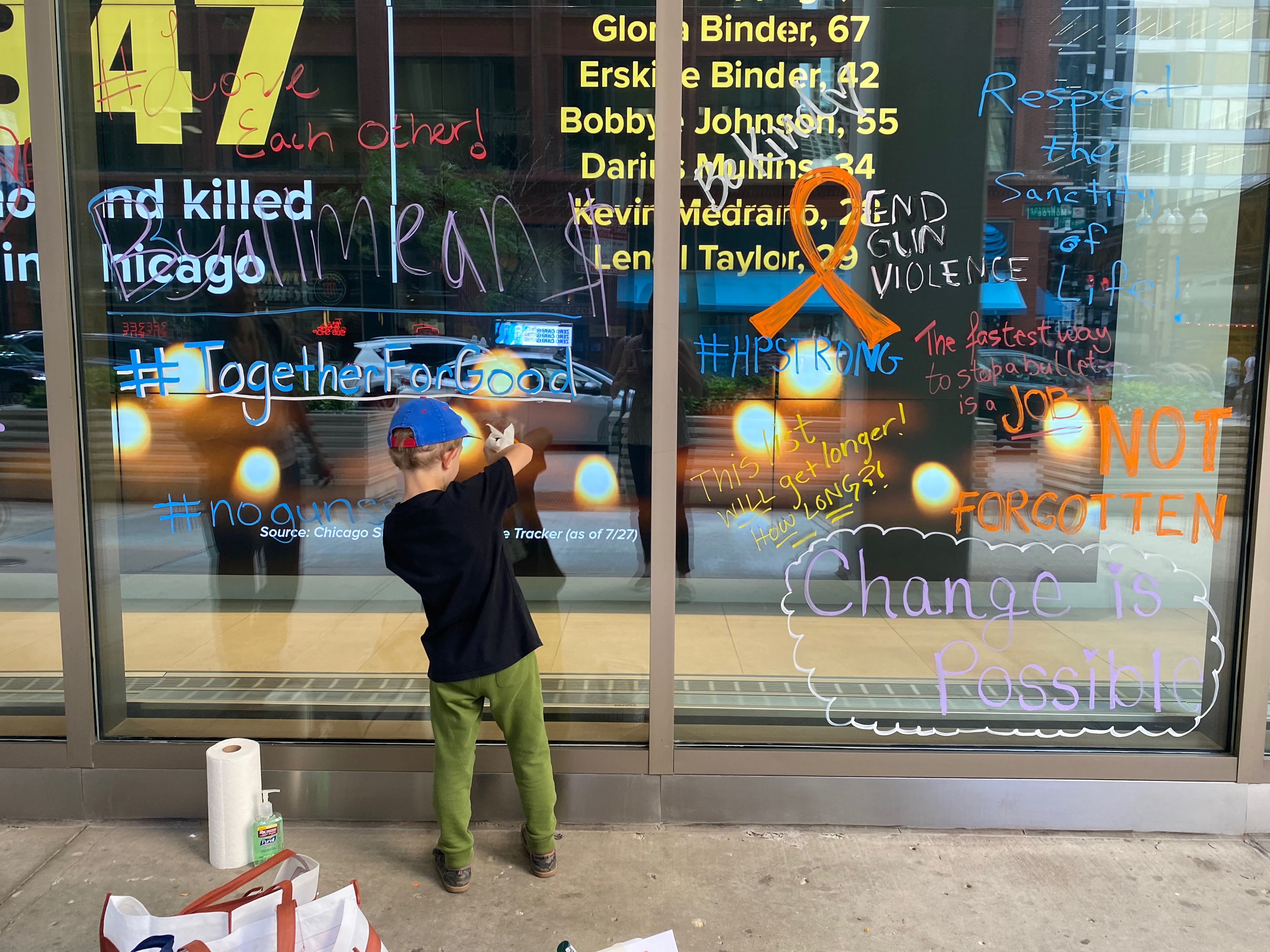 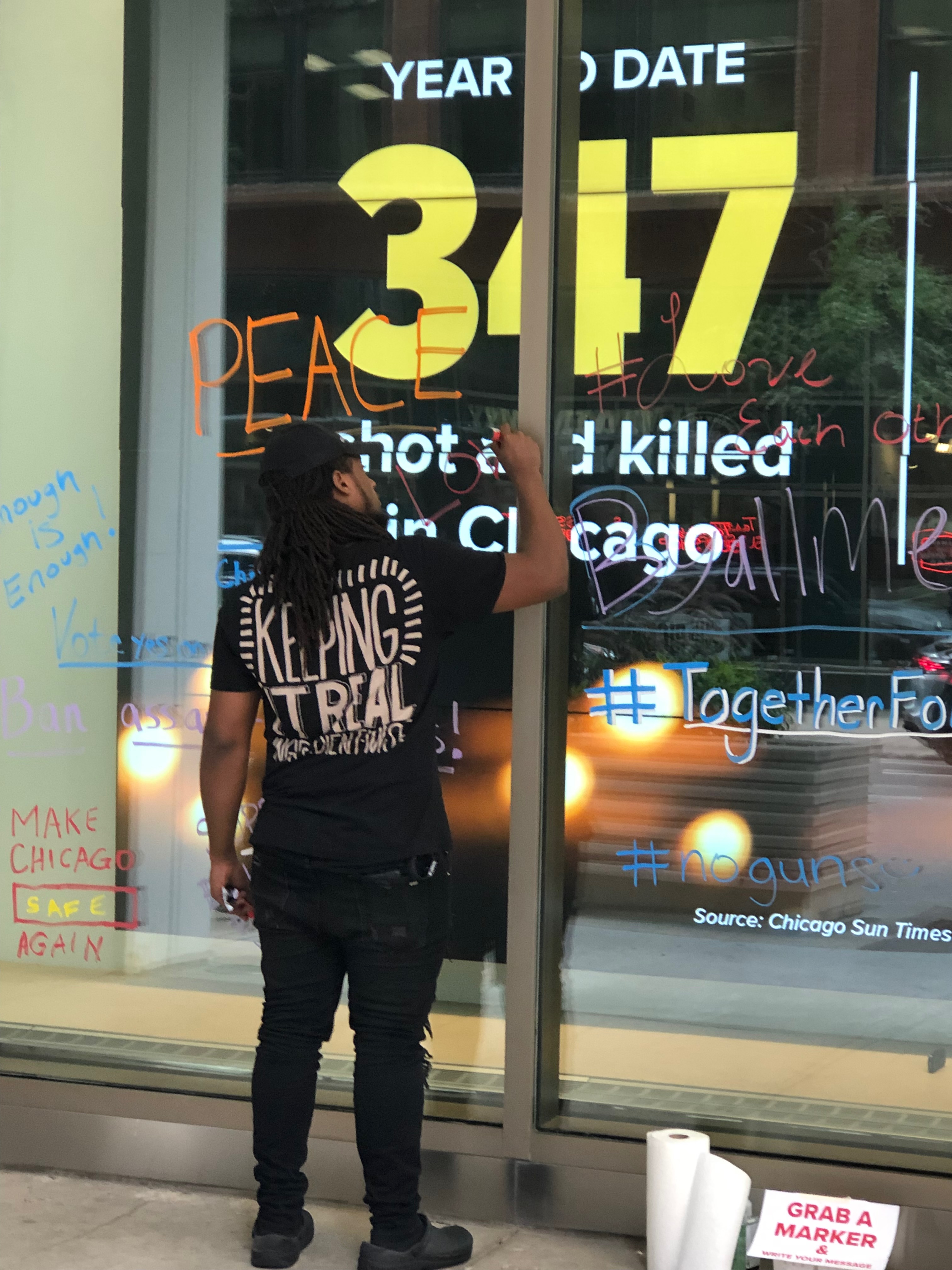 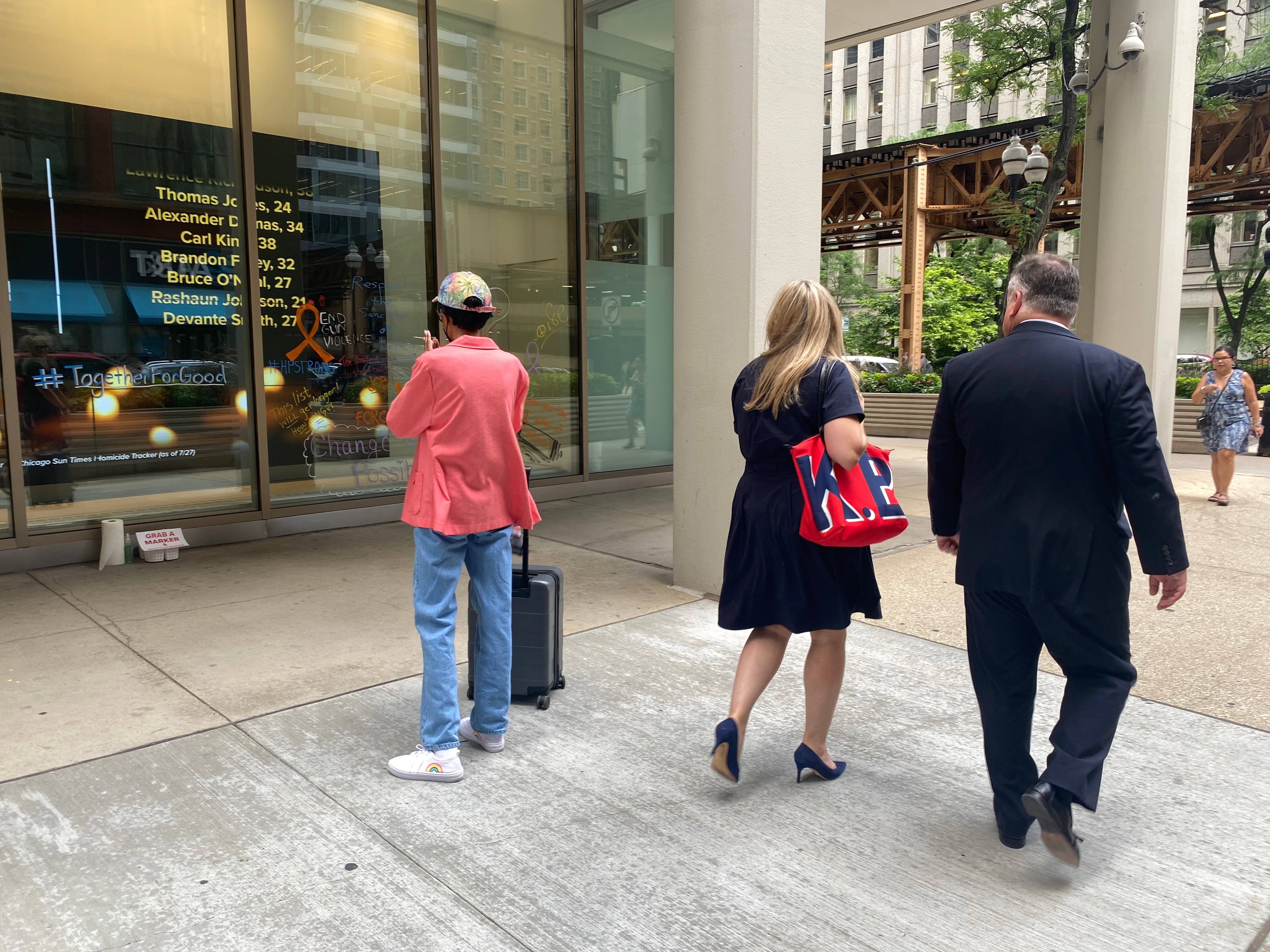 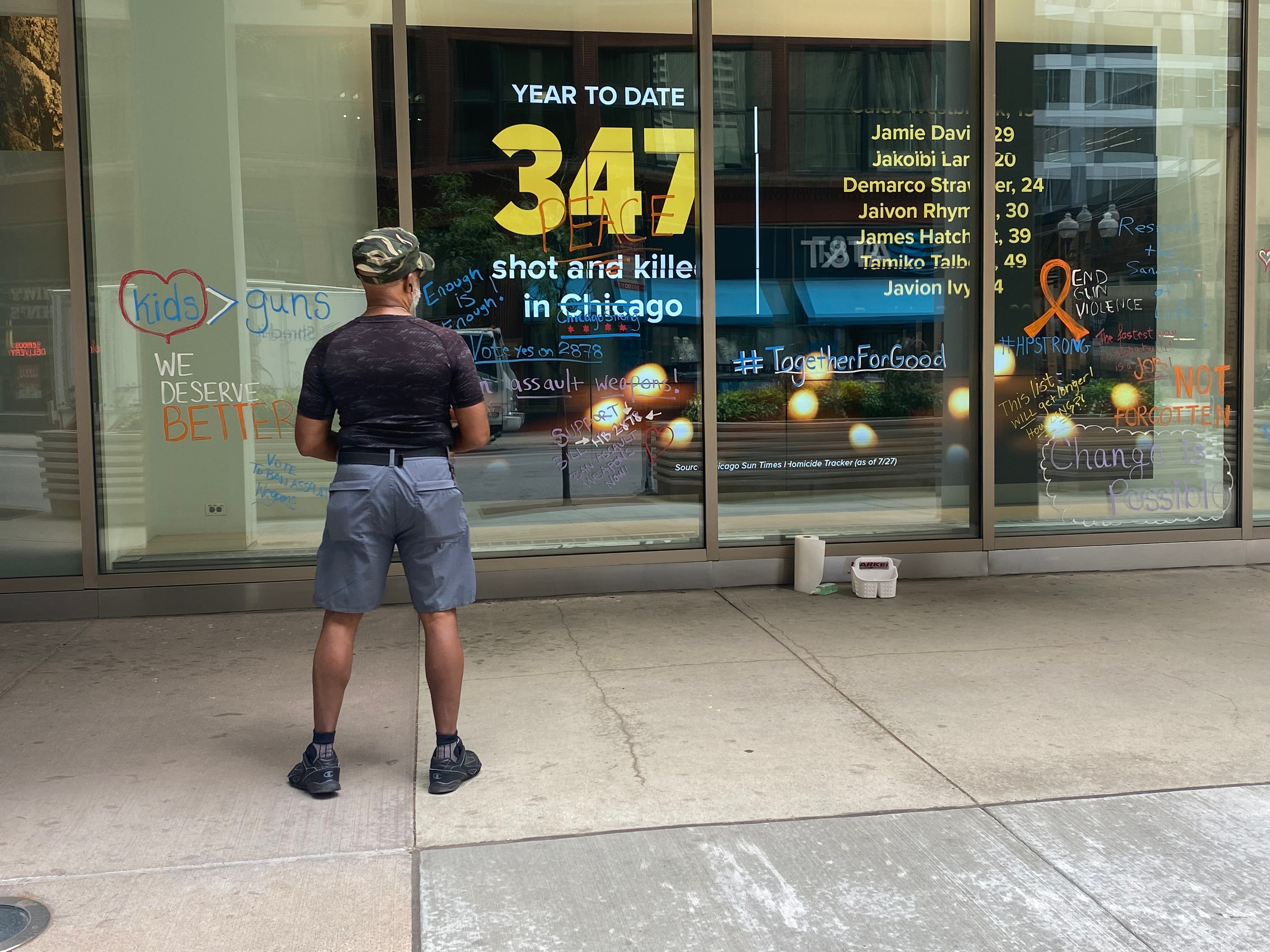 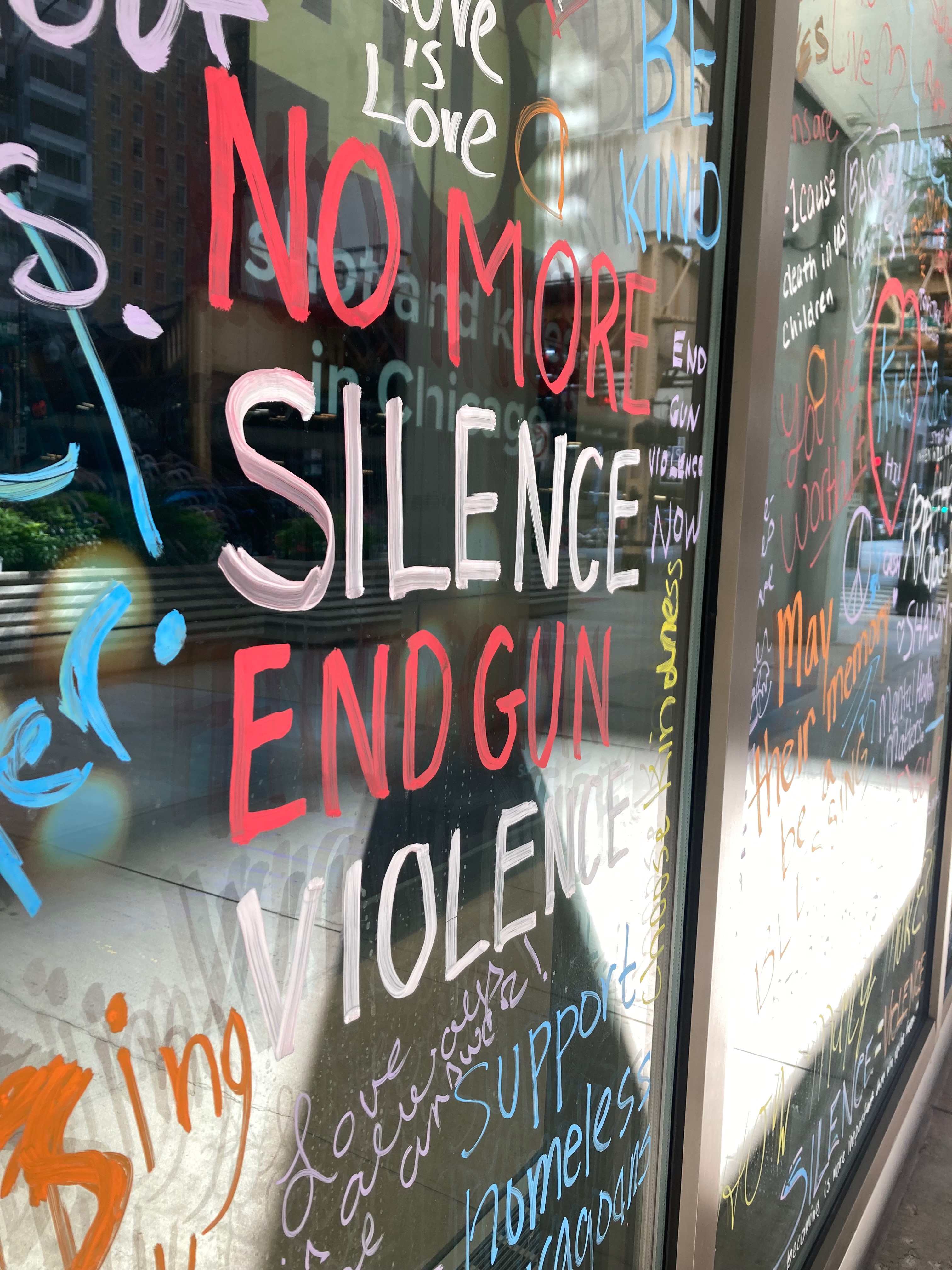