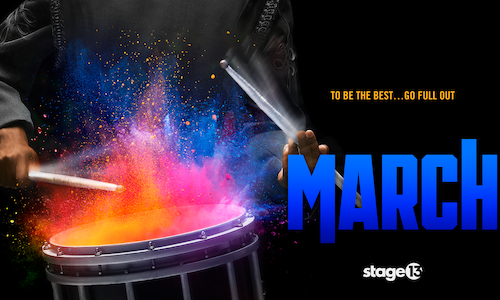 Stage 13’s docuseries MARCH was produced to shine a light on Historically Black Colleges and Universities (HBCUs), specifically through the lens of one such college’s illustrious marching band. Viewers were invited to step into the riveting and demanding world of the Marching Storm, the award-winning band at Prairie View A&M University, as its members strived to climb in the rankings, balance the demands of life and school, and carry the bold legacy of the university. March debuted on The CW network in January 2022.

Each one-hour episode of MARCH showcased the dedicated and talented band and staff members including musicians, drum majors, dancers, flag team and faculty members. The series chronicled their pressure-filled journey to become the top-ranked HBCU band in the land after starting the season at #8, as ranked on ESPN’s The Undefeated. While MARCH shared personal and unique stories from many of the more than 300-person marching band, it also explored the legacy and culture of Prairie View A&M, highlighting how the Marching Storm is an integral part of that rich history.

Stage 13’s production of MARCH was not without its share of obstacles along the way. In addition to a short production schedule of only a few months that began in Fall 2021, the producers also had to face the challenges of shooting at a college in Texas during the pandemic amidst frequent production delays. On top of that, a looming airdate of January 2022 meant that the show was still being produced when the first episodes were starting to air.

With the limited time for production and no runway for marketing support, they had to raise awareness the most efficient way that they could. By partnering with HBCU publications, they could promote the show directly to the HBCU community who would be most likely to watch the series, and also would want to promote to their networks. They strategically built content amplification programs with HBCU Buzz and Watch the Yard, who drove continued awareness and support for the series amongst the HBCU community throughout the course of the two-month series run.

This support included content promotion across social media, including Instagram, Twitter, Facebook, and TikTok. There was also a custom email newsletter campaign, blog posts, social media challenge, and a digital poll activation for fans to vote for their top HBCU marching band.

Stage 13 also built brand partnerships with brands including Frito-Lay, who did product placements in the series and also agreed to post co-branded promo videos on their social channels to promote the collaboration. They also created a MARCH Spotify playlist to build awareness of the show’s chart-topping band music to Spotify listeners. They collaborated closely with Prairie View A&M University marketing team to drive awareness on campus through students screenings and promotional item giveaways. Stage 13 also held a virtual premiere and panel featuring the series talent, and sent branded spirit boxes to select members of the press. Stage 13 submitted MARCH to the Emmy Awards for Best Unstructured Reality Program and Best Casting, and had a For Your Consideration campaign to drive awareness throughout the awards season.

MARCH was a resounding success, and the results of this campaign were incredible. The series has a 100% rating on Rotten Tomatoes, with critics saying:

The results of MARCH series and marketing campaign made a massive impact. MARCH shined a bright light on a culture and institution that until now had rarely been seen in entertainment, and the HBCU community could finally see their schools being celebrated and getting the love and respect they long-deserved. 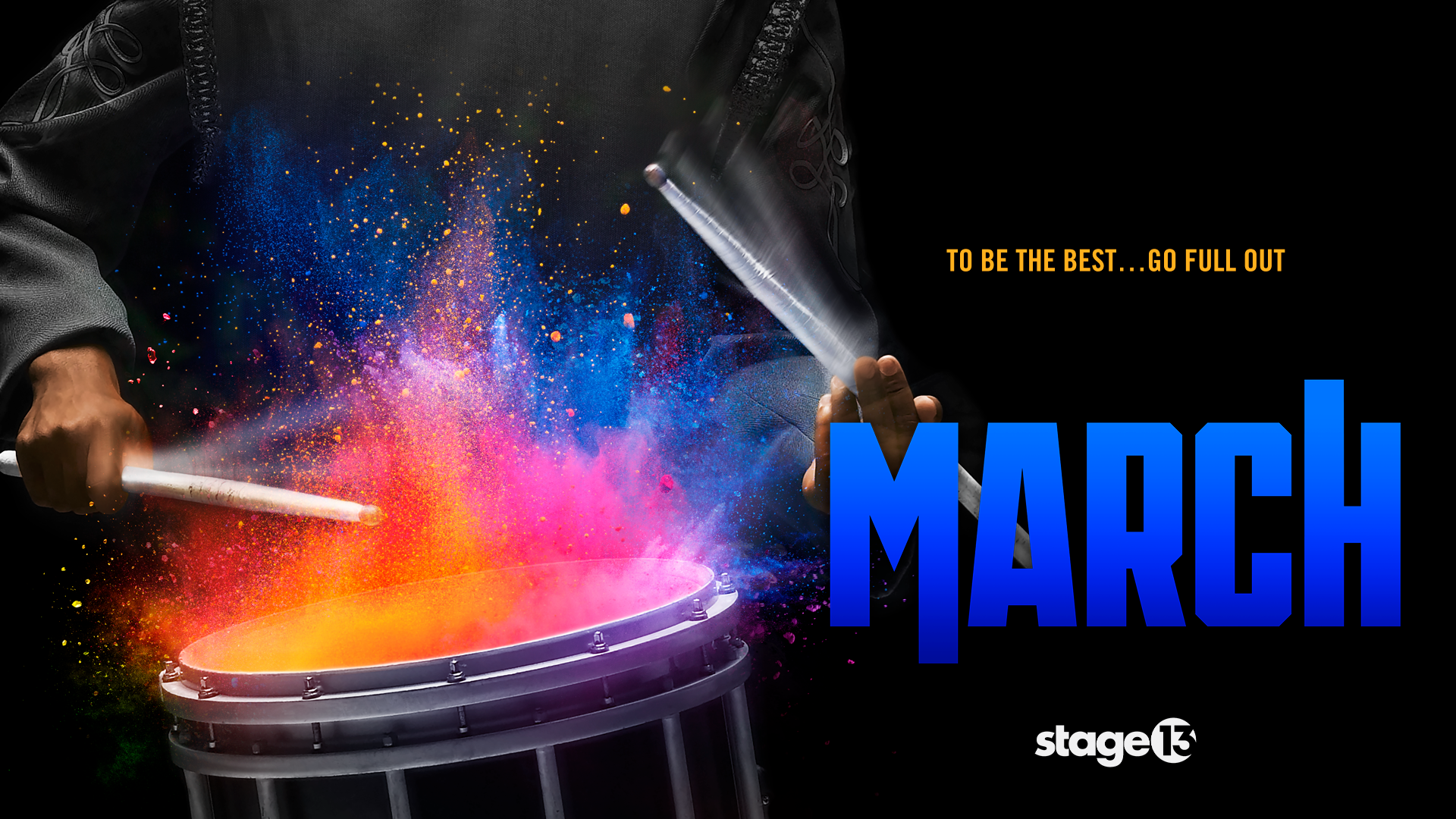 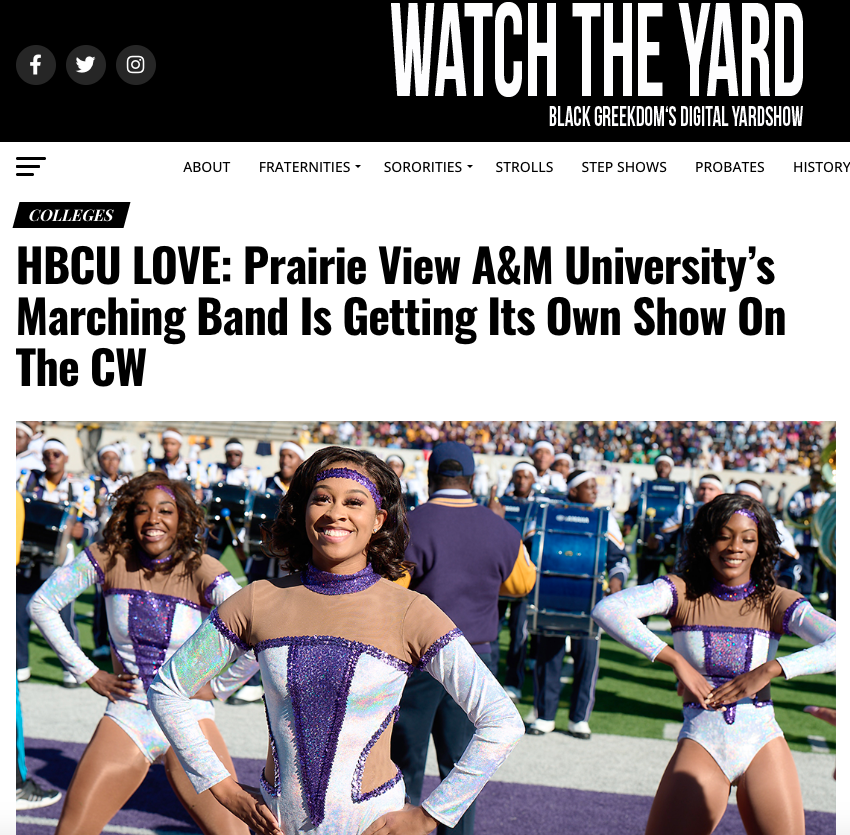 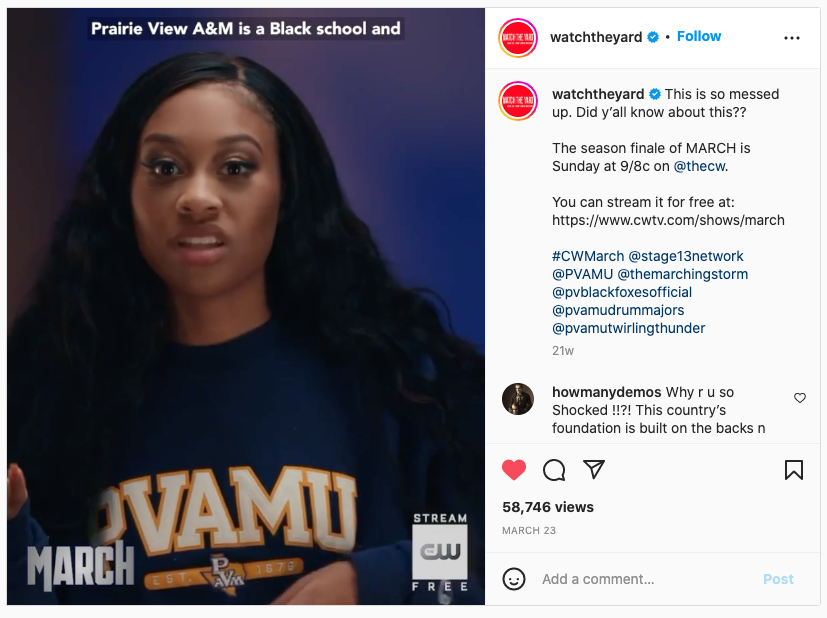 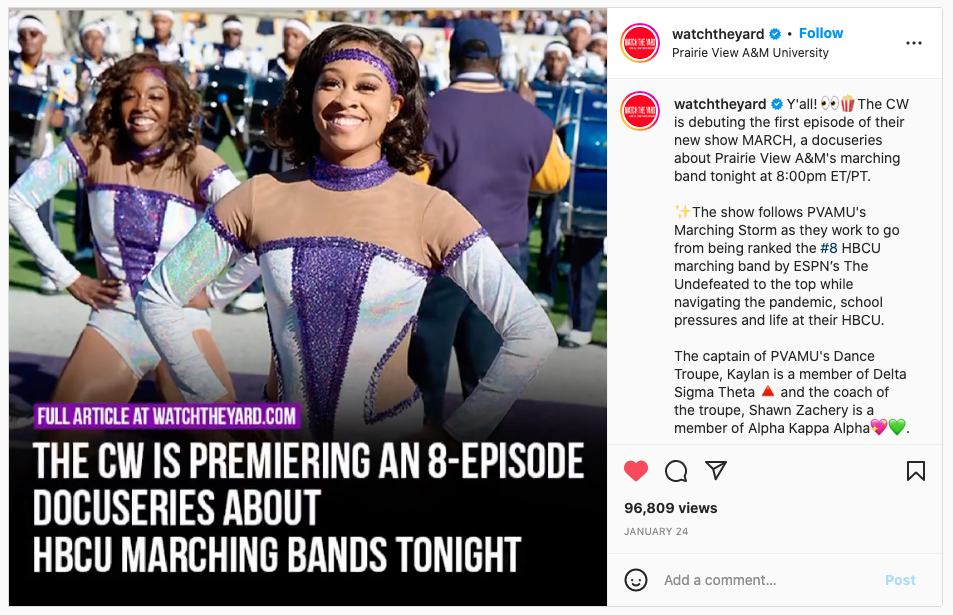 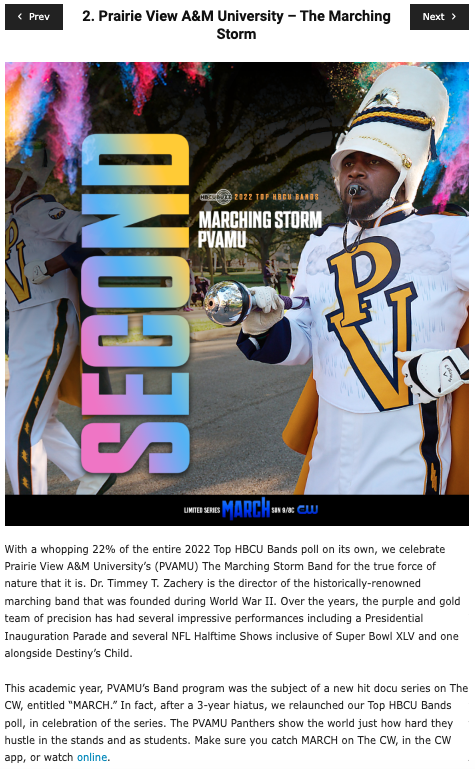 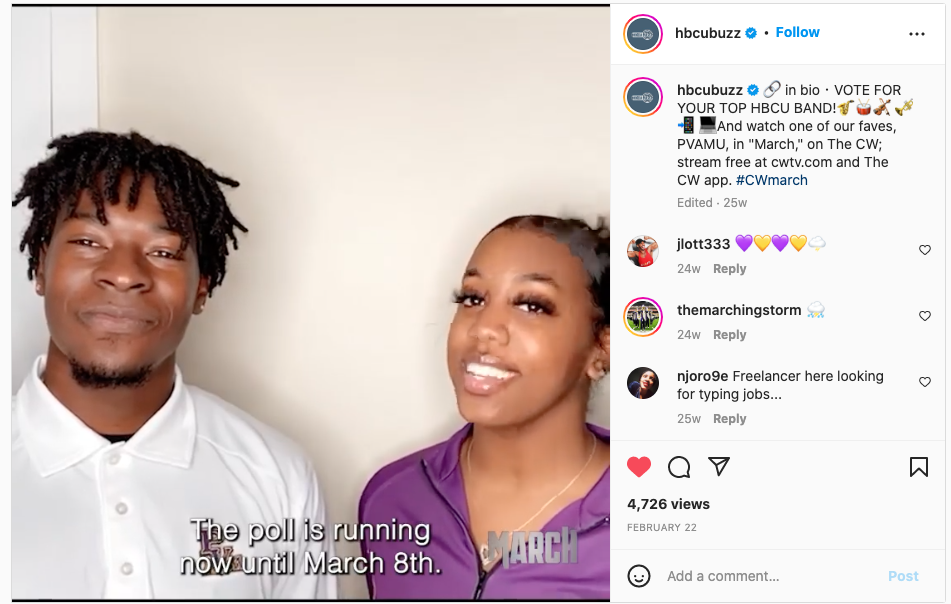 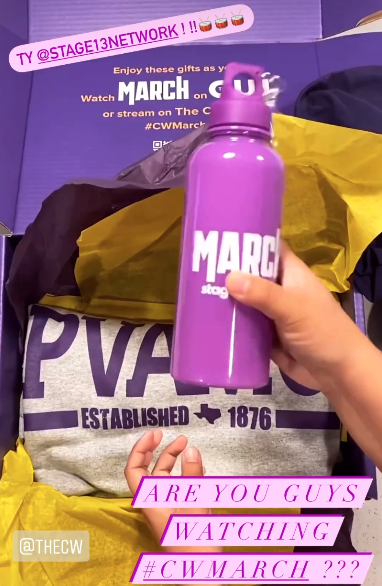 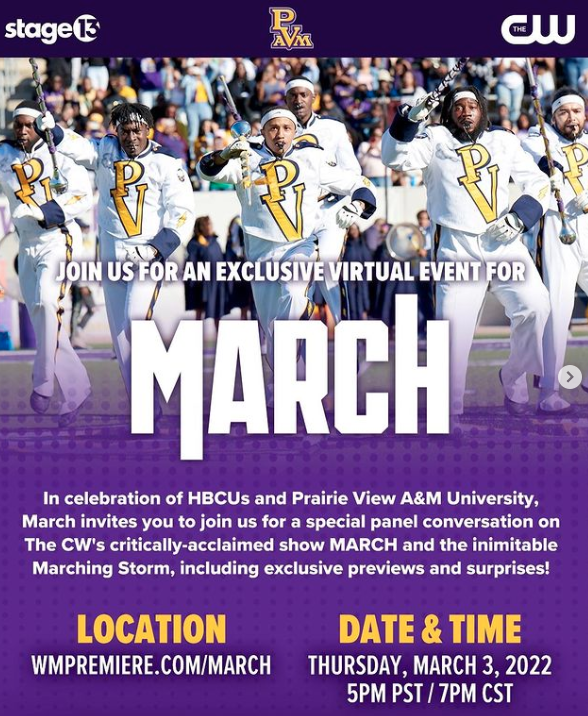 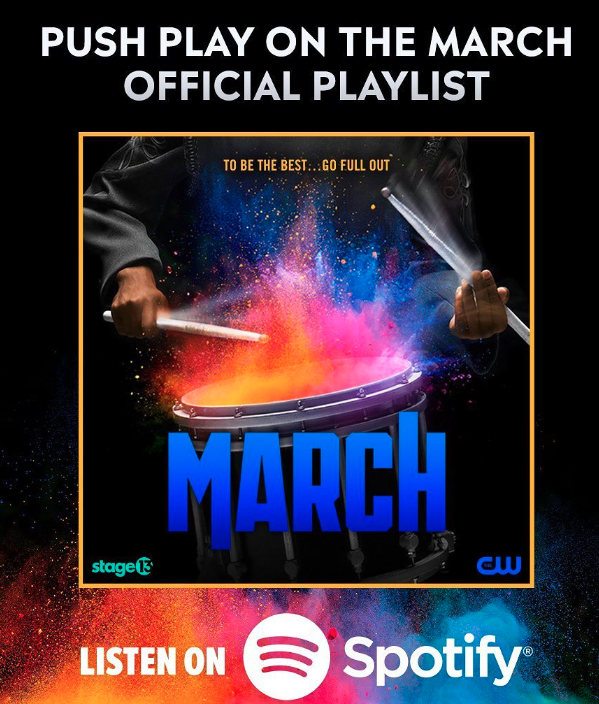 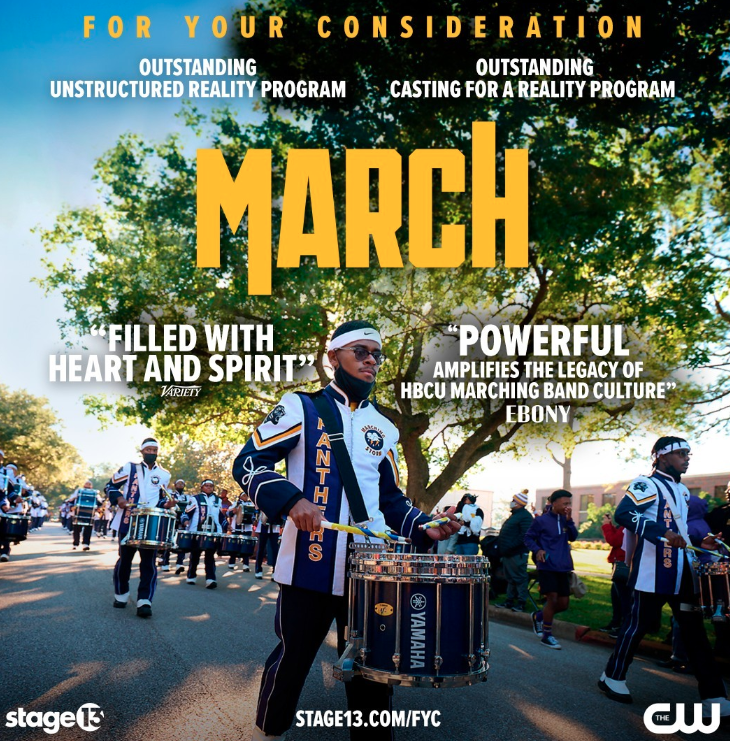