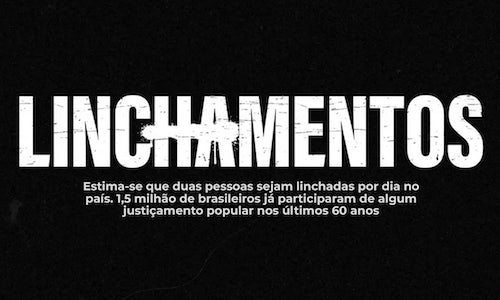 LYNCINGS Deaths from justice do not stop growing in Brazil, especially in Espírito Santo. Reporter Record Investigation travels to the state to understand why people are victims of crimes committed by crowds Barbarism, cruelty, savagery. These words define, without exaggeration, the way Brazilians are lynched to death after a rumor or false news. In recent years, lynchings have only increased, especially in Espírito Santo. A sad phenomenon that made reporters Marcus Reis, Flávia Prado and Michel Mendes travel to the state to understand why so many people are victims of crimes committed by several people. From 2010 to 2020, there were 153 death sentences on the streets of the Greater Vitória region, according to the University of Vila Velha. Antônio, Joel and Alaílton are among the dead. All were loved by the community where they lived. But a dangerous combination of lying and outrage put an end to all three's lives. Antonio was beaten to death with clubs. The 74-year-old's execution took place because a rumor spread that he was a child rapist. In the lynching of Alaílton, 17 years old, kicks and punches made him faint. Taken to the hospital, he could not resist and died. The young man was punished because of a rumor that he had messed with a girl on the street. Our reporters came face to face with two accused of executing the young man. Joel's justice case began with a fight between neighbors. The situation worsened when one of them claimed that he had seen Joel at the gate of his house, showing his genitals to women and children who were passing on the street. And authorities and experts explain what is behind the significant increase in cases of lynching in the country.

Recounting cases of the most iconic lynchings that took place in Brazil, in addition to rescuing the origin of these lynchings in the country. There is a whole historical context behind this cruelty that persists to this day in Brazilian culture.

Cause impact and reflection on society as a whole. Also provoke the judiciary to stricter laws in lynching cases.