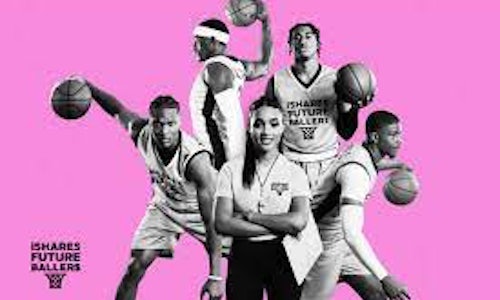 Current investing culture, with talks of overnight wins in meme stocks and overnight crypto millionaires, is leading more and more young investors into the trap of impulsive financial thinking, sometimes with terrible outcomes.

At the same time, pro athletes –especially basketball players - have been stereotyped in pop culture as being the epitome of short-term financial thinking, when in fact, pro ballers have become savvy business operators during and after their NBA careers.

This inspired iShares to showcase the importance of long-term investing through a completely new kind of brand deal for pro athletes. They recruited a team five top incoming NBA rookies to commit to investing a portion of their sponsorship dollars toward their financial futures. We called this “team” the iShares Future Baller$.

Each player also committed to being coached on healthy financial habits and the importance of long-term investing by financial influencer Lauren Simmons.

Together, they created videos explaining the program, and a suite of educational videos that cover key investing themes. Content was distributed through the players’ and coach’s social accounts, iShares’ own properties and channels, and through a brokerage partner where iShares ETFs were available for purchase. Targeted paid media with sports and lifestyle publications and social media platforms helped extend the message beyond traditional financial outlets.

All laddering up to BlackRock’s purpose of helping more and more people experience financial well-being in a completely new way for the category.

The team wanted to reach new and younger investors to help them at the beginning of their financial journey. And while iShares is a well known brand among financial professionals and savvy investors, and is covered at length in financial media, young investors aren’t necessarily reading traditional finance publications like WSJ or Bloomberg every day. To be relevant, and break into the media young investors are consuming, iShares had to find a commonly shared passion point outside of finance. Based on iShares research, sports, specifically basketball, rose to the top.

The challenge then became how to make investing relevant to basketball. iShares saw that in pop culture, pro athletes - especially basketball players – are perceived as being impulsive financial decision makers who don’t think long term. And with the rise of meme stocks, crypto, and gamified investing, it seemed young investors shared some of these same short-term focused financial behaviors.

iShares saw this as an opportunity to step in and educate both pro ballers and young investors on the importance of long-term investing.

iShares did this by structuring a first-of-its-kind sponsorship deal. Any brand could sponsor an athlete, but a truly authentic brand partnership meant that we’d need to require athletes to invest in their own financial futures and agree to becoming students of investing themselves.

The major wrench: iShares had to predict which players were likely to enter the draft, and be drafted, before the draft even happened. We scouted five top players, focusing on talented young players who also had considerable social media influence. We then brought on a well-known financial influencer, Lauren Simmons, to coach the team on healthy financial habits.

Because of financial marketing regulations, we had to find a coach who was qualified to educate players, but who could avoid pitfalls around recommending specific products or giving personalized investment advice – a major no-no.

With carefully crafted scripts and lots of media training, iShares created promotable educational content on key investment themes, and pre-seeded the program with the press, under embargo, so the story could break prior to the draft when NBA media interest was at its summer peak.

iShares had a phased approach when it came to launch. 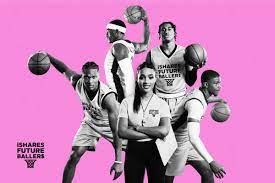