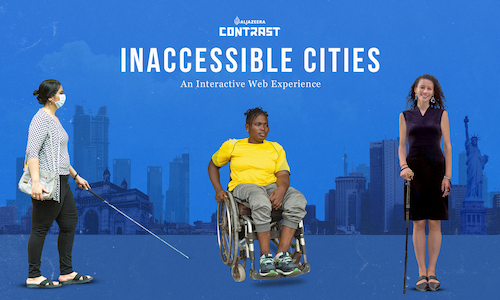 Inaccessible Cities is an interactive web experience that offers an intimate look into the everyday struggles of three women living with disabilities in NYC, Lagos and Mumbai. The project is produced by AJ Contrast, Al Jazeera Digital’s three-time Emmy-nominated media innovation studio. It combines diverse multimedia assets with our award-winning reporting to create a multi-city experience that foregrounds the systemic, legal and structural barriers faced by people with disabilities – one of the most excluded and underrepresented communities in the world.

More than one billion people – approximately 15% of the global population – experience some form of disability. Unlike other marginalised groups, anyone can develop a physical disability because of an accident, illness or, simply, old age. And in cities – which continue to grow each day – without accessible public transport and infrastructure, people with disabilities find it very challenging to fully and independently participate in society.

Through Inaccessible Cities, we want to underscore the importance of talking about disability rights as a social justice and human rights issue that affects millions, especially in the Global South where disability is more prevalent. Out of all people with disabilities, 80% live in the developing world.

Covering the issue that rarely draws attention from the mainstream media, we wanted to go one step further and create an interactive that would be intuitive, informative, highly engaging, and accessible to all our audiences, including those with disabilities. By creating a fully accessible digital experience, we want to set the new standard for inclusive digital news content and instigate the conversation about digital media accessibility.

We decided to explore the issue of accessibility and disability through the stories of three women, since the majority – three quarters – of people with disabilities in low and middle-income countries are women. And they are at even higher risks of poverty, neglect and abuse than men. In Inaccessible Cities, we meet Rebecca Lamorte, a former New York City Council candidate, Olajumoke Olajide, an athlete from Lagos, and Nidhi Goyal, an activist and comedian from Mumbai.

A mobile-first experience that is adapted for desktops and tablets, Inaccessible Cities features vertical scrolling, and has a menu function that allows users to choose their own path through the story. We combined a range of multimedia assets, including original photography, video, audio, text, infographics and gamification to create a non-linear but cohesive and nuanced narrative.

The gamification simulates the daily commute of our characters and is grounded in their and many other people with disabilities' experiences. It is meant to give users a sense of what it feels like to navigate NYC, Lagos and Mumbai while being disabled – to evoke frustration and discouragement – feelings that are commonly felt by those impacted by inaccessibility of these cities.

Inaccessible Cities is a global editorial endeavor bringing together local and international talent. AJ Contrast is a small team of women from different backgrounds: Indian, Lithuanian, Brazilian and Somali-Canadian. In each city covered in the project, we hired local documentary photographers: Ebunoluwa Akinbo and Omoregie Osakpolor from Lagos, Kanishka Sonthalia from Mumbai, and Alexey Yurenev based in NYC. Three teams from India, Brazil and Canada oversaw the development of the website.

As is the case with all AJ Contrast projects, the storytelling was driven by our core values of collaboration and co-creation with our subjects – those who are hardest hit by conflict and inequality. Sarah Kim, disability journalist with cerebral palsy from NYC, and Kelechukwu Ogu, a blind journalist from Lagos, joined the team as reporters and writers. In addition to helping us craft the narrative, they ensured that the reporting addressed the most critical issues whilst grounding them in the stories of those directly impacted by inaccessibility in our cities.

With Inaccessible Cities, we not only report about the challenges faced by people with disabilities, but also create a website that is fully inclusive of our audiences with disabilities. Many people with disabilities are unable to consume digital media, and, thus, are excluded from the national and local discourses. This becomes an even more pressing issue when our interactions and life in general go virtual during pandemics and natural disasters.

The interactive web experience is compliant with the Web Content Accessibility Guidelines (WCAG) 2.1 Level AA standards. It features audio descriptions, alternative text for images and gamification, operable navigation etc. We created an additional simplified version of the website for people with sensory disabilities and anyone else who has difficulties accessing the original website. The result is that Inaccessible Cities has broken new ground, as one of the first accessible news interactives of its kind.

We also hosted a Twitter Space, an IG Live and an AMA on Reddit with two of our project’s main characters, engaging our audiences with the issues of physical and digital accessibility and disability rights, raising awareness and focusing on solutions. The AMA on Reddit’s NYC community subreddit (675k members) was a rousing success – it outperformed this subreddit’s best AMA by nearly 3 times.

Inaccessible Cities has received significant praise from disability rights activists as well as people working in public policy. “Persons with disabilities are too often not heard in our nation's capitols and don’t see themselves in outcomes. What Inaccessible Cities does so brilliantly is bring together data, geography, and laws by centering personal narrative – not as a tool, but as the essential way to build community,” said Patrick Gaspard, the president of the Center for American Progress (CAP).

Inaccessible Cities has won a 2022 Gracie award for the Best National Website, One World Media award, and three Drum Online Media awards for innovation, including the Jury Grand Prix. It has been nominated for an Emmy and two Online Journalism Awards.

Through Inaccessible Cities, we, at AJ Contrast, seek to demonstrate our commitment to and aptitude for reporting on urgent issues while prioritizing innovation, creativity and accessibility for all. 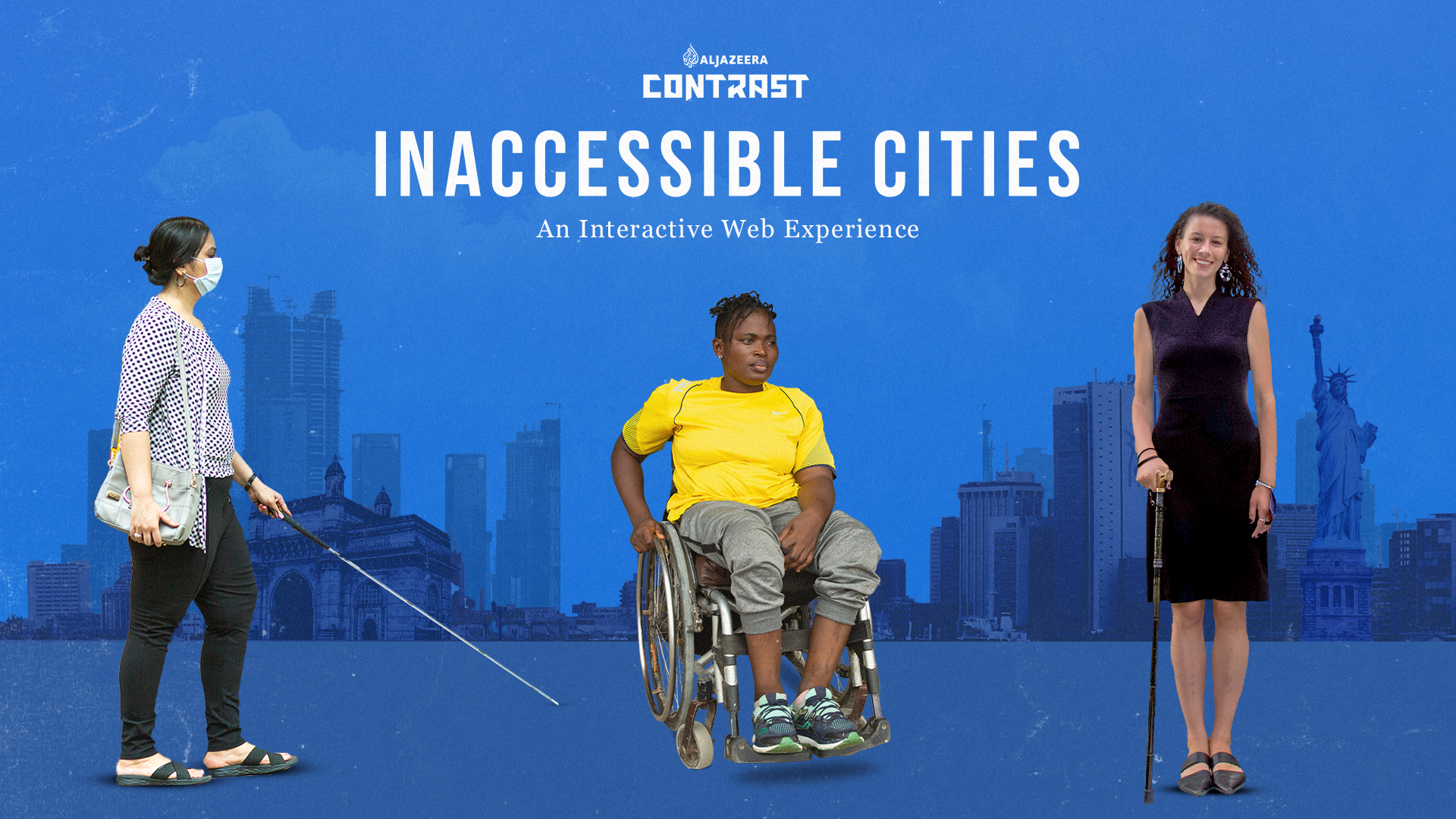 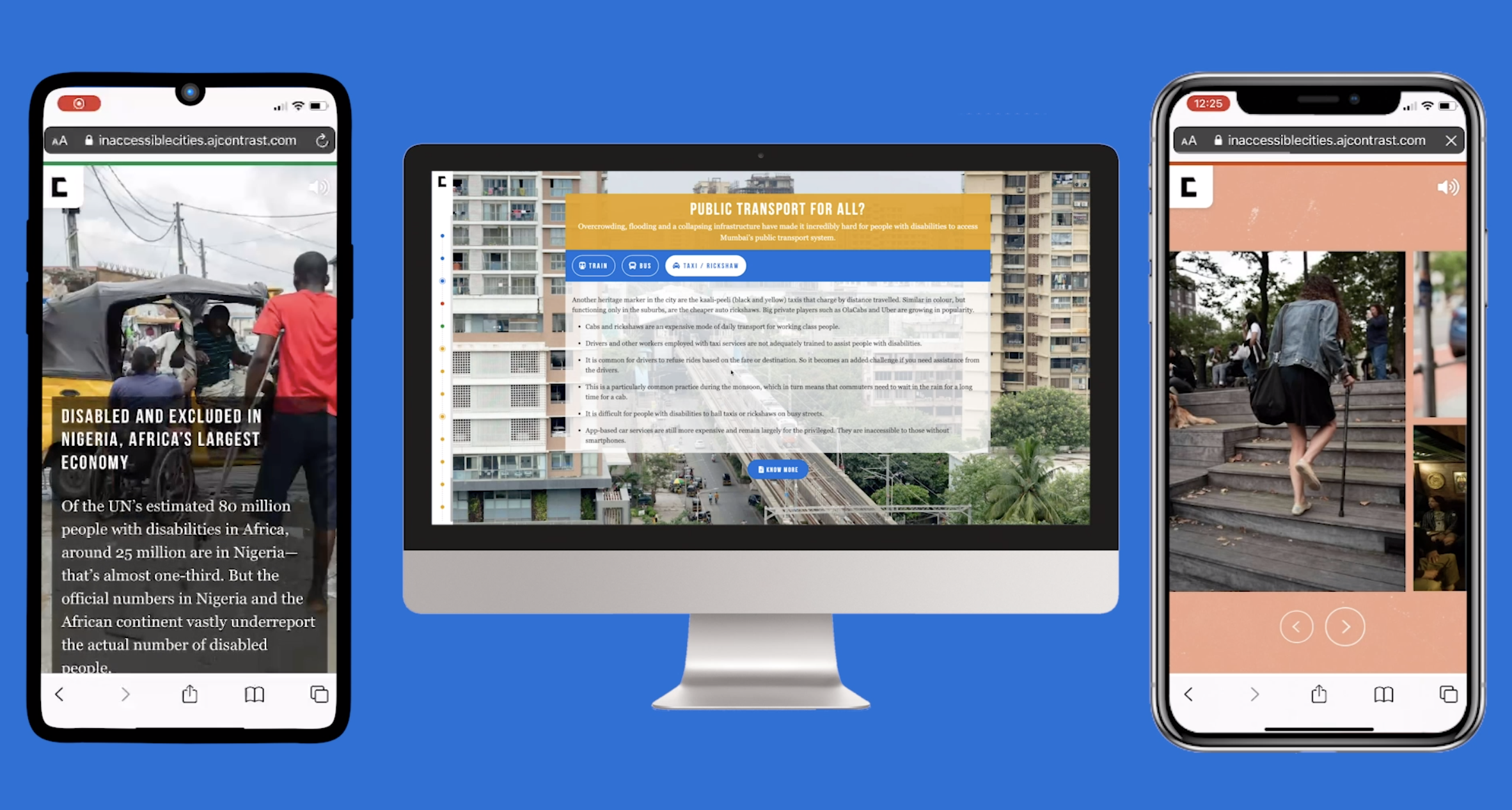