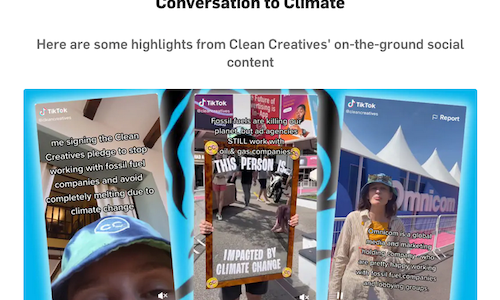 Clean Creatives is a non-profit fighting climate change by pressuring ad agencies and the industry itself to stop working on fossil fuel clients. These clients include companies like Shell, BP, Chevron, and Exxon, as well as other companies involved in the business of fossil fuels or representing their interests. With active fossil fuel producers responsible for 3/4 of global emissions since 1988, any negative impact on their advertising effectiveness will have an outsize impact on total global emissions.

The primary audience of Clean Creatives is unique: the people working in the advertising and PR industry. The Cannes Lions are the world’s most prestigious creative awards show, drawing thousands of entries every year — and, most notably for our purposes, thousands of participants, attendees, and other visitors — all from our target audience. Due to the nature of the event, these people are disproportionately likely to be very influential in advertising, from the best creatives in the world to the c-suite. i.e. the decision makers for moving agencies, holding companies, and the industry itself away from fossil fuel clients.

With this demographic conveniently concentrated in one place, our goal with this campaign was to find ways to reach them in person and on the ground in Cannes. And, with the eyes of the industry and press on the happenings at Cannes, any actions we took on the ground could be magnified many times on social and earned media, leading to broader awareness and signers of our pledge.

Clean Creatives is a small non-profit with an annual budget the size of some agencies’ travel budget for Cannes. With brands and platforms spending 6- or 7- figures for parties along the beach, we needed to find a way to stand out and snag the attention of the leaders of advertising.

Climate change affects young people most, but they are often shut out of conversations about their own future — particularly when those conversations happen on yachts on the French Riviera. So, we brought together a group of five young creative professionals in the style of a TikTok Hype House for the week at Cannes, replacing ‘Hype’ with ‘Action.’ This was a new model of activist strategy that taps into the natural creativity of our community and adapts to the way people consume news about industry events like Cannes. As far as we could tell, nothing like this had been done before.

We set them loose on the festival to make creative content highlighting the contradictions between the industry’s green pledges and their dirty work for fossil fuels. As a team, we did a wide variety of activations IRL resulting in dozens of pieces of content, each following the creator’s unique voice.

We partnered with influencers in the advertising and activist community to engage with and share our content, most notably doing an Instagram video collab with Gemma Styles that boosted our message to her nearly 9 million followers. We interrupted fossil fuel speakers and asked them challenging questions about the cognitive dissonance inherent in prioritizing money over our planet — including on live-streamed presentations. And, we playfully challenged executives and creatives as they made their way through the rose-soaked streets of Cannes. One of the most impactful ways the team came up with was impromptu and lo-fi. The team thrifted an old mirror and glued the words “This person is impacted by climate change” to it, inspiring lots of double takes and genuine conversation with our Action House squad along La Croisette.

Clean Creatives delivered the most viewed and most shared social media content of Cannes Lions 2022. One of our team’s videos hit 1 million views on TikTok before the week was out, and another garnered 20,000 engagements on Instagram.

Clean Creatives was part of a push with other allied organizations fighting climate change to disrupt Cannes. Because of our collective efforts, fossil fuels and climate change were the most discussed issue at Cannes this year — both on the ground and online — even with minimal investment of time and resources from the event organizer. This inevitably led to mentions and earned media coverage for Clean Creatives from all the major industry publications, including Adweek, AdAge, The Drum, and Campaign Live.

The week of Cannes was a big period of growth for the Clean Creatives movement with the second-highest spike in new signers of our pledge for agencies and creatives. We reached millions of people with a clear message about the choices between working with fossil fuel clients and solving climate change. What’s more, we connected directly with the most influential people in the creative industry to put this issue on their radar in a way that was unavoidable, creative, and challenging. This also helped our community of activists within agencies to start or move forward the conversation within their own individual places of work. 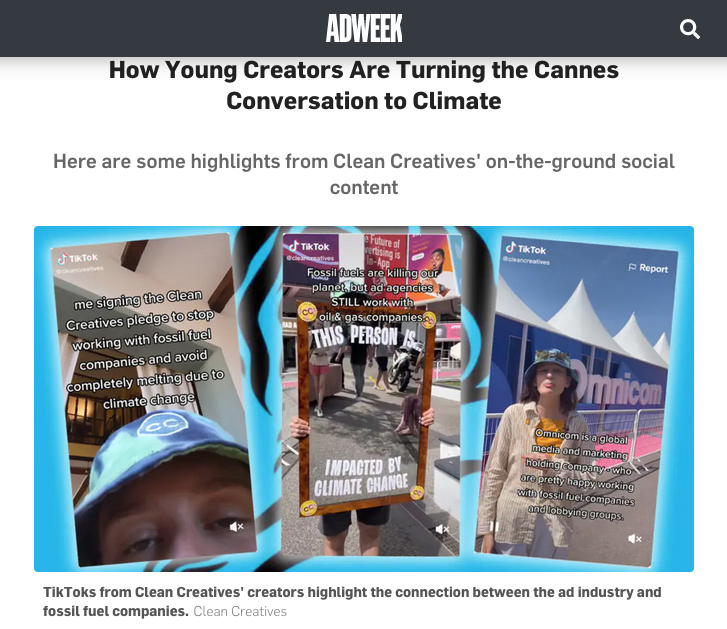