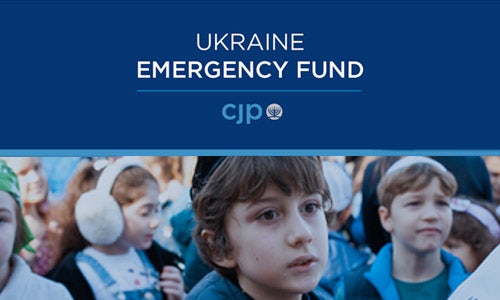 On February 24, Russia attacked Ukraine. That same day, CJP launched the Ukraine Emergency Fund, with the goals of providing humanitarian aid and spreading awareness locally. For over 30 years, Dnipro, Ukraine has been a partner city with Boston through CJP’s Dnipro Kehillah Project, and this war felt personal to many in the Greater Boston Jewish community.

Within one week, CJP’s Ukraine Emergency Fund raised more than $1 million from 1,500 donors.

Through CJP’s partners in Ukraine, along with American Jewish Joint Distribution Committee (JDC), The Jewish Agency for Israel and Jewish Federations of North America, the Ukraine Emergency Fund was able to help the most vulnerable. Assistance includes food, shelter, medicine, evacuation and refugee support.

In parallel to the on-the-ground support, CJP’s Ukraine Emergency Fund ran a local awareness campaign to keep the Greater Boston community informed beyond regular news coverage. A week after the war began, a live blog was launched to provide regular updates from our partners on the Ukraine Emergency Fund’s impact and the Dnipro community. Two community briefings were organized with access to professionals on the ground, sharing both updates from Ukraine and expert analysis providing in-depth context on the causes and consequences of the war.

Leading up to Russia’s invasion, Dnipro’s Jewish community was still dealing with the socioeconomic impact of the COVID-19 pandemic. CJP’s dedicated Israel and Global Jewry team was tracking the security situation in Ukraine and facilitating the delivery and administration of over 92,000 vaccines and medical equipment.

As the threat of invasion became more imminent, the Ukrainian economic situation worsened and CJP sent multiple emergency grants totaling $110,000 to assist with high rates of inflation, increased living and food costs and other basic needs. Because the breadth of need was so great and the crisis was dire, CJP started the Ukraine Emergency Fund to sustainably provide humanitarian support.

Dnipro is particularly vulnerable given its geographic location near the eastern border with Russia. CJP’s Ukraine Emergency Fund ran several needs assessments as the war continued to ensure funding was strategically helping as many people as possible in uncertain times.

CJP stayed in daily connection with the Dnipro community, with the exception of Shabbat, the Jewish day of rest, which prohibits work and the use of technology. Working around this religious observance created challenges for both our team in Ukraine and in Boston, facing many unknowns with 35 hours disconnected from one another each week.

Knowing how difficult it is to operate while disconnected, CJP paid for and arranged shipping of six satellite phones. After seeing other cities in Ukraine lose all connectivity due to widespread destruction, the Ukraine Emergency Fund ensured our partners on the ground were able to continue doing their essential work.

In order to raise enough money to make a significant impact, CJP’s Ukraine Emergency Fund needed to mobilize the Greater Boston community like never before. This initiative was an incredible display of community coming together in a time of indescribable need. The Ukraine Emergency Fund is CJP's largest, fastest crisis campaign in terms of dollars and donors.

The fundraising was brought to life through unique storytelling shared with the Boston Jewish community. CJP is aware of generational diversity and used a variety of tactics to share the real-life impacts the fund was making. Pictures, videos and live events were shared through social media, blog posts, email campaigns and earned media outreach. This opened opportunities to engage our community across the spectrum and give everyone an opportunity to provide support where they could.

CJP’s Jewish Teen Initiative designed and led two volunteer experiences that had over 110 teens participate in creating 756 food packages, 650 emergency kits and 357 hand-illustrated cards written in English, Russian and Ukrainian. The volunteer days were replicated by synagogues, day schools and organizations throughout the Greater Boston community in coordination with our partners at Action for Post-Soviet Jewry.

To date, $3.9 million dollars have been raised from more than 3,700 donors for CJP’s Ukraine Emergency Fund. Over 80% of donors chose to give through digital platforms such as Zoom, the fund’s website, email and social media.

The Dnipropetrovsk region has sheltered more than 300,000 internally displaced people, with the Jewish community providing housing, food and care to thousands, most of whom are not Jewish. CJP’s Ukraine Emergency Fund helped position Dnipro as a hub of caring.

Relief sent directly to the Jewish community of Dnipro addressed food security for 10,000 people; shelter for 1,000+ refugees; medical needs for 30,000 people; and evacuations for 200-500 people a day. Dnipro’s Jewish Medical Clinic is also providing 50-80 different medical procedures each day at no cost to internally displaced people.

Despite the war, Jewish life continued. Over the Passover holiday, the Dnipro Jewish community delivered 50,000+ packages of matzo to families across Ukraine.

Over 12,906 Jews have been evacuated through our partner JDC. Food, medicine and trauma support were provided to over 39,257 refugees. 617 tons of humanitarian assistance were delivered.

To meet our local objectives, The Ukraine Emergency Fund was featured 32 times in national and local media outlets, including print, digital and broadcast formats, garnering an estimated 30,316,885 earned media impressions.

In March and June, CJP hosted two community briefings that had 955 attendees. In an exit survey, 90% of people considered attending the event to be a valuable use of their time. 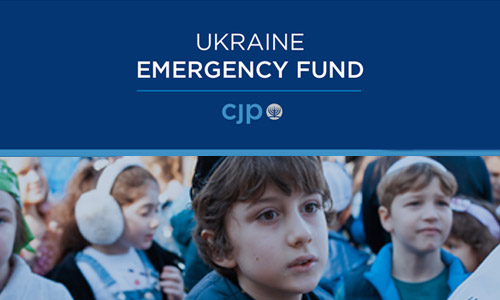