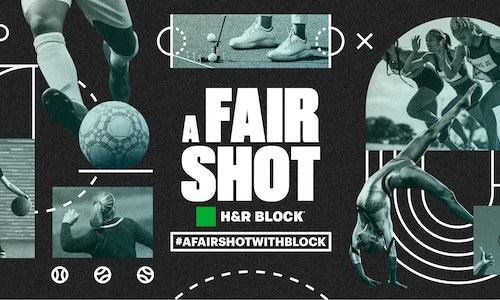 July 2021, the new NCAA name, image, likeness (NIL) rule change went into effect and turned college athletes into potential small-business owners. These revenue streams would lead to new, and complicated, taxes, and Carmichael Lynch and H&R Block took notice. Rumors swirled around seven-figure deals for QBs who hadn’t played a quarter in a college game. It quickly became clear that female college athletes were not getting the same opportunities as men — male student athletes received 67.3 percent of the total sponsorship compensation in collegiate sports as of December 2021 (via Opendorse), leaving female college athletes at only 32.7 percent. As a company with 65 years of experience getting people every dollar they deserve, H&R Block stepped in as a catalyst for change. We created the A Fair Shot program sponsoring female college athletes, kicking off a social and earned media campaign that catapulted the company into cultural-relevancy. Objectives:

The social activation centered on a thought-provoking TikTok Hashtag Challenge in which we asked everyone to “Imagine a World” where women college athletes had the same opportunities as male counterparts. Our work in earned media landed H&R Block in unprecedented sports and lifestyle media outlets.

Despite their inspiring talent, female college athletes continued to be footnotes in the grand story of the game. It showed when the NIL (name, image and likeness) rules changed last year and a large inequity of deals were going to male athletes instead of female athletes. So, H&R Block and Carmichael Lynch decided to do something about it. H&R Block committed $1 million in sponsorships, tax services and support to female college athletes, giving each a fair shot at the money they deserve and a platform to speak for equity for women in collegiate sports.

By creating H&R Block’s “A Fair Shot” program, we called attention to this imbalance of investment and made moves to provide female athletes a bigger platform to amplify their voices, more visibility and right-sized tax help to push open the doors of change. March Madness, Women’s History Month, and the 50th anniversary year of Title IX converged at tax season, giving us the perfect opportunity to launch a campaign with the potential for a tidal wave of change over a short period of time.

The purpose-driven campaign needed to reach young people – college athletes and students alike – to help drive awareness about the inequities, but also to help shift H&R Block brand perceptions among the next generation of tax filers.

We launched “A Fair Shot” on March 1, 2022, announcing sponsorships with basketball stars Caitlin Clark and Zia Cooke — leaders on and off the court. The full female roster was built out and revealed over the coming weeks, spanning a variety of sports, universities, and geographic locations. Each athlete was asked to use her voice to authentically speak to equity in college athletics and their NIL experiences. Not only were they receptive to a sponsorship, but they were also passionate about the path they were helping pave for the next generation. As the athletes announced their partnership with Block on their social platforms, it grabbed the attention of teammates, coaches and fans.

We then brought attention to the inequity by asking a few basketball-loving kids about their favorite female players. Guess what? They couldn’t name one player. And the :15s video capturing their cute, but honest, responses ran on Twitter via Twitter Amplify throughout the women’s college basketball tournament.

The conversation extended to H&R Block’s owned channels with bite-sized NIL facts via social, tax tips on H&R Block’s Tax Information Center and our athlete partners posting tax and equity-related content to their own feeds.

The program culminated in early April as college basketball championship weekend became the topic of conversation. H&R Block invited people to “Imagine a World” where women could get everything they deserve in a TikTok Hashtag Challenge (#AFairShotwithBlock), featuring Zia and shot by a female director, Kat Keene of Caviar. The Hashtag Challenge amplified the voices of our athletes (turned content creators) and prompted TikTokers to join in and show us how they vaulted through glass ceilings – both in the world of sports and in every day life.

Perhaps most importantly, H&R Block brought significant attention to each and every one of its female athlete partners, especially Zia Cooke and Caitlin Clark who launched the program and started a ripple effect for all women. Cooke, who was the center of “Imagine a World,” served as the program spokesperson in a multitude of media outlets and was on the centerstage of basketball fame when the South Carolina Gamecocks won the national championship. Heading into the final weekend, OpenDorse ranked Zia one of the top four highest paid athletes in the Final Four tournament, inclusive of male and female athletes.

For a program that aimed to bring equity to women in college sports, seeing Zia Cooke at the top of the game was a hopeful reminder that change is possible — when we give women a fair shot.