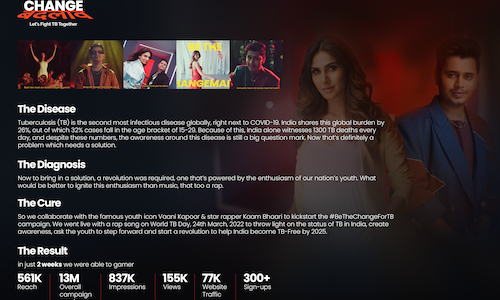 India is the TB capital of the world, contributing 26% to the global TB burden. Despite the disease being
curable and treatment available free of cost at government health care centers, millions go undiagnosed every
year. It is estimated that ~1 TB related death occurs every minute in India.
32% of the country’s TB burden is shouldered by the youth (15-29 years) of the country and are critical
drivers of transmission. They are less likely to seek care due to lack of awareness of TB symptoms, stigma
associated with the disease, delayed health seeking behavior and structural barriers in accessing complex
health systems.
Recognizing Youth as a catalyst of change, a novel, digital-first initiative, “Be the Change” for TB
was launched on the occasion of World TB day, 24th March 2022 with four key objectives:
 Increase awareness on Tuberculosis in the target audience
o By atleast 20% in a year’s time as measured through the change from baseline in TB
related keyword search volume results and pre and post survey results on awareness
 Youth sign up as ‘TB Changemakers”
o Who would serve as the focal points in disease awareness dissemination
 Youth Engagement
o Engagement of youth on digital channels (website &amp; social media) measured
through social media impressions, video views, shares, likes etc.

 Improvement in health seeking behavior
o As measured through the number of clicks through and downloads of Arogya Saathi
app (TB citizen app), number of people calling on the national TB helpline number and
increase in trend of health seeking related search keywords

“Be the Change” for TB is a digital first, precision marketing-based initiative backed with insights from
primary &amp; secondary research and data analytics targeting youth (18-29 years) in 8 geographies of the country.
The digital deployment of the campaign enabled to understand the audience, their personas , motivators, and
barriers. Digital signals further enabled right targeting and deployment of programmatic messaging
Leveraging existing audience cohorts of in-market &amp; affinity audiences by enabling technologies like Google’s
marketing platforms like Display, Google Search ads and FB &amp; IG platforms helped reach out to targeted youth.
Our creative strategy aimed to inspire youth and speak to them in their language. We used music as a medium
of expression to trigger and normalize conversation on TB. In collaboration with youth influencers- Vaani
Kapoor, well known Bollywood celebrity and Kaam Bhari, a young rap artist , the initiative was launched with an
engaging rap song all digital platforms. Besides influencer led content , we partnered with youth centric
platforms like Terribly Tiny tales, Logical Indian and Humans of Bombay to reach the audience with different
forms of engaging content while continuing interest through informative social media content .
Further , the campaign was supported through organic media coverage and building thought advocacy on the
focus required on youth to make TB free India in collaboration with key stakeholders and multilateral
organizations including National TB Program, under Ministry of Health , India.
Programmatic media targeting was deployed using Google Marketing platforms- Display, Search and
FB/IG/YT ads to reach the right audience while creating Moments that Matter !
Quirky content formats, youth-centric channels, collaborative features on social media were leveraged to create
informative, engaging content on TB awareness and health-seeking behavior.
The online activations on IG channels like #Team up for TB (hookstep video) or sharing survivor stories of grit
encouraged youth to engage and start an open conversation about TB. The campaign reached to ~7.6
million accounts through its social media handles.
Given the complex topic such as Tuberculosis, which is shadowed by stigma, it was a challenging ask to pen
down the creative and deployment strategy that not just resonates with youth but engages them and enables
youth to take action. The multiple dimensions involved with this topic had to be handles with sensitivity and
utmost create to touch the right chord of the target audience. Given this was the EVER FIRST digital and
precision marketing led initiative towards solving a public health issue like Tuberculosis , there was no playbook
to reference.
With strong insights, research and partnerships, we will were able to build the blocks of this puzzle and with a
strong purpose and plan in hand, “Be the Change” for TB was launched on World TB Day this year 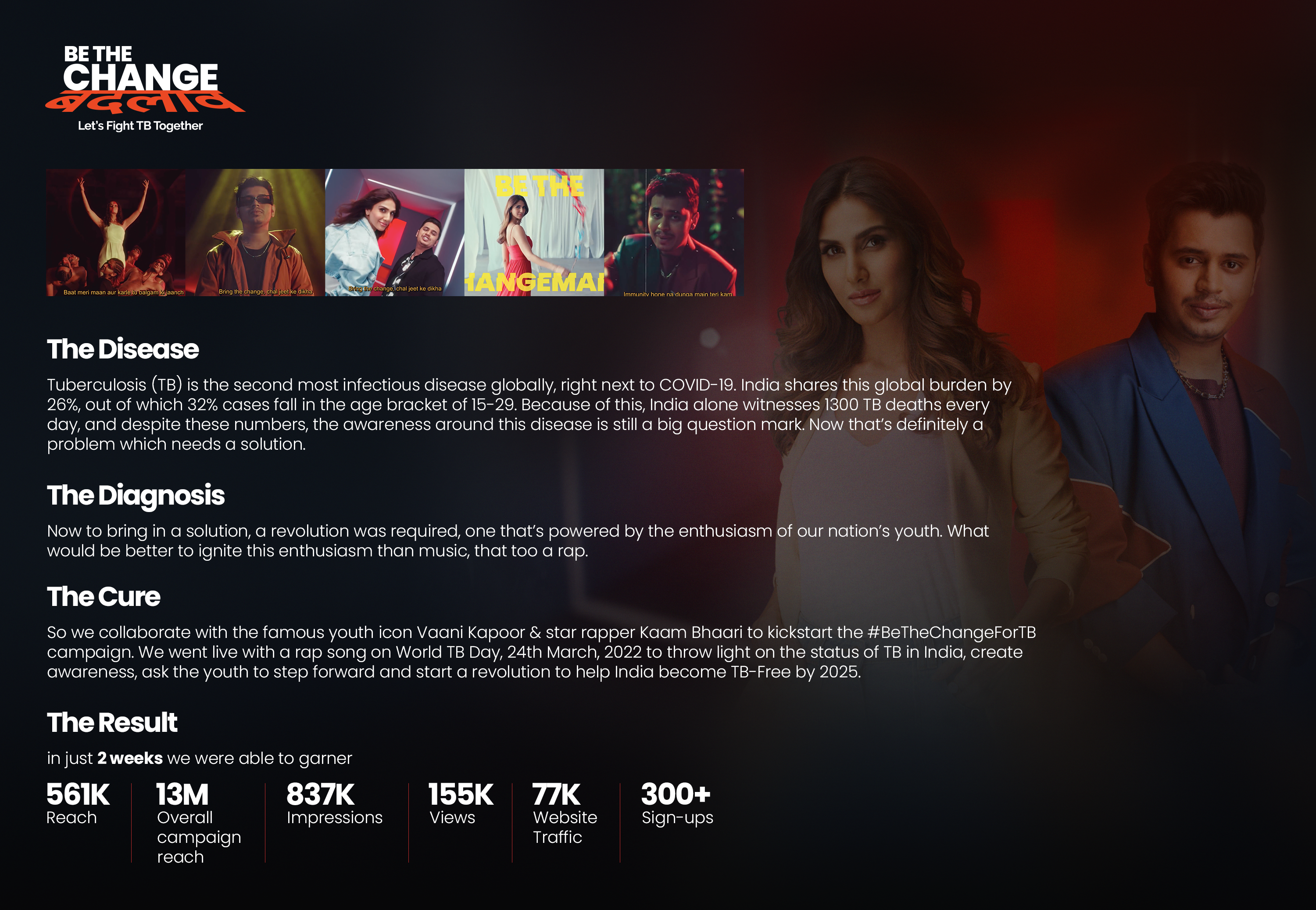