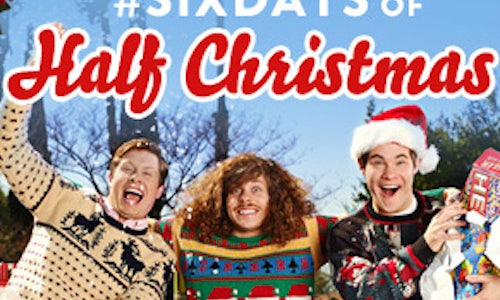 Workaholics #SIXDAYS of Half Christmas

Come June 25, every Workaholics fan is celebrating Half Christmas, the official slacker holiday for ditching work, brewing keggnog and barbecuing up on your rooftop. This year, Comedy Central upped the stakes with the #SixDays of Half Christmas contest and got the show's fans vying for the most coveted of all Workaholics items, Blake's bear coat.In 2011, Comedy Central created a national holiday by harnessing the sheer social momentum around a TV show. A fan tweet from @sta_griff said it best: "We can't be friends if you don't know what #halfxmas is." Invented by the show's characters in the Season 1 episode called "The Strike," the Half Christmas holiday has become a yearly ritual for fans, with celebrations on social media each year getting bigger than the previous one. This year, Comedy Central introduced a new feature into the festivities -- a contest that asked fans to compete in daily challenges over the #SixDays of Half Christmas. Each day had a specific task for fans to do and daily prizes were awarded to the best entry, one for each task. One lucky winner got a replica of a much coveted fan favorite prop, Blake's bear coat. The contest itself lived on the Comedy Central Facebook page and entries were aggregated using the #SixDays hashtag to also include submissions from Twitter and Instagram. The six challenges were as follows: June 20 - Decorate someone's cubicle/office June 21 - Find a Santa look-a-like and sit on his lap June 22 - Trim a tree. Any tree. June 23 - Create your own North Pole June 24 - Text your friend "All I want for Half Christmas is ____" and post your conversation June 25 - Share your Half Christmas party pics The offical Workaholics tumblr served as the promotional arm of the contest, reaching the most dedicated of Workaholics fans with daily updates and exclusive content to help fans in their celebrations. These included Half Christmas cards and ringtones, original recipes and an exclusive video featuring Alice, the boss on Workaholics, unleashing a diatribe as the grinch of Half Christmas: Not to let Alice spoil the fun, Comedy Central created the Workaholics Half Christmas Yule Log, a fitting backdrop to any Half Christmas celebration: 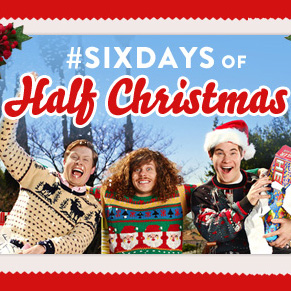