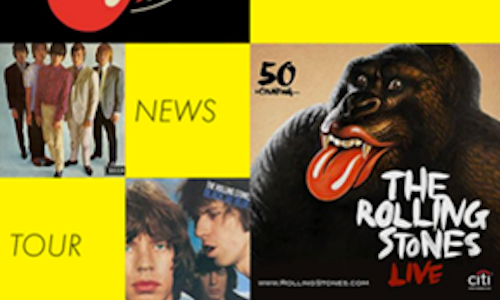 As part of their partnership with The Rolling Stones 50 and Counting Tour, Citi sponsored The Rolling Stones official mobile app. The sponsorship encouraged fan interaction throughout the tour while promoting the Citi brand to hundreds of thousands of Rolling Stones fans and potential Citi cardmembers. Through the partnership, Citi provided fans with exclusive content and an opportunity to influence the set list at shows through a By Request voting application. The app created a global extension for Citi’s official sponsorship of the tour and allowed fans anywhere in the world to connect with each other and with the band. The Citi logo was prominently featured on the app home screen and clicked through to citiprivatepass.com. Fans could also preview tracks for free, listen to and buy any song from The Rolling Stones catalogue on iTunes, buy exclusive merchandise, view photos and exclusive videos, engage via social media, check out tour dates and check-in from a Rolling Stones show to tell the world “I was there!" Additionally, Citi’s sponsorship of the app extended the life of the partnership beyond the tour as their integration is still live. A custom microsite gallery was created (rsphotobooth.com) to host pictures taken at photo booth installations located in the venue concourses. The custom photo booths were designed to look like The Rolling Stones’ dressing rooms from their much-publicized 1972 American Tour. Fans were encouraged to take pictures and post them to Instagram with the Citi created hashtag, #StonesVIP. Pictures tagged with #StonesVIP were uploaded to the gallery, which was integrated into the app. Fans could then go into the app and share their photos directly via social media. Citi also had branded banners placed throughout the concourse of each venue that included a QR code to download the official mobile app. Citi brought the ultimate participation module to fans by giving them direct influence over the show through a program called By Request. Fans were able to vote from a selection of songs not included in the original set list. The Rolling Stones played the song that received the most votes live during their show that night. The voting module inside the app encouraged fans to vote up until the last minute and Citi brand messaging was included on the LED wall behind the stage during the show when the song was selected and announced. Citi was the presenting sponsor of By Request at the shows in Las Vegas, San Jose, Washington, D.C. and both shows in Philadelphia. Fans were able to share their vote via Facebook and Twitter which expanded the reach of the campaign. Billboard was Citi’s official media partner for the tour and promoted the app on Billboard.com with digital banners and via their social media channels. At the conclusion of the tour in July 2013, The Rolling Stones official app had over 15 million page views. The app recorded half a million page views on the date of the tour announcement on April 3, 2013. It had a substantial jump in downloads and activity following social media promotion, exclusive content and major announcements (80% increase). Users were highly active once they downloaded the app – averaging over 44 page views per user. The app had 54,000 video views in the five days between April 27 and May 3, 2013. During the tour's eight week run, over 2 million songs had been listened to in the app. New content continues to be uploaded, including never before scene footage and exclusive interviews of The Rolling Stones. 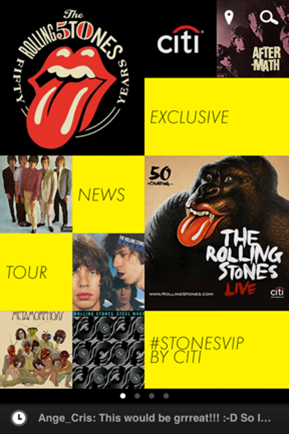