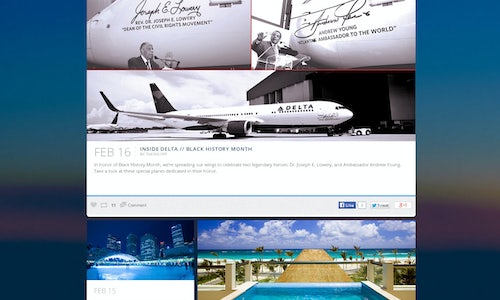 Delta’s previous blog, “Under the Wing," was built on WordPress and focused mostly on corporate news and announcements. From interactions on our other social media channels, we realized that media, customers, investors and travel enthusiasts had an increasing appetite for rich, engaging, long-form content beyond what was coming from press releases, and the old blog wasn’t meeting this need. Delta’s Facebook and Twitter pages built strong communities and a reputation for witty, funny and engaging posts, but the blog was lacking both in terms of design and content. In May 2013, Delta sought to change that. We relaunched the blog with the new name “Taking Off" on the Tumblr platform. The primary objective of the new blog is to contribute to Delta’s goal of being the most socially engaging travel brand, facilitating human connections and creating brilliant, shareable content. The blog is intended to act as a social hub, directing both its new and loyal audiences to Delta’s various digital channels and social platforms. We chose Tumblr as our new blogging platform because the Tumblr community is built for sharing and engaging and is inherently social. Tumblr was also a supportive partner in helping establish the direction and editorial vision of the new Delta blog. We were careful to create an experience that non-Tumblr users would love while still engaging the existing Tumblr travel community. This balancing act has been one of the biggest wins for the “Taking Off" blog. • Content drives the blog – Delta delivers value to blog visitors through eight primary content categories: destination inspiration, travel tips & tech, Delta Dish, entertainment, flight, thought leadership, inside Delta and Delta news & updates. • Regular cadence – The blog is updated one or two times per day with engaging content. Readers can count on the “Taking Off" blog to have fresh content on a daily basis, and this keeps them returning for more. • Optimized for search – “Taking Off" has a robust SEO strategy, including keyword diversification, trend analysis and event-related content. • Community management – To truly have a two-way conversation, Delta has to respond to comments and contributors in meaningful ways. The “Taking Off" blog has a dedicated community manager to monitor, moderate and respond to comments. This person is an active participant in the community and funnels relevant input to other parts of the business for evaluation and action. Delta has long been a leader in social media. We have a unique personality across our social channels and deliver real value through programs such as @DeltaAssist, the first U.S. airline program that offered dedicated customer service through Twitter. Delta uses Facebook and Twitter for sharing short-form, fun content and has amassed a loyal following in those platforms. However, these channels lacked a content hub for travel enthusiasts to gain in-depth information and behind-the-scenes insight into Delta’s breadth of resources and content. Delta knew that to be the most socially engaging travel brand, it had to fill this gap. The “Taking Off" blog launched in May 2013. So far, more than 300 posts have been published. The content is the result of collaboration between marketing, corporate communications, Sky magazine, the corporate archivist, Delta Vacations and employees throughout the company. Every piece of content is designed to appeal to two unique audiences. First, Delta directs traffic to the blog from other social channels and even from our primary website, delta.com. Therefore, the blog content must be enticing to Delta’s core customers. Second, because the blog is hosted on the Tumblr platform, it must also appeal to Tumblr readers who have a passion for travel, aviation and many other interests. The blog balances the needs of these two audiences by focusing on lifestyle content. The blog content is also supported with paid advertising on Tumblr. Delta works directly with Tumblr and is a beta user of many of Tumblr’s most innovative advertising platforms. In December, Delta was a launch user of the new “promoted trending posts" advertising unit on Tumblr and in January was one of the first brands to use Tumblr's CPE sponsorship model. Strategy Our strategy for reinventing the blog was to focus on becoming a social hub for travel lifestyle content and to dedicate “Taking Off" to genuine two-way conversations. Our strategy has three major components: 1. Build credibility – Delta sought to be a credible source of lifestyle content, served up in a unique way that provides value to the community, including a consistent editorial approach to content. 2. Source content from strategic partners – The blog team knew that Delta’s various divisions would be rich sources of content. The team reached out to and partnered with Delta’s Sky magazine for destination content, the historical archivist for Throwback Thursday content, the news team for Delta announcements, and customers for rich experiences from their travels. 3. Encourage conversation through design – The blog was designed to invite conversation, not just to store content. Delta worked with a design agency to create an enticing custom visual layout for the Tumblr blog. The team added commenting capabilities (which aren’t native to Tumblr) and created a “contribute" button to encourage visitors to share content, especially images and experiences from their travels. Evaluation of Success • Views: More than 5 million views since “Taking Off" launched (combination of open web platform and Tumblr audience) • Revenue Generation: Using appropriate tracking on links to delta.com, it has been determined through last-click attribution that the blog has generated enough revenue to cover all development costs • Average Note Count: The blog has achieved a 5,454% increase in the number of average notes received per month since its launch • Trending Blog: Tumblr’s trending blog feature has included “Taking Off" in both paid and organic trending blogs 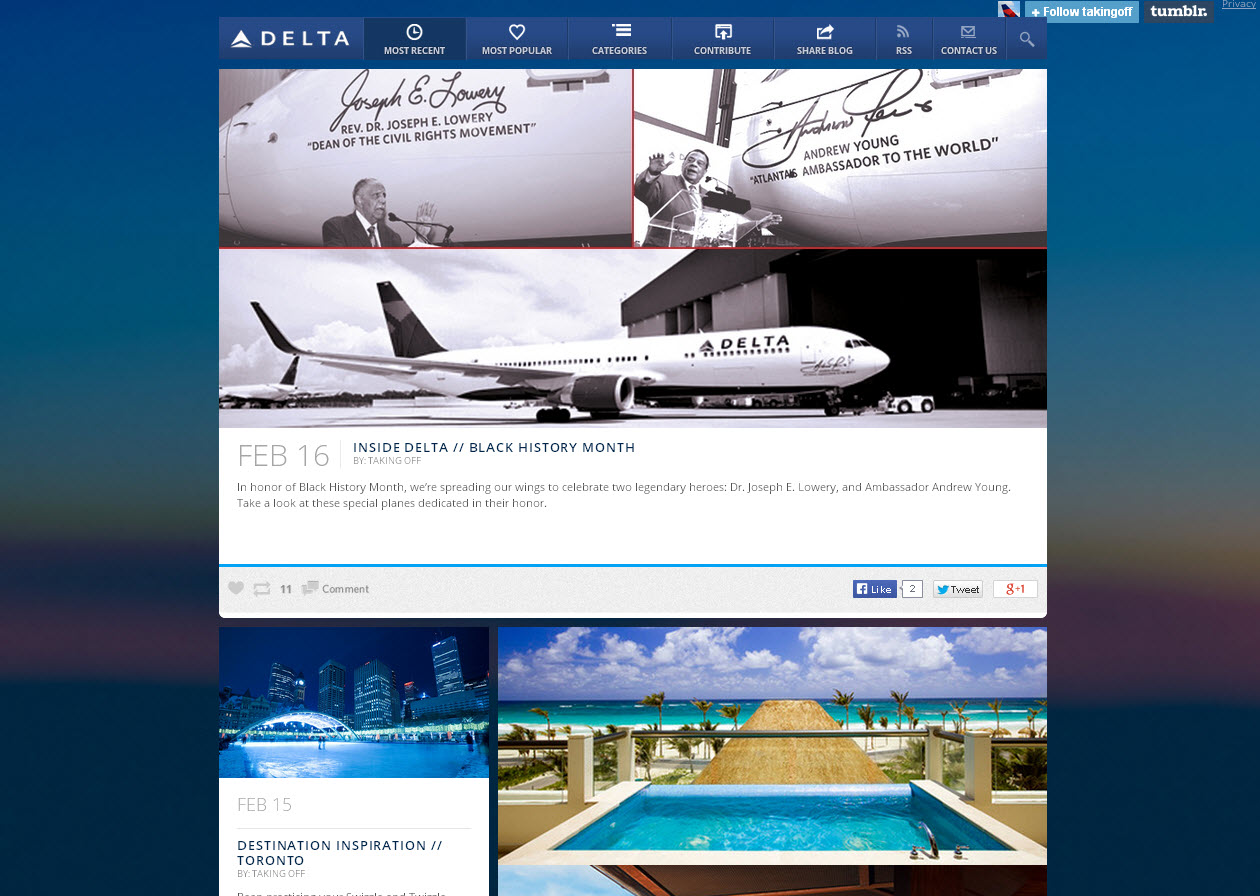