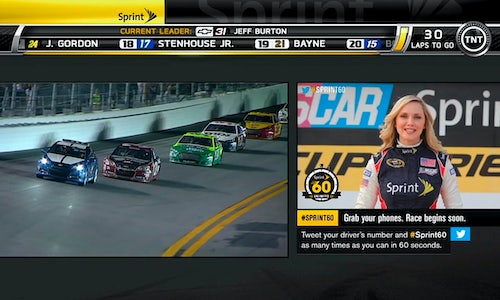 In a world first, never.no and Leo Burnett enabled realtime Twitter integration into Social TV Advertising. Sprint in conjunction with Leo Burnett used never.no’s Social TV advertising platform, Sync, during TNT’s Wide Open coverage of NASCAR’s Coke Zero 400 in Daytona, Florida to power the world’s first real time Twitter-race during a sponsored segment. The 60-second race, billed as “the shortest race in NASCAR history", ran during the live Wide Open coverage of the last 30 laps of the race. Fans were asked to Tweet their favorite driver’s car number, along with the hashtag #Sprint60. Each Tweet increased the driver’s speed, pushing them faster along the track as viewers watched the progress live. To promote the program, Sprint aired 15-second teasers during TNT’s pre-race coverage, encouraging fans to find out more details about the ‘race’. A second promotional spot providing more information aired during the first half of the NASCAR Sprint Cup Series race. Within the final 30 laps, another 30-second spot featuring Miss Sprint Cup Kim Coon was shown, signaling the start of the Sprint 60 Unlimited. Fans were encouraged to Tweet their favorite driver’s car number along with the #Sprint60 hashtag as often as they could for during a 60 second-span. never.no’s Social TV advertising platform was used to harvest the incoming #Sprint60 hashtags and calculate the speed for each driver. The real time velocity data was fed directly into a Chyron graphics engine and powered the on-screen race for the duration of the voting. The top five drivers at any time, voted by fans in real time, appeared on TV. Icons of the top five appeared on a virtual race track and their position in the race was based on the continuously incoming votes. Dale Earnhardt Jr. won the Sprint 60 Unlimited race, receiving a trophy and $10,000 donation to his charity of choice. This was the first time that viewers could use Twitter to directly interact with a sponsored TV spot in realtime, influencing the content on air. The race was determined LIVE on TV with real votes and a live response from the winner. The initiative was a direct call to action for the audience to not just participate in a Social TV game during an ad spot, but it also created a social sharing benefit in realtime. The Sprint60 case study is a prime example of 1st/2nd screen synchronicity, real-time broadcast graphics rendering, and individual viewer dialogue. It was a bold segment to put on air, since there was no margin for error. We believe this is the start of revolutionizing how sponsors relate to broadcast. 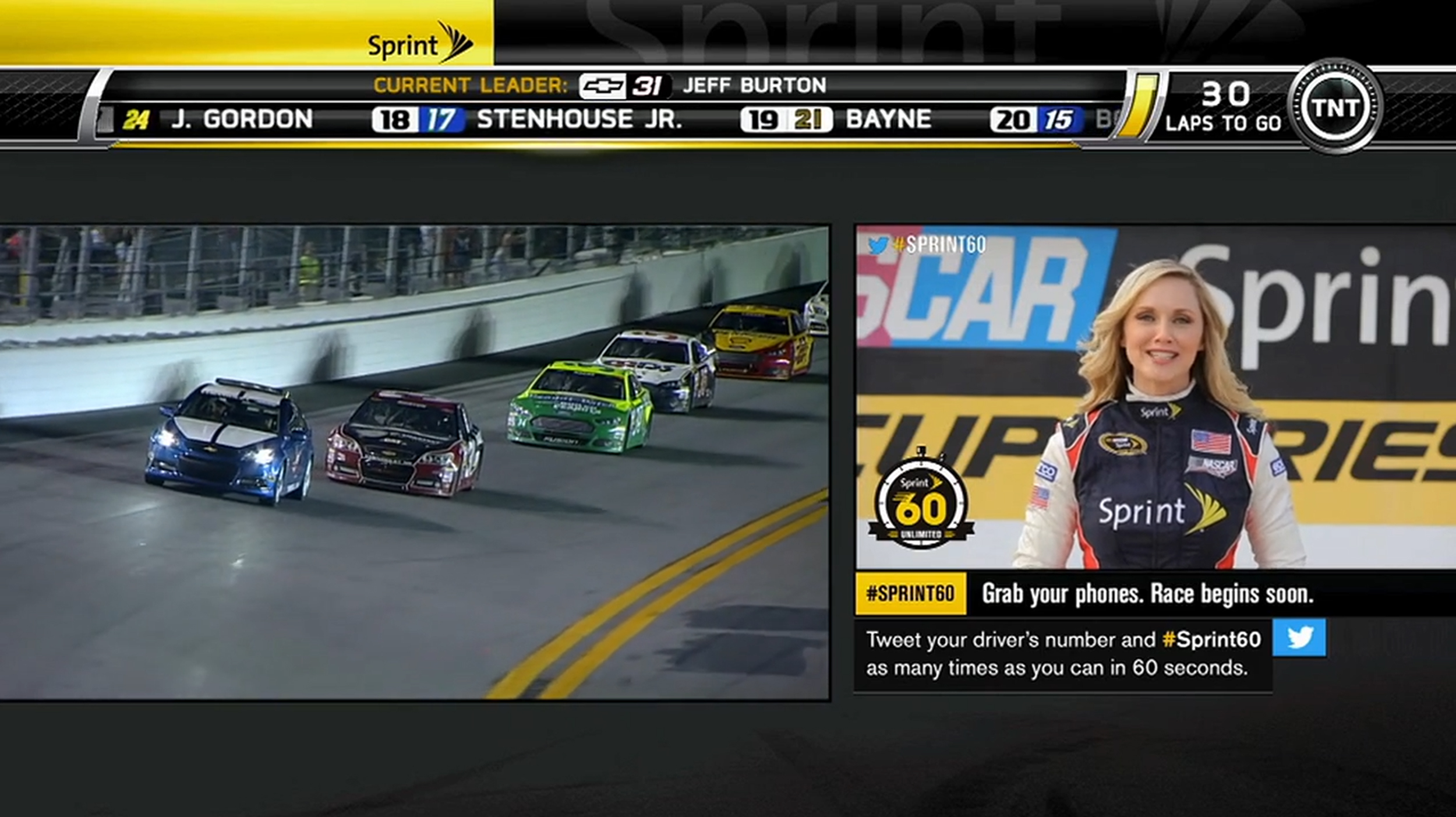