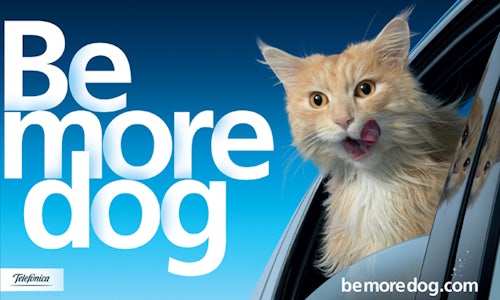 Cats and dogs are very different animals. Cats are aloof, lazy and coldly indifferent to the world. Dogs, on the other hand, love everything. Slippers? Amazing. Socks? Amazing. Everything… amazing. And dogs are right. Life is better when you dive right in. So in this campaign, we encouraged the nation to lose their cat-like indifference and get involved. To do more, try more, explore more… in short, to be more dog. For a deeper explanation of “Be more dog", see this explanatory video: http://bit.ly/NCk4Hg.) The key objectives of the campaign were to change consumer perception of O2 by landing a new positioning and drive uptake of new products and services. Our launch advert featured a cat that longed to be more dog. The video clocked up over 3 million views on Youtube; it was the most shared advert in the UK, and fourth most shared in the world that month [source: Unruly]. It was remixed 19 times and 38 parody videos were uploaded. But the TV spot was just the start. Our mission was to open up the possibility of technology to everyone, and to get everyone more active and involved. With this in mind, our campaign offered plenty of ways to do so (both on and offline). In order to get the people of Great Britain to be more adventurous we tried more than one approach. We created a website (Bemoredog.com) that let you throw virtual Frisbees from your smartphone to your PC for our cat to catch. The dual screen technology served a dual purpose; to spread our message, and give everyone a fun way to try cutting-edge technology first-hand. We also encouraged people to spread the word. Our website enabled users to share “dog bombs" with their friends across Twitter and Facebook - personalised video messages encouraging their cat-like friends to be more dog. On top of all of this we created a “Be more dog social kennel hub", where every day we tracked down people on the internet who were being too “cat" and brainstormed ideas for how we could help them to become more “dog". We sent people white water rafting, surfing, skydiving and even diving with sharks. We used high reach influencers to spread the word. We sent a range of lifestyle bloggers two mystery boxes, one labeled “dog box" and one labeled “cat box". They had to choose which of the boxes they wanted to open and request the unique code to open one of the boxes on Twitter from @O2. Cat boxes contained items for a lazy night in, whereas dog boxes contained invites to a range of adventurous experiences for the bloggers to share with their followers and spread the Be more dog attitude. To keep our content and activities fresh we took inspiration from current events and changes in the weather. For example, on the hottest day of 2013, we gave out on 15,000 Be More Dog branded frisbees in parks across the UK. A call to action on the frisbees encouraged users to share pictures of themselves out enjoying the weather with the frisbees on Twitter or Instagram. If they shared, they were in with the chance to win awesome once in a lifetime experiences. One particularly dog-like Twitter user even took one of our Be More Dog frisbees to the Bolivian salt flats and sent us a picture! Each day across the campaign we identified relevant viral videos of people displaying “catlike" behaviour on YouTube and made bespoke “Be more dog" pre-rolls for each video. For example, when a YouTube video of Katie Hopkins appearing on ITV’s This Morning went viral we made a bespoke pre-roll addressing Katie Hopkins encouraging her to “Be more dog". Any user watching the video would see our pre-roll first, calling out Katie’s catty behaviour. The use of bespoke pre-rolls was truly innovative, as it was the first time Google had collaborated with a brand to deliver bespoke pre-rolls against viral content. Across all activities we utilized the same hashtag (#Bemoredog) to collect all the conversation together and allowing O2 to respond where appropriate. The hashtag was even used across outdoor media to allow consumers to find out more about the campaign. O2’s Social Media Response Team (SMRT) were on hand to reply to any questions and explain the concept of “Being more dog" across Twitter, Instagram, Facebook and YouTube. But we didn’t just use mainstream channels such as YouTube, Facebook, Twitter and Instagram; our activities utilized newer platforms such as Vine and Snapchat in innovative ways. One week we held a Vine film festival, inviting users to remake their favourite films using Vine. Another week we used Snapchat to play a guessing game with our followers. In two weeks over 300 pieces of original real-time content and experiences were delivered to unsuspecting web users, all with one simple mission: to challenge internet cattishness, and nudge everyone online to be more dog. The campaign inspired over 50,000 online conversations, and had over 1 million visits to its campaign pages online including Bemoredog.com. Sentiment of conversation reached a record positive peak of +36% (average sentiment for O2 is usually +20%). Most importantly, we have proof that the campaign worked against the key objective of changing consumer perception of O2. A commissioned piece of Nielsen research found that those who were exposed to the campaign on Twitter were more likely to report that they would choose O2 the next time they switched mobile phone networks compared to those that were not exposed to the campaign. We wanted everyone in the country to be less ‘meh’ and more engaged with O2; and with this campaign, they were. 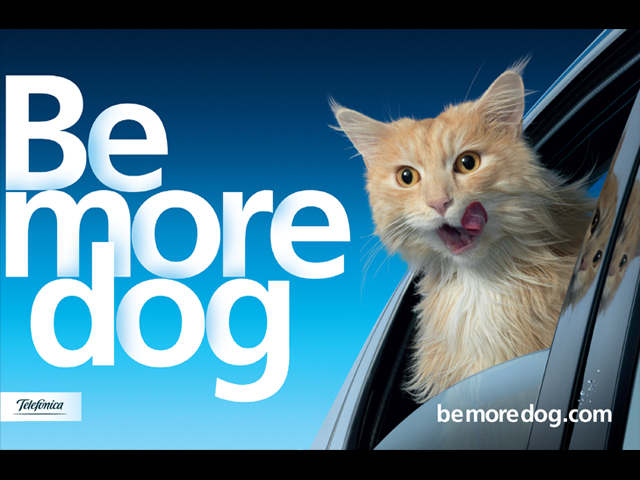