Viacom Music partnered with Huge to create and launch a TV everywhere and second-screen co-viewing app for MTV, available for free on iPhone and iPad. MTV challenged Huge to determine how to best offer up its extensive content on mobile and tablet in a design worthy of its iconic youth culture brand. The app had to be much more than a TV everywhere platform. Practically, MTV couldn’t guarantee every user the full catalogue of current and classic shows because of varying contracts with cable companies, and at a higher level, the network knew that content wasn’t the only draw. MTV is more than just a television channel, it's a piece of teenage culture, and Huge had to figure out how to create a mobile app that would reflect the brand as a whole. Huge developed the user experience, design, and front-end and back-end technology of the app, and also incorporated social media.Huge successfully created an original app that fully encapsulates the MTV brand. Because MTV is as much a shared experience among teenagers as it is a channel, Huge designed the app to be interactive and highly social. We opted for a simple navigation with only three main sections—Home, Videos and TV Schedule—to allow for an immersive experience without distractions. The Home page promotes new and varied content, and by scrolling horizontally users can keep discovering content, from full episodes to special extras exclusive to the app. In the Videos section users find today’s hit shows alongside retro favorites such as Beavis and Butt-head, Daria and Laguna Beach. Cast interviews and webisodes are also available to extend the narrative of the shows beyond what can be seen on TV, and thanks to MTV Other, the network’s new content lab, there are even online-only videos series. Huge sought to integrate social media in a convenient, intuitive way. Rather than create an MTV-only chat system, we connected the app to Facebook and allowed users to see which of their Facebook friends were logged in at the same time and then message them through Facebook messenger. Recognizing that teenagers don’t use Twitter so much for communicating with each other as they do for connecting with celebrities, we enabled tweeting directly from the second-screen experience as well. The app also offers an experience called “Connect" that filters the best Tweets from Twitter and allows fans to discuss their favorite shows, characters and highly anticipated yearly events, like the MTV Video Music Awards, in real time with other fans or with the show’s cast. New functionality provides a contextualized overlay to the live viewing experience, including sharing behind-the-scenes stories and facts about the shows, characters and yearly events, including synced content polls, quizzes, factoids, videos, photos and audio. The MTV app launched to rave reviews, giving the network’s loyal teenage following a brand new way to experience their favorite channel on the devices they use most. 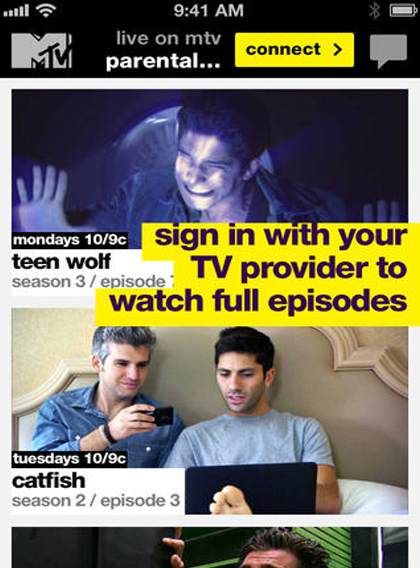