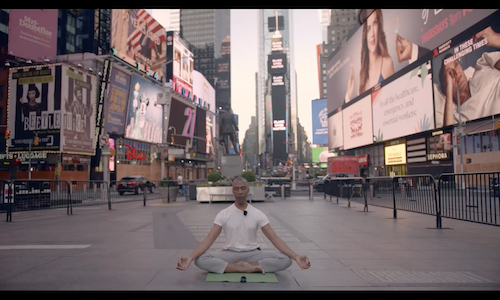 Solstice in Times Square is our annual yoga festival where thousands of yogis come to participate in free yoga classes, with the unique challenge of finding calm within the chaos of Times Square. Unable to physically gather this year, our goal was to bring Times Square into the homes of an international audience and to provide an accessible, free yoga class for everyone.

This spring has been a time of constant change and emotional upheaval, from our fears and grief at the global pandemic, to our pain and anger at days, weeks, and centuries of injustice and racism. With these actions and reactions pulling us in all directions, it becomes even more important to channel our energy and frustrations in order to crystallize our own responses and needs, finding what we can contribute to the world.

Therefore, we decided to pivot into the virtual space, not only to continue the tradition of our annual event, but also to use our platform to raise awareness, respond to the current social climate, and demonstrate how the practice of yoga can help individuals determine where and when they need to make change within their own lives. As Solstice in Times Square Co-Founder Douglass Stewart said, “Yoga highlights the personal, social, and universal journey, perhaps as one of many factors in our recognition that Black Lives Matter. We as a nation are awakening out of our own racial torpor, rising out of our dullness to racial injustice. We have been compelled to move.”

We chose to film the class in Times Square, in a safe, socially-distanced, multi-camera production that captured the organic ambiance in the present moment, bringing Times Square to the world. To make the livestream conveniently available for global participation, the class was broadcast on our website TSQ.org, Facebook Live, and YouTube at 8am, 12pm, and 4pm on June 20. The class features Douglass Stewart, Event Co-Founder and instructor at our event since its inception.

The video draws on Times Square's status as a gathering place for significant events and as a visual symbol of the times. In the past few months, news outlets have shown a near-empty Times Square to illustrate the COVID-19 shutdown, and images of Black Lives Matter protesters on the Broadway Plazas during some of New York's protests against systemic racism and police brutality.

We framed this context beginning with a montage of this endless news-cycled imagery, and then countered it with footage of Douglass doing various yoga poses as he narrates how the practice of yoga can be used as a lens to view the world. The B-roll footage highlights unique elements of our district, including the profoundly relevant messages on the iconic billboards of Times Square, in contrast with prior years. Douglass leads viewers through an hour-long class while situated on one of the Broadway Plazas, and ends with a documentary-style interview offering his personal reflections as a Black man teaching this class in today’s society.

We partnered with two different charities: the World Health Organization (WHO) and Black emotional and mental health collective, BEAM. We posted a video from each organization in between our livestreams, to amplify their messaging and direct our audience to donate to their causes. We specifically promoted the COVID-19 Solidarity Response Fund for WHO, which goes to WHO's work with partners to track and understand the spread of the virus; to ensure patients get the care they need and frontline workers get essential supplies and information; and to accelerate research and development of a vaccine and treatments for everyone. For BEAM, we sat down with Yolo Akili, Founder & Executive Director, to talk about the collective's work on the healing, wellness, and liberation of Black and marginalized communities, and the experience of moving programs online during the pandemic. We also posted a video from the Consulate of India, continuing our longstanding partnership with them and the International Day of Yoga, which was initiated with a ceremony at our 2015 event.

In the spirit of bringing the world together and sharing the benefits of yoga, we launched a social media campaign to further promote the event, asking yogis which asana or posture has been most meaningful or helpful in getting through these challenging times. We asked the same of previous Solstice instructors, influencers, and yogis from around the world, and compiled a video of their responses to set the example.

Our event garnered 3.8 million impressions and over 52,800 engagements from around the world across our Facebook, Instagram, and Twitter accounts. The class itself had over 69,000 combined views across our Facebook Live and YouTube channels. We looked towards the unifying power of Times Square and the reflective energy of yoga to reach as many people as possible in the safest manner. We feel that we achieved that goal and much of the event's success can be felt in the testimonials we received.

“I just want to thank the Alliance, Douglass Stewart, and Mr. Tompkins, as well as the people behind the scenes for making it happen. The Alliance does such an awesome job promoting NYC and the Arts but this one is close to my heart...this is the first one I was unable to attend in 12 years and because of your efforts I didn't miss it. These events are so important at a time like this, yoga is never contactless, hearts and spirit touch no matter the distance.” ––Kim (via email)

“Just hearing the soundtrack of Times Square was so powerful! Thank you @TimesSquareNYC and Douglass Stewart for the perfect way to start the day... and especially appreciated Douglass’ inspiring words throughout practice.” ––@RachelChang

“Happy solstice - thank you @douglass.stewart.73 for your wisdom, authenticity, and for leading us in our practice during this time of opportunity and change...#solsticetsq @timessquarenyc” ––@yichinglin 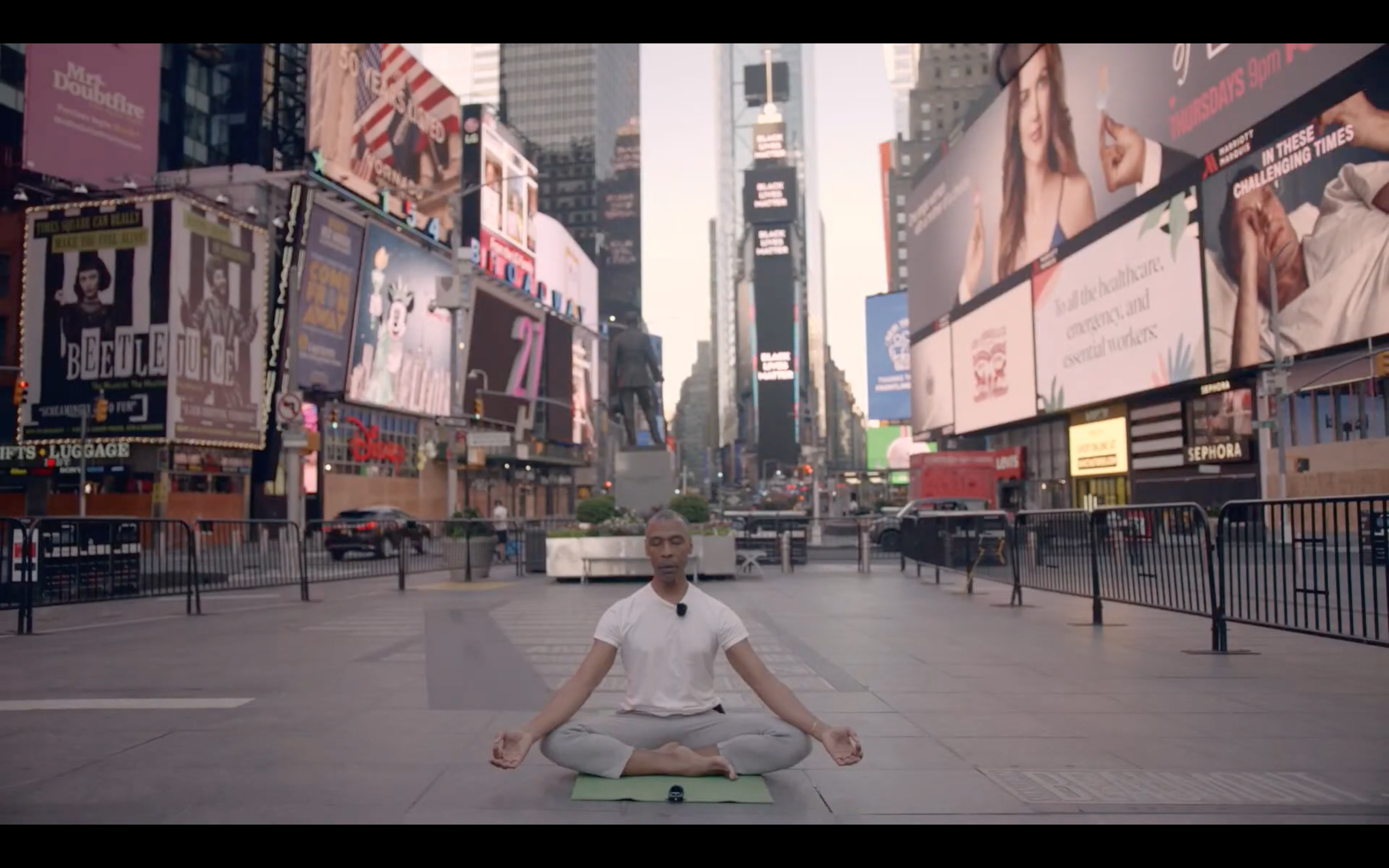 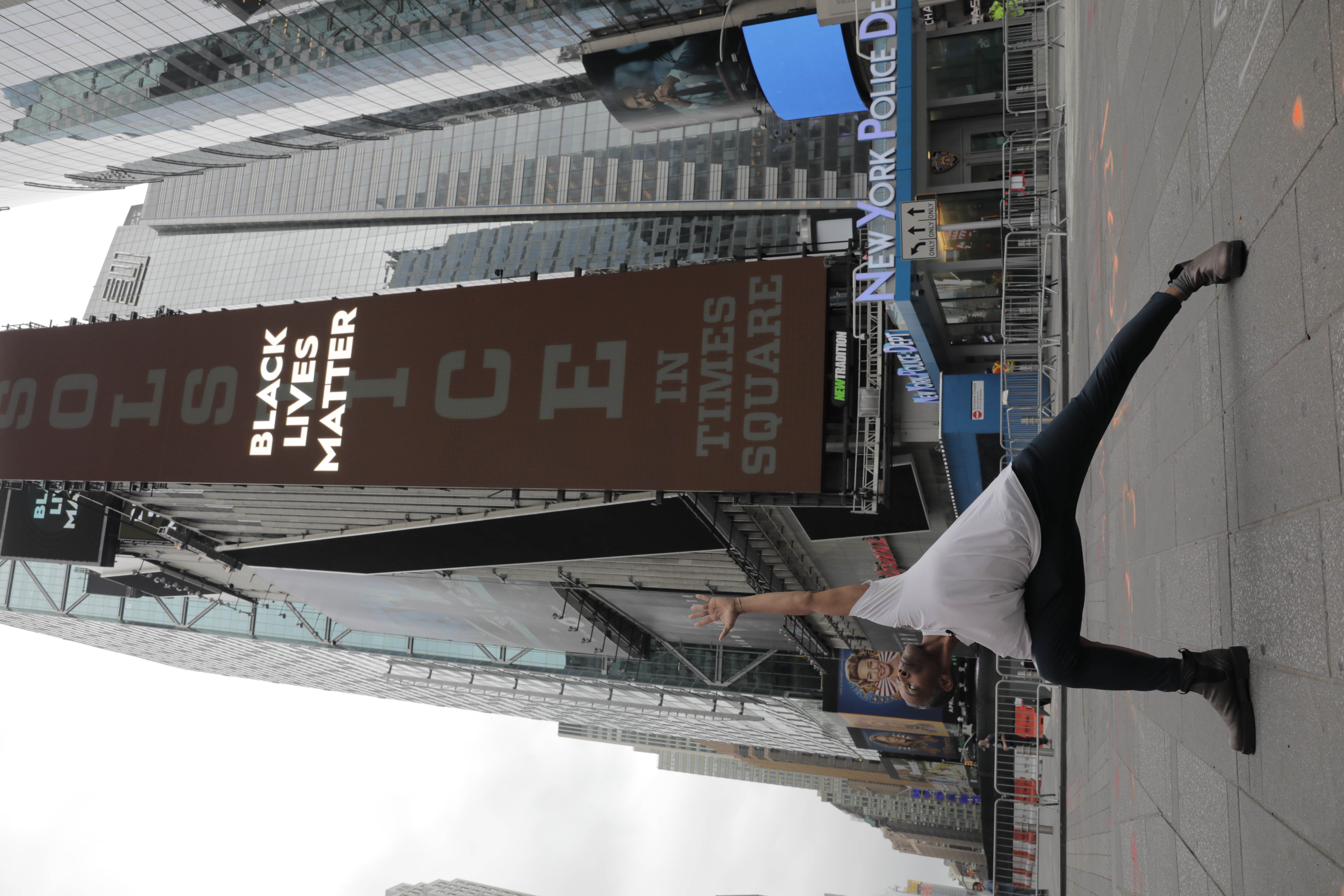 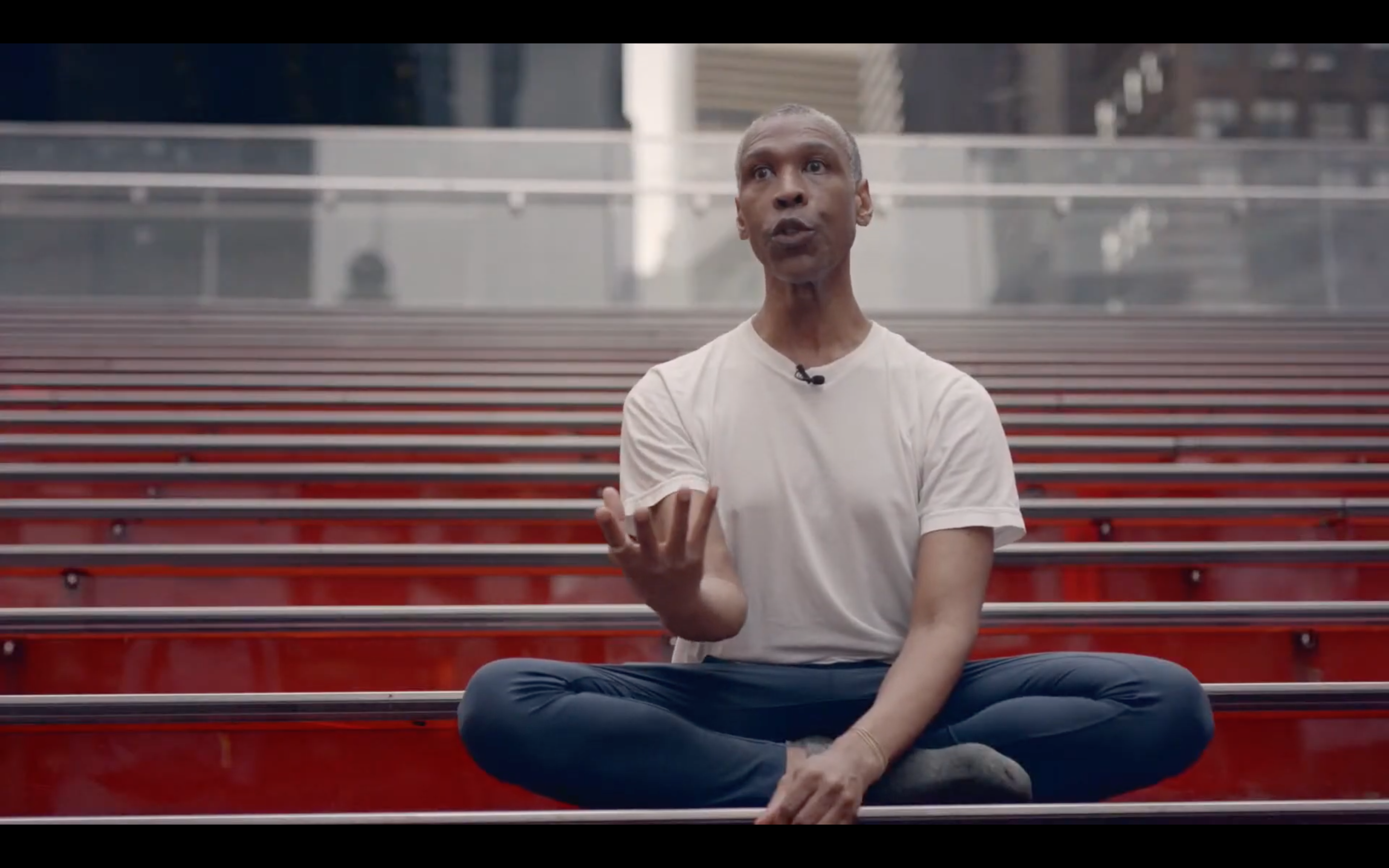 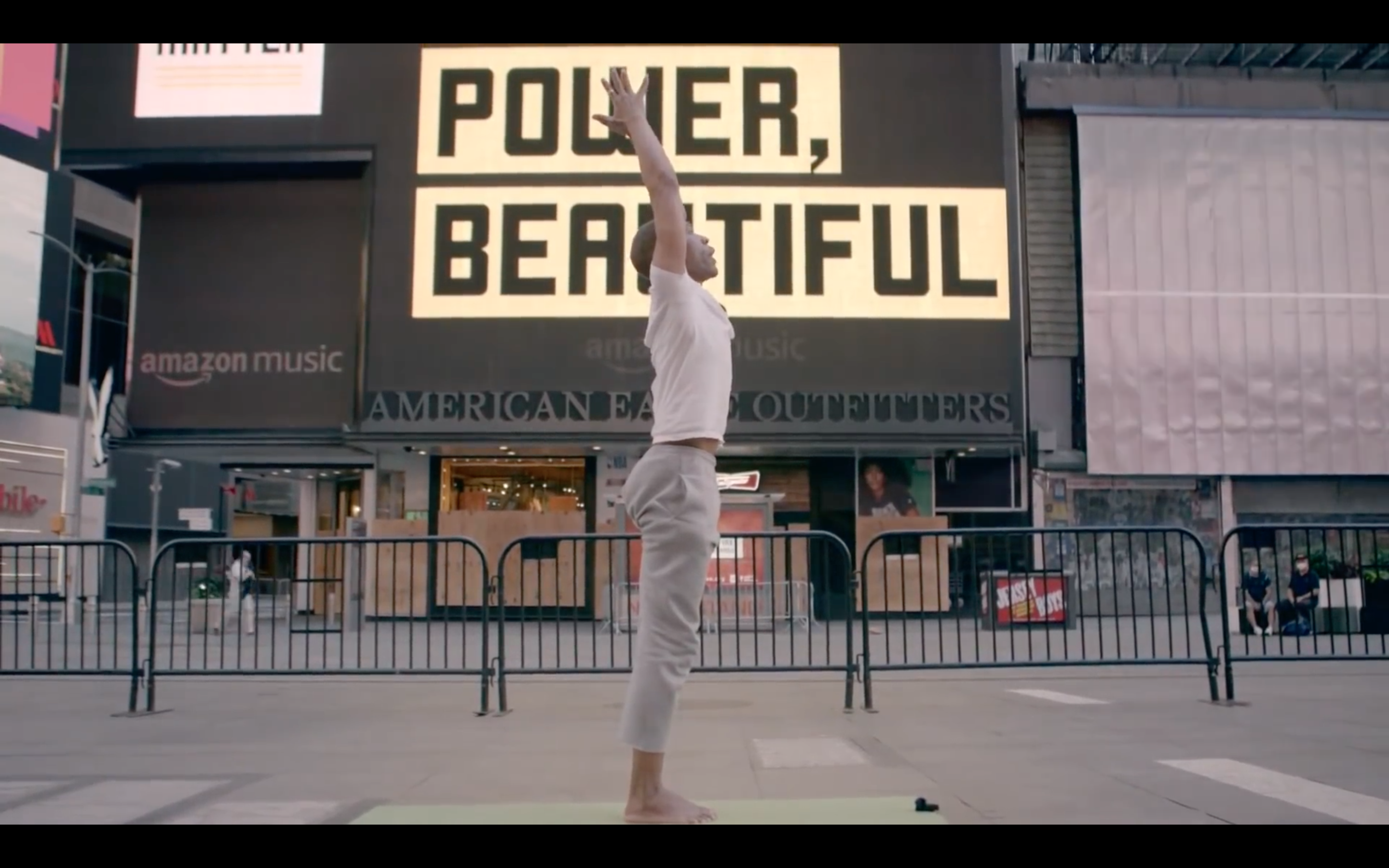 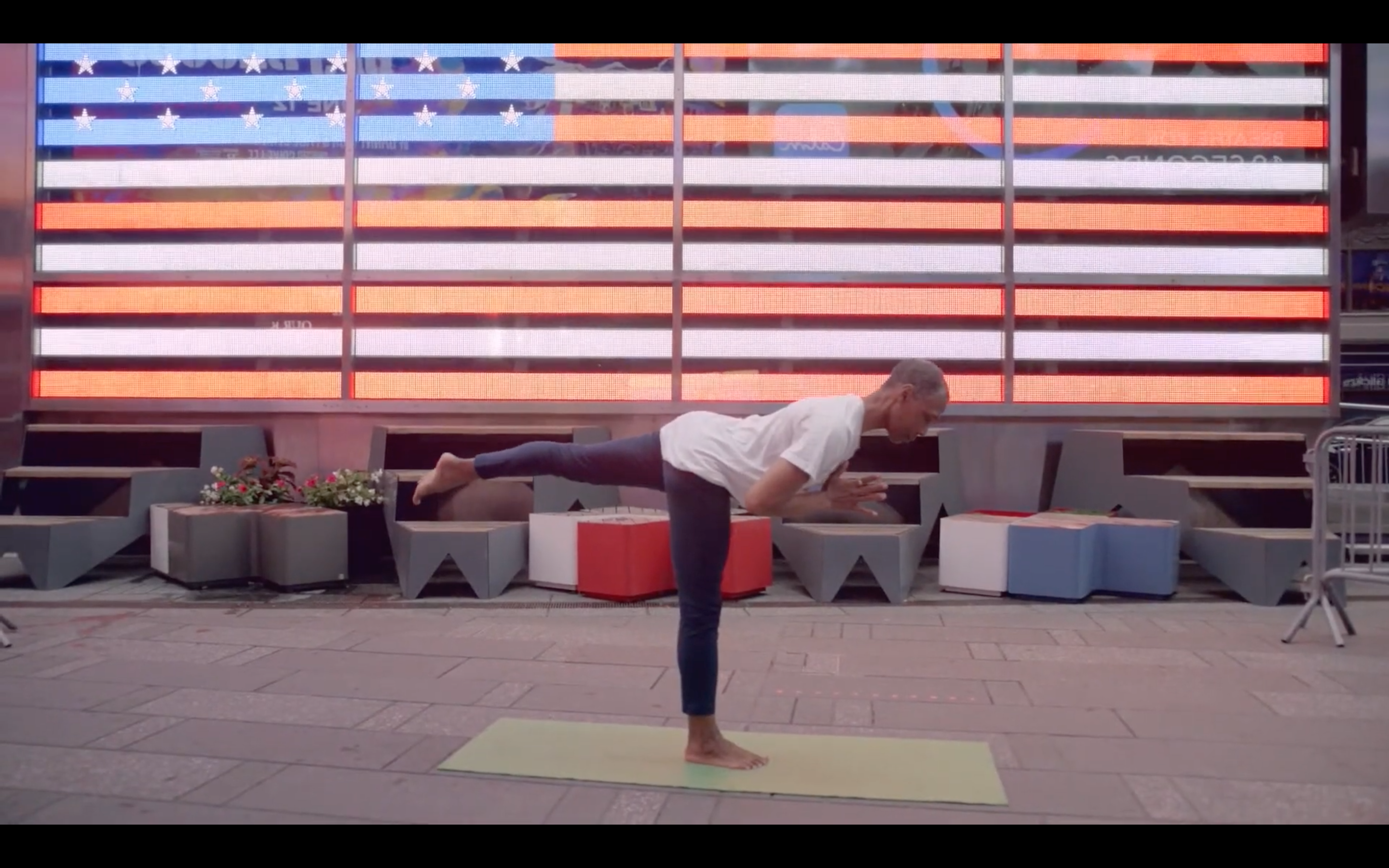