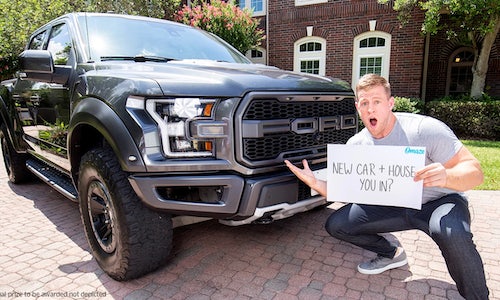 JJ Watt, who is known for dreaming big, giving back and mobilizing his fans for good, partnered with the online fundraising platform Omaze in 2019 to raise funds for his organization, The Justin J. Watt Foundation. Omaze offers people around the world the chance to win incredible experiences and prizes to benefit hundreds of charities, and they use comedic, viral videos as the one of the main vehicles to spread the word and maximize impact.

The end goal of the partnership was to raise as much as possible for The Justin J. Watt Foundation, which provides after-school opportunities for kids to get involved in athletics, and help them learn about accountability, teamwork, leadership, work ethic and perseverance in a safe and supervised environment with their peers. This cause is incredibly important to J.J., so this activation was laser focused on driving as much impact as possible.

The implementation began with a creative brainstorm to develop a concept for a once-in-a-lifetime experience, and a tentpole viral video to excite J.J. fans, encourage them to donate, and make this fundraiser as big as possible.

Omaze runs sweepstakes where they offer people around the world the chance to win incredible experiences and prizes to benefit charities around the world. But what makes the Omaze team truly unique is the company’s creativity and their ability to develop dream come true experiences, and translate them into a huge impact. To raise as much as possible for his foundation, J.J. and Omaze brainstormed a true once-in-a-lifetime opportunity for fans to enter for their chance to win. The team came together to develop the concept of J.J. changing someone’s life. At the end, one lucky, randomly drawn winner would be flown down to Houston to meet J.J., where they would receive $100k and a brand new Ford Raptor.

J.J. was committed to creating a piece of shareable comedic content to spread the word about his Omaze experience to fans everywhere. He worked closely with the internal Omaze team to develop a concept that would surprise his fans and present himself in a fun self-effacing way. Omaze pitched a mockumentary concept about a previous doomed attempt by J.J. to change people’s lives with the creation of the ill-fated J.J. Bot. This premise allowed J.J. to humorously take on the challenge of playing two roles: a megalomaniacal version of himself, and a poorly-designed robot. J.J. held his own while starring in scenes opposite film legend Arnold Schwarzenegger.

The video was the tentpole activation to spread the word about the experience. With J.J. 's social support and the full Omaze engine activated, the video and the chance to win spread across social media and fans from around the world entered for their chance to meet J.J. and have him change their life.

Overall, the experiece was an incredible success, and became Omaze’s top grossing talent partnership to date. In just under a 100 day-long campaign, the videos that Omaze ideated, directed, produced and edited garnered over 1.6M organic views. Omaze’s social, performance marketing and PR teams were activated to spread the word as far as possible and encourage donations.

Ultimately, over $1.5M was granted to the cause through Omaze’s relationship with CAFA (Charities Aid Foundation of America) in order to further their mission of providing after-school opportunities for middle-schoolers to get involved in athletics. To date, The Justin J. Watt Foundation has donated over $5 million dollars to get boys and girls involved in more than 14 different sports, and the incredible generosity from this campaign helped them continue to empower and inspire children through the power of sport, a cause incredibly important for JJ and his fans.

Video for The J.J. Bot