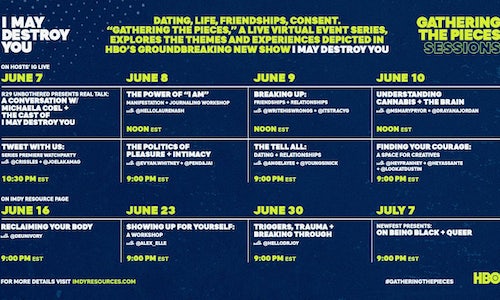 I May Destroy You

In support of Michaela Coel’s new show I May Destroy You, a story that takes an authentic look at sexual assault, seamlessly weaving in human moments of humor and levity with more sobering experiences of trauma, the team aimed for an approach that was thoughtful to both the subject matter and to our core audiences within the Black and Queer communities. Along with drawing in viewers, our campaign was created to drive conversation, around topics not often spoken about, and community, around an audience who we’ve rarely seen centered in these kinds of narratives. With our campaign, we sought both breadth and depth in the conversations occurring around the series to drive meaningful engagement that could last 12 weeks.

In early planning stages, we hoped to create physical spaces for our audiences to interact with the content via wellness related workshops. Our goal was to prime audiences for the heavier topics raised in the series, and emphasize the importance of self care. With the realities of COVID-19 setting in and the shift in our nation’s climate, the plan pivoted quickly to digital and community was more than ever central to our plans. Our social-friendly campaign was named #GatheringThePieces, inspired by a phrase from the trailer, when Arabella (our main character) begins to unravel the details of her own trauma. This series tackles consent and sexual assault in a way never seen before, with Michaela Coel bringing her voice and unique touch while centering the story around a Black Woman’s perspective. Looking at the prevalence of sexual violence, communities of color are amongst those most disproportionally affected and also amongst those likely not to report. “Gathering the Pieces” was an opportunity to give our communities a space and the tools to unpack, connect and to grow.

Our efforts began with a robust seeding kit, built on ideals of mental wellness, self-love, and creating connections and representing six self-care themes: Pause // Write it down // Talk it out // Reach out // Have patience with yourself // Treat your body with care. Items included a silk pillowcase, custom eyemask, We’re Not Really Strangers card game, illustrated custom postcard, diffuser with essential oils + tea blend, and custom puzzle. Curated with Creative Collective NYC and Therapy for Black Girls, our partners sought out Black-owned businesses and amplified the messaging of #GatheringThePieces on their own influential Instagram feeds with custom social assets.

On premiere day, we introduced the dynamic series cast with an exclusive roundtable on Refinery29’s Unbothered Instagram account, intentionally chosen for Unbothered’s reach and position amongst Black women.

The crux of the campaign fell on our workshop series, all helmed by members of our influencer collective, or host committee. Workshops included “The Power of “I Am” by @hellolaurenash, “The Politics of Pleasure + Intimacy” by @evyanwhitney + @pendajai, “Breaking Up: Friendships + Relationships” by @writehiswrongs + @itstracyg, “The Tell All: Dating + Relationships” by @angelayee + @youngsinick, “Understanding Cannabis + The Brain” by @msmarypyror + @drayanajordan, “Clarifying Consent + Modern Dating” by @heyfranhey + @heyassante + @lookatdustin, “Reclaiming Your Body” by @deunivory, “Showing Up For Yourself” by @alex_elle, “Triggers, Trauma + Breaking Through” by @hellodrjoy, and “On Being Black + Queer” by NewFest.

Our hosts--experts in their niches--created workshops true to their communities and brands, driving buzz to their respective workshops and the overall campaign. 24 Black influencers came together to support the show’s messaging and unpack themes from the show. For three days post-premiere, workshops launched morning and evening. Beginning episode 2, for four weeks, sessions included heavier topics, such as trauma and sexual assault. Workshops streamed on Instagram Live or HBO.com on the show resources page to spotlight trauma services and permanently lived on the show’s official site.

Nineteen outlets, including Variety, AdWeek, Shadow and Act, Los Angeles Times, Nylon,  Digital Spy, Fast Company, and more, covered the campaign and yielded 145,615,501 press impressions. Recipients of the kit shared images and videos of the unboxing widely on Instagram, resulting in over 80 organic social posts and nearly 2.1M impressions. And the “Gathering the Pieces” workshop series garnered 1M and counting, as the conversation permanently housed on the imdyresources.com page.

TOP ACCOUNTS THAT SHARED CONTENT FROM THE CAMPAIGN INCLUDE:

Video for I May Destroy You 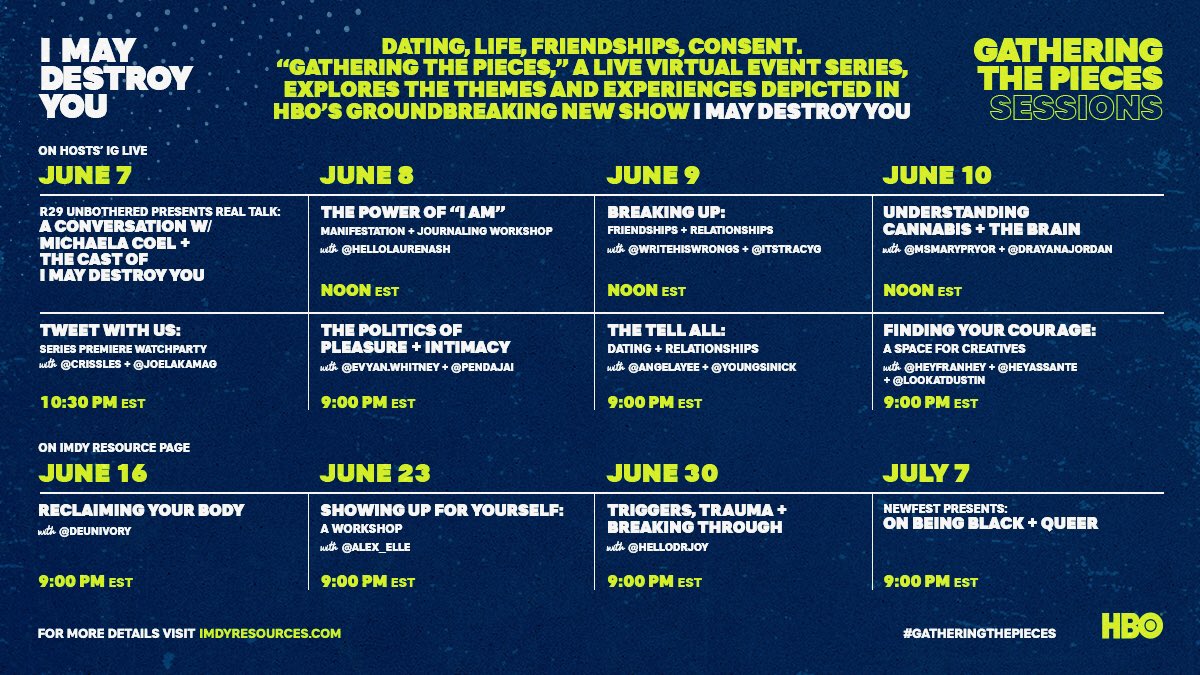