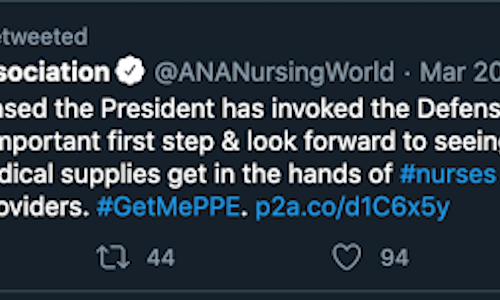 As Covid-19 became a national emergency, America’s nurses were the first to encounter challenges as they tackled the pandemic head on. As they worked long shifts caring for patients suffering from the virus, they quickly began to see a lack of protective gear available, putting them and their families at risk.

The American Nurses Association has worked for more than 100 years to represent the interests of more than 4 million registered nurses in America, with a presence in all 50 states and all U.S. territories. Their role was clear and they  immediately launched a campaign to safeguard the nurses it represents. The goal was to obtain proper protective gear and to increase federal funding for frontline workers.

The ANA mobilized hundreds of thousands of nurses across the country facing protective gear shortages. From the east coast to the west coast, ANA collected stories from hospital nurses forced to improvise protective equipment, attempting to save someone’s life while risking their own. Their social media push amplified the message and raised awareness of the reality that healthcare workers were facing dangerous—sometimes life-threatening—circumstances. Pictures of nurses in New York and elsewhere having to use trash bags to protect themselves soon went viral.

Additionally, ANA began holding live twitter chats, where nurses would answer questions from the general public. Using hashtags like #RNAction and #GetMePPE, many nurses engaged. People asked how they could help, and what actions they could take to pressure authorities to provide more resources.

Nurses, being the first frontline workers impacted by the pandemic, were able to mobilize not only their own, but other healthcare workers and members of the public, who took to social media to support their cause.

The results were outstanding. In just a few days they had more than 114,000 individuals contact their lawmakers demanding that healthcare workers, specially nurses, be provided with the appropriate resources to battle the pandemic. The general public became highly aware of the need for such equipment. The conversation did not stay on social media, but spread to traditional news outlets. During the months of March and April, New York City suffered greatly due to the pandemic, and ANA’s campaign was timely in achieving awareness. The idea that healthcare workers were highly exposed and could get sick underlined  the important role of nurses with lawmakers. Ultimately, more than 350,000 messages were delivered to lawmakers—and the organization is not done. They have continued to launch advocacy campaigns to raise awareness and advocate for hazard pay, mental healthcare, protecting jobs and other needs nurses are facing as the pandemic continues.