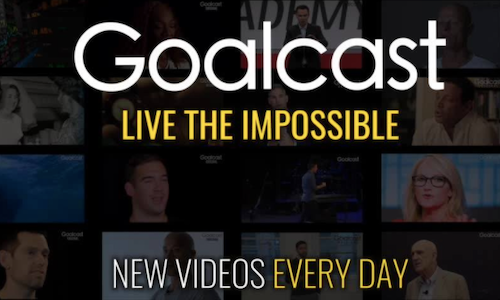 Goalcast’s objective is to become the world’s leading source of empowering short form content. We continuously push the envelope of storytelling so we can help our audience heal, catalyze change and achieve greatness.

For generations people have gathered around to share learnings and convey our view of the world through stories. The only difference now is that instead of drawing stick figures inside cave walls, we’re using our social media feeds as our canvas. Goalcast stories enable us to share experiences, to reminisce, to dream. They promote the positive influence of others and inspire us to connect with ourselves and each other. Most importantly though, our stories mobilize our audience to change the world.

Changing the world is not something we take lightly or use as a turn of phrase. Our stories change and even save lives. Don’t just take our word for it, though. Here is what a few of our community members have to say:

“My whole family were heroin addicts. I’ve seen my brother overdose and die right before my eyes. I was also an addict and 300 pounds overweight. I’ve started watching your videos daily. I’m now 2 years sober and lost 200 pounds. Thank you Goalcast, you saved my life.” -  Chris Gianfrancesco

“Goalcast has helped me through understanding what other people have struggled with and have overcome, the abilities and attitudes I can put forward in front of my own obstacles, to conquer fear and explore my limitations; to become a better human.” Anonymous

Goalcast found its early success in turning great speeches into motivational masterpieces. Through the use of images, b-roll and music, we can turn a commencement speech into a Hollywood-style production. Over the last four years, we have become masters at tapping into people's limbic system, triggering moments of cathartic transformation and empowering people to take action. As we’ve evolved as storytellers, so too has the world’s preferences for the stories they consume on social media.

Audience engagement and performance data continues to show a preference for slightly longer, higher production and original content. In response, we are evolving our storytelling to ensure that we exceed our viewer’s expectations and capitalize on the trends we’re seeing to further our mission of creating social good. As a result, we have introduced two new verticals: short documentaries and short films. Short documentaries are scripted by Goalcast and share the often untold backstories that lead to someone’s success. Existing, and in some cases original footage, is used to tell a story of challenge and triumph. Short films are scripted, directed and produced by Goalcast. They are based on true events that are universally relatable and feature actors.

A recent short documentary features athlete, speaker and soldier, David Goggins. He is known as the toughest man on the planet. Everybody thinks he’s Superman but his internal battle was tearing him apart. In this video, we combined existing and original footage to tell the story of a secret he hid from the world and why he felt the need to finally speak his truth.

Busy Dad Gets Wakeup Call is a prime example of our short films. This film is inspired by a true story and was created to remind preoccupied parents of what truly matters. It features a man who prioritizes closing a business deal over the promise he made his son and the valuable lesson he learns from his colleagues.

“I loved his story, it’s amazing how you can feel other people’s pain. From the beginning of the story tears flowed until the end.” Brenda Lundy

“I recently had weight loss surgery and even though I lost a good bit of weight, I began to feel as though I couldn’t do this anymore. After hearing your testimony, I’ve been empowered again to face all my challenges which include eating right and getting off my butt and exercising.” Catherine Griffin

“Thanks Goalcast. I’ll make sure that I honour promises that I have made before it’s too late.” Rachel Wangari

“After I watched this video yesterday I called the best soccer club league I could find. I spoke with someone higher up and they spoke with the head coach of the whole league. The same day I got an email saying bring your child in to see her skills. They liked what they saw and wanted her to come back again for another round. I've been promising her this opportunity for 2 years now and honestly I didn't even know she was this good until last night. She was so proud of me and felt like I listened to her heart for the first time in a very long time. Thank you.” Tiffany Walker

Video for Goalcast best in storytelling