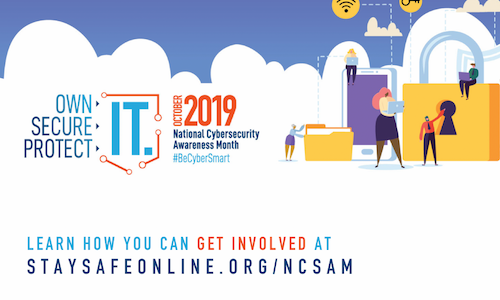 Since 2003, the National Cyber Security Alliance (NCSA) has co-led its annual National Cybersecurity Awareness Month (NCSAM) with the Cybersecurity and Infrastructure Security Agency (CISA) and has worked collaboratively with the government and the private sector to provide Americans with easily accessible resources to protect themselves from cyber threats. In 2019, NCSA intended to build a new framework and revamp the organization’s online visibility for National Cybersecurity Awareness Month in October. The campaign aimed to encourage proactive behavior in digital privacy, security best practices, and protection against common cyber threats through driving engagement and sharing key messages.

The 2019 National Cybersecurity Awareness Month theme, ‘Own IT. Secure IT. Protect IT.’, focused on emphasizing personal accountability and stressed the importance of taking proactive steps to enhance cybersecurity at work, home, and school. The messaging was intended to drive home the importance of personal responsibility in an ever-changing digital world. The social media campaign sought to encourage consumers to familiarize themselves with privacy settings on their everyday devices and applications in order to safeguard their privacy and protect themselves from cyber threats. The objective was to capture widespread attention by amplifying the messaging with NCSA partners and Champions to garner more engagement with content. Though the previous year proved to be successful, NCSA planned to surpass the NCSAM efforts of 2018.

The 2019 National Cybersecurity Awareness Month campaign focused on evoking behavioral changes that foster a culture of cybersecurity for consumers, businesses, and workforce with an emphasis on personal responsibility. The content was thoughtfully curated and included educational resources such as tip sheets with easily digestible information, visually appealing infographics, captivating blogs, and engaging webinars. The campaign kicked off in September and ran through the month of October on Facebook, Twitter, and LinkedIn.

A way to get the campaign in motion was the use of influencers. Enter NCSA’s NCSAM Champion program and partner collaborations; the crux of the campaign’s success. NCSA’s Champion program is an influencer initiative to leverage the organizations and individuals who are committed to keeping us all safe and secure online while increasing the resilience of the nation against cyber threats. The program provided both individuals and organizations the opportunity to support and engage in activities throughout the month, and their promotion would have an extended reach on a national level while also reaching Champions’ social media audiences. Once an organization or individual signed up to become a Champion, they received a toolkit to aid in implementing their own cyber awareness initiatives. The materials focused on encouraging digital hygiene involving citizen privacy, consumer devices, and e-commerce security to share on their social platforms throughout October.

Enlisting the support of industry and federal partners at DHS, FBI and NIST, along with NCSA board member companies including Facebook, Bank of America, Wells Fargo, Uber, Eli Lilly, LogMeIn, Visa, Mastercard, and Microsoft (among others) was an unequivocal way to obtain additional promotion for the campaign.

Social media users were encouraged to use the 2019 NCSAM hashtags #BeCyberSmart and #CyberAware to engage in and follow the conversations surrounding cybersecurity on all platforms. Major partners like Android used the hashtag #BeCyberSmart with a video on how to protect privacy with an Android to its 10.9 million followers. The FBI used the hashtag #CyberAware and tagged NCSA in tweets with social media graphics from the NCSAM toolkit to its 2.6 million followers.

There was no shortage of content for this campaign. NCSA hosted a variety of webinars and a Facebook Live events, all geared towards highlighting the NCSAM theme that was promoted from mid-July through the end of October. Twenty three blog posts addressing thought provoking topics such as multi-factor authentication on college campuses, and improving cyber literacy and neurodiversity were promoted. Blogs highlighting the ‘Own IT. Secure IT. Protect IT.’ theme also provided resources and pointers for small and medium-sized businesses.

NCSA’s abundance of content and strategic use of influencers was significantly instrumental in driving the success of NCSAM and surpassing the benchmark of the year before. The public/private partnerships with high caliber companies and government organizations gained traction for the campaign. However, it was the Champions program spanning across academia, small and medium-sized businesses, fellow nonprofits, and individuals who made the campaign flourish.

NCSA published a total of 196 posts resulting in interactions that increased by 217.71% compared to the previous year. Audience growth also saw an increase.

The Champion program proved to be extremely successful with a combined reach of 50.4 million. There was a total of 2,477 Champions, a 16% increase from 2,139 in 2018. This includes 1,649 organizations (a nearly 20% increase) and 828 individuals (a 9% increase). The makeup of the program consisted of public and private organizations, government, and academia. 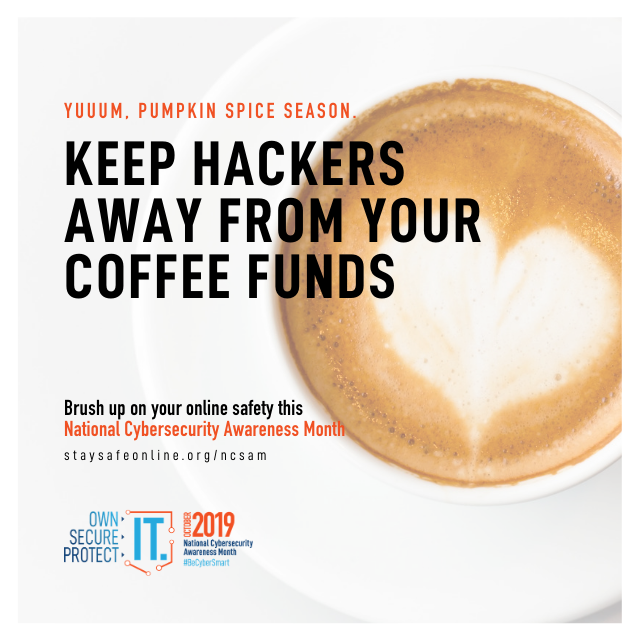 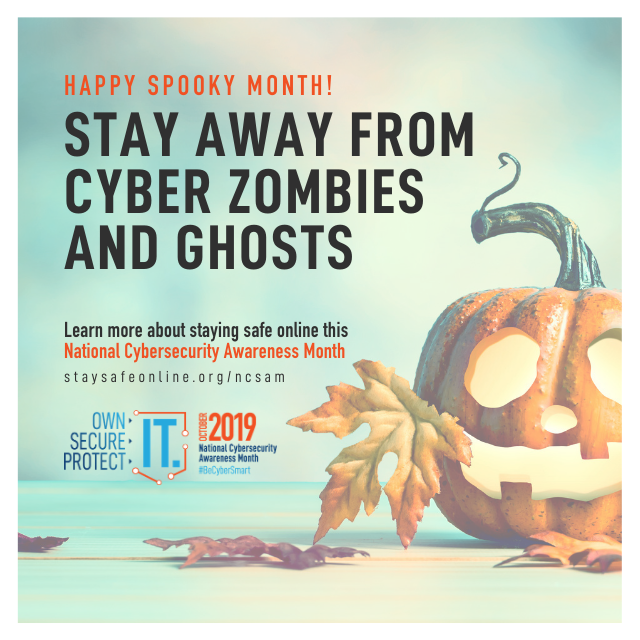 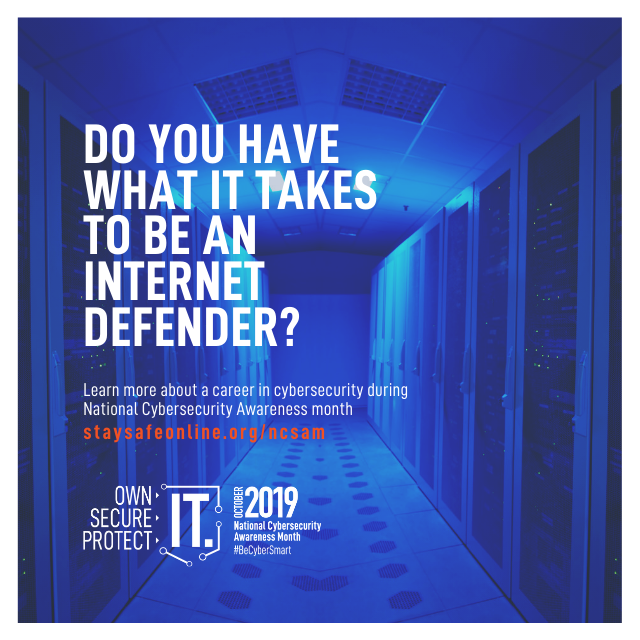 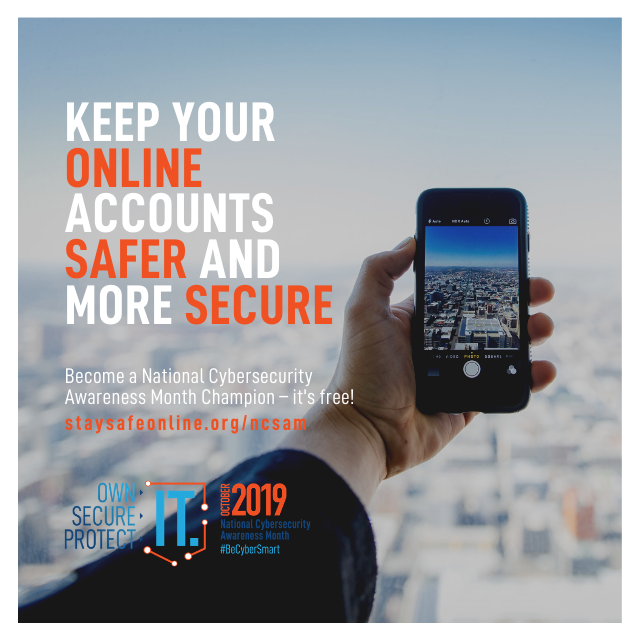 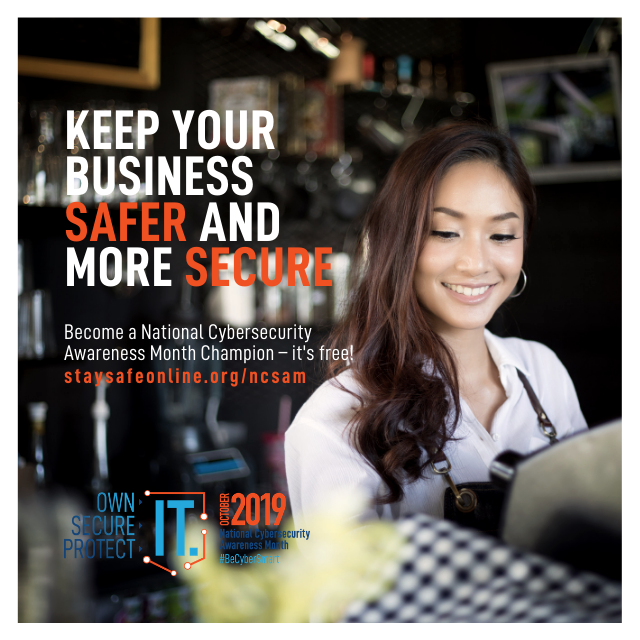 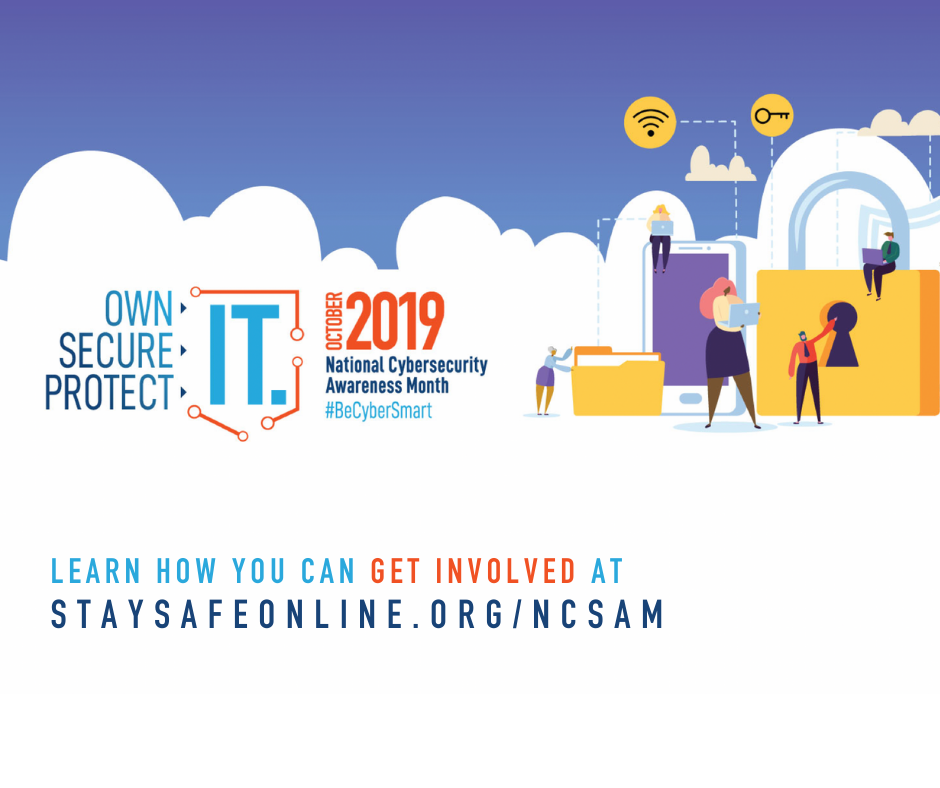 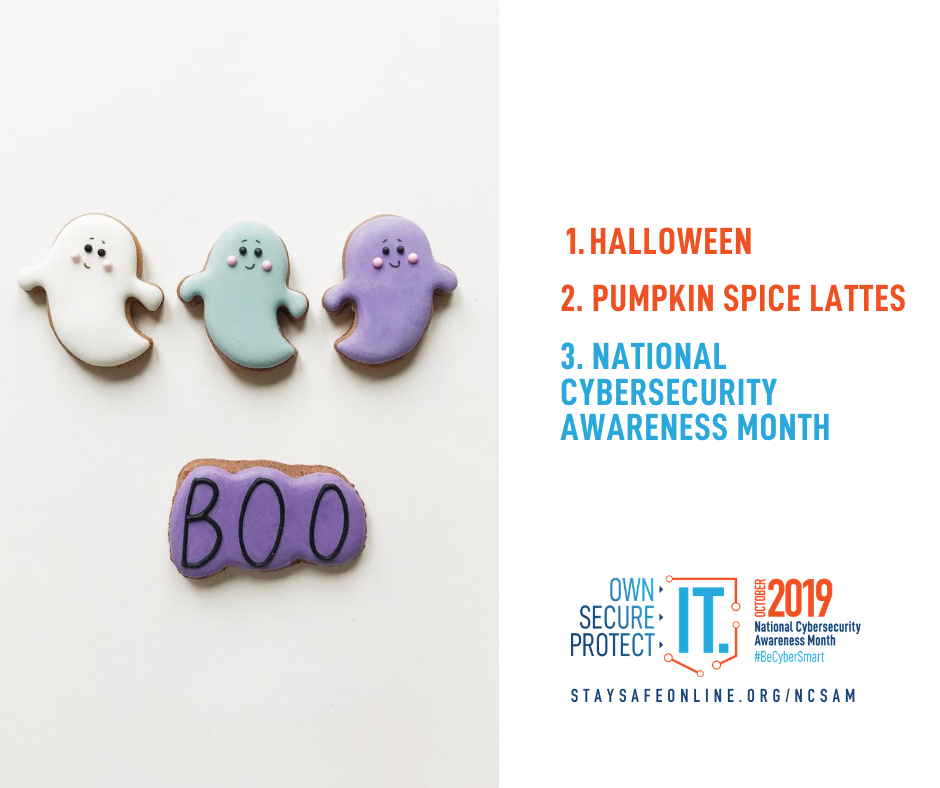 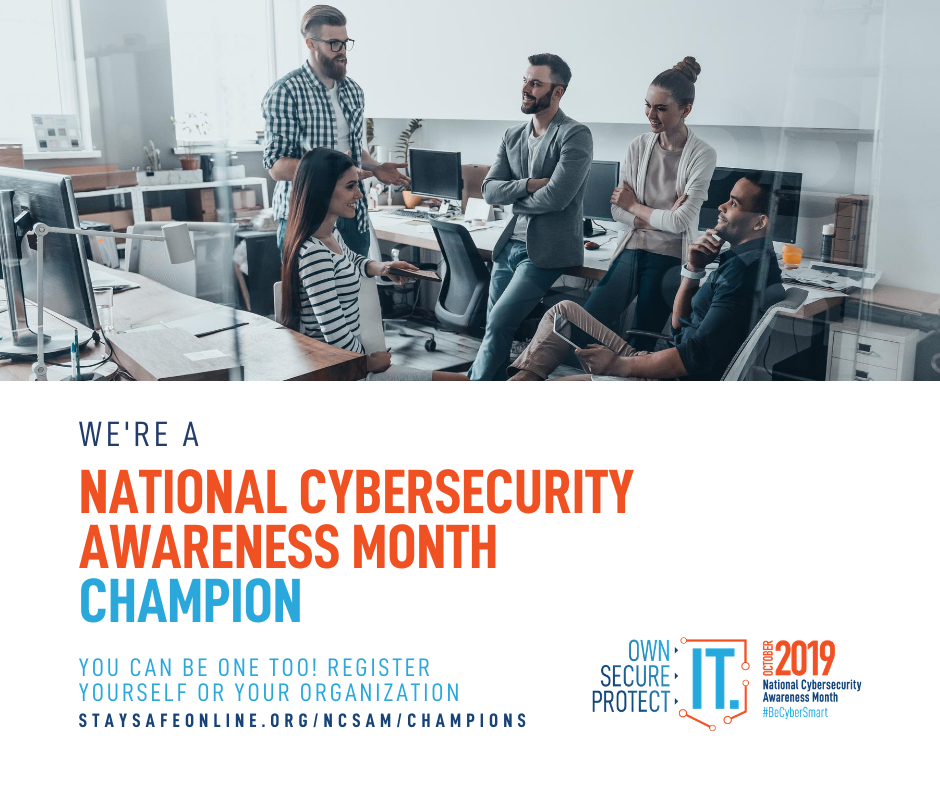 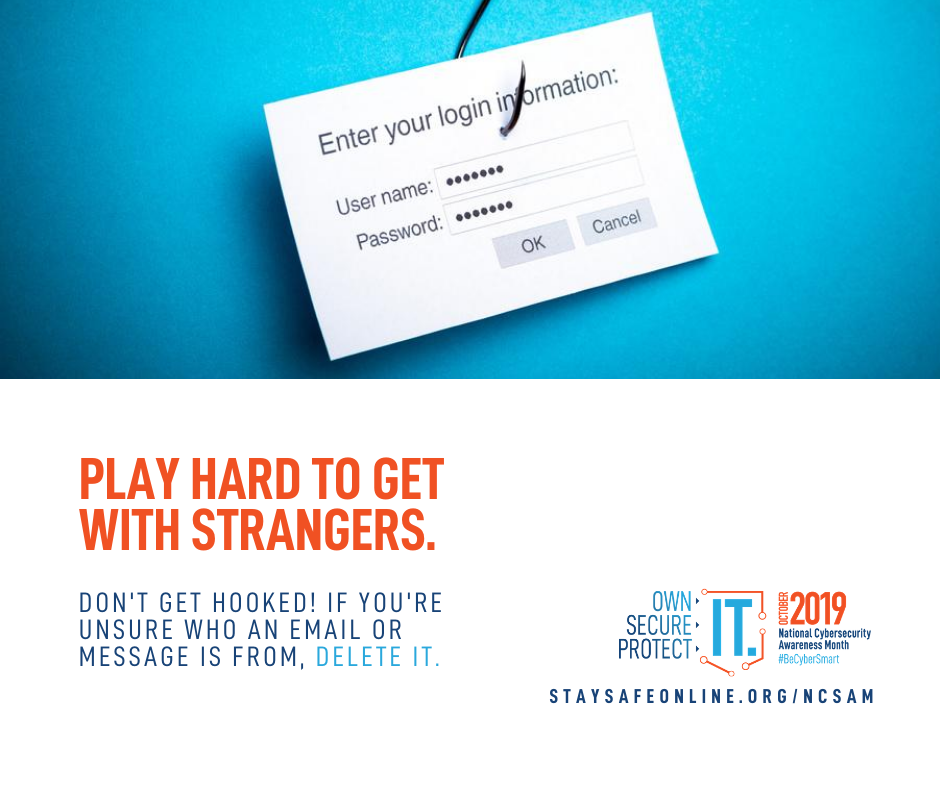 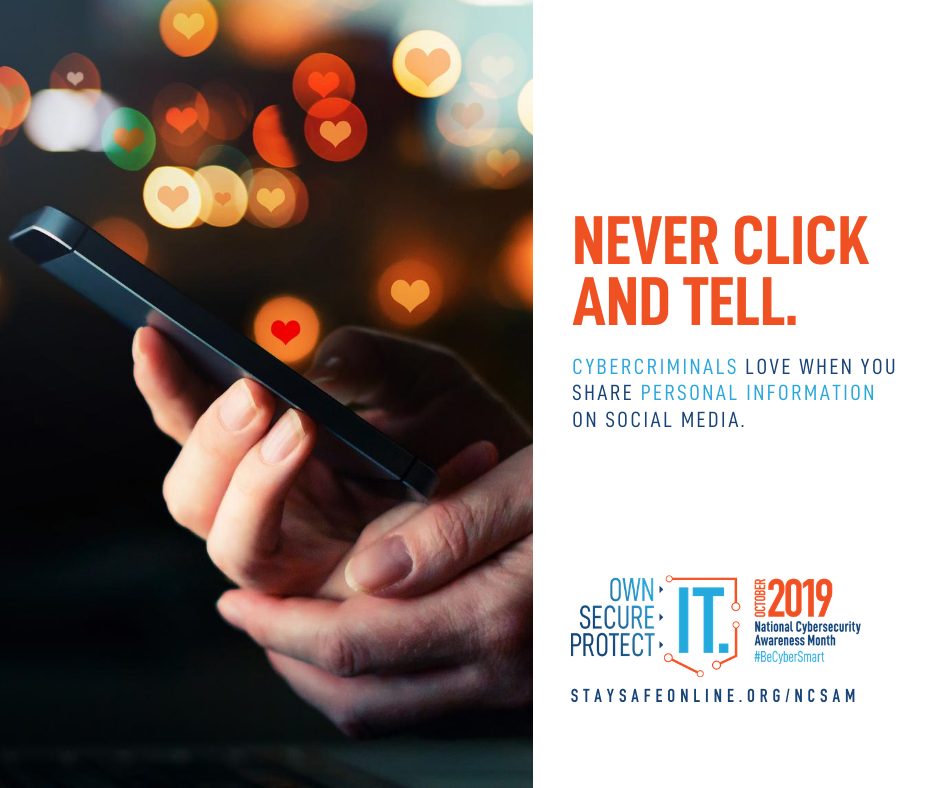