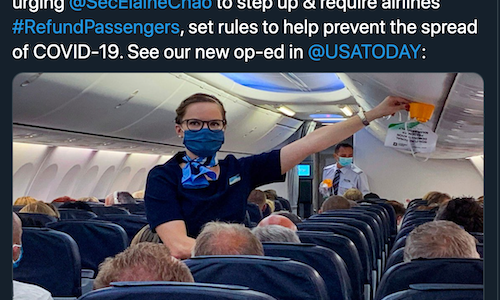 Consumer Reports’s mission is to help consumers make informed choices and to protect consumers through research, media and advocacy. When the COVID-19 pandemic hit, Consumer Reports wanted to engage people on issues that mattered most during the crisis—their safety, health and finances. So they launched the #PutPeopleFirst campaign with weeks of events, including direct advocacy, virtual information workshops and fundraising. The goal was to support consumers through these tough times and empower them when needed,  while growing the Consumer Reports audience as they help consumers stay safe during the adjustments the pandemic required.

Coinciding with a U.S. Senate hearing, Consumer Reports launched a congressional action campaign. CR was part of a larger coalition working to advocate on the latest relief legislation brought about by the pandemic. This effort was heavily echoed through social media channels. The campaign was meant to advocate for consumers who had purchased airline tickets but were seeing their plans change due to flight cancelations , border closings and airlines struggling to stay afloat financially. CR called on the airlines to give customers cash refunds instead of travel vouchers to be used in the future.

Their campaign mobilized high-impact advocacy to achieve powerful results. The inventive airline refund campaign asked people to take photos of themselves with a sign illustrating how much money they were owed, and by which airline. Advocates submitted photos in numbers far greater than CR anticipated. The high level of engagement is an indicator of the major impact lost travel money was having on household budgets. CR gathered the pictures and created collages, targeting the airlines across social media channels. See the campaign here.

Throughout the week, CR promoted and shared images (attached to this entry) on social media, prompting a tremendous response. CR also educated consumers on how to advocate for themselves with the airlines, using creatives such as “Five Tips to Get an Airline Refund Amid COVID-19.” In addition, CR co-hosted a digital press conference on refunds, during which a U.S. Senator introduced a new bill aimed at ensuring that airlines offer cash refunds. They promoted it on social media using #Refundpassengers and the umbrella hashtag #PutPeopleFirst.

The campaign for airline refunds drew more than 21,000 advocates who took action, making more than 66,000 connections with elected officials such as members of Congress and federal agencies. While most of the activity used email—the preferred method of communication for the U.S. federal government—the campaign generated high levels of social media engagement. More than 570 tweets and almost 1,900 Facebook shares targeted public officials and amplified the cause on social media, and that's not counting the thousands of individuals who shared their pictures and took to social media to demand their airline to generate a refund. In addition, the campaign surrounding relief legislation drew roughly 23,000 advocates who made 72,000 connections with public officials,  including 680 tweets and almost 1,700 Facebook shares.

Overall CR enabled more than 44,000 individuals to send more than 138,000 messages to legislators via email, twitter and phone calls, amplifying their message on social media with more than 3,600 total Facebook shares. 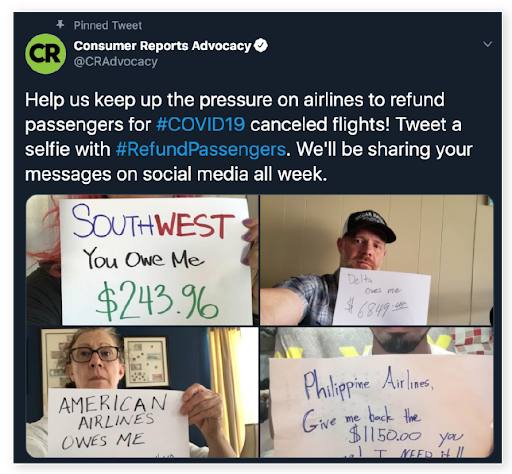 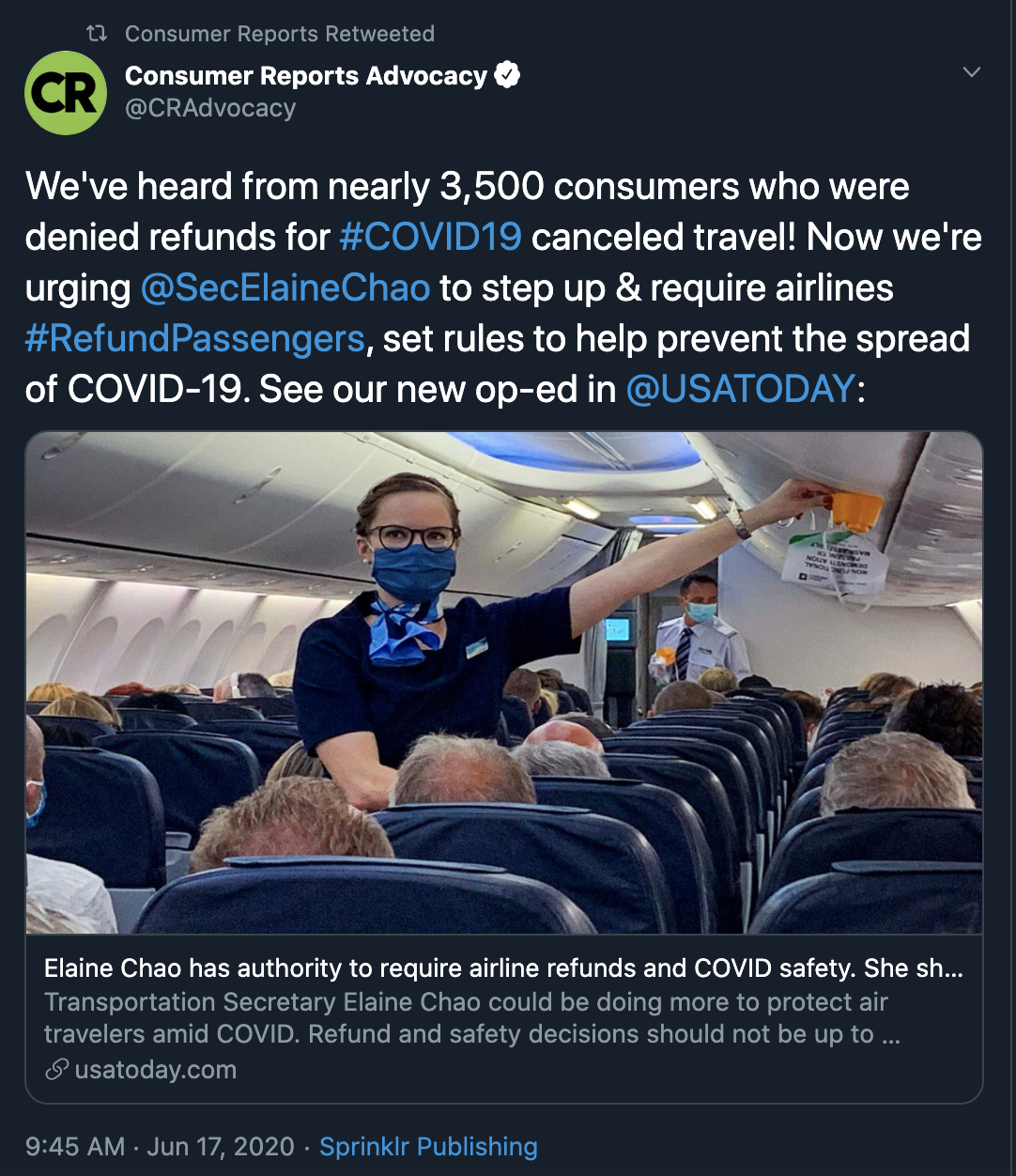 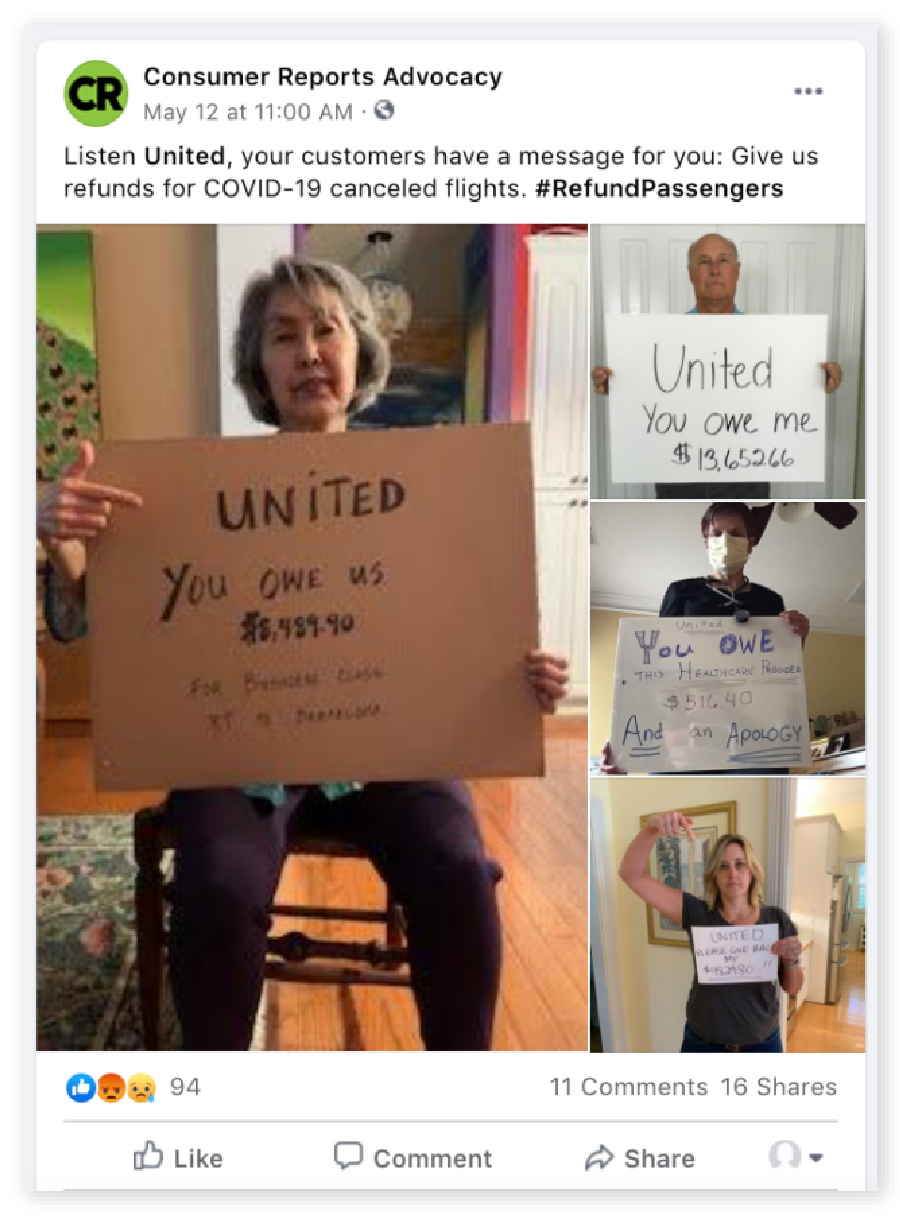 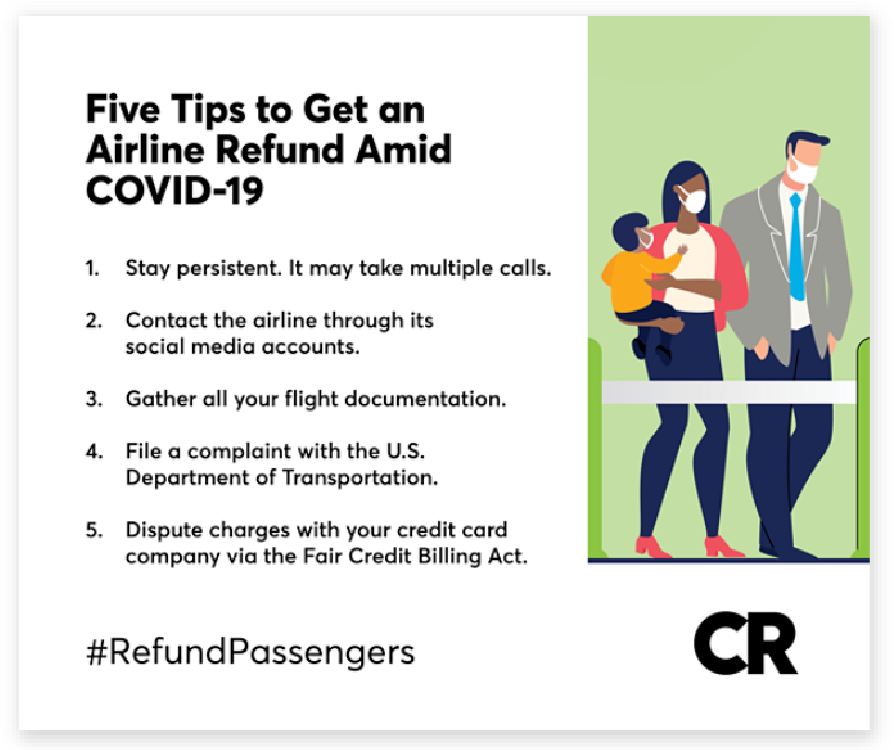 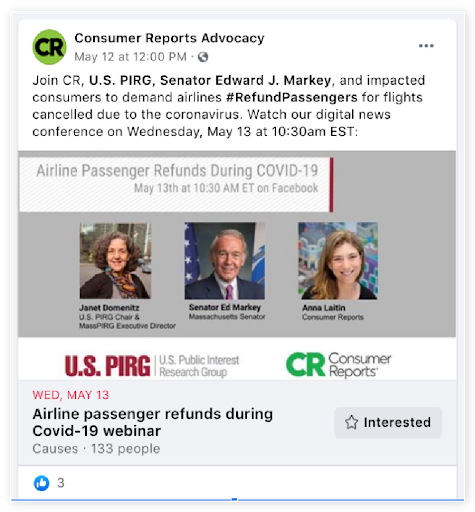