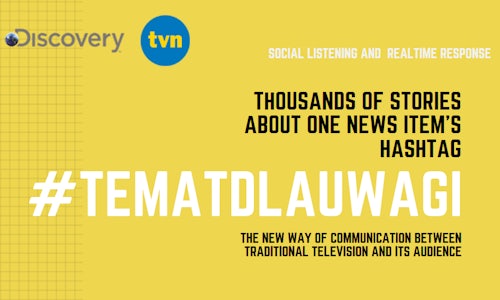 UWAGA! is a prime time daily show that has been broadcasted in TVN (the leading Polish TV channel that belongs to Discovery network) since 2002. Investigative in its form, it helps to track affairs and scandals happening in Poland, uncovers corruption and abnormalities, triggers social debates but first and foremost it helps common people. Our priority is to sustain and deepen the relationship with our audience. The viewers tell us about their stories, problems and expect support from our journalists. People call UWAGA’s hotlines, send emails and traditional letters. They are also the good observers. They can see the other people’s problems themselves and say: IT’S A NEWS STORY FOR UWAGA! They know that Uwaga! brings help. But what is the best way to hear the viewers’ voice?

We lived up to viewer’s expectations and created a new way of communication. We put their worlds „It’s a news story for UWAGA!” in a Polish hashtag #TEMATDLAUWAGI (#NEWSSTORYFORUWAGA) and invited them to deal with Uwaga’s editors on social media’s platforms. People publish their stories in social media using the hashtag #tematdlauwagi in public posts. It is enough to inform/interest our journalists about their issues, because we listen to them while monitoring the web in the real time! They also pin on the hashtag #tematdlauwagi when they comment somebody’s public post. The cooperation of the viewing audience and UWAGA’s editors brings content that we change into the features broadcasted in our show.

In August 2018 we built new hashtag’s platform dedicated to UWAGA! Thanks to that, we are able to analyze all the hashtag’s registrations inside it. The platform has tools, that help us in communication with applicants and build community around the single items. Big human stories we broadcast on TV. Smaller, but still important news items, we publish as features or news on UWAGA’s website. In November 2018 we launched the new website with a page dedicated only to the reportages from hashtag #tematdlauwagi and connected it with the hashtag’platform. Thanks to that we can pin on single story to the social hashtag’s map that is the important part of our website. You can see there many interesting viewers’ stories in different categories.

We are the only Polish show or newsroom that use such an unique hashtag to communicate with the audience, and what is the most important, to acquire items. Uwaga! makes people’s voice important. We listen up what they say and respond. Hashtag #tematdlauwagi is the fastest way to acquaint us of people’s stories and acknowledge their problems. At the same time it’s also the simpliest way, because the only thing that the viewers must do to inform us about their topic is adding the hashtag #tematdlauwagi under their post.  The cooperation of the viewing audience and Uwaga’s editors brings the best content to broadcast, but success of our hashtag can be measured by tags used to mark an interesting items to broadcast.

1 920 138 usd advertising equivalent. This is how much we would have paid to Facebook, if we had bought 79 525 paid posts promoting contact with our newsroom

Communication with the audience via hashtag helps to boost Uwaga’s social media platforms:

Video for THOUSANDS STORIES ABOUT ONE NEWS ITEM’S HASHTAG #TEMATDLAUWAGI 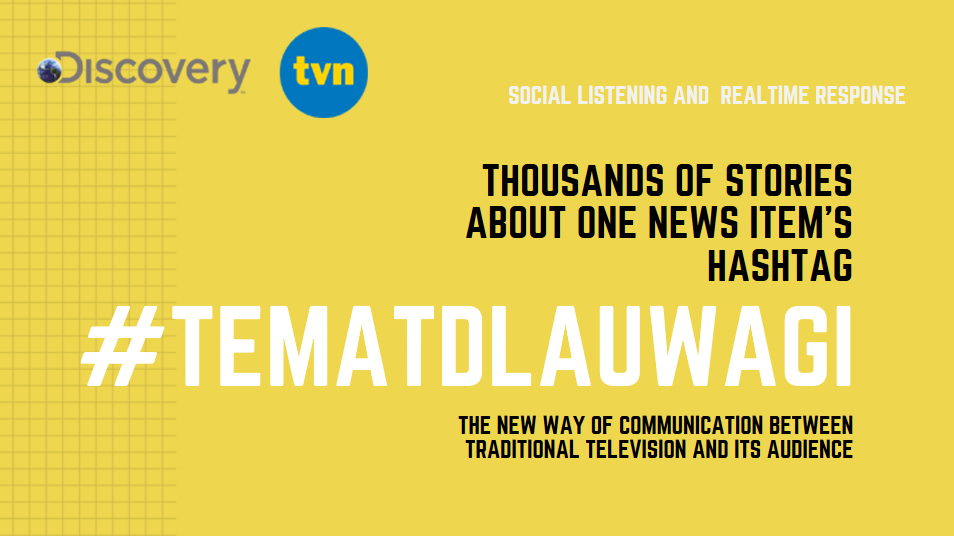 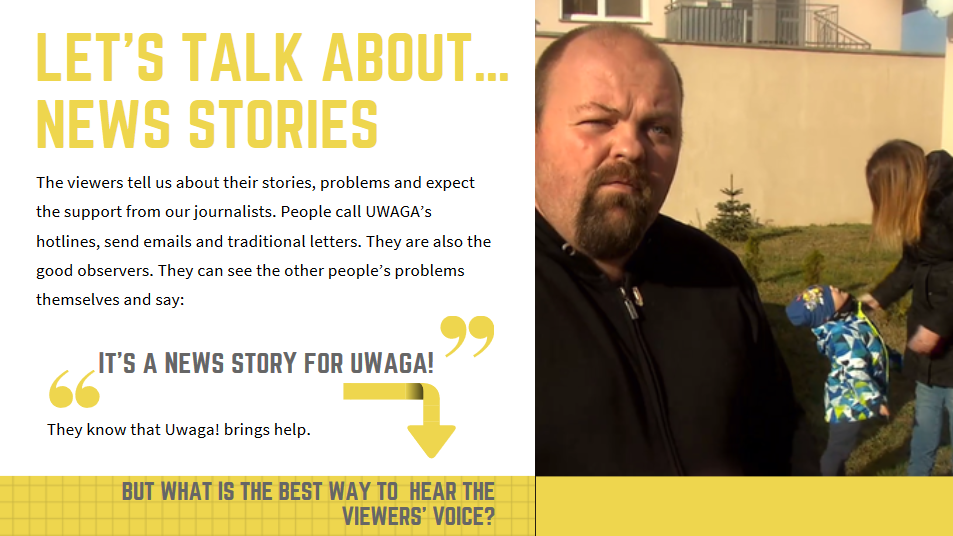 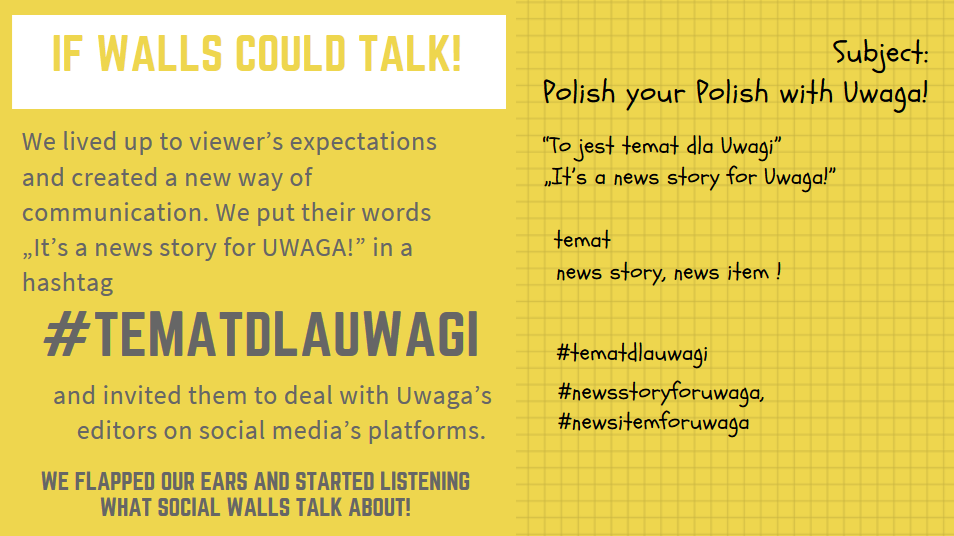 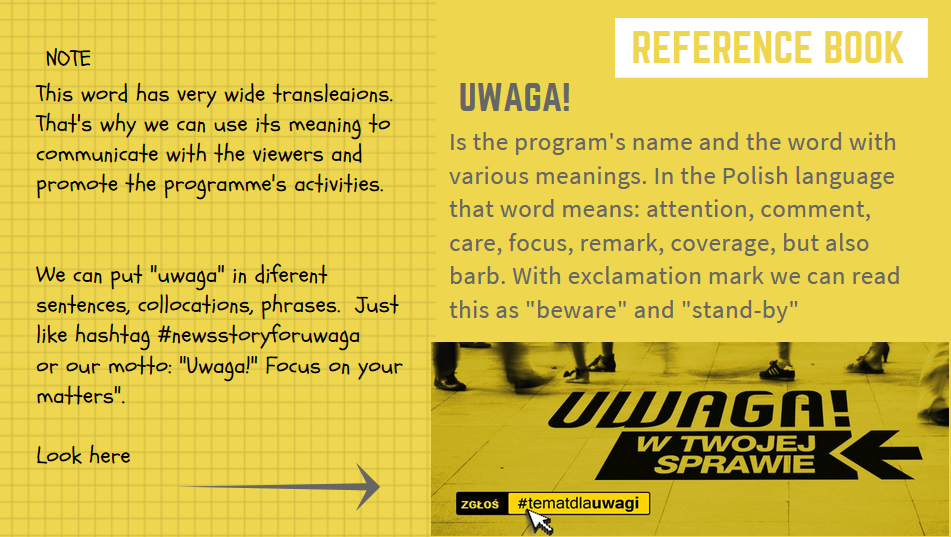 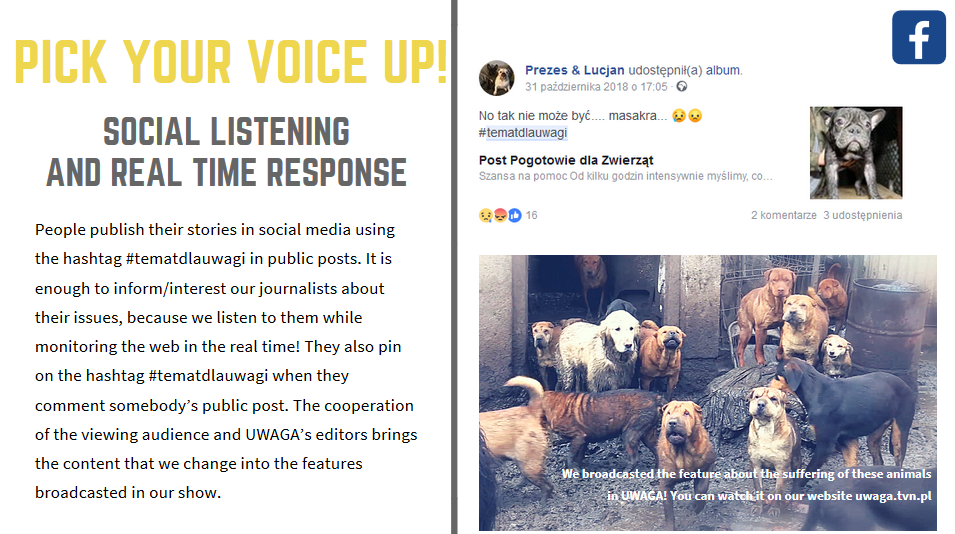 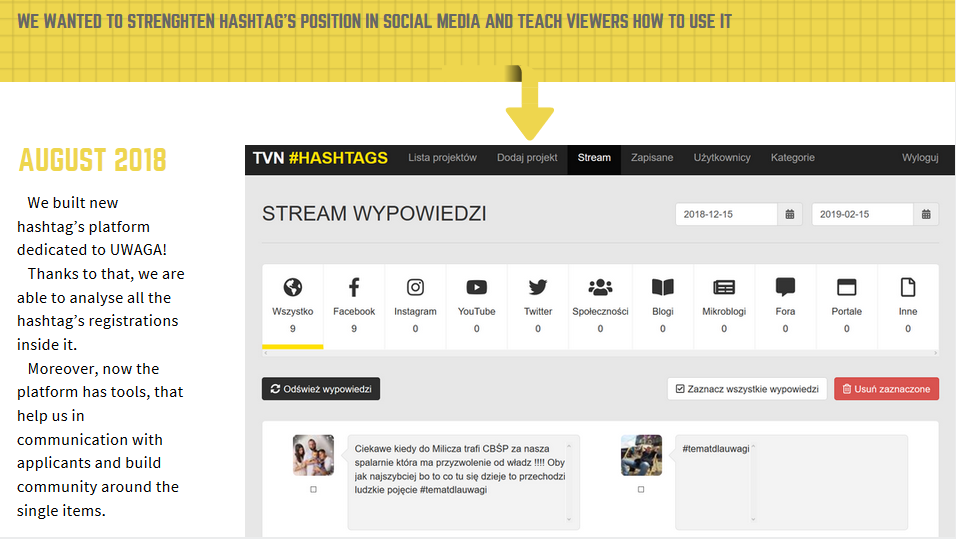 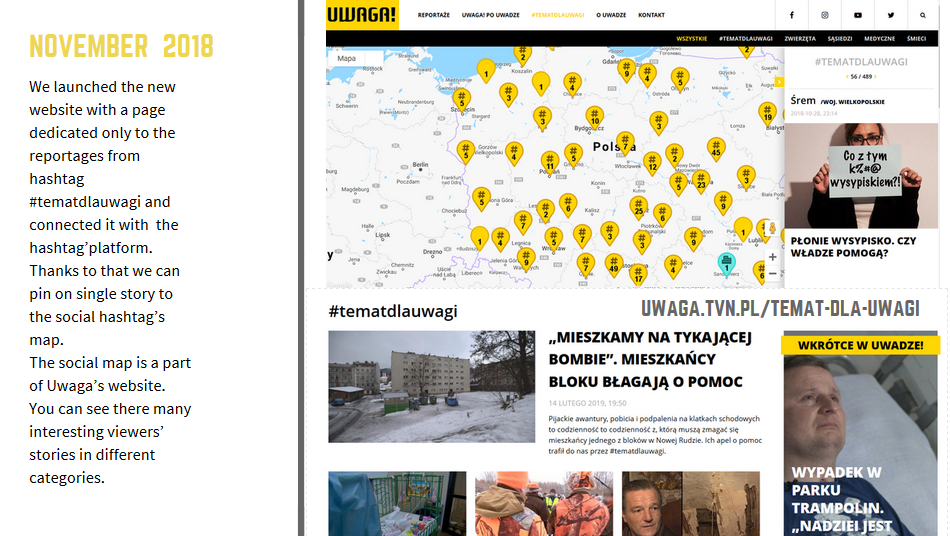 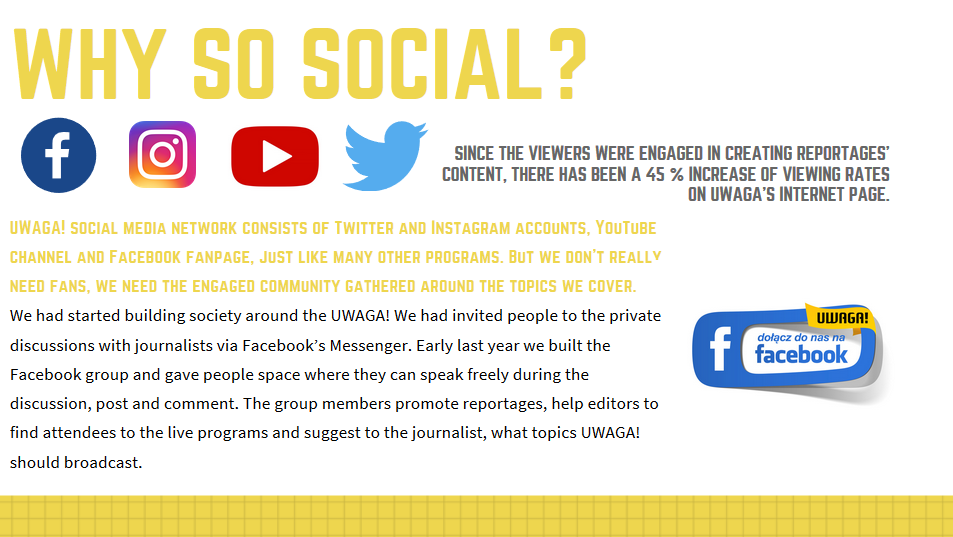 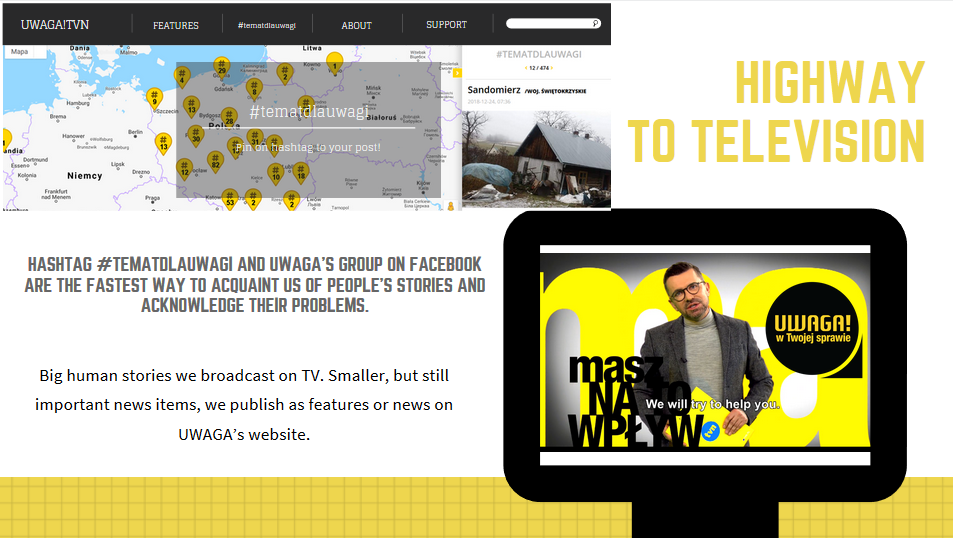 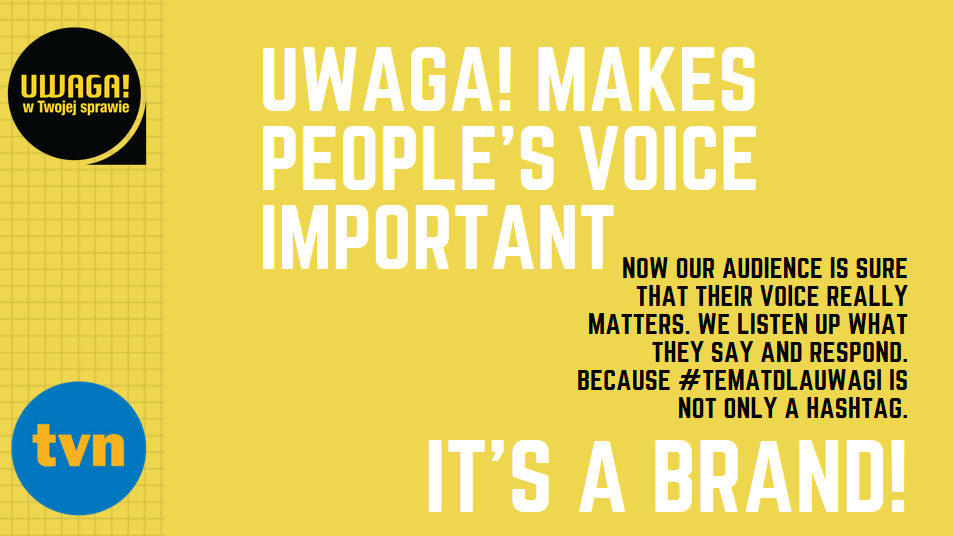