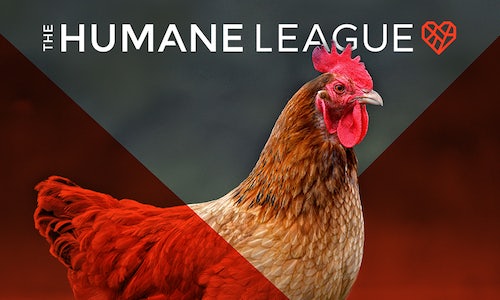 Getting to the heart of our mission

Since its founding in 2005, The Humane League has focused on effectively ending the worst abuses in factory farming by securing strong animal welfare commitments from major foodservice providers, restaurants, food manufacturers and hospitality leaders around the world; enacting legislation; and empowering people to leave animals off their plates. Over the past 14 years we have been changing the lives of billions of farm animals suffering everyday.

While we have been effective in creating a meaningful impact for animals, we were known as a ‘scrappy’ grassroots organization, with little brand authority, and a vague mission that didn’t align with our bold tone and stance.

So, in June 2018 we began a 10 month journey to BE ONE UNIFIED VOICE—stronger, together. Specifically, we set out to:

We knew that it was time to rise up, together, with our supporters. To have a shared sense of purpose. To be the change now, more than ever. With boldness. Strength. Courage. Our rebrand has made this a reality.

Within four focused months, our Communications team worked with our leadership team, staff, and supporters to develop our new branding and guidelines—known as our THL Tenets—including an updated mission statement and new tagline, a fresh logo, and more. We started by asking ourselves the hardest, most important questions to get to the heart of our mission. What is our purpose? What problem are we solving in the world? Regrounding ourselves in our “why”—our reason for existing.  Fast forwarding through these four months, we:

All of this was done in-house, with our team’s relentless spirit and less than $1,000. In doing so, we were able to leverage our experience within The Humane League and the broader animal protection movement—literally bringing heart to it all.

On October 4, 2018, we internally unveiled our emboldened mission: to end the abuse of animals raised for food.

This was coupled with a new communications approach and a new look and feel—including a new logo—to our internal team. The feedback was resoundingly euphoric.

With the support of all staff, and in preparation for our public launch, we began creating new assets across our organization—including a new website, merchandise, brochures, videos, social media content, letterhead, business cards, and much more. In just a few months, we created over 90 new assets. And, within a record three months, we created a transformative new website that we versioned out for the US, Mexico, the United Kingdom, and Japan.

True to the community-driven strategy we took to create our rebrand, we invited influential supporters to join us for an intimate photo and video shoot—sharing why their “their heart is for the animals”—followed by plant-based dinner in Los Angeles. Attendees included musician Kendall Schmidt, actress and environmentalist Mica von Turkovich, VegNews Digital Director Jasmin Singer, and cinematographer Bobby Sud, among others. At the same time, we sent out a special mailing to our major donors and personal messages to volunteers, giving them a sneak peak into our rebrand. We instantly received enthusiastic feedback, which continued to trickle in as we prepared for our public launch.

In the twelve days leading up to our launch, we began teasing our rebrand on social media and our website. During this time, we took our fans on a journey that began with “reimagining the future for the animals”, replete with a Spotify playlist, and evolving into our official “getting to the heart of our mission” rebrand. This messaging was inspired by our new “mended heart” icon—representing the broken food system being repaired through our compassionate strength and our relentless work.

With a globally aligned mission and launch plan across the United States, Mexico, the United Kingdom, and Japan, on March 26, 2019 we simultaneously “got to the heart of our mission”—taking our supporters on a shared journey. We debuted a personal video, which earned a 4.93% engagement rate. And to help enroll our supporters in our new identity, we hosted a Facebook Live—our top performing post in the month of March, earning an engagement rate of  5.32%.

Within the first week of launch we reached 711,494 people through our primary social media channels, of which over 132,000 people actively engaged with our re-branded content. On the launch day itself, we had a 1,600+ spike in organic likes on Facebook.  Through our new website, 144 people signed up to take action with us, and we immediately earned $560 in donations. Most critically, positive feedback poured in. One donor noted, “Yay new brand!!! What an exciting time to be alive. Just looking at the website now, looks great this is all very exciting!” Even the renowned, pragmatic philosopher, Peter Singer, sent our President a personal note: “I really like the look.”

This was the first globally integrated campaign we had ever created. And, the initial impact gives us confidence that our collaborative work to “get to the heart of our mission” will continue to pay off in dividends as we work together, to end the abuse of animals raised for food.

Video for Getting to the heart of our mission 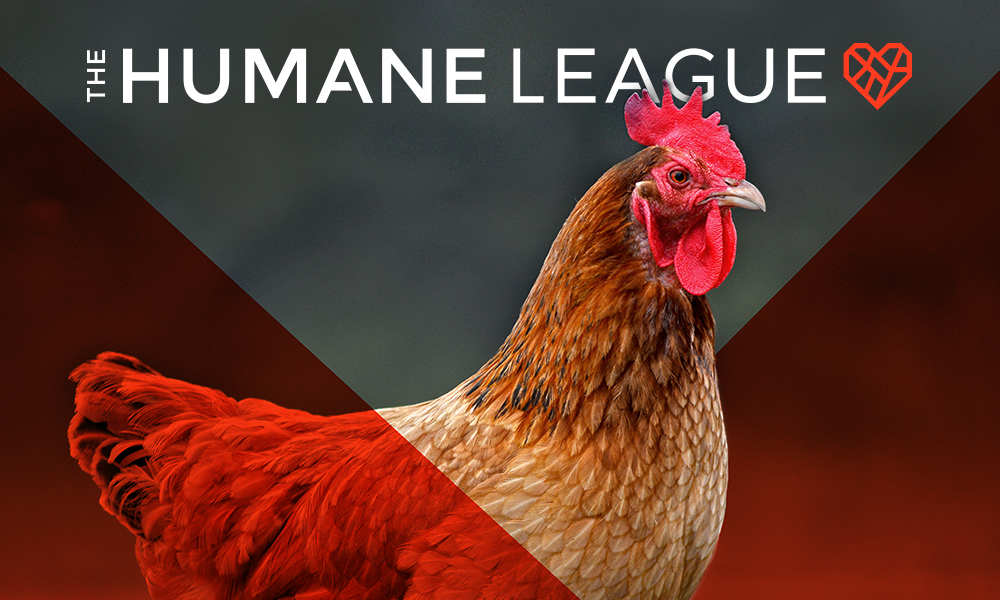 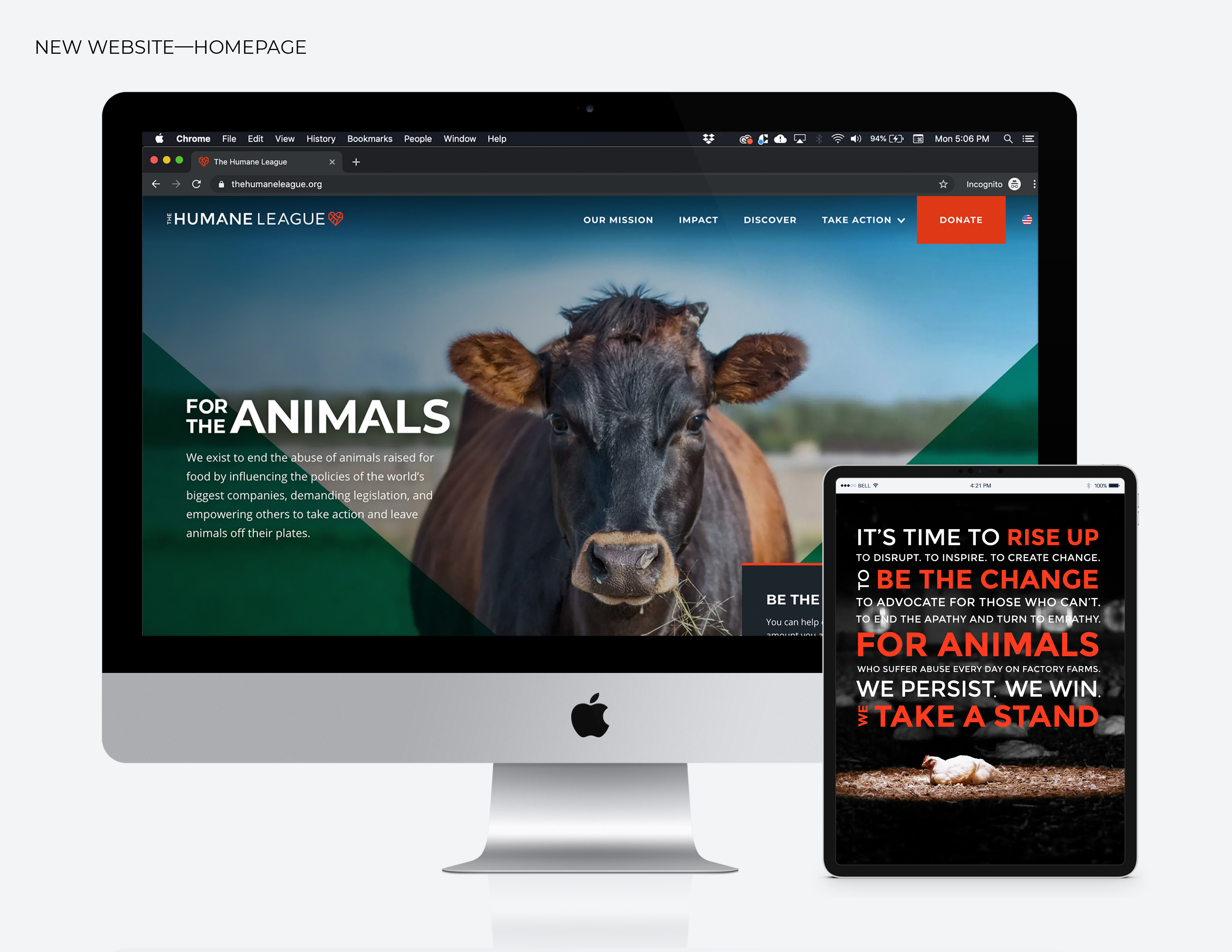 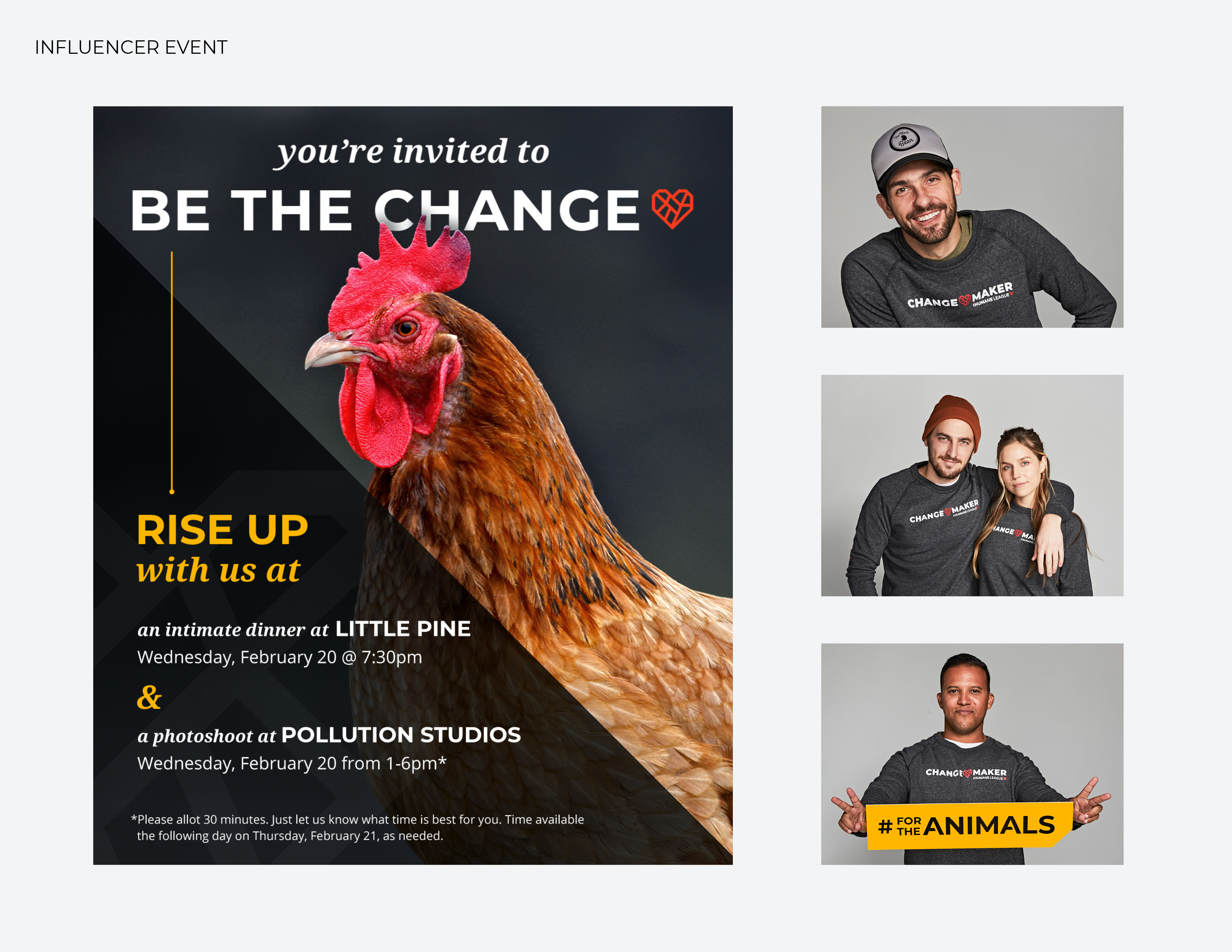 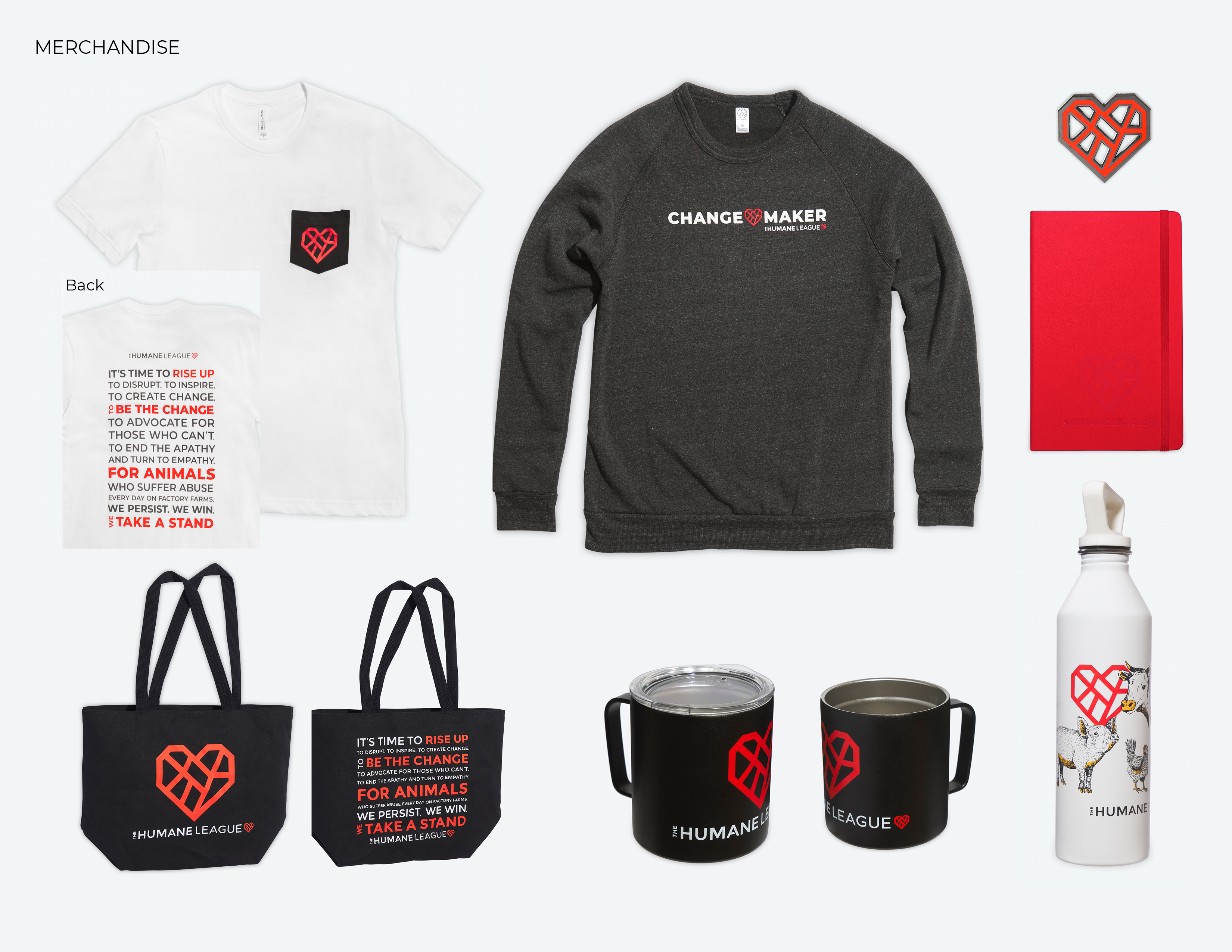 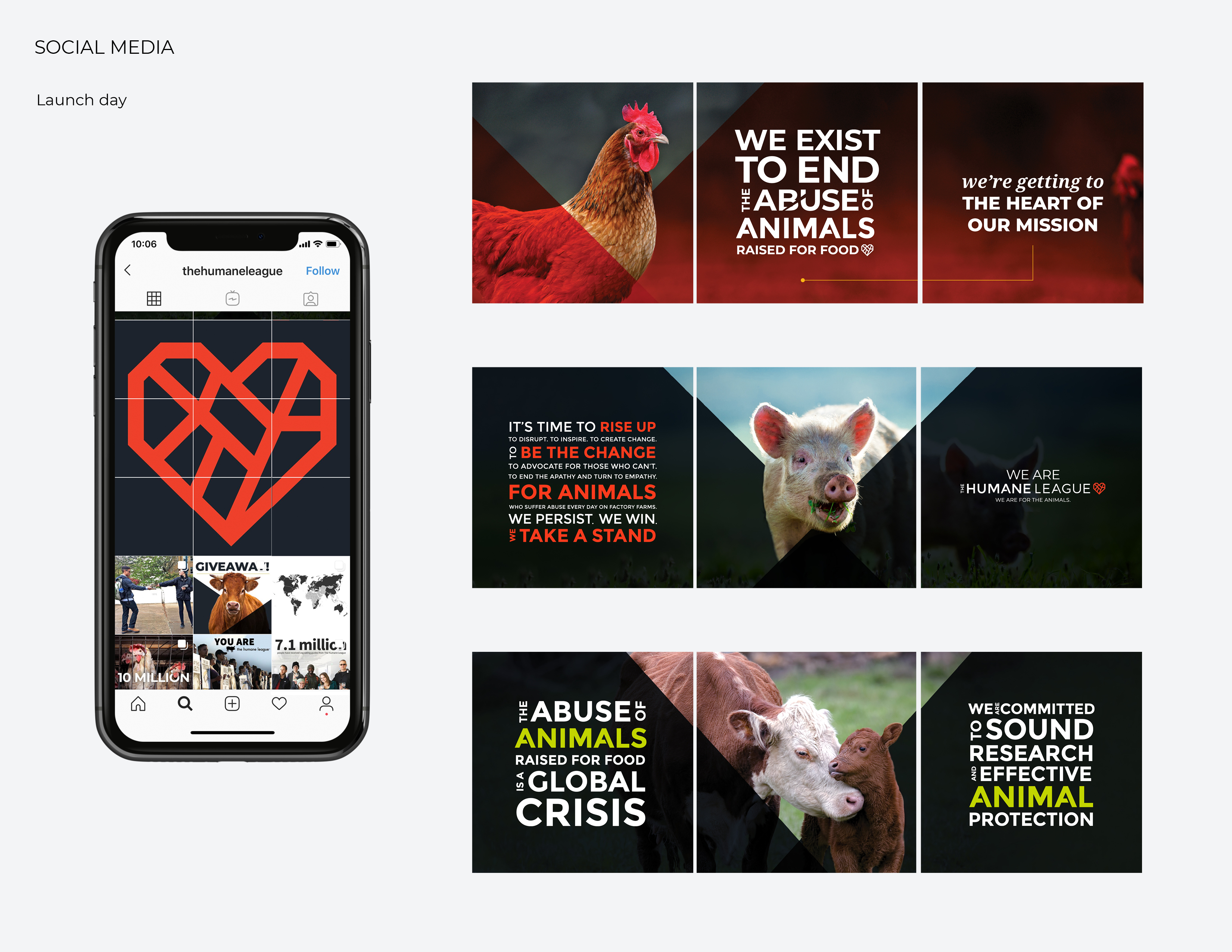 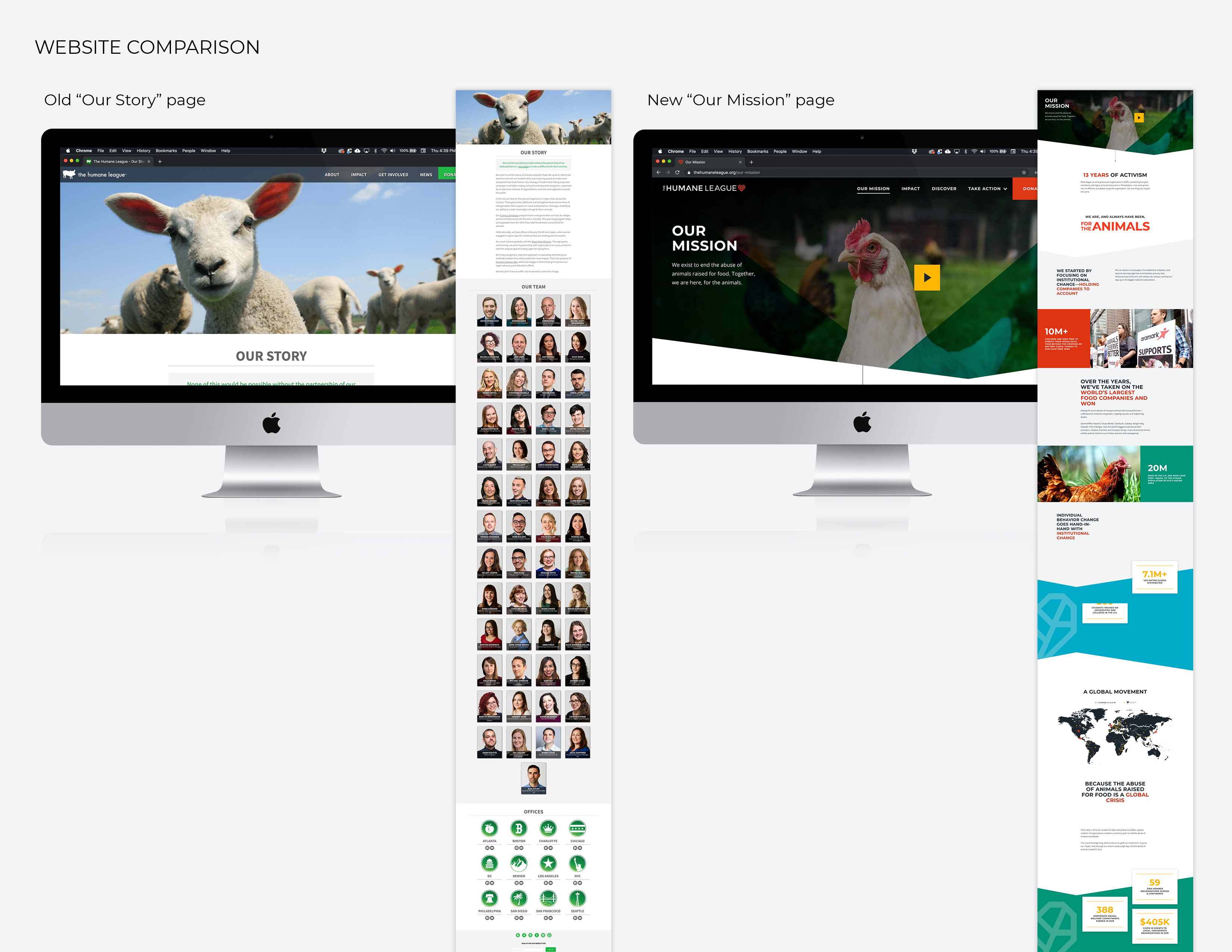 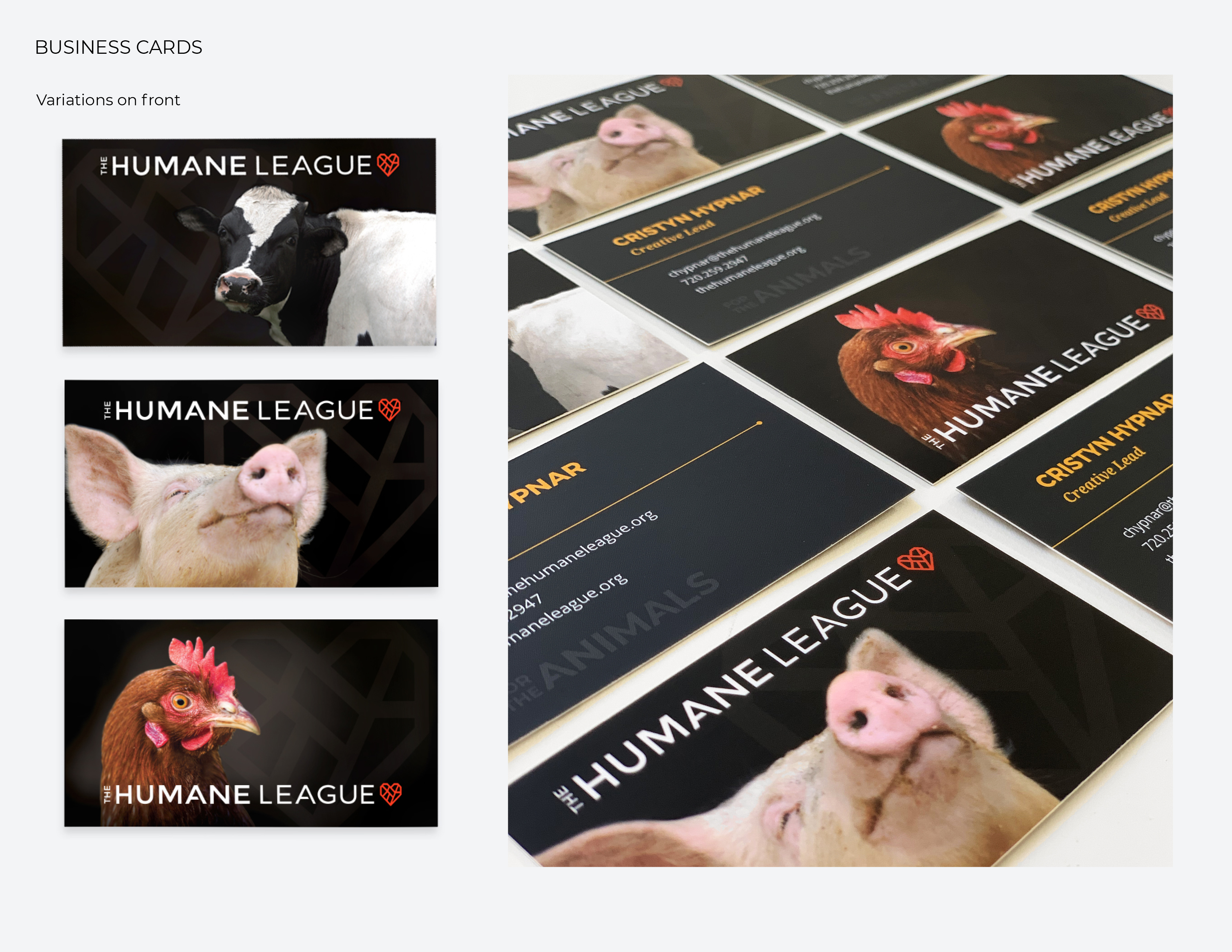 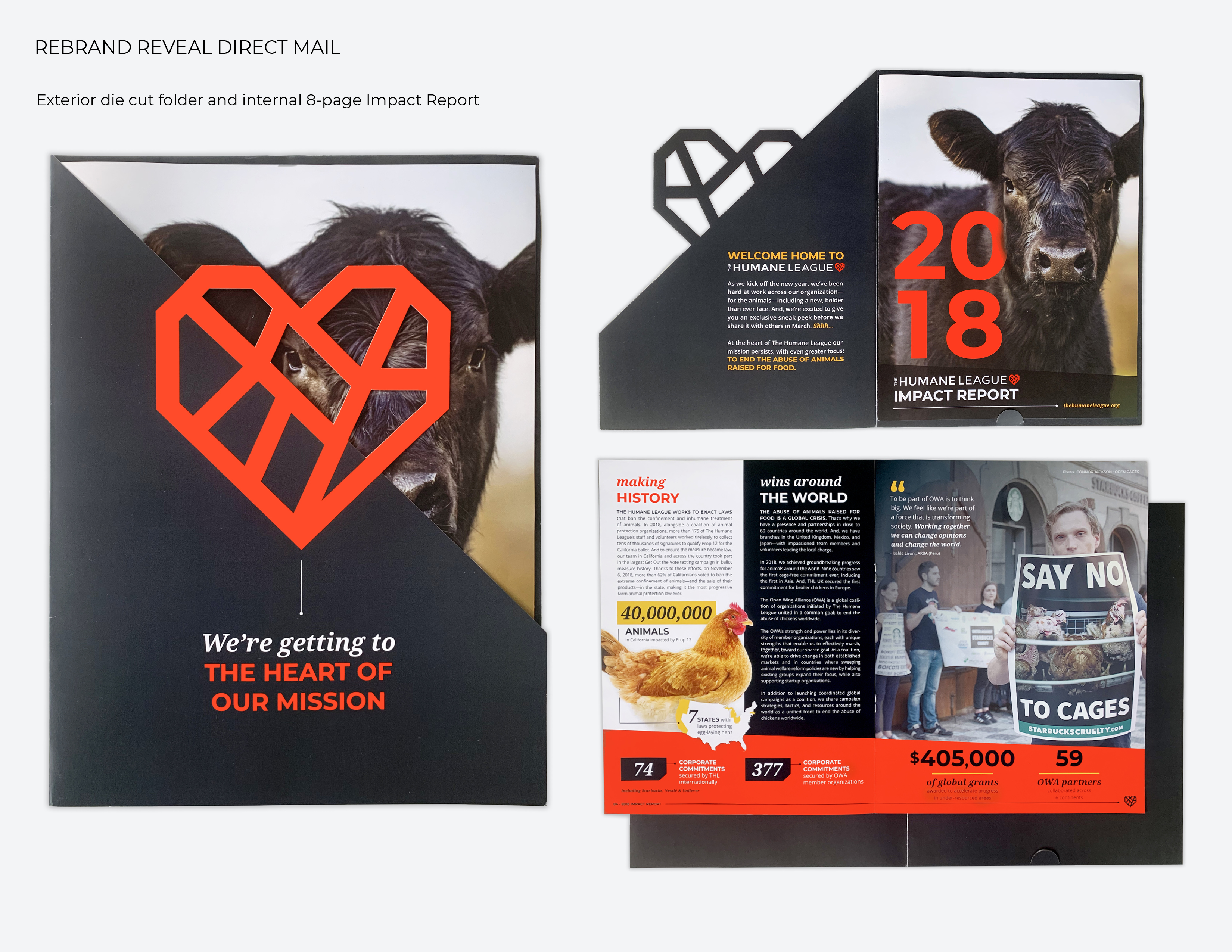 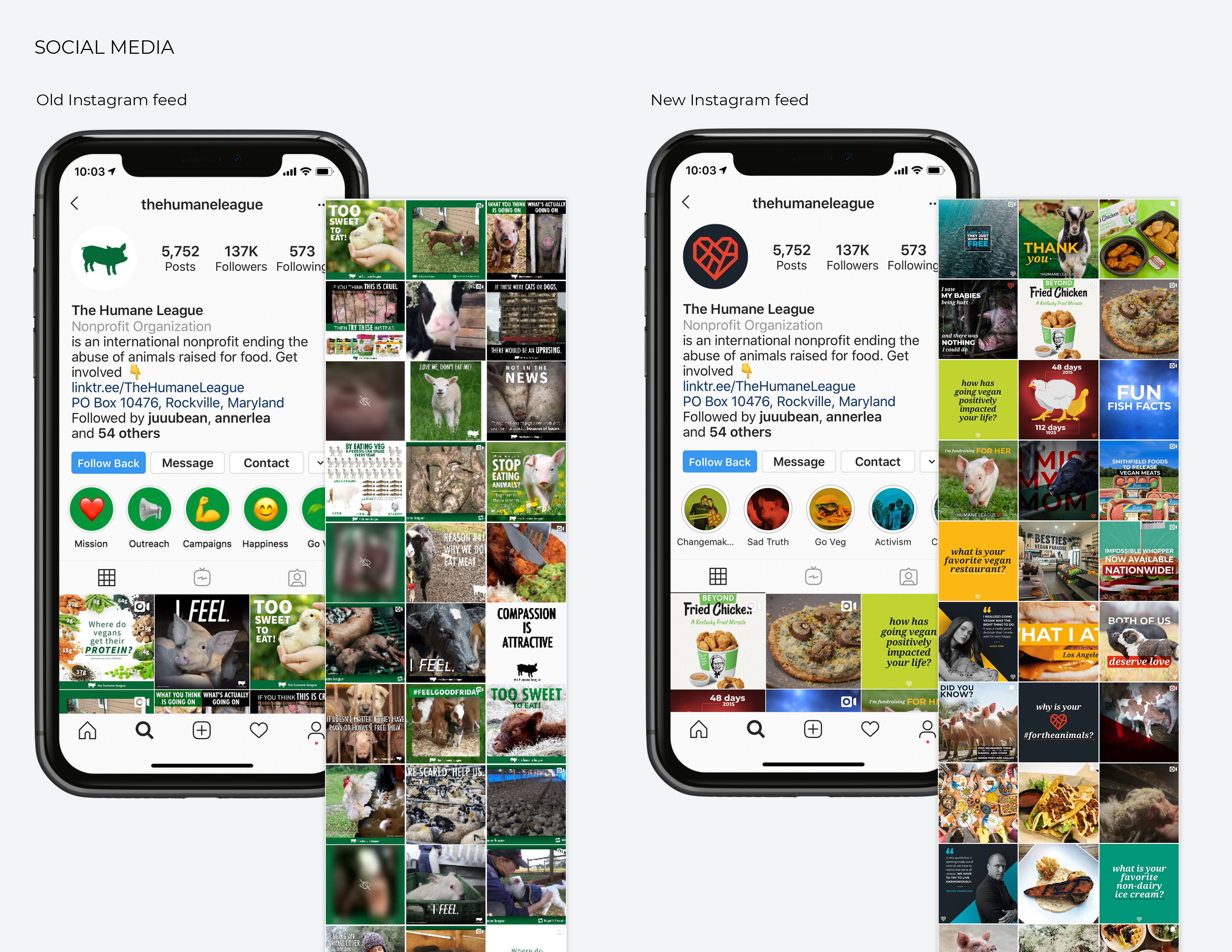