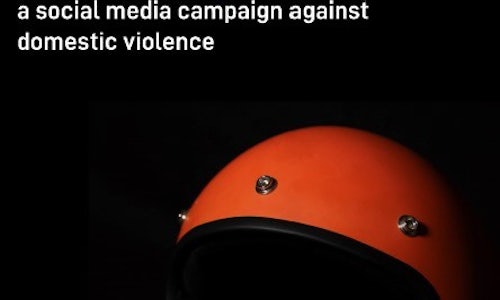 This Life Cambodia is an acclaimed, creative and effective grassroots NGO which strengthens Cambodian communities so they can lead the country's future development. Our central objective was to reduce the huge problem of domestic violence (an objective contributing to the critical United Nations Sustainable Development Goals, especially 5, 10 and 16) but we faced three challenges.

The first was cultural. Over 20% of Cambodian women experience domestic violence, but just 24% seek help, 40% because they consider it "normal". Worse, just 8% of Cambodians know there's a 2005 law to protect women and children from violence... including the police. Social attitudes underly this: until recently, the “Chbab Srey” (“Women’s Law”) taught subservience to husbands in schools. We needed to replace memories of the old Women's Law with knowledge of the newer Domestic Violence Law.

The second challenge was competitive: cutting through other NGO's noise. Cambodia has the second highest number of NGOs globally, many of which have long flooded  the marketplace with a "loudhailer" approach to campaigning, broadcasting blunt messages through posters, adverts and events without truly engaging. Consequently, many Cambodians tune out traditional NGO campaigning.

Our third challenge was financial: our budget was $4,000.

1) develop a campaign creative and powerful enough to grab attention on a mass, national scale to change social attitudes

3) create a set of resources of immediate use to women facing violence and needing legal information or support.

We believed the recent explosive growth of social media in Cambodia was an opportunity to meet all three challenges.

According to Hootsuite’s “We Are Social” research in January 2019, 8.4 million Cambodians are now social media users, a growth of 20% on the previous year. This exceeds 50% of the population, reaching even the most rural communities. Remarkably, research by Lotus Media found that 79% of Cambodian Facebook users believe it “empowers me to support causes I care about”, compared to 53% globally. We believed TLC's credibility from a decade of grassroots experience working with domestic violence survivors, coupled with creative use of social media to engage Cambodians eager to help their country develop, could catalyse real change.

We took an instantly identifiable and iconic national object - the crash helmet, ubiquitous in Cambodia where motorbikes vastly outnumber cars - then subverted expectations. We created an alternate universe where women and children didn't wear helmets outside to protect themselves from road accidents, but wore them inside their homes to protect from violence. Clearly this was a fantastical scenario and such protection isn't really practical, so our campaign then demonstrated that the real way to protect yourself and those you love is knowledge of the law. All campaign materials drove people to a one stop campaign website full of legal and support resources, including the video, the first ever audio version of the law for women who cannot read, an easy read version of the law and links to support services.

Our flagship was a 2 minute online film (https://www.youtube.com/watch?v=LfdMjtJDE38), visually beautiful and scripted to puzzle and intrigue before revealing its message. The film showed four very different women entering very different homes, but first putting on their helmet. In the final frames a celebrity voiceover pressed home our campaign message about the need to know the law and seek help.

To carry the message to as many target audiences as possible we recruited influential Cambodians with very different fanbases to voluntarily record video or photographic messages of support alongside our newly iconic orange helmet. These included feminist social media star Catherine Harry (recently profiled in Time and Forbes magazines for her pioneering ), actresses with older fanbases (Yan Linda) and singers with young fanbases (Nikki Nikki). One famous participant experienced violence in her own marriage – this was her first time speaking out publicly, creating enormous impact amongst the Cambodian public.

We rolled out 35 posts over 16 days, starting with our film and climaxing with our famous survivor of violence's video message. Other elements launched to maintain momentum included:

The campaign was run by two staff for under $4,000. Results exceeded targets, usually by a factor of ten or more:

• Film viewed by over 1 million Cambodians (target: 100,000)
• More than 257,469 people engaged with the campaign across Facebook, Instagram, YouTube and Twitter (target: 20,000)
• Over 13,000 unique visitors went to campaign page to access legal advice/resources. (target: 2,000)
• On Facebook alone, campaign was shared over 9,000 times
• The campaign reached just under 4 million– over 20% of the population
• Facebook helmet frame and downloadable digital helmet were shared or downloaded more than 2,500 times.

All of this activity led to greatly increased awareness of the law, confirmed by feedback gathered from the community (to be formalised later this year through independent research). We received messages publicly and privately from victims of violence saying they'd been inspired to take action. Our campaign materials were so effective that other NGOs and the Government requested to use them in events/campaigns of their own, and the film was shared globally.

The campaign was such a viral phenomenon that it received a major feature in Cambodia’s leading newspaper the Phnom Penh Post (headline: "NGO's domestic violence video viewed by 1 million"), as well as several features in the most popular news website, Sabay News.

Our profile and reputation grew significantly as a result of the coverage and campaign. Our Facebook following grew by over 10% in 18 days, providing an even more powerful base for future campaigning/fundraising.

Video for End Violence Together 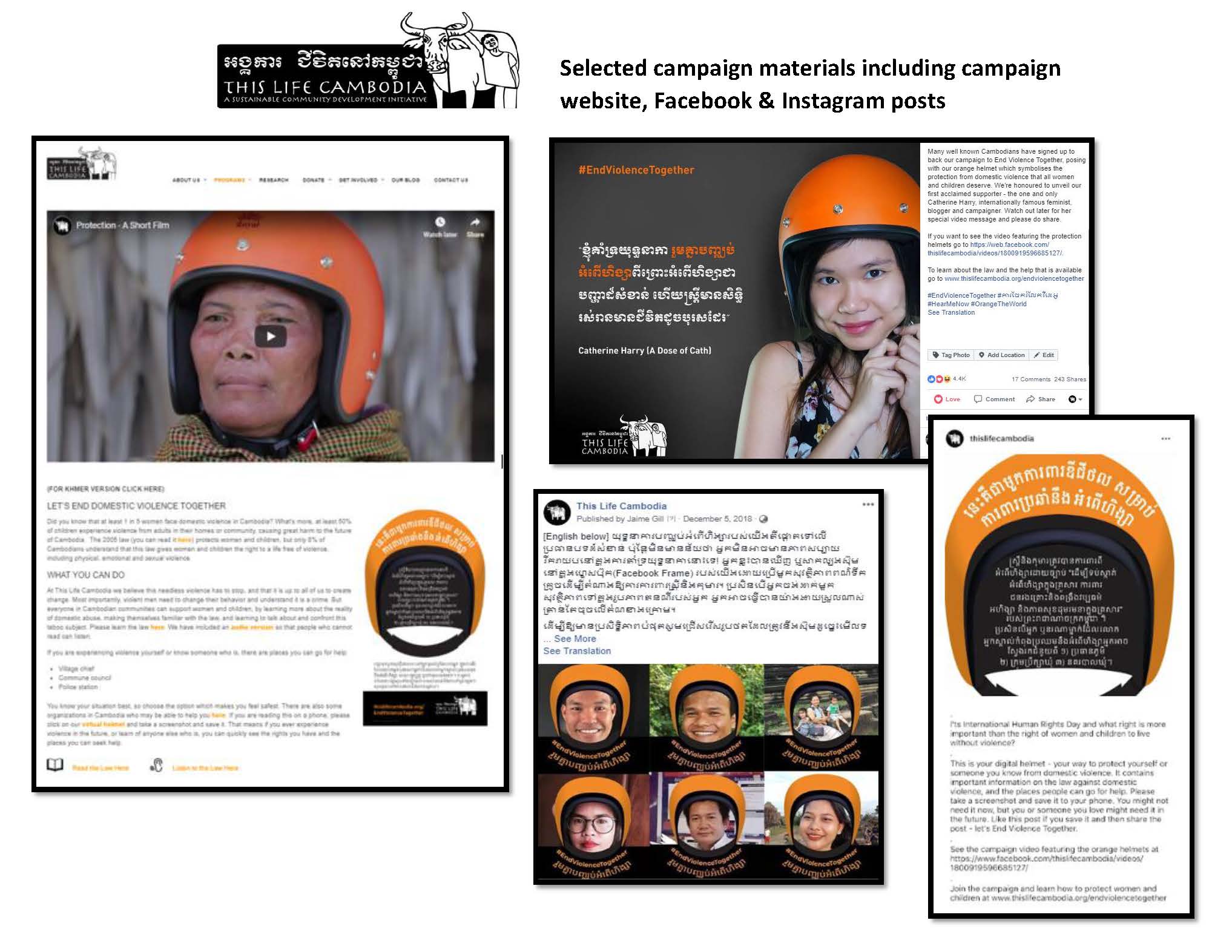 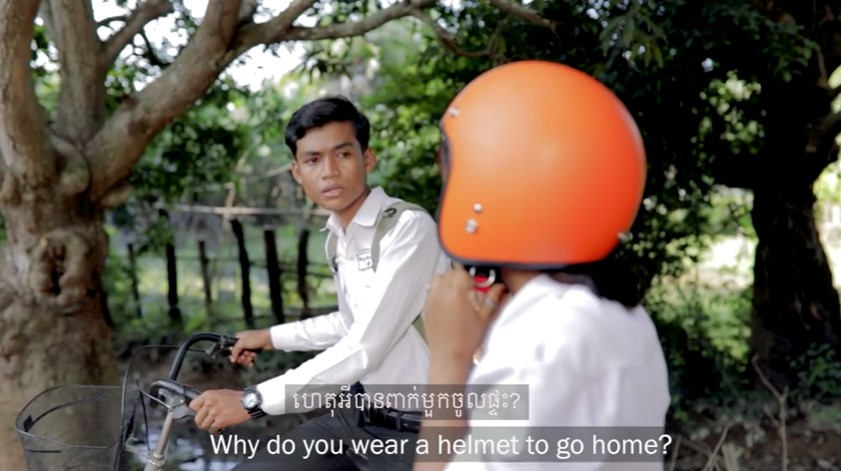 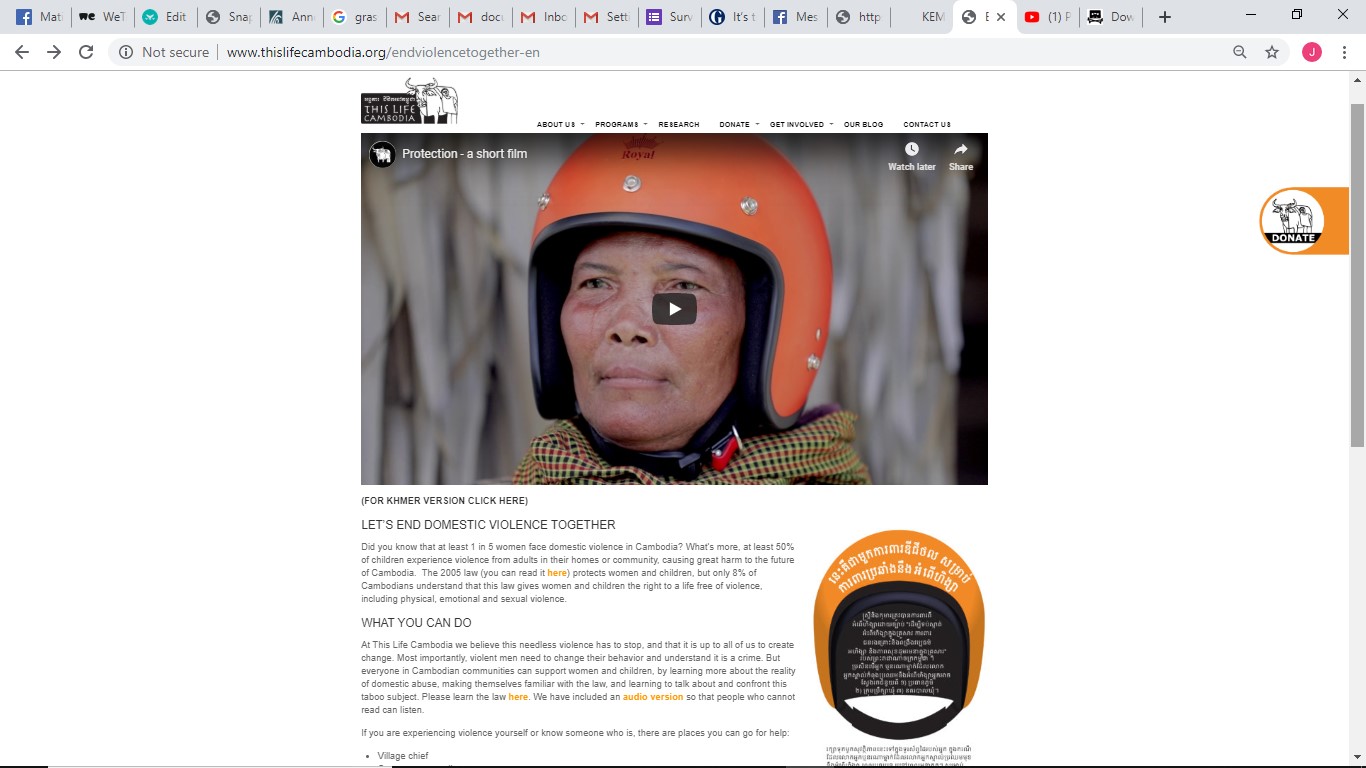 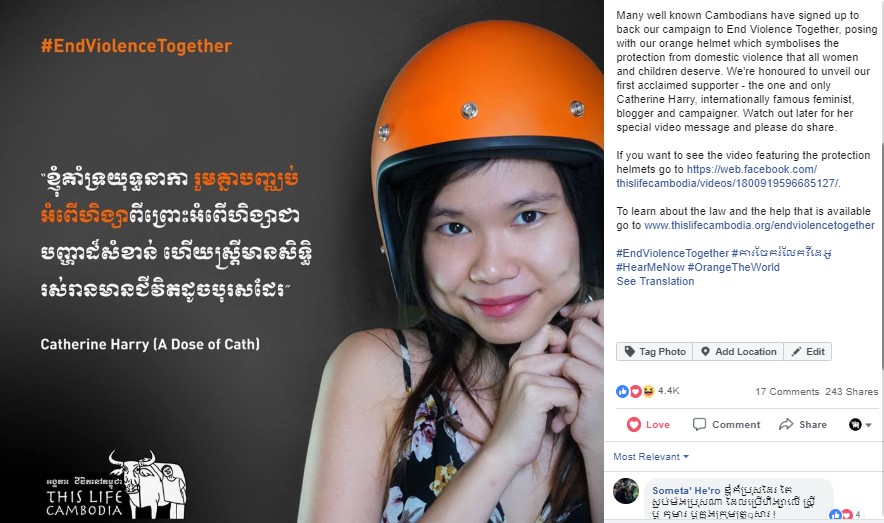 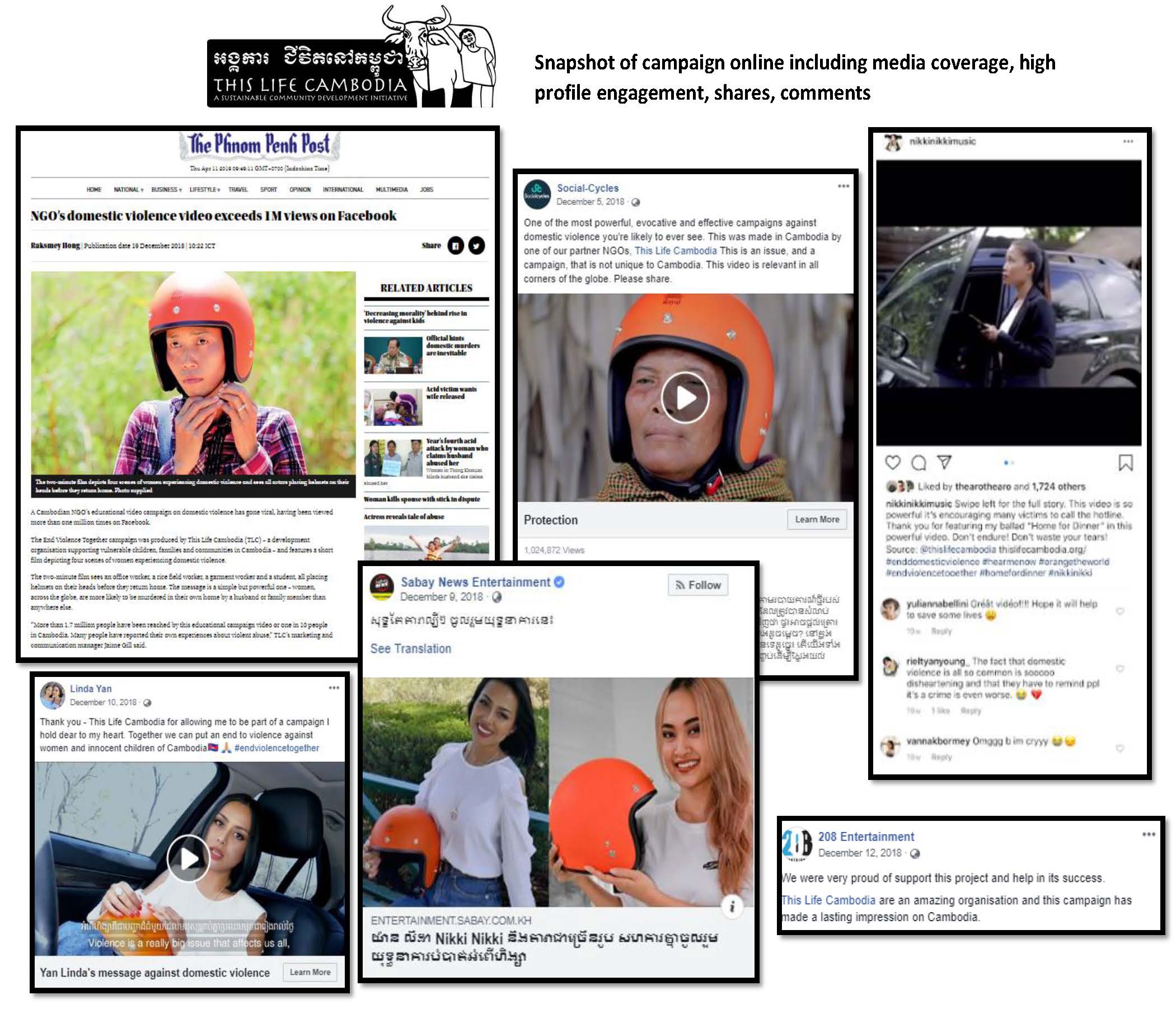 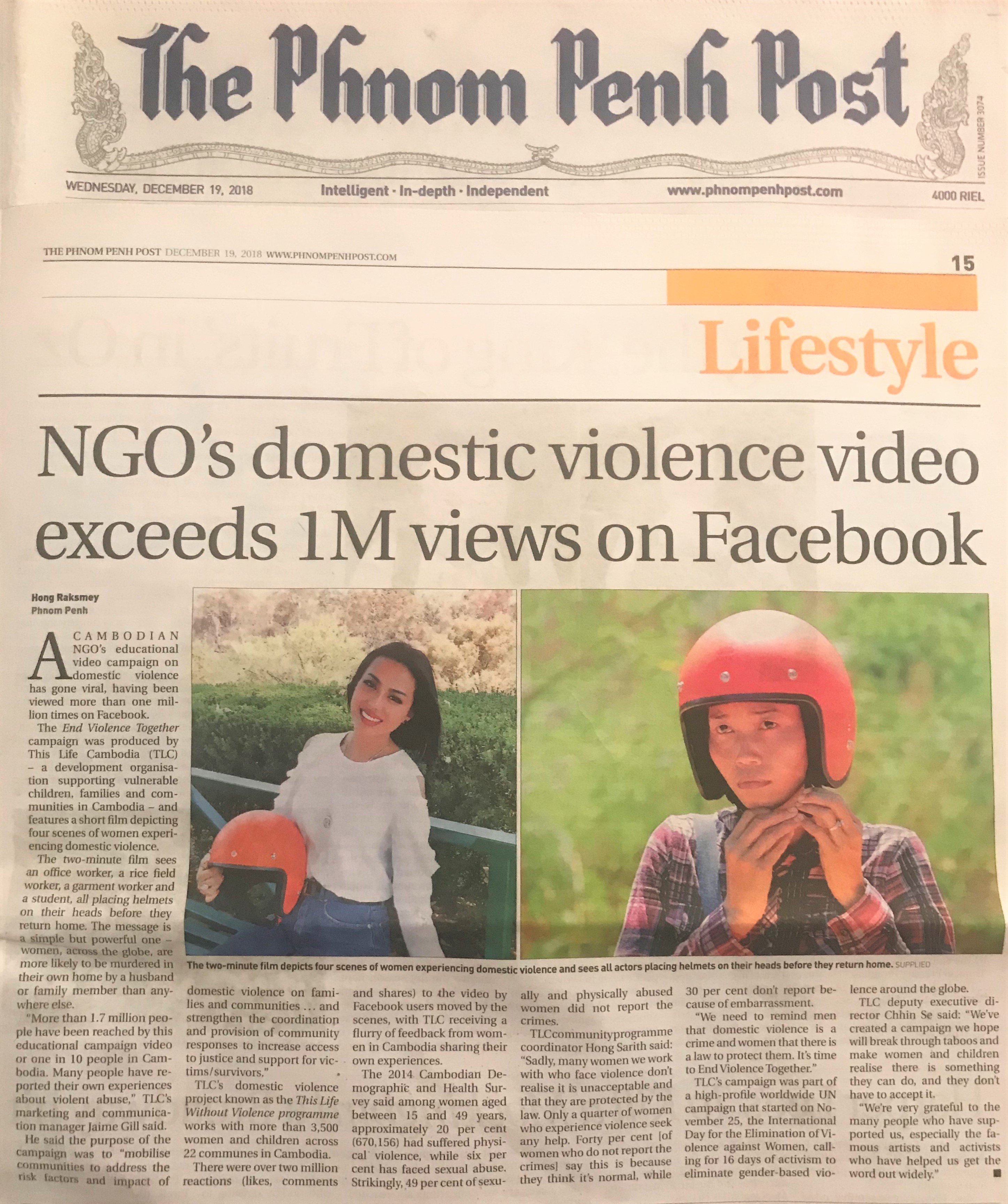 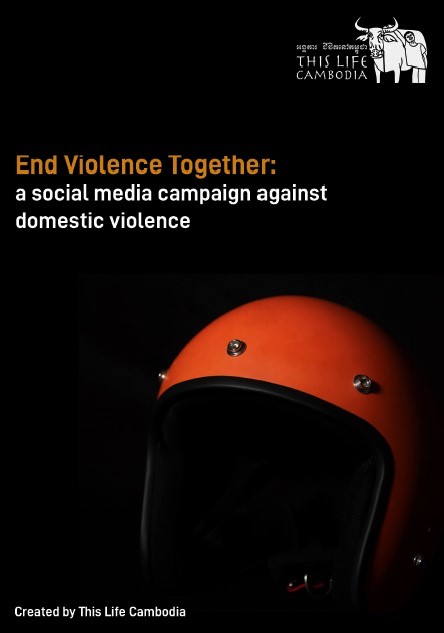