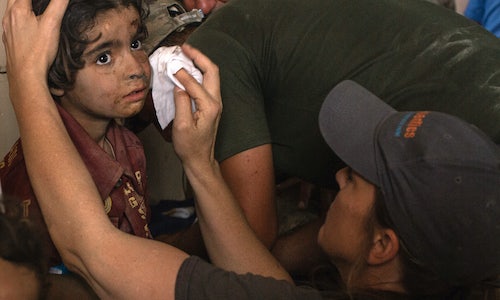 Dispatches from the Field

In December 2016, the World Health Organization (WHO) made an urgent request for assistance in Mosul, Iraq. The country was in the middle of an intense war and there was very little trauma care available to help those injured during the conflict. Many of the Northern Iraq hospitals were non-functioning or under ISIS control, and left thousands of people without health services. As the front line moved forward more hospitals were damaged beyond repair. Ambulances were hard to come by and if someone was lucky enough to be transported, the nearest medical facility was often several hours away due to damaged roads and multiple security checkpoints; no medical care was provided enroute.

People were dying and many of their deaths were preventable. They would die simply because they did not have access to the care necessary to keep them alive in the field and during transport to the hospital. In the first two months alone more than 2,000 civilian casualties were reported and 10% of them were children under the age of 15. We could not stand by while people, children, died because they did not have access to medical care.

NYCMedics' model of mobile medical teams would perfectly address the gap in care caused by a constantly moving frontline, so we immediately answered the WHO's request and began the implementation of a year-long intervention operating a Trauma Stabilization Point, aiming to deliver high impact with measurable results.

Our goal was simple, to save as many lives as possible.

Throughout 2017, NYCMedics operated a Trauma Stabilization Point (TSP) behind the front line of the war filling a critical gap in the response efforts. TSPs were the first point of medical contact with gravely injured people providing vital trauma care and stabilization, readying patients for transport to hospitals for medical or surgical intervention.

The NYCMedics TSP was continually staffed and operated 24 hours a day, seven days a week. As a mobile unit, our TSP relocated seven times in effort to maintain a close proximity to the front and intervene during the critical 'Golden Hour" of care providing rapid evaluation and resuscitation. The majority of patients were evaluated, triaged, treated, and dispositioned to receiving facilities within 15 minutes of arriving. With NYCMedics TSP located between the front lines and the distant field hospitals, our volunteers provided life-saving care to more than 2,600 patients, far exceeding our projection of 2,000.

Additionally, NYCMedics successfully implemented and directed a response wide patient referral system that managed over 1,600 patient transfers in real-time. NYCMedics played an integral part in the day-to-day management of patient transfers, helping to smooth the communication between various partner organizations, troubleshoot delays and obstacles during transfers such as border closures and ambulance availability in real-time, and served as a centralized focal point for referrals.

From our first day on the ground in Iraq we posted Dispatches from the Field to allow people to see and hear firsthand from our volunteers and staff on the front lines. While our organizational mission was simple, to save as many lives as possible, our campaign objective was to share our experiences far and wide in effort to garner media attention for the crisis in Iraq as well as to increase awareness of our brand and mission. Strengthening our brand awareness would not only help us raise additional funding to contribute to our life-saving medical interventions, but also reach qualified medical volunteers far beyond the borders of the U.S.

Within weeks of our first post we were approached by CNN, CBS, NPR and the Los Angeles Times, as well as dozens of smaller, local US, Middle Eastern and European news outlets. Granting access to our TSP allowed major news networks to share our story and the need to help with the humanitarian crisis in Iraq. After the news features were published, we saw a spike in in our social engagement, donations and volunteer recruitment.

Following the success of this project, NYC Medics has been at the forefront of challenging traditional responses to war and are currently working toward providing similar interventions in Yemen. Additionally, we are also working towards implementing other projects in Iraq that focus on resiliency and redevelopment of emergency medical services in Mosul.

Video for Dispatches from the Field 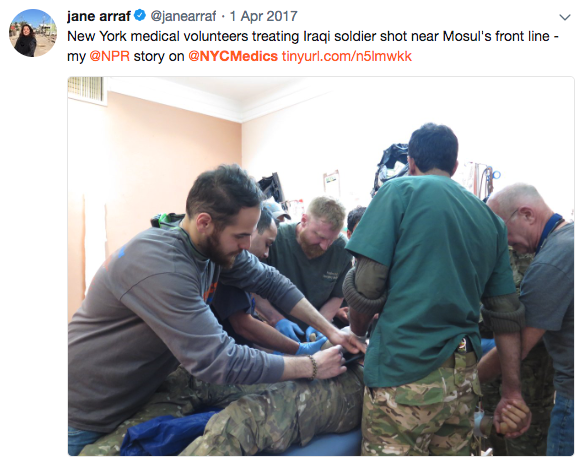 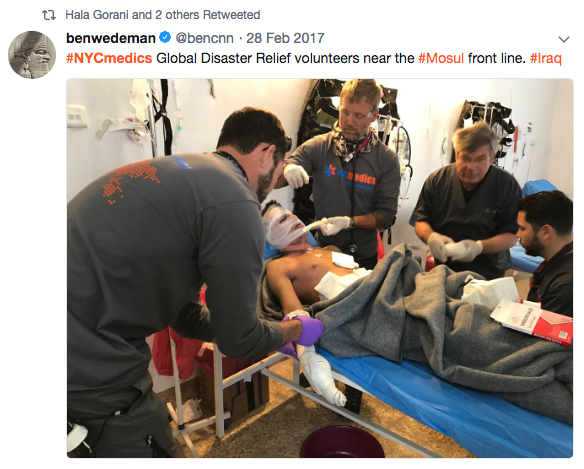 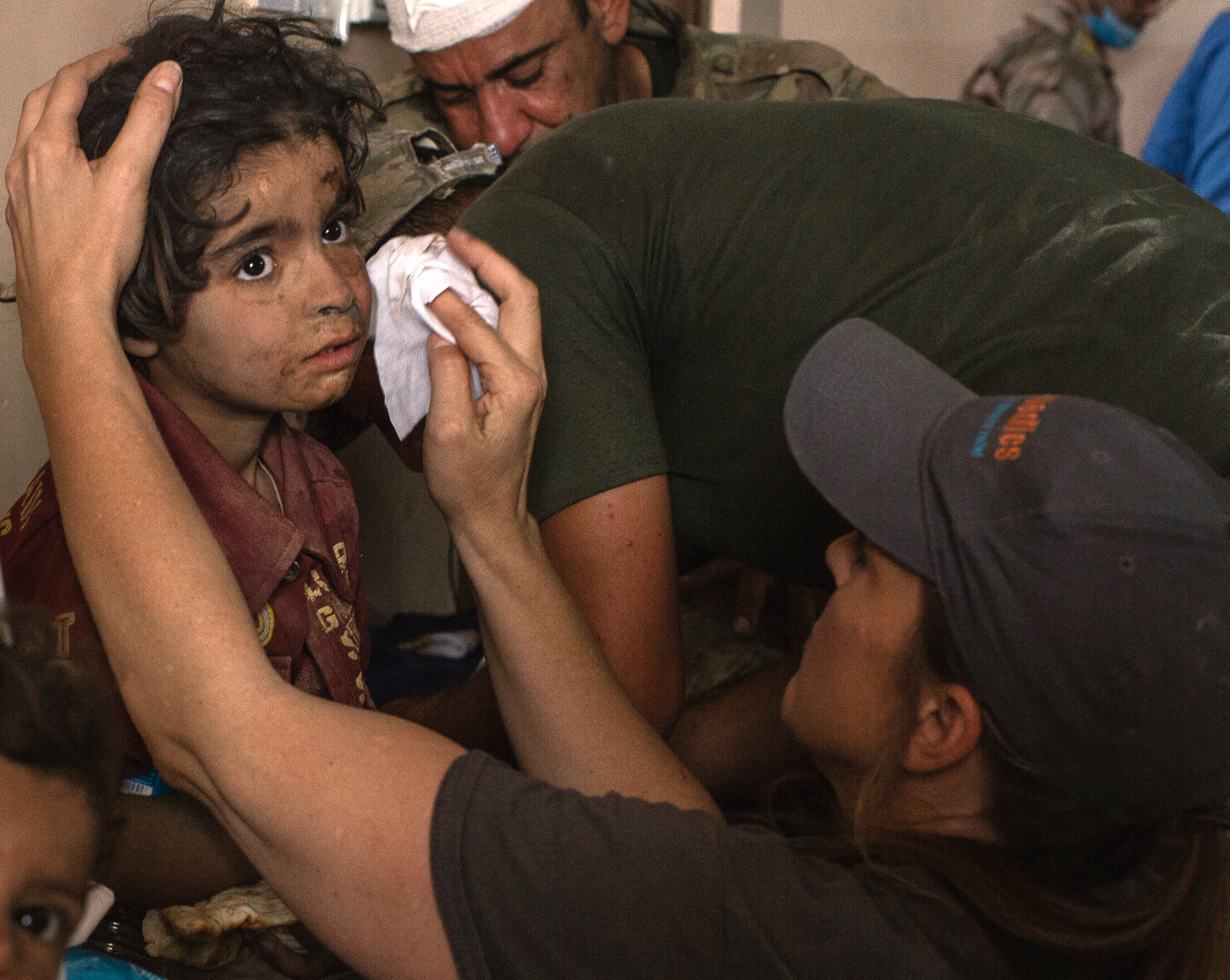 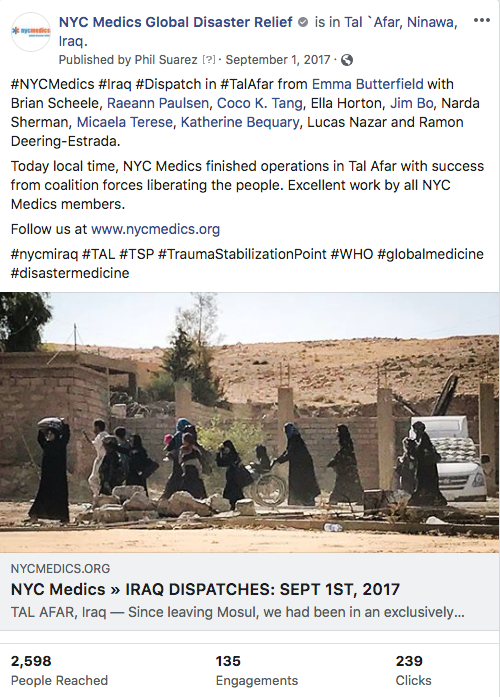 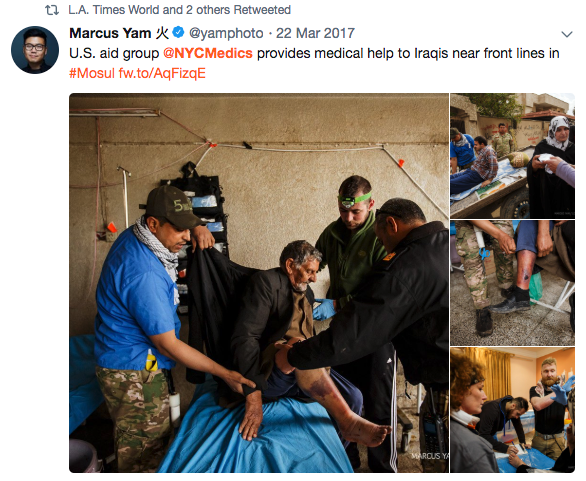