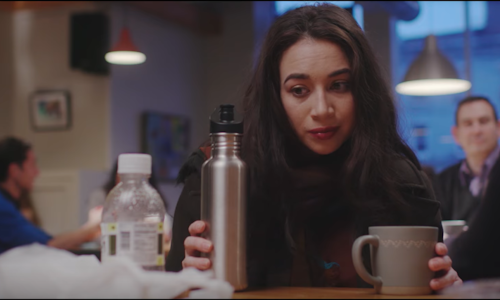 It's not me, it's you: #CleanSeas break-up PSA

In 2015 alone, we produce 320 million tons of plastic-- the equivalent of 900 Empire State Buildings. The production of plastic uses ample amounts of nonrenewable, toxic substances, and annually at least 8 million tons of it leaks into the ocean where it can have serious implications for wildlife and marine ecosystems. UN Environment wanted to create a comedic and engaging PSA as part of the Clean Seas campaign to encourage people around the world to reduce their consumption of single-use plastics. Whereas other organizations have approached the issue with a serious tone, UN Environment hoped to reach a new demographic of people who might resonate with a comedic concept. In a unique spin on the rom-com trope, UN Environment decided on the "break up with plastic" concept and engaged Footage Films to develop it into a fully-executed spot entitled "It's not me, it's you."

Our strategy was to create a dynamic, funny, and engaging spoof on the romantic comedy genre – we wanted to create something that would be humorous and clever in any language, and work cross-culturally around the globe. In order to achieve this, we focused on writing scenarios that people worldwide would be able to relate to, like soccer, driving, shaving, and eating, and also created international elements to the story in multiple UN languages in order to engage global viewers even further. At the same time, we wanted to educate viewers about the dangers of single-use plastic pollution and engage them in being part of the solution. For that reason, the PSA has a hopeful ending, to demonstrate that each individual person can make a real and meaningful impact in the fight against plastic pollution. What makes this work unique is the clever interweaving of storytelling in a popular genre, with education of a demographic who may not have already been engaged with this issue.

"It's not me, it's you" was strategically released on February 14th, St. Valentine's Day, on UN Environment's online channels including YouTube and Facebook. Its refreshing take on the single-use plastics issues and solutions quickly led to 2M online views and 23k shares on Facebook alone. The video was subsequently picked up by international online and traditional broadcast media, leading to to a spike on the cleanseas.org website and generating online pledges to reduce single-use plastic consumption.

Video for It's not me, it's you: #CleanSeas break-up PSA

UN Environment and Footage Films with support from PCI Media