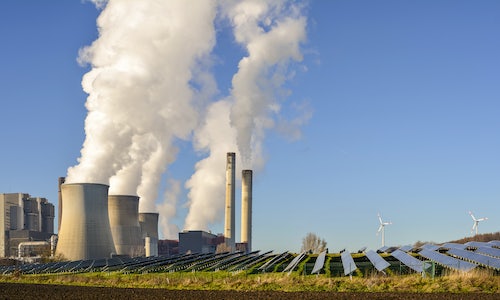 Client WattTime—based in Oakland, CA—is a technology-centric nonprofit that looks and operates more like a Silicon Valley software startup than a traditional, philanthropically supported nonprofit. Using Big Data, special computer algorithms, machine learning, and behavorial science, WattTme has developed truly unique advisory capabilities and software solutions for reducing the electricity grid's carbon emissions and other emissions that harm climate, environment, and human health. They are highly respected among industry stakeholders that know them well, but overall brand awareness and recognition could be stronger, supporting business development and generating positive impact in alignment with their mission.

In particular, our objective was to build recognition for WattTime's consulting practice aimed at corporate renewable energy buyers, electric utilities, and renewable energy developers (i.e., solar and wind developers). Yet as a small, young nonprofit, WattTime's overall budget is small, so we needed to adopt an approach that didn't rely on large paid content and ad campaigns and other such high-dollar tactics. We needed a low-cost approach that could return big dividends for the WattTime brand.

'Additionality' is a good and important criterion, but one that also makes a flawed assumption: it treats all renewable projects as equally good, because they are each zero-emissions sources of electricity generation. In practice, that's not entirely true. Which is where client WattTime's consulting practice comes in.

Our strategy was threefold: a) introduce a new, compelling, memorable term to the industry that embodied the key concept and the WattTime brand, b) gain traction for that term through blog posts and other market commentary articles, and c) demonstrate the huge potential impact by connecting the term to major items in the industry news cycle.

A. In collaboration with the WattTime team, we conceived the term 'emissionality' to embody this idea of the avoided emissions a renewable energy project achieves. It has the same number of syllables and other parallels to the term 'additionality,' which is already well-established and provides a relevant anchor for advancing industry discussion and juxtaposing the two concepts to highlight WattTime's differentiated solution.From the outset, the term 'emissionality' proved very sticky and resonant among target audiences.

B. Next we wrote a series of blog posts / articles introducing and explaining the 'emissionality' term to the industry. We began with a debut article, "From Additionality to 'Emissionality': How Companies Can Magnify Their Impact". We continued with an ongoing editorial series, with articles placed both on WattTime's native content blog on its website as well as placed in a number of industry trade publications.

C. Finally, whenever and wherever possible, we tied the 'emissionality' concept to major items in the news cycle, highlighting both emissionality's relevance and also its huge potential positive impact. For example, when the current White House administration announced a new policy that harmed the domestic solar industry and depressed the solar market, we wrote an op-ed showing how applying an 'emissionality' analysis could generate enough additional positive impact to fully offset the negative impact of the Trump administration policy.

Our three-pronged approach has proven quite successful for WattTime. From the outset, the term 'emissionality' has proven very sticky and resonant among target audiences, helping to elevate the WattTime brand and 'own' a piece of thought leadership that is advancing industry discussions. We have successfully placed a number of articles in the industry's leading publications, such as Greenbiz, Smart Energy Decisions, and Renewable Energy World, thus reaching a high percentage of WattTime's target audience. And WattTime's business development, partnership, and grant-funded philanthropic efforts have accelerated, in part through the elevated brand recognition and awareness and heightened demand the campaign has generated.