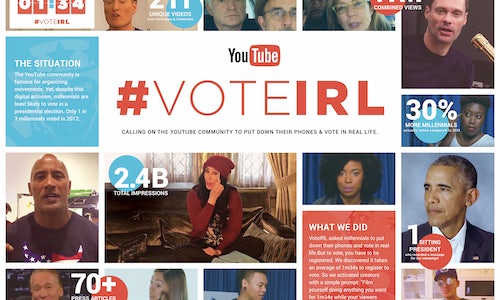 The YouTube community is famous for organizing movements, commenting, liking, and disliking. Yet, despite this digital activism, they're the least likely demographic to vote. VoteIRL asked millennials to put down their phones and vote in real life. But to vote, you have to be registered. We discovered it takes an average of 1m34s to register to vote.

So rather than feed scripts to celebrities, we focused on building entertaining prompts and creative tools for the YouTube community to create empowering messages themselves. We activated creators with a simple prompt: "Film yourself doing anything you want for 1m34s while your viewers register to vote." Over 211 videos were created by YouTubers and celebrities including The Rock and Conan, earning 7M total views. As a final push we recorded a special video with President Obama, urging our community to get out and vote in real life.

To define YouTube's unique role in driving young voter turnout, we looked for insights in three key areas: the YouTube community, the elections landscape, and cultural trends. We saw that there were already YouTubers, with thousands to millions of young fans, who deeply cared about the elections. Given the increasingly negative tone of the elections season, we saw an opportunity to empower those YouTubers and use them as catalysts to spark turnout in a positive way.

Through social listening we found a +34% MoM increase in negativity & voter fatigue in months before election, creating an opportunity for a more lighthearted voting message. Along with that, adding a social challenge call-to-action, we could create a sense of urgency and action.

Utilizing influential YouTubers and celebrities we developed a light-hearted, challenge-oriented message during two key moments: National Registration Day and Election Day to create a movement that socialized the vote.

This was YouTube's most successful direct-to-creator video prompt ever, over 211 top YouTubers and celebrities participated (Cher, Ryan Seacrest, The Rock, Conan, Chainsmokers). We successfully activated creators with our open prompt, instead of a typical scripted PSA. The #voteIRL videos on YouTube received over 7M combined views.

We generated 24k social mentions and 2.4B total organic impressions, with over 43% of our impressions came from our target demographic (18-24 yr olds).

While the outcome of the U.S. election was...surprising, more millennials registered & voted than ever before. Our campaign shortlink (http://g.co/elections/134) alone drove 2M clicks through to online registration tools. In 2016, a record breaking 83% of millennials were registered to vote and 30% more millennials actually voted compared to 2012. And they'll still be registered in 2020 :)

We had 70+ press stories including Teen Vogue, Mashable, and The View (2.7M viewers). 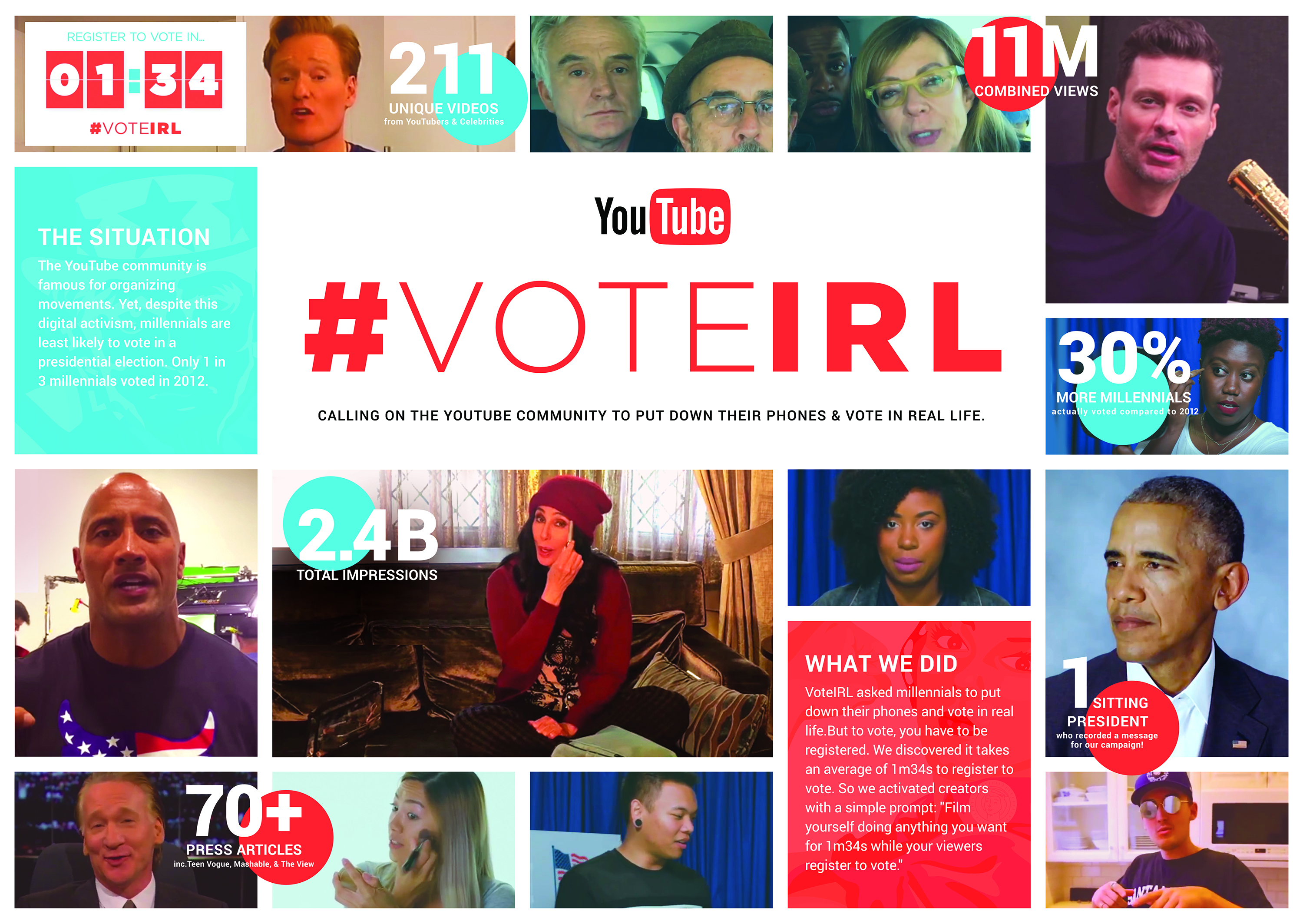