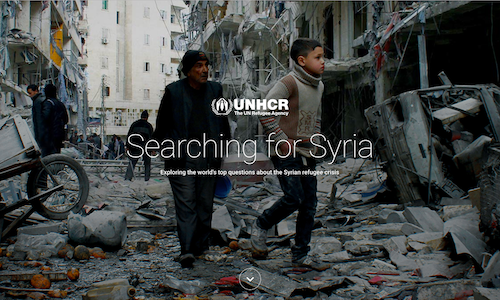 Six years into the Syrian war, the scale of the crisis is still hard to fathom, while the experiences that refugees are facing can often feel too remote for most of us to understand. Right now, more than five million Syrian refugees are facing ever-growing hardships and risks in a world that is increasingly less inclined to welcome them. Host communities in neighboring countries to Syria continue to bear the brunt of the crisis in a manner that is unsustainable. Meanwhile, the humanitarian effort for Syrian refugees continues to face critical challenges; the budget for meeting the immediate needs of uprooted Syrian families is only 17% funded.

Our goal was to tackle compassion fatigue head-on. Working hand-in-hand, Google and UNHCR joined forces to paint a new kind of picture of the Syrian refugee crisis: a picture that is accessible to greater numbers of people, and one that reflects not only of the scale of the crisis, but also its human dimensions. We hoped to break through the indifference and fear that are leading so many countries to close their borders and doors to some of the world's most vulnerable people. We wanted to offer a new entry point to help people re-engage with a staggering conflict that has displaced more than 11 million people–or half a nation–from their homes.

In short, our end goal was to catalyze empathy from audiences worldwide on the Syrian refugee crisis through the creation of a beautifully immersive digital product.

Strategy: Together, Google and UNHCR looked at ways to draw on our respective areas of expertise to produce something that neither of us could achieve on our own.

Implementation: We noted through Google Search trends that in 2016 Google users conducted 160 million searches about the Syrian refugee crisis, which has contributed to the highest levels of forced displacement globally since the second World War. Global Trends Report with Google Search trends, drawing connections between the questions that people are searching for with the UNHCR's detailed data sets. We distilled these searches into five core questions on people's minds:

• What is happening in Syria?

• Where are Syrian refugees going?

• How can I help Syrian refugees?

Next, the two organizations teamed up to combine UNHCR's Annual Global Trends Report with Google Search trends, drawing connections between the questions that people are searching for with the UNHCR's detailed data sets. We endeavored to answer each of these questions through a diverse combination of rich multimedia content in an immersive, scrollable, mobile-friendly format. Much of the content came from UNHCR's extensive storytelling work - throughout the Syria conflict while other parts came from Google and from third-parties sources.

Key Features: Collectively, the site gives visitors a factually clear and emotionally resonant way to re-engage with a tremendously complex conflict, to find ways to empathize with those fleeing its wrath, and to discover ways to take action and help. The content includes 360-degree photospheres, satellite imagery, infographics, refugee profiles, and video—including a heart-stopping documentary that follows a refugee family from their arrival on the shores of Greece all the way to the Netherlands. As a result, viewers get answers to the most pertinent questions about the Syrian war, but they also go face-to-face with a few of the millions whose lives have been turned upside down by the chaos.

Promotion: UNHCR harnessed it's social media footprint of more than 10.4 million followers to engage audiences. At the same Google featured the site on its homepage, driving millions to the microsite within the first days.

• 2 million page views, with an average dwell time of 02:42, during first month

• Generated 16,000 signatures on #WithRefugees petition, a concrete call to action to hold governments accountable for their commitments to refugees.

• Generated over 3,000 donations to UNHCR

The end result is not only a beautifully immersive digital rabbit hole you'd voluntarily fall down, but the result of the perfect marriage of two seemingly strange bedfellows. UNHCR brought authoritative refugee data, expert knowledge of humanitarian response and refugee protection alongside a rich body of multimedia storytelling to the table. While Google championed expertise in site design and development, a deep-dive of data analytics and visualization and homepage promotion that drove millions of views within days of launch.

Video for Searching for Syria 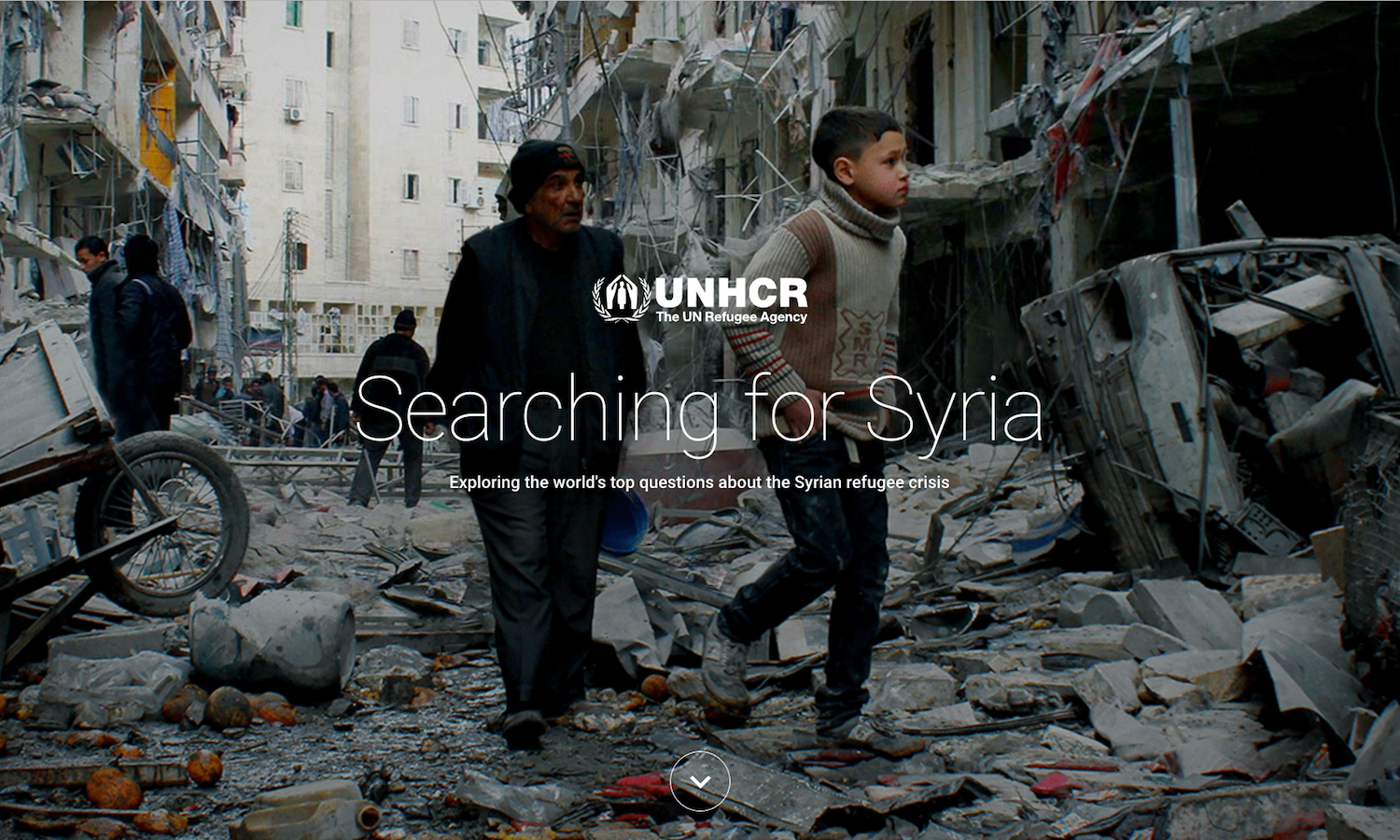