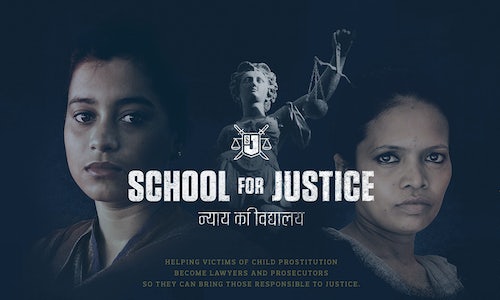 India has the most underage girls in prostitution in the world with an estimated 1.2 million children forced to work in brothels. These girls, some as young as seven, are abducted, sold to traffickers and often tortured.

Despite the magnitude of the problem, the amount of prosecutions is incredibly low. In 2015 there were only 55 legal cases that led to convictions.

Poverty, the gender imbalance, the caste system are major driving factors leading to the current situation. This subject is taboo in India, so there is little awareness of this problem. People either don't know – or look the other way.

Also, a lack of good lawyers and judges with in-depth knowledge on human trafficking and child prostitution has a negative effect on the rate of convictions.

These factors have motivated the Free a Girl Movement India to take the radical step of opening the world's first School for Justice.

The School for Justice is working with some of India's most respected law universities to train girls to become public prosecutors with the power and determination to challenge India's legal system from within – and ultimately prosecute the criminals who once owned them.

A tangible solution to a deeply rooted problem, the school itself is the campaign.

The School for Justice is not only starting a conversation around child prostitution on an epic scale, without the use of traditional media spend – but is also fundamentally shifting opinion.

The School for Justice is built to last. And the class of 2018 is already on its way.

Not just changing the conversation, but changing lives.

Our task was to raise awareness around child prostitution. The chosen strategy was to employ a controversial and taboo-breaking communication tool to get the topic talked about: the School for Justice.

The School for Justice has universal appeal, but the campaign perhaps surprisingly targets men aged between 18 and 45; because they're on the demand side of the sex industry, and are still more 'influential' in (Indian) society.

We activated traditional media to serve a broad demographic including stakeholders who could make a significant difference to the cause; and we used social media to reach a younger group, appealing to influencers such as Bollywood star Mallika Sherawat.

The campaign developed tactics to change opinions from seeing the girls as complicit in the crime - to victims of exploitation. The PR strategy employed the media to push messages across India but also showed the solution to the problem lay in supporting the cause.

For the safety of the girls the school location is a closely guarded secret.

Therefore, a press conference in Mumbai, featuring legal heavyweights discussing the challenges in the legal framework, the NGO discussing the school and the girls themselves, and attended by traditional media and India's TV stations, got the world's attention. The girls unveiling a ceremonial plaque officially opened the school delivered a photo moment – and a story – that was widely covered.

A challenge was putting the girls in the spotlight in a society where victims of forced prostitution are huddled away in the shadows, their identities blurred out, names changed. We worked with girls to help them tell their story and capture their optimism and hope. The girls are our spokespeople and featured in every single story.

The PR campaign drove organic reach, while encouraging empathy and support for victims of child prostitution.

The School for Justice has only just opened, so it's too early to give concrete results. The campaign is on-going and will span many years.

The School has universal appeal with interest from all corners of the world and the (social) media landscape. From the Guardian to Upworthy, from the man in the street to Malala Yousafzai's foundation, response to the School for Justice is significant.

The primary challenge was to get very taboo topics around child prostitution and the impact of gender imbalance and caste, openly discussed in Indian media and amongst the public. This topic is notoriously ignored by the press and public alike.

However, first responses have been extremely favourable with an incredible response from the national press in India and international press and endorsements from the UK's Law Society, the Geena Davis foundation and the world's youngest ever Nobel Prize winner, Malala Yousafzai's foundation .

Public reaction across social media has been strong. For a topic that's previously been left unspoken, India got vocal. Very vocal. The levels of engagement from the target audience are incredibly high.

The School for Justice will be a real success when the first girls are public prosecutors and the first of the criminals who once owned them behind bars.

But the first class of many has started and with this the School for Justice is already rebuilding lives and empowering the girls to be a new kind of role model as the next generation of leaders in their field.

Video for School for Justice 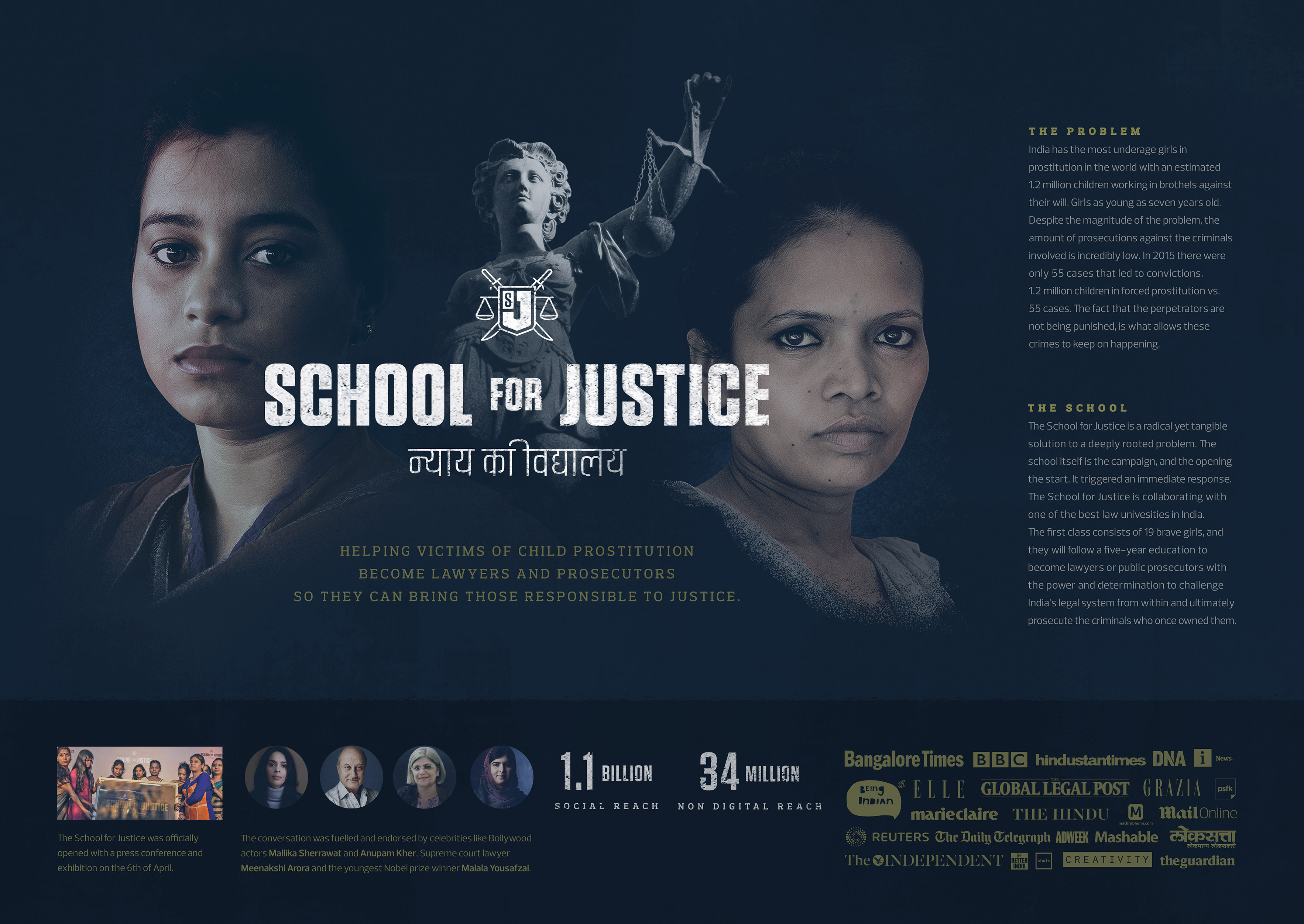 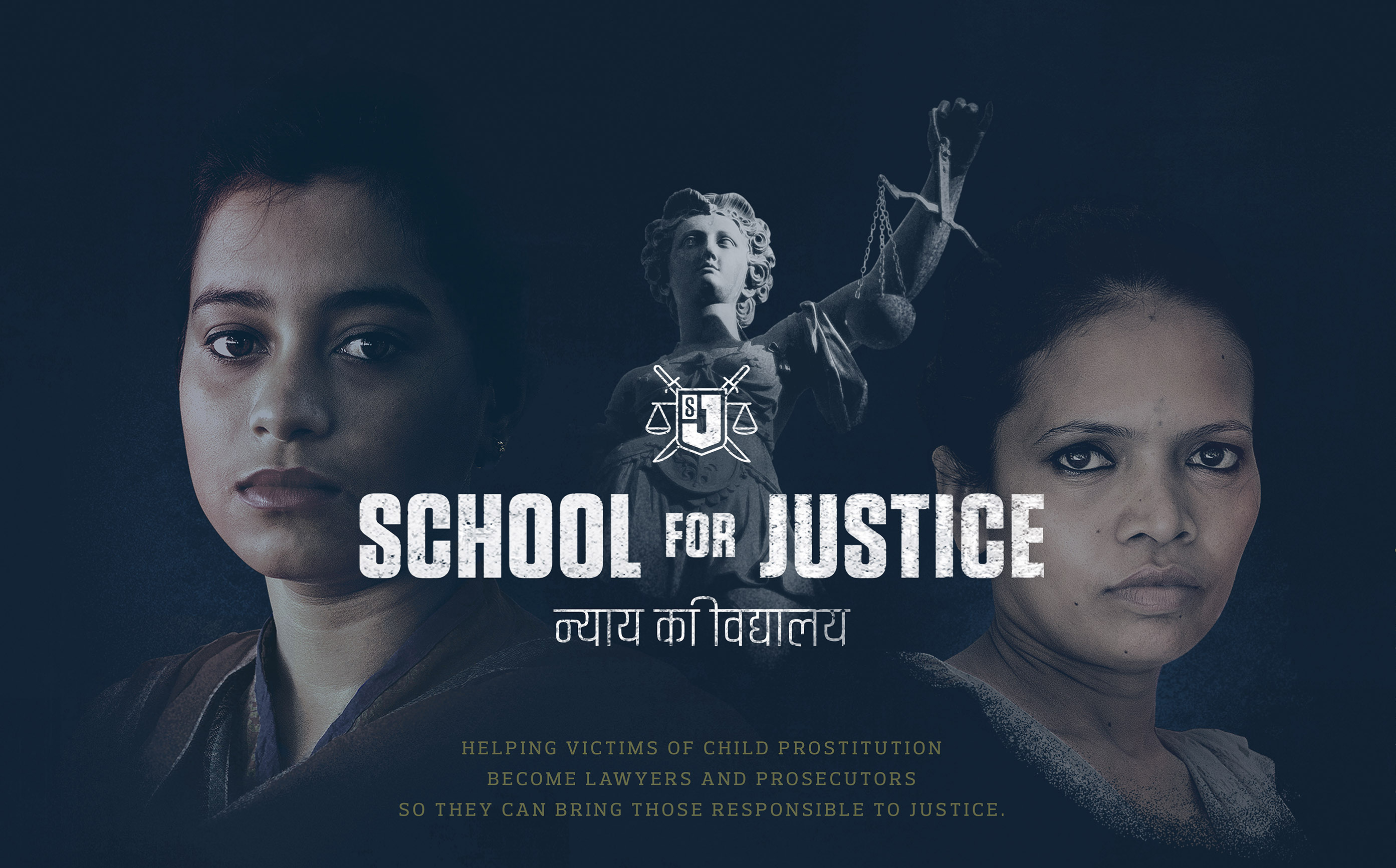