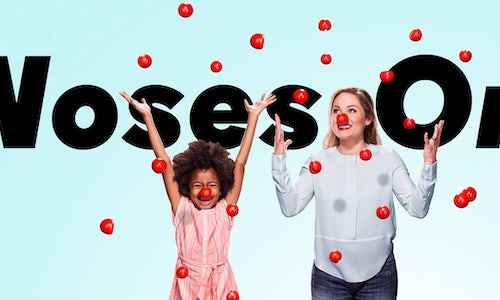 Red Nose Day is the charity fundraising campaign that has taken America by storm. Red Nose Day started in the UK in 1988, built on the idea that the power of entertainment can drive positive change. Since then, it has raised over $1 billion globally.

Red Nose Day offers a fresh approach to long-standing issue by making it fun to come together and make a difference, and by using entertainment as an "on ramp" to a serious cause. Red Nose Day launched in the US in 2015 with a mission to help end child poverty at home and around the world. The 2017 campaign spanned six weeks leading up to May 25.

At the outset of this third annual campaign, consumer research showed that while the brand was well-known to consumers, most did not fully understand the cause that Red Nose Day was supporting. The team at Comic Relief Inc. saw closing this understanding gap as essential to building and growing a community of effective advocates.

Red Nose Day continued to push boundaries in the US in 2017 through an evolved creative and messaging approach, and through dynamic multi-platform executions that spanned broadcast, digital, and offline.

Through our 2017 campaign we sought to solidify Red Nose Day's presence in the US while delivering increases in:

Together, these factors lay a foundation serving as a gateway to giving for Americans who support the effort to end child poverty.

Red Nose Day 2017 brought Americans together with one rallying cry: "Noses On." It was the first time consistent messaging was used across both owned and partner activations, including with NBC, Walgreens, and M&M'S.

"Noses On" highlights the iconic Red Nose and intuitively communicates a clear call-to-action: to join the movement, buy your Red Nose and wear it proudly. The short line also indicates that there is more to do than only wear the nose. Acting as a battle cry, "Noses On" communicates action, prompting supporters to get more involved. This was often supported by a secondary phrase, "Let's come together to end child poverty, one nose at a time," which indicated both the method for engagement and specific goal of our campaign.

To match, a new, exuberant visual identity was developed for use across all owned channels, communicating the playful tone of the brand on the website, in social media, and beyond. More than 50 pieces of content were created, communicating the brand's tone while supporting efforts to further brand understanding and directly encourage participation.

Capitalizing on Red Nose Day's roots in humor and entertainment, several other key partnerships helped carry Red Nose Day's message far and wide including Snapchat (where Red Nose Day had a custom national Lens), 9gag, Reddit, and WatchMojo. We also worked with numerous talent across social media, helping to raise awareness of the brand, the cause, and encourage participation. Across the six-week campaign, thousands of individuals, schools, and companies joined over 150 digital influencers and celebrities who got involved by buying and wearing the official Red Noses and helping to "spread the red" on social media and donating millions of dollars.

Red Nose Day has established itself as a gateway of giving, and a platform that brings millions of Americans together through fun and entertainment for a great cause. It's successfully demonstrated a fresh approach to charitable fundraising.

Campaign social media earned over 4.6 billion impressions, and reached over 60 million unique users across the country on Facebook alone. Message cut through with consumers was outstanding, and consumer research suggests that brand understanding tripled thanks to our new, aligned communications approach.

Overall, Americans raised over $38 million over the course of the campaign. Red Nose Day has now raised over $98 million in just three short years to fund programs that help children in all 50 states and around the world.