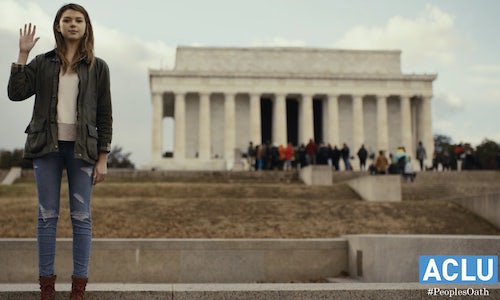 For nearly 100 years, the American Civil Liberties Union has been the nation's champion for freedom and justice for all. Their objective is to inspire and empower Americans to take part in our democracy. Today, we are living in the Divided States of America, and the ACLU are needed more than ever.

Our campaign work with the ACLU centers around three core ambitions: building the brand, addressing a new generation of activists and deepening relationships with current members. The ACLU has transformed into a professionalized nationwide organization over the years, but amidst these changes, one thing has remained the same: a strong membership base.

The framework of the campaign was then built around the beliefs that the ACLU:

The campaign was launched on January 16th 2017, coinciding with an extremely significant moment in history - the Inauguration of the 45th President of the United States, Donald Trump.

Enter our work with the ACLU - The People's Oath.

The Pub, the content strategy and publishing practice of innovation and growth accelerator, co:collective, developed a Quest for the ACLU - We The People Dare to Create a More Perfect Union.

Using the Quest as our guiding principle, the People's Oath initiative was designed to build a new generation of civil rights and liberties activists by inviting the public to stand up and take action alongside the ACLU in all 50 states. The goal of the campaign was not just about getting more donations, but rather about uniting a community of audacious doers in pursuit of a fair and just America.

To engage current members as well as activate new members, we launched The People's Oath, a generator that allows every American to take an oath alongside our President Elect on Inauguration Day to commit to preserving, protecting and defending the rights guaranteed by our constitution. By visiting PeoplesOath.org anyone could create, swear and share their own personalized oath. After citizens shared their oath on their social channels with the hashtag #PeoplesOath, they were invited to sign up for the ACLU emails and follow the organization on Facebook and Twitter.

We produced digital films to inspire Americans to take their own oaths. The films feature individuals from diverse backgrounds; standing in front of the Lincoln Memorial, they raise their right hand and resiliently make their pledge to camera. Just like the Presidential oath of office, the People's Oath begins with "I do solemnly swear to preserve, protect and defend the Constitution of the United States", with users able to personalize the end with their own pledge. The platform engaged a new generation of activists; by turning their smartphones into megaphones, people finally had a tool to share who they were and what they believed in.

The ACLU is ready to redefine membership and the Oath was the first step. They hope to evolve from an organization of lawyers fighting for the people, to a coalition of lawyers and members fighting together, for everyone. To become the place where people can go, no matter what political party they're into, to courageously take action. To inspire those who want change, to become the ones that make change, and to remind citizens that it is WE THE PEOPLE who give the Constitution its power, and it is WE THE PEOPLE that can make an impact. The People's Oath generator empowers American's of all ages and races to participate, preserve, protect and defend the Constitution of the United States.

1.5 million people watched the film. 415,000 visited the site. 250,000 tagged #peoplesoath. It was picked up by news outlets everywhere, with numerous online mentions from Fast Company, Los Angeles Times, Deadline, Yahoo! News, Mashable, Elle, Upworthy, Fusion and Reddit, to name a few. Successfully, the Oath met its objectives: while building ACLU brand awareness, engaging its members and educating fringe supporters, the ACLU united communities with a shared purpose of protecting the Constitution. To not be an observer, but a participant. To be a change maker. 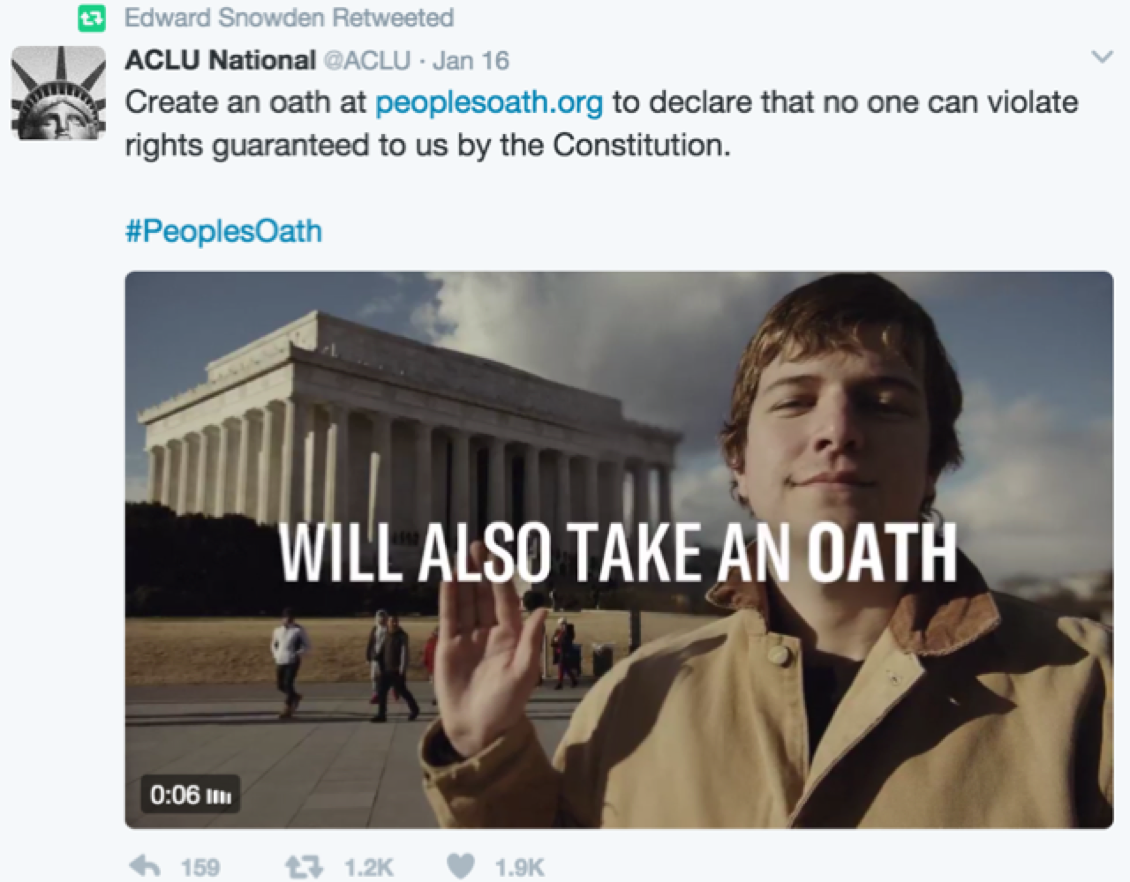 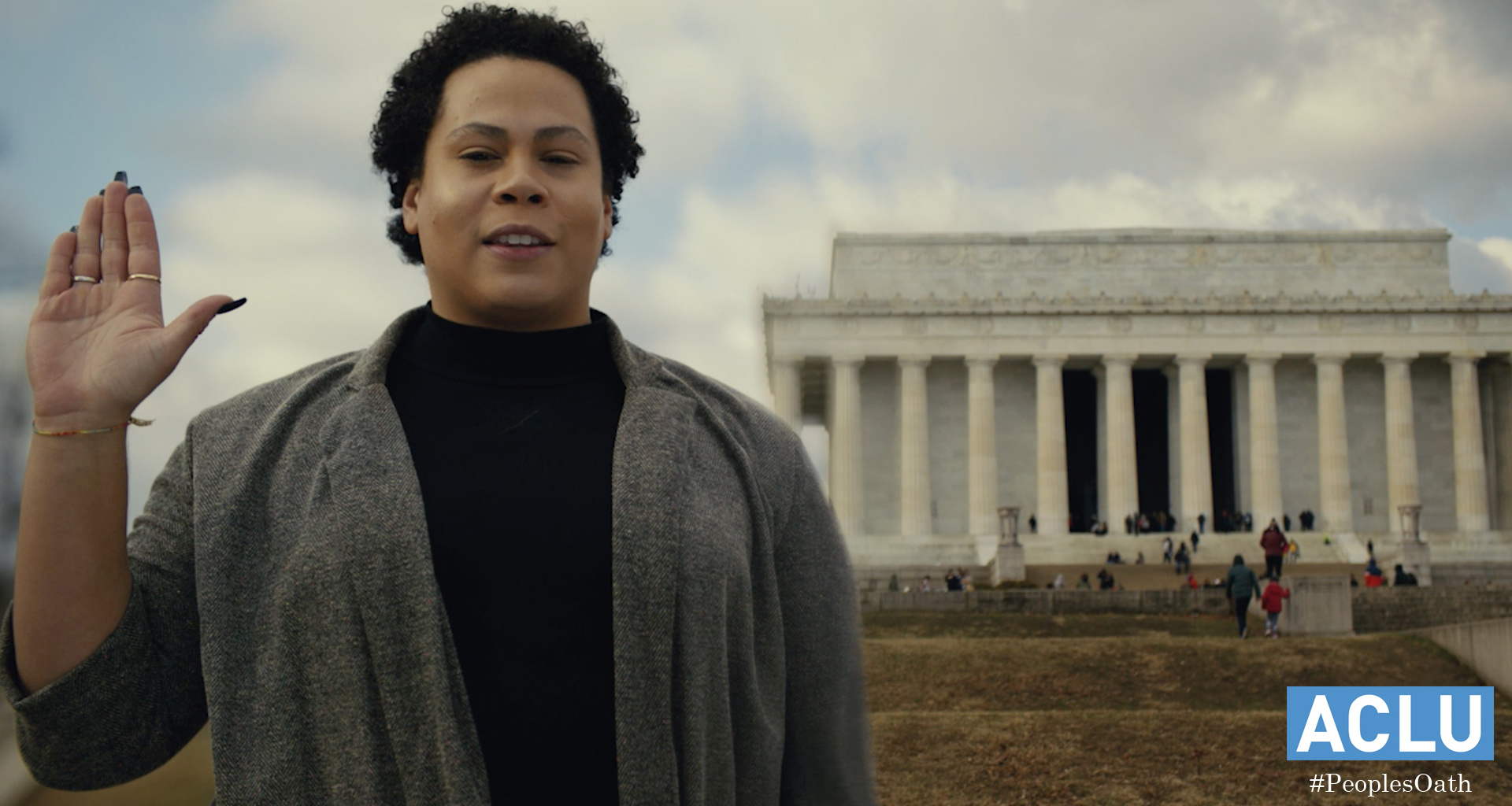 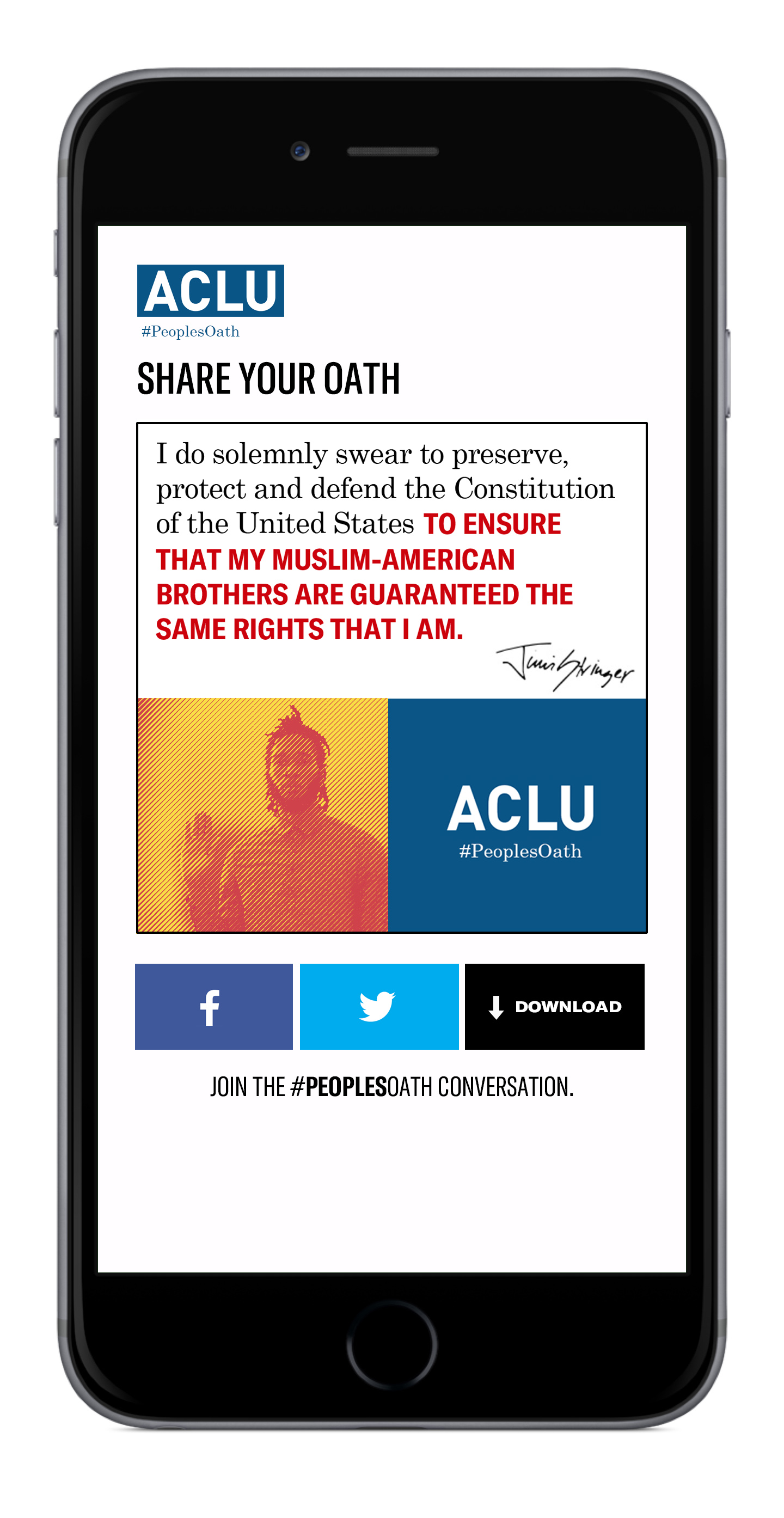 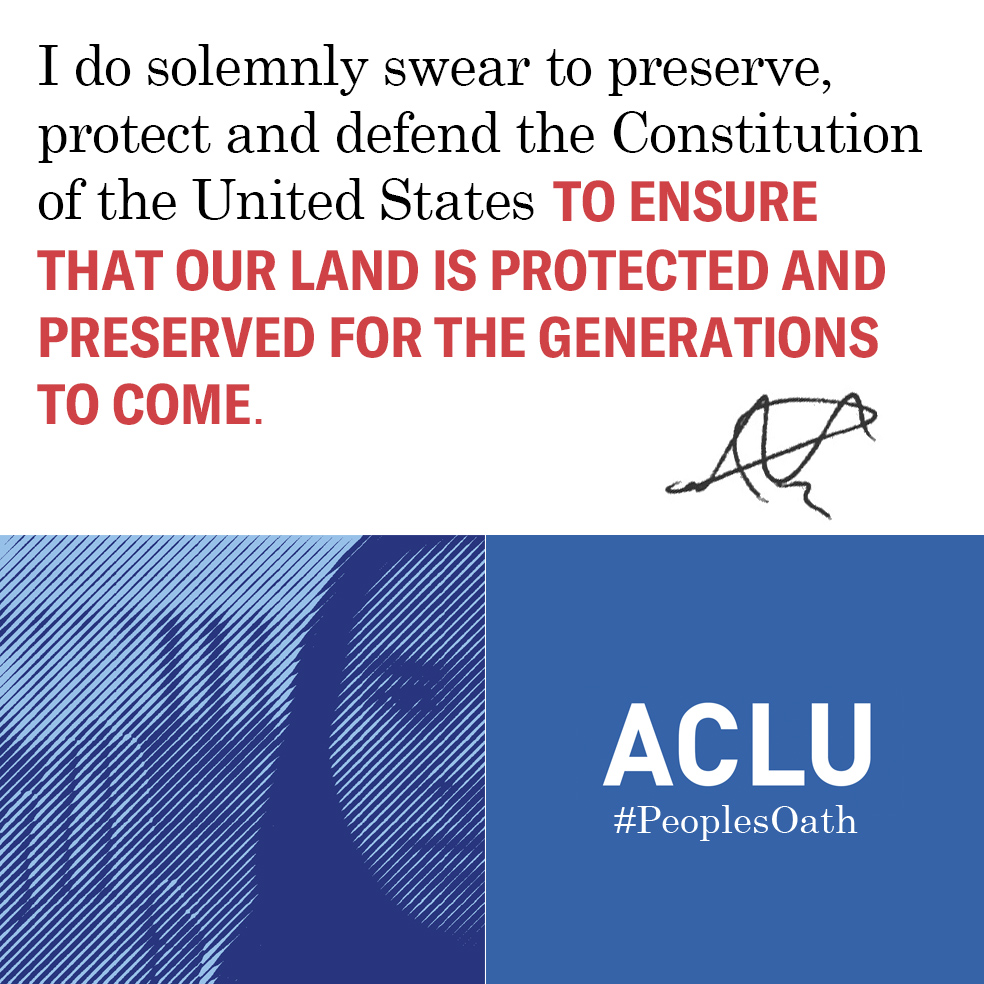 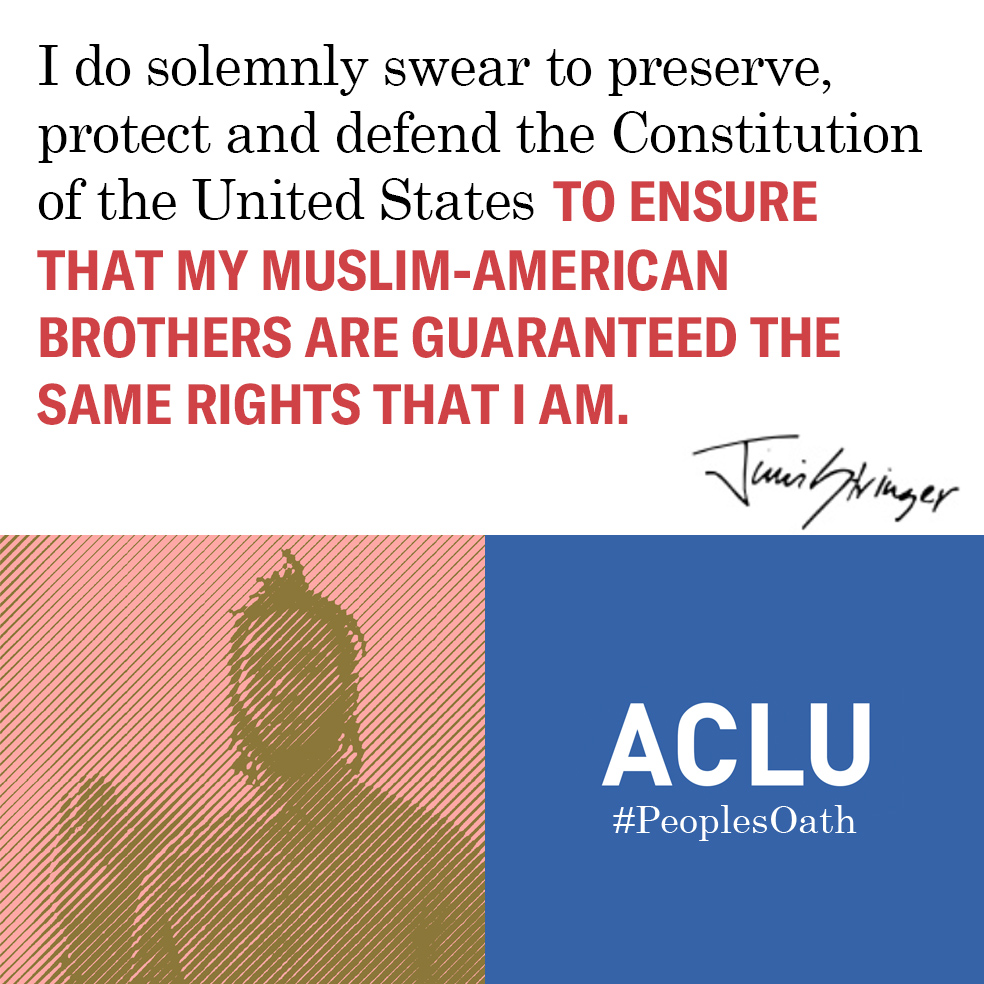 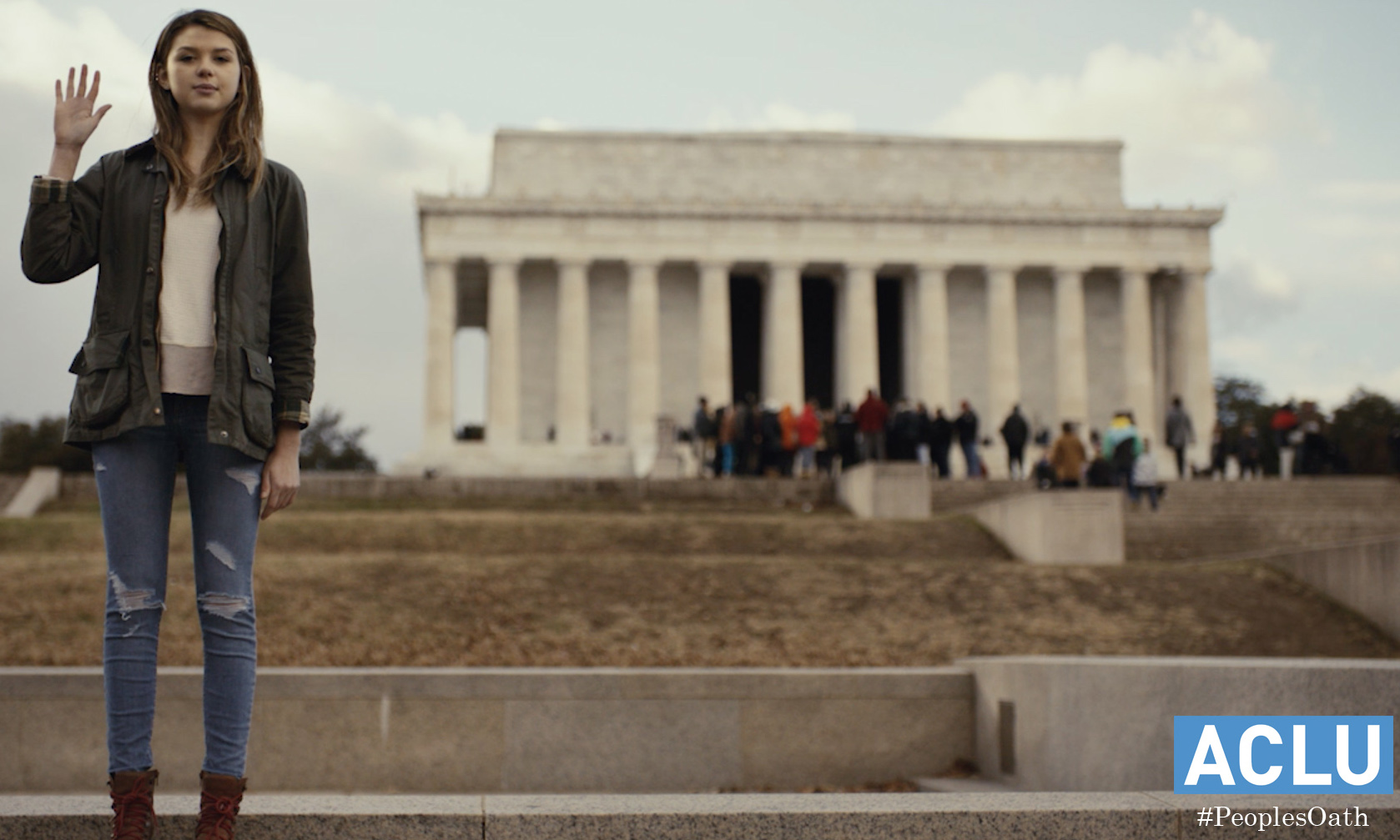